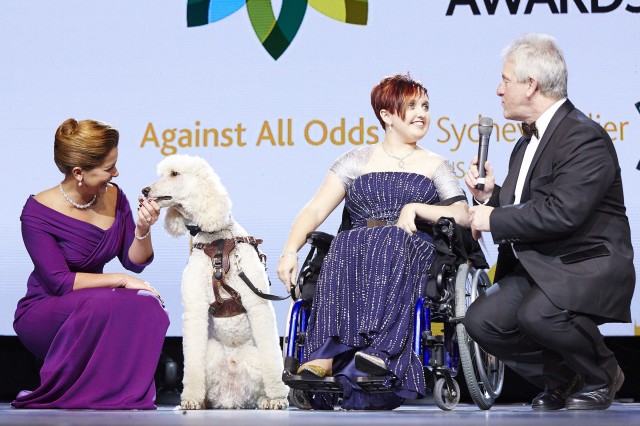 The FEI recognized Paralympian Sydney Collier and her dog Journey with the Against All Odds award.

In her final ceremony during her tenure as FEI President, HRH Princess Haya presented five awards to equestrian heroes at the FEI Awards Gala at the Buta Palace on the Caspian Sea. One of those equestrian heroes, though…happened to be a Poodle.

Journey the service dog and his owner, Paralympian dressage rider Sydney Collier, won the “Against All Odds” award jointly to recognize their amazing achievements.

Seventeen-year-old Sydney has a rare congenital condition called Wyburn–Mason Syndrome that has forced her to undergo several brain operations, blindness in one eye, and paralysis on the left side of her body, but she has been involved with horses her whole life. She competed in eventing and showjumping until a stroke in 2009 forced her to change her focus–but not her drive to excel. She is a Grade 1b Paralympic dressage rider, meaning that she competes in dressage classes with other riders who are “Mainly wheelchair users with poor trunk balance and/or impairment of function in all four limbs, or no trunk balance and good upper limb function, or moderate trunk balance with severe impairment of all 4 limbs,” according to the FEI classification.

Sydney was the youngest Paralympic dressage rider this year at the World Equestrian Games in Normandy, placing 13th for the team competition and 9th in the individual. This year the USEF also recognized her as 2014 Junior Equestrian of the Year.

Journey had his moment in the spotlight too, since he was the first-ever canine to receive an FEI accreditation badge:

“It means even more to me to have my special service dog Journey by my side to accept this award,” said Sydney Collier at the gala, “When Journey was granted his credentials at the Alltech FEI World Equestrian Games a world of opportunity and education was opened. Together Journey and I are now able to share with others the special working relationship and independence that service animals grant their handlers. The icing on the cake? Journey loves horses as much as I do!”

Journey assists Sydney at home and in the barn by carrying things for her, turning on and off lights and running for help when necessary. He also loves to give her horse Wentworth kisses and feed him his daily banana!

With these successes under her belt, Sydney is hopeful of making it to the Rio 2016 Paralympics. But she couldn’t do it without the help of her service dog, who helps make life a little easier for her day by day. Sometimes it is really all about the Journey.