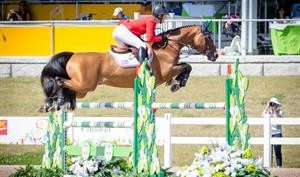 The third and final equestrian competition of the Pan Am Games is well underway in Toronto, and the US team’s already posted four clear individual qualifying rounds.

Caledon, Ont. – The final equestrian competition of the 2015 Pan American Games got underway this afternoon with jumping’s first individual qualifier. The U.S. Jumping Team of Georgina Bloomberg, Kent Farrington, Lauren Hough, and McLain Ward got off to a solid start, posting four clear rounds.  The U.S. was one of only two countries to have all four of their athletes post clear rounds, in addition to Canada. The U.S. will remain last to go in the order for Thursday’s Nations Cup where all teams will begin on a score of zero. The U.S. athletes will ride in the following order:

Trailblazing for the U.S. was double Olympic Gold medalist McLain Ward (Brewster, N.Y.) and Sagamore Farms’ Rothchild, the veteran pair left all the rails up and crossed the timers in 75.71. Speaking to his ride, Ward said, “[Rothchild] jumped really well, a little fresh. It is a bit breezy this afternoon, but we certainly are working backwards from the weekend and he was fresh, but certainly had enough jump in him.” Currently ranked fifth in the world, Ward is aboard one of his more seasoned partners in Rothchild, feeling that the gelding was ready to go and do the best job, noting that, “The Pan American Games, whether we have to use it for a qualifier [for the Olympic Games] or not, is an important event. It’s important for the country and the move towards the Olympic Games next year.”

All U.S. and Canadian riders jumped clear in today’s round at the #PanAmGames! Here’s Mclain Ward and Rothchild. pic.twitter.com/QMyeqCyHeR

Competing in her first Games, Georgina Bloomberg (New York, N.Y.) and Gotham Enterprizes, LLC’s Lilli, jumped an impeccable round in a time of 75.02. “My horse felt really good, she has had a nice build up to this with a little rest and a little preparation at Spruce Meadows. This is my first championship so I was a little bit nervous, but she’s a pro at it and carried me around,” said Bloomberg.Having competed on multiple Nations Cup teams for the U.S., Bloomberg brings a wealth of experience, but notes that competing on her first Games team is, “incredible, this was my main goal for the year… to be coming in confident and ready is a huge relief and it is just an honor to be a part of the team.”

Lauren Hough (Wellington, Fla.) expertly guided The Ohlala Group’s Ohlala to a clear round in a time of 75.82. The speedy mare lives up to her name, as Hough stated, “There is definitely something very special about her, I think she knows that. This is her first championship so she’s got a bit to prove, but I think it’s a nice introduction for her for hopefully a big future to come.”

Capping off the foot-perfect U.S. effort was Kent Farrington (Wellington, Fla.) and Robin Parsky and his own Gazelle. The young mare made light work of the Michel Vaillancourt-designed course, coming home clean in 79.73. “It is a long week of jumping so this was a nice start to the Games,” said Farrington. “Gazelle is still a green horse so this will be a good learning experience for her and hopefully she can go out there and produce good results. We have a really solid team around us with a lot more experienced horses than her, as a group we are really strong.”

The Nations Cup gets underway at 10 a.m. ET Thursday. The competition will be broadcast live in the U.S. on ESPN3 and WatchESPN. (This is the first equestrian event that will be live-streamed in the US.)