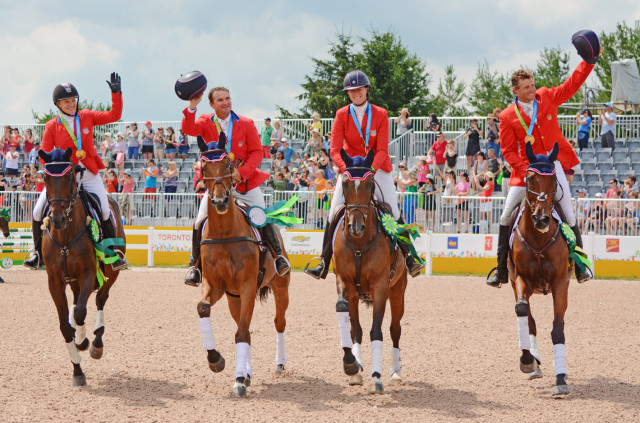 It was a great day for American eventing at the 2015 Pan American Games with Team USA staking out the top spot on the podium and Marilyn Little clinching Individual Gold.

For complete Pan Am Games eventing coverage including a thorough play-by-play of yesterday’s thrilling conclusion and on-the-scene commentary, visit our sister site Eventing Nation. In the meantime, here’s a synopsis of yesterday’s show jumping competition via a USEF press release.

Caledon, Ont. – The United States Eventing Team finished a stellar week of competition at the 2015 Pan American Games held at the Caledon Equestrian Park in Ontario, Canada. Superlative efforts by Philip Dutton, Lauren Kieffer, Marilyn Little, and Boyd Martin resulted in a Team Gold medal and a berth at the 2016 Olympic Games. Adding to their accolades, Little was awarded the Individual Gold medal.

First to cross the timers for the U.S. was Dutton on Thomas Tierney and Ann Jones’ Fernhill Fugitive. An unlucky rail at fence two caused the crowd to hold its breath for the remainder of Dutton’s ride. The rest of the rails stayed in the cups, adding four faults to his cumulative total, finishing on 52.40.

Explaining his round, Dutton said, “I think I might have been a little bit quiet there [at fence two], he didn’t even hit it very hard, but it did come down unfortunately. It was fortunate that we didn’t need that [score], but the rest of his round was good.”

The pressure was on the rest of the team as Kieffer entered the arena next on Marie Le Menestrel’s Meadowbrook’s Scarlett. The young mare again handled the electric atmosphere well, leaving all the poles up within the time allowed.

“I’ve had her since she was four and rode her in her first event. Every step of the way she has bumped up and just thinks it’s fun,” said Kieffer of the classy mare. “She was great out there today.”

Martin and the Pancho Villa Syndicate’s Pancho Villa completed the track handily for a score of no faults. Speaking confidently about his partner, Martin said, “I’m on a very good jumper, he felt fresh this morning, warmed up good, and jumped around pretty well. He is a three-star horse so I thought he should jump clear.”

With Brazil at the heels of the U.S team, all eyes were on Little as she entered the ring on Raylyn Farms Inc. and Phoebe and Michael Manders’ fiery mare, RF Scandalous.

Little was in second place going into the stadium phase adding to the pressure to perform. With a lifelong background in show jumping, Little mastered the course perfectly. With the leading Brazilian rider dropping a rail at the last fence on course, Little was secured of an Individual Gold.

“Nothing really compares to a day like this,” said Little. “This is my first major games and this day is indescribable. It’s a great day for all of us and the people supporting us who made it happen. [RF Scandalous] was everything that I hoped she would be and that we know she can be. She’s a very special horse and a pleasure to work with. She shows up for work and really loves her job. She was exceptional this weekend and I am really proud of her.”

Three cheers for Team USA and Marilyn Little for winning team AND individual GOLD at the #PanAmGames today! Full report to come on EN. #goldfordays 🇺🇸🇺🇸🎉🎉🎉

Marilyn Little had two gold medals around her neck at the conclusion of the #PanAmGames A photo posted by Eventing Nation (@goeventing) on Jul 19, 2015 at 7:51pm PDT

At the end of the team competition, the U.S. won Gold, Brazil won Silver, and Canada won Bronze.

Individual medals were awarded to Little as the Gold medal winner, Jessica Phoenix of Canada as the Silver medal winner, and Ruy Fonseca of Brazil as the Bronze medal winner. Martin placed fourth individually on 44.30, Kieffer seventh on 48.40, and Dutton in 10th on 52.40.

As the first team medal for O’Connor as the U.S. Eventing Chef d’Equipe, O’Connor noted, “I have a belief in the program. We wanted to change some things when we started this program – attitude and belief; belief from the riders, from the public, and from the eventing community as a whole. I think step by step we’ve done that.

“To have these guys perform the way they performed this weekend, they were very professional and had great comradery, and with the help of everyone behind the scenes it was an exceptional effort. It showed that a system that’s built like this, with belief, belief in each other, and huge respect for each other, that you can really win in the end. We let these guys prove what they can do, we all know they can do it and believe in them as riders. We’ve seen great performances out of all of them and to put it all together in one weekend, that’s what these championships are all about. It was a joy to watch them.”

A passionate Martin said after the Team Gold win, “I’ve been in this racket for the last 20 years and have never gotten a medal. This is my first medal and we had to fight for it pretty hard. I have to say it is a rewarding feeling. I’ve been trying for this for a long time and I’ve finally got it. Team USA has the best support system with Joanie Morris as team leader, Dr. Susan Johns who is an unbelievable vet, Steve Teichman who is a genius farrier, and David O’Connor as our coach.”