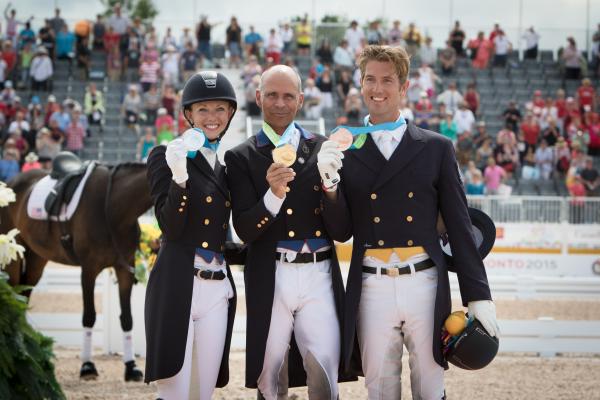 After clinching Team Gold, the USA packed a one-two punch in the individual dressage competition at the Pan American Games.

Edited from a USEF press release:

Caledon, Ont. — The United States Dressage Team bids a fond farewell to the Pan American Games as they depart the Caledon Equestrian Park with Team Gold medals, an Individual Gold medal for Steffen Peters and Legolas 92, an Individual Silver medal for Laura Graves and Verdades, and a 2016 Olympic Games berth in Rio de Janeiro, Brazil. The week was marked by team success, invaluable experience, and ambitious optimism about the future

Speaking to the highlights of the test, Peters said “He kept the cadence from the passage and the piaffe felt huge, the passage in the half-pass felt just as big as the half-passes on the straight line, his changes were clean, and he did not make a mistake — that in itself is a huge highlight for Legolas.”

Peters and Legolas 92 have the distinction of earning both Team and Individual Gold medals at these games. In addition, Peters won the Team and Individual Gold medals at the 2011 Pan American Games on Weltino’s Magic. FEI World Equestrian Games and FEI World Cup veterans, Peters and Legolas 92 are beacons of U.S. dressage achievement. “I had to work today, he was very relaxed, and I gave it all,” said Peters. “This is just like the Olympic Games, there is no difference. From this morning, I had that mindset – we have to do this, we have to bring it home. Legolas gave it his all; he was just as good [today] as he was in the Grand Prix on the first day [Saturday]. What an awesome feeling, I am so extremely proud of him. For him to finish the season like this, it is just fantastic.”

The final combination to appear in Individual competition was the consistently successful team of Graves and her own Verdades. Always competitive in the best of company, they performed with characteristic accuracy and animation to achieve a score of 79.825% and earn the Individual Silver medal.

“Today we went in and did the best we could, it’s for yourself, so even though I am not as high as I was on Sunday, I am so thrilled to have another American on the top of the podium and a Canadian who rode extremely well this morning in Bronze,” said Graves of her Silver medal finish. “The highlight for me this week was really our Team Gold — that is what we came here for. To finish with a Silver medal next to Steffen is amazing.”

Kimberly Herslow and Kiroli Enterprises LLC’s Rosmarin were the first U.S. combination to enter the arena. Having achieved personal best scores on Saturday and Sunday, the pair produced a solid, though less precise, performance and earned a score of 73.175%.

Explains Herslow, “My horse ran out of gas today. I think we did a super warm-up, but a shorter one would have been better. He still tried for me; he got flustered after the first mistake [in the first pirouette] and it just compounded after that because he does not usually make mistakes.”

Herslow was proud of her efforts on behalf of the U.S. team. “I am still ecstatic about our prior two days competing for the team, and bringing that Gold back to the U.S.”

Chef d’Equipe Robert Dover praised the efforts of his human and equine athletes and is excited about their prospects. “I could not be more thrilled and proud of my riders and everybody that contributed – their horses are obviously incredible. I am very hopeful that the depth in our country will continue improving and will be prepared to contend for a medal in Rio [at the Olympic Games].”

Canada’s Chris Von Martels and Zilverstar earned the Individual Bronze medal with a score of 79.500%.