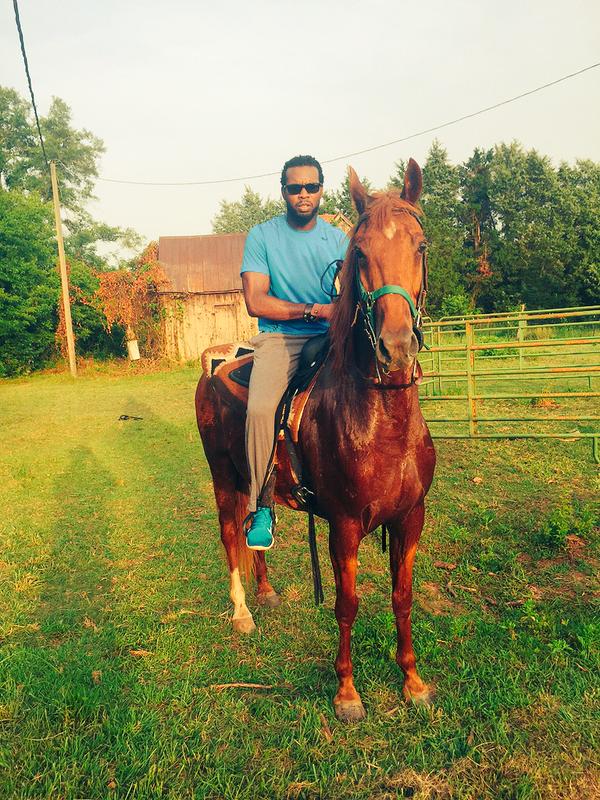 Poking fun at football is a time-honored Horse Nation tradition (unless you’re talking Budweiser Clydesdale Super Bowl commercials, in which case we’re definitely paying attention), and admittedly we haven’t always been the nicest about it. I’m thinking about the time I ignorantly sat through a Colts/Broncos game, refusing to pay attention to anything except the team names, or perhaps that video from Auburn University of the disaster that was a college football player’s first attempt at riding a horse. But don’t worry, I’m fully prepared to eat my words and salute our newest celebrity equestrian, the Carolina Panthers’ own Josh Norman.

At the end of his fourth professional season, Norman bought himself a horse. And because a celebrity’s horse should be just as much a celebrity in its own right, Norman opened up a Twitter account for “Delta 747,” known around the barn just as Delta. His Twitter bio: “I Am The Noble Steed of @J_No24, I’ve been tried & Battle Tested! my Owner Bestowed The Name Honorable ‘Delta747; Because I’m 16.5H & My Hooves are on Fire!”

Alright, so while Norman’s grasp on how to measure a horse’s height in hands may be a little lacking, we can’t fault him for trying. This ain’t his first rodeo, actually: according to an interview with the Charlotte Observer, he grew up riding horses with his family in his hometown of Greenwood, South Carolina. He owns three of the family’s thirteen horses in South Carolina, as well as Delta who he boards in the Charlotte area. Delta is reportedly an eight-year-old Saddlebred, and Norman rides him simply for fun (though he mentions that getting involved in the racing industry isn’t out of the question in the future.)

Josh Norman, welcome to our equestrian ranks! We’re happy to have you.