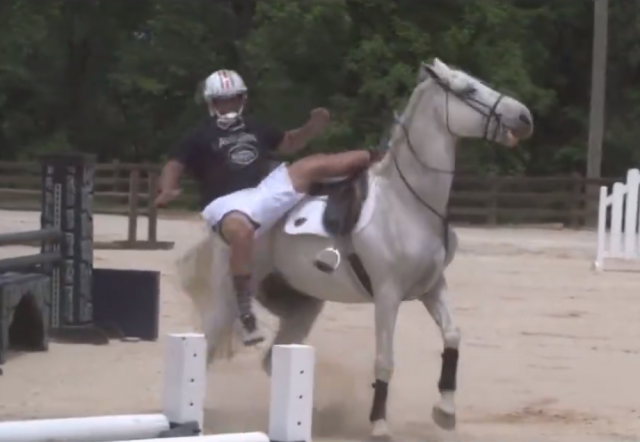 Yep, they put a football player on a horse. And nope, it doesn’t go well.

As an NCAA Division I school, Auburn University of Alabama takes its athletics pretty seriously — but not so seriously that the teams couldn’t get together to try something new, like, say, each other’s sports. The Auburn Tigers, the Facebook page for Auburn’s athletics, released a four-video series featuring entertaining vignettes of student-athletes trying out a new sport while still holding on to their own.

Auburn Sports Collide No. 3Enjoy your Friday even more by watching this series! What happens when Auburn student-athletes cross over from their sport to another? Here’s Video No. 3 showing sports collide. WAR EAGLE!

Pretty funny, and a unique way to show your student-athletes working together. Lots of colleges and universities are trying to implement programs and incentives to encourage their sports teams to support each other, but none have done it in such a way as Auburn.

Well, until they tried the equestrian-meets-football chapter:

Auburn Sports Collide 4What a finish! Watch what happens when Auburn student-athletes cross over from their sport to another with video No. 4 in our series. WAR EAGLE!

That’s gonna hurt in the morning. He fell so hard that his SHOE FELL OFF. I mean, sure, he wasn’t wearing the proper footwear, but holy OUCH. The ladies on the football field fared much, much better, though I did laugh at loud at the fact that their perception of football is basically the same as mine: namely, the guys throw the ball around a little bit and then spend a lot of time dancing around in the end zones smacking each other.

Naturally, the poor football player who had to try horseback riding is getting some flak on the Auburn Tigers’ Facebook page as holier-than-thou equestrians pick apart his riding apparel and lack of balance (because, you know, it was his first time on a horse) and bemoaning the state of that poor horse’s mouth, forgetting, of course, that they were once beginners themselves. In the spirit of intersports cooperation, let’s instead just sit back, applaud this young man’s valiant attempt, raise a toast to Auburn’s athletic department and be satisfied in the fact that at least for one university, athletes are gaining a new respect for each other’s sports of choice.