OK, I may know nothing about football, but this really seems like a win-win situation.

First, let me publicly admit that I am woefully ignorant about football. I mean, I know which teams are actually playing in the Superbowl — usually. I know the point values of a touchdown and a field goal. I happen to live in western New York, which means that I’m stuck rooting for the Bills (who shockingly have actually had a halfway decent season as far as past records are concerned.) I had a brief stint as a mounted mascot for my alma mater, and relied heavily on ground support to tell me when something exciting had happened. Beyond that, my knowledge of football is pretty lax.

This sums up my football experience, generally speaking:

BUT. Last night, I caught a few moments of a game at my in-laws’ house, where “the game” is always playing on Sunday evenings. It was the white team against the orange team — actually, the Colts against the Broncos. And wait a minute — those are my go-to teams to cheer for, thanks to their very horsey mascots. (Well, OK, there are the Cowboys — but I grew up in Philadelphia and there’s no way I would ever find myself cheering for DALLAS.)

I let the game wash over me, vaguely aware that one side appeared to be winning, but my thoughts were really more concerned with colts and broncos. Interestingly, Peyton Manning (quarterback for the Broncos) was formerly the quarterback for the Colts. This wouldn’t be unheard of in the horse world — there are a few colts that just never really settle in to being started as a riding horse, and some of those colts might actually end up in a rodeo roughstock string. Colt to bronco. Good work, Mr. Manning — if you had gone in the other direction we’d all be really confused.

Honestly, the game just didn’t captivate me… so I started keeping my own score of who should win the Horse Nation Bowl between the Colts and the Broncos. Two equestrian-themed teams in a head-to-head match-up of completely arbitrary statistics? Now that’s my kind of sport.

The Broncos feature a lovely gray Arabian gelding named Thunder (we’re currently up to Thunder III, played by a gelding named Me N Myshadow) who does a victory gallop from end zone to end zone at home games whenever the Broncos score. He also leads the team out onto the field at the beginning of games. 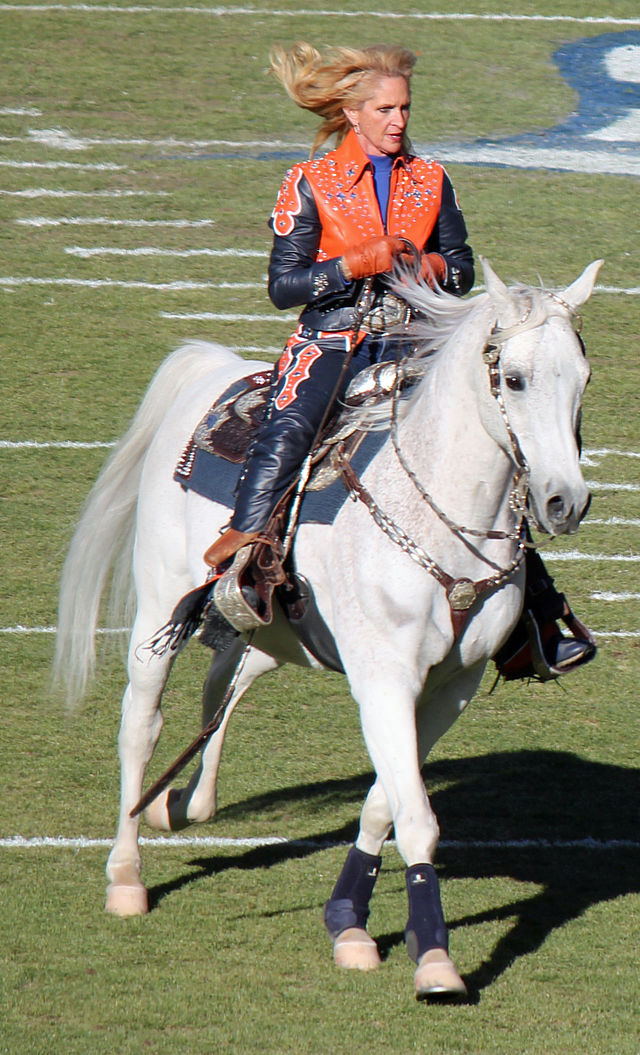 Meanwhile, the Colts have this terrifying blue horse suit: 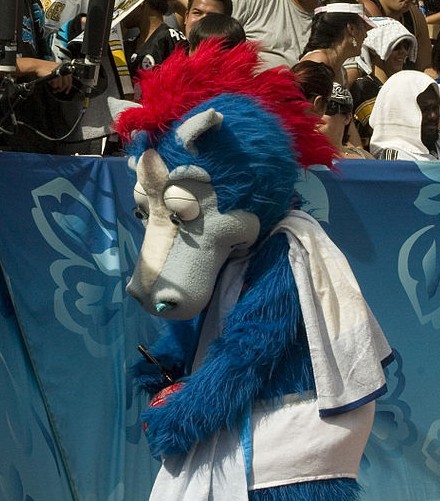 That looks like a point for the Broncos. (Run, Thunder, run.)

In the Broncos’ home stadium, the scoreboard is topped with a giant fiberglass-and-steel statue of a rearing horse. This statue is actually cast from the same mold as Roy Rogers’ Trigger, but the Denver version is called (dreadfully) Bucky Bronco. He’s capped both the old and the new stadium since 1975 and stands an impressive 27 feet tall, weighing in at 1600 pounds. Outside the new stadium, the south entrance is graced with this lovely sculpture/water feature by Sergio Benvenuti called “The Broncos.” The Broncos website describes the sculpture as including “five broncos, a mare and a foal.” 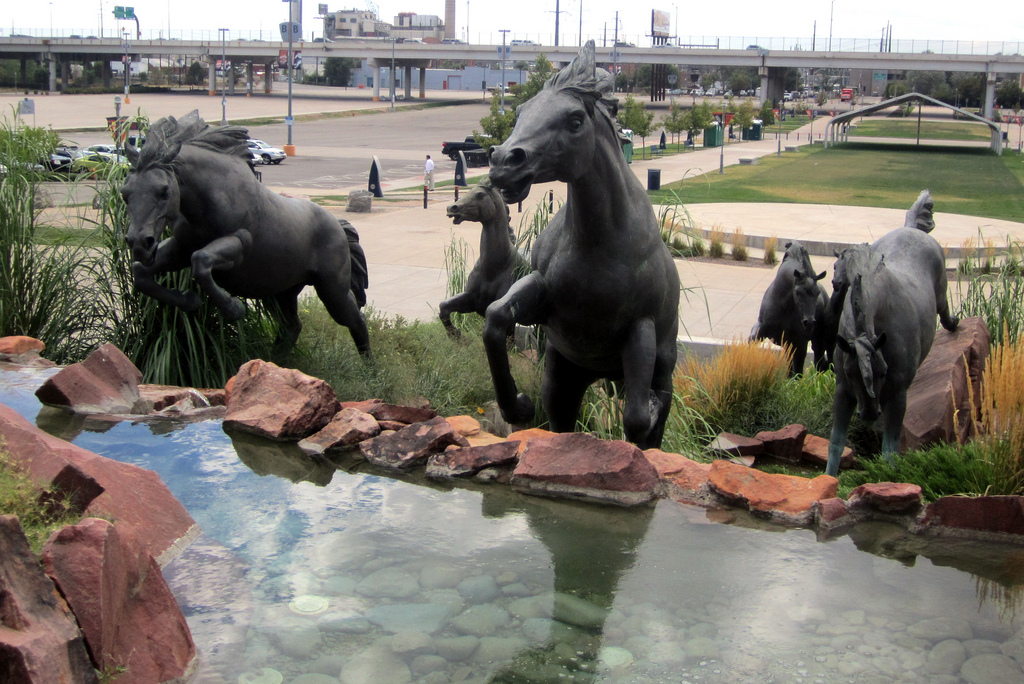 The Colts’ stadium includes… nothing.

So we’ll give Denver another point for Bucky Bronco and a point for “The Broncos,” but there’s a flag on the field for not knowing what a bronco is. The Broncos have shut out the Colts completely in this game.

Now at this point in my equestrian life, I’ve come to terms with the fact that equestrian sports are NEVER going to be as popular as football (or really, any other major ball sport in America.) I can’t explain it — I mean, who would rather watch a completely unfathomable tide of men in tights chasing each other back and forth when there’s the excitement and drama of three-day eventing, reined cow horse, or Thoroughbred racing? I mean, sheesh, for the amount I get out of it, I’d even rather watch the hunters than try to figure out what a three-point conversion is. Imagine just for a second if the football world were more like the equestrian world: what if football players, like, say, rodeo cowboys, only got paid when they actually won?

Maybe we’ll have to console ourselves that our sport is cool enough that other sports make us their mascot. Maybe we should take a little victory wherever we can find it: even if it is through football, horses are everywhere. Someday they’ll all see the light.