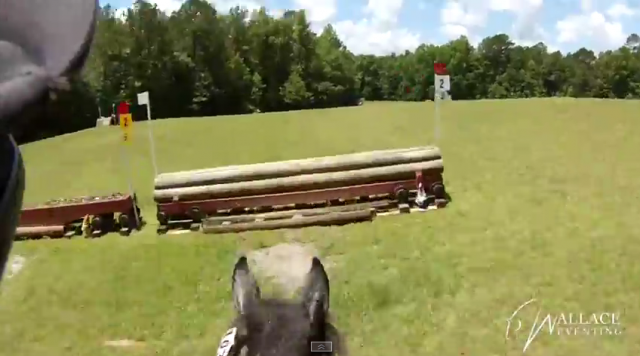 We’ve featured Hwin and Elisa Wallace going cross-country before, but we can’t get enough of these ladies: Hwin’s forward-pricked little gray ears, Elisa’s cute, amusing pep talks and the rhythmic patter of mustang feet over the course. Ride along for the Poplar Place Area 3 Championships as Hwin and Elisa compete!

If you’re not familiar with Elisa and Hwin’s story, check out Lorraine Jackson’s recap of the 2015 Mustang Magic Competition, including how Elisa was able to buy back her plucky little mustang mare from the end-of-competition auction. Since then, Elisa and Hwin completed their first event in Ocala in February. The above-videoed performance landed them fifth in the Novice Horse championship for Area 3.

Elisa Wallace’s website defines her mission as a rider: “Driven not by what she does, but rather by why she does it, Elisa is highly motivated to represent the United States of America in international competition, and to raise awareness about the thousands of American Mustangs currently in BLM holding facilities, and their potential as athletes in the sport of Three-Day Eventing.” If Hwin is any indicator, mustangs can excel at anything they set their mighty hearts to.