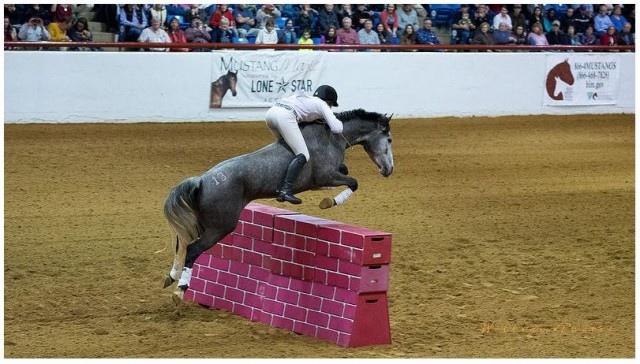 The 2015 Mustang Magic competition was held in Fort Worth, Texas last weekend, and yet again, it wowed the crowd with what mustangs with only 100 days of training are capable of accomplishing in the hands of dedicated trainers. The event is also an opportunity to help each of the horses find new homes. Or, depending on how attached the trainers have gotten, the same homes!

Over the course of the weekend, the challenge horses and trainers competed in a compulsory movements class, in-hand conditioning and handling, and an indoor trail course. The top 10 overall scores moved on to the Freestyle Finals, where trainers were able to showcase their wide range of disciplines for a sold out crowd. This year, mustang magic horses were composed entirely of more mature mares (4-6 years old), and these ladies certainly brought their personality to the table.

Coming in as Mustang Magic Champions for the weekend were Ginger Duke and her flashy light palomino mare, Brittney’s Inspiration, with a Frozen-inspired trick riding performance. The saddle bronc moment early on is a MUST-SEE show!

This incredibly flashy mare from the Baron Valley Complex Herd in Oregon won over a lot of fans with her pretty build and flashy looks. That bald face! Those four white socks! (I’m a sucker for chrome. Is anyone not a sucker for chrome?) The judges must also be suckers for chrome (and good training), because Shadow Storm and her trainer Sierra Sawaya were Reserve Champions.

Cavin Graham and Adobe Town’s Pink Lady ended their freestyle with Cavin’s proposal to another woman, but I suspect Pink Lady approved.  Pink Lady was also the major bidding war of the adoption, after being won for the staggering price of $8,500. That should help pay for some of those wedding expenses!

Zeke Zacharias was also among the favorites with his stunning gray mare Silveretta, and her completely chill performance in the trail class left me green with envy over a 100-day horse who didn’t give one thought to going over that bridge!

But Elisa might tell you the best award of the night was winning back Hwin at the adoption auction. After taking the mare novice at the Chattahoochee Hills November Schooling Show, it became clear that the little mare had the scope and the drive for an eventing career, and Elisa began a fundraising campaign to keep the mare for her program. It was a great success, and Elisa took home Hwin for a paltry $2100.

One of the major success of the Mustang Million was the winning bidder’s payout for Finale horses, which could easily go for $5,000+ and sometimes astronomically more. On the one hand, it’s thrilling to get an exceptionally beautiful and well-trained mare for a great price, and on the other, it’s shocking that all but two of the Mustang Magic Mares this year went for less than $2,000. While the BLM and the Mustang Heritage Foundation continue to fine tune their campaign to adopt the 40,000+ wild horses in holding pens, the spectator and the potential adopter alike can continue to marvel at all that’s possible when a horse of any color is given the opportunity.

Stan Smith and My Girlfriend. Photo by William Porter Photography.