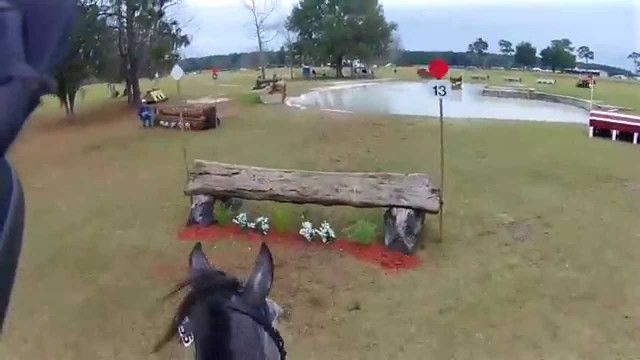 Hwin was one of our favorites from this year’s Mustang Magic competition — if you missed it the first time around, Lorraine Jackson compiled a roundup of amazing moments here.

Of Elisa and Hwin, Lorraine reported, “One of the most coveted awards of the weekend is the Crowd Favorite, which was won by HN’s runner-up Bad A$$ Horse Person of the Year Elisa Wallace and her Adobe Town, Wyoming mare, Hwin. They wowed the crowd all weekend as the sole English representatives, and made up some great ground after a slightly rocky start to the event as Hwin adjusted to the imposing indoor arena and electric atmosphere of the event. But they clearly had the crowd’s heart when Hwin cleared a four-foot brick wall bareback and bridleless in the finale.

“But Elisa might tell you the best award of the night was winning back Hwin at the adoption auction. After taking the mare novice at a schooling show at the Chattahoochee Hills November Schooling Show, it became clear that the little mare had the scope and the drive for an eventing career, and Elisa began a fundraising campaign to keep the mare for her program. It was a great success, and Elisa took home Hwin for a paltry $2,100.”

Hwin proved Elisa’s hunch correct by jumping clear around her first Novice cross-country course at a USEA recognized event, the 2015 Ocala Horse Properties Winter I Horse Trials (January 10-11, 2015). Elisa captured the experience on her helmet cam, presented by Ecogold, so that all of Hwin’s fans could ride along. It looked like an educational trip, with Hwin having trouble focusing and being a bit squirrely at the beginning of the course (“They’re just people!” Elisa reassures him, nursing him forward with clucks) but gaining confidence as she went along. Here’s the video:

Great job, Elisa and Hwin! We can’t wait to watch this pair’s relationship develop in the future. Keep up with their adventures at wallaceeventing.com.