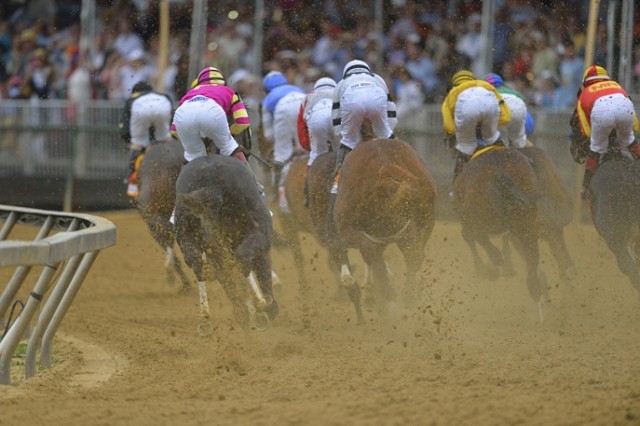 From the details on the race field to the debauchery of the infield, we’ve got the lowdown on the second leg of the Triple Crown.

This Saturday, May 16 marks the 140th running of the Preakness Stakes, the second leg of the Triple Crown. Hosted by Pimlico in Maryland, the “Run for the Black-eyed Susans” races over 1 3/16 miles on the dirt and awards a purse of $1.5 million.

I’ve always had mixed feelings about the Preakness: in most recent years, it seems almost a walk in the park for Derby winners to capture the second jewel. But after so much disappointment in the Belmont with Derby and Preakness winners coming up short, I always talk myself down from getting too excited: yes, the first leg is water under the bridge and prospects have never looked brighter for yet another attempt at the Triple Crown, but it’s horse racing, and anything can happen.

And that’s exactly what it appears to be for the 2015 Preakness: sure, I called American Pharoah way back after his running of the Arkansas Derby, but even with his Kentucky Derby victory I’m not so sure that the Triple Crown is within our grasp this year. Yeah, he did have to go wide for the Derby, and yes, he was against the stiffest competition of his entire young career, but the fact is that I don’t think he “ran away” with the victory. Firing Line battled him closely, and Dortmund should still not be counted out — and both of these colts are returning for a shot at the Preakness.

It’s also worth noting that American Pharoah drew the dreaded number one position in the gate, and Dortmund drew number two. On the other hand, the field is much smaller: only 8 horses are starting as opposed to the Derby’s battle charge of 19. To American Pharoah’s credit, the Derby was the first race in which he was tested all the way and he came out fighting … so maybe I’m just taking a bleaker perspective. Either way, I’ll be rooting for the bay colt on Saturday, and so will a lot of people: he’s already the favorite at 4-5.

But all this horse racing business aside, the Preakness is also the biggest party in horse racing. I see it as the hilarious reply to the Derby’s elegant hats, celebrity-studded grandstand and fine history of tradition. Let’s review what the Preakness infield has to offer:

Now, of course, the Preakness website would have you believe that none of this is happening (except, for whatever reason, the bikini contest, which the website wholeheartedly endorses.) Instead, the long-suffering Preakness PR folks highlight the race’s finer traditions, like the black-eyed susan flower, the Woodlawn vase presented to winners and the so-called “House of Style.” For us plebeians, however, they do note that the infield party is sponsored by Budweiser.

Hey, it’s the freakin’ Preakness — maybe this year I’ll stop worrying about the race and just take up the time-honored tradition of drinking the day away. #kidding #maybe

What do you think, Horse Nation? Can American Pharoah do it again? Have any Preakness infield survival stories you’d like to share? Shout out in the comments!