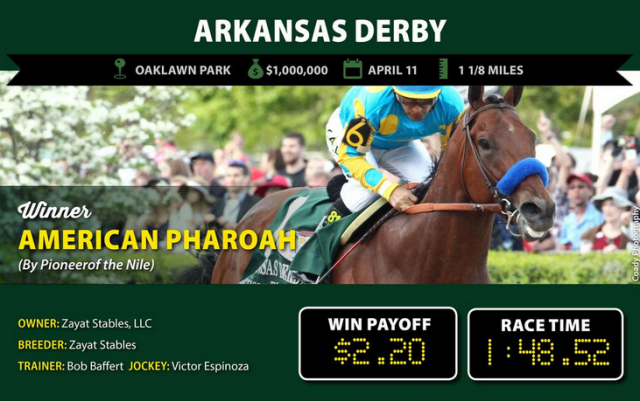 American Pharoah’s easy-breezy romp to victory in the Arkansas Derby bolsters his case as a 2015 Kentucky Derby favorite. Could he be the one to beat?

American Pharoah didn’t even look like he was trying. Victor Espinoza (yep, who also rode California Chrome) never had to reach for a whip. In fact, he never had to ask for more. American Pharoah simply ran, and he conquered the field in last weekend’s Arkansas Derby like the other horses were barely there. The Grade I victory bolstered the colt’s Kentucky Derby qualification score, but perhaps more importantly showed the world that he could be the favorite in the run for the roses next month.

But it hasn’t always been an effortless trip: American Pharoah’s first start ever was a disappointing performance at Del Mar in which the colt became unsettled before the start and wound up fifth. Trainer Bob Baffert took the horse back to school, made a few changes and returned him to the track to win the Grade I Del Mar Futurity. He then won the Grade I FrontRunner, but tragically was scratched at the last minute from the 2014 Breeders Cup Futurity with a deep hoof bruise. Regardless of missing this major milestone, American Pharoah was still voted the 2014 Two-Year-Old Male for the Eclipse Award.

He roared into his three-year-old season with a win at Oaklawn in the Rebel Stakes, cruising under the wire on a sloppy track. Back at the barn, it was discovered that American Pharoah had won the race with a sprung shoe that had been twisted halfway off at the start. Still thankfully sound despite the shoe, the colt prepped for the Arkansas Derby, also at Oaklawn, and won easily under a hand ride by Victor Espinoza, ears pricked from start to finish:

As the race caller states, “that is one a special horse.” Of note is that American Pharoah did not run his usual style, which is to right to the lead; stalking the pace until the leaders tire was good training for the Derby where early speed is likely to be a factor. Despite this change to the normal plan, American Pharoah looked every inch a champion as he danced home easily.

The 2015 Kentucky Derby is shaping up to be an exciting contest: Baffert’s other colt in training, Dortmund, is coming in fresh and fit after winning the Grade I Santa Anita Derby. Neither Dortmund nor American Pharoah have ever been fully opened up in a race, so no one, including Baffert, actually knows how much speed is really there, meaning that Derby day could be one heck of a showdown.