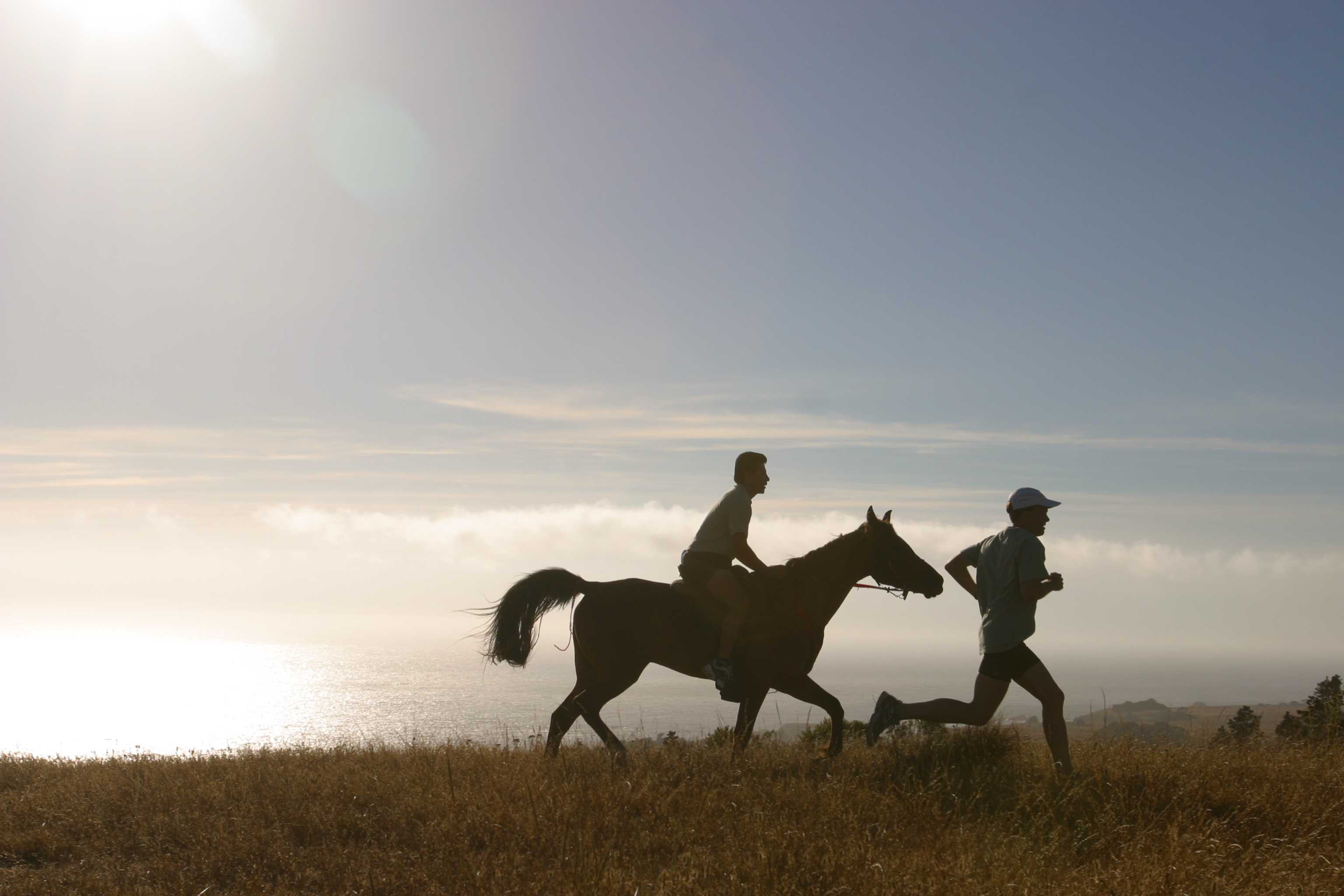 How do you compete with two people and only one horse? Check out the ride-and-tie.

We’ve been highlighting unique endurance education recently: on March 5, Horse Nation published an article detailing the new endurance-riding twist on the triathlon, and on March 16 reader Abby Powell submitted her own account of a multi-use trail relay in her home county, the ECTAthlon. And here’s one more way to get your horse in on the trail-running fun–or should it be one more way to get a friend in on the trail-riding fun? You decide!

A ride-and-tie sounds pretty simple: a team consists of a horse and two runners. One runner starts out riding while the other starts out on foot; when the rider gets far enough ahead, he or she dismounts, ties the horse, and continues on foot. The runner catches up to the horse, unties, mounts and rides on until he or she is far enough ahead, dismounts…and so on. The time is recorded when the final member of the team crosses the finish line.

Seems easy! But now factor in varying terrain, total race distance anywhere from 10 to 100 miles and at least one mandatory vet check during the race–oh, and the other horses and runners you’ll encounter on the trail–and the ride-and-tie gets a whole lot more complicated. It’s as much a strategy game as an endurance race, as teams need to both plan ahead for ties and stay flexible to constantly changing conditions. Tie locations are selected by each individual team rather than assigned, so runners can plan their tie points according to the strengths and weaknesses of themselves and their horses.

Ride-and-ties typically use a “shotgun start” where everyone starts together (runners in one section of the start line and horses in another, so no one gets trampled!) Individual rules vary per race, but many races allow a “hand tie” for the first switch, meaning that a crew member from each team can hold the horse instead of tying off to a tree or sign post. For excited horses still fresh early in the race, the hand tie can be a much safer option, especially as other horses and foot runners are moving quickly past. Later in the race, horses usually stand quietly and wait for their runners to reach them. Some accounts tell of horses recognizing their approaching runners within a pack and whinnying their own encouragement!

Other individual race requirements may include helmets (while I’m all about wearing a helmet while riding, I will say that it’s really funny to imagine people trail running in a riding helmet) and guidelines on appropriate footwear. All races sanctioned by the Ride and Tie Association require one mandatory vet check, and longer races may include two or three vet stops in total. There are no breed restrictions, though Arabians and Arab crosses are typically popular choices for long distance races.

While the sport has been officially organized since 1971, the concept of riding and tying has been around for quite some time as a means for people to travel with only one horse, with one person riding ahead, then dismounting and tying and continuing on foot to let the other person ride for a time. Now, it’s an endurance sport for both humans and horses that’s gaining in popularity: competitions are most common in California but are gaining footholds on the East Coast as well.

Ride-and-ties are certainly competitive races, but the sport has adopted the endurance motto of “To finish is to win” and celebrates the journey itself as much as the finish line. Time limits are usually relaxed enough that runners and riders alike may choose to walk large portions. The sport can also be a community builder, as race managers will help pair runners and riders who may not have partners with whom to participate.

Want to learn more? The Ride and Tie Association has an extensive website filled with information and tips for getting started, including a mentoring program and dates of upcoming clinics.

Have you ever tried a ride-and-tie? Share your story at our forum, Equestrians Anonymous–we even have a board set up just for endurance/trail riding.