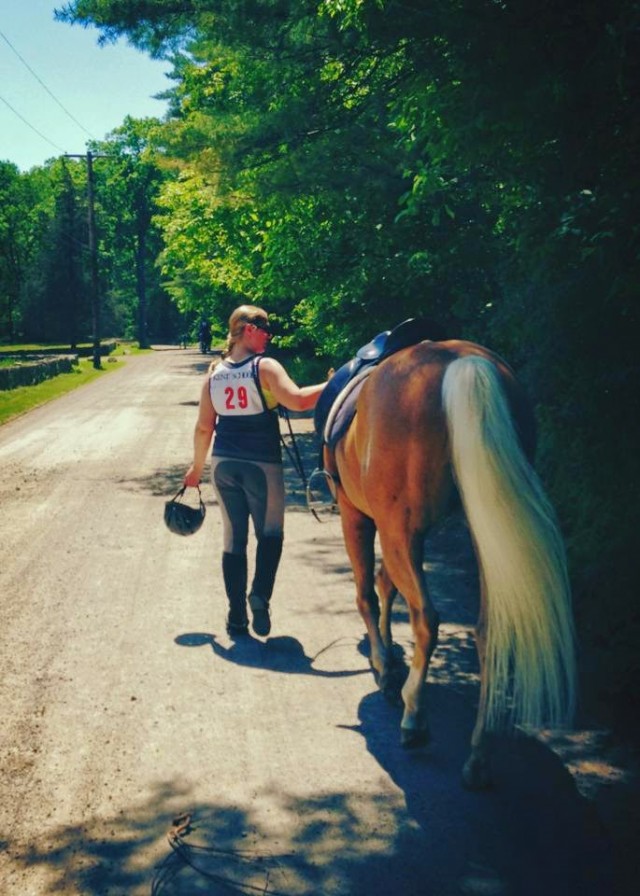 Reader Abby Powell saw our post on the Dubai Desert Triathlon and raised us this.

Republished with permission from Abby’s Blog, The Maggie Memoirs:

About a week and a half ago, I saw an article on Horse Nation about a new take on the traditional triathlon. In a traditional triathlon, each competitor completes a leg of running, biking, and swimming. In this new type of triathlon, the Dubai Desert Triathlon, the swimming is replaced with an endurance ride! The Dubai Desert Triathlon made it’s debut in 2014, but I hate to break it to them — my local trail association has been running a competition like this for several years now!

The Essex County Trail Association (ECTA) partners with public and private landowners to protect, maintain, repair, and construct trails in several towns within Essex County, Massachusetts. In the spirit of celebrating the versatility of our local trails, the ECTA created a four-discipline relay race in 2011 and dubbed it the ECTAthlon. The relay begins with a several mile train run, followed by a mountain bike course, a horseback ride, and finally a kayak race to the finish line. Teams can consist of four different people or a single person may choose complete multiple legs of the race if they are able. Any competitor than completes three or more legs of the race is awarded an Iron Man Award!

The event is extremely equestrian friendly. Black Oak Stables, a private eventing barn on the edge of the trail system, very generously donates the use of their jump field as an area for the equestrians to warm up their horses prior to their leg of the race. Equestrians are also permitted to bring a buddy to ride with should they feel uncomfortable riding alone on the trails.

Me, Maggie, Cassidy, and my friend E after we finished our leg in the 2013 ECTAthlon. Photo from the ECTAthlon Facebook page.

Unlike the other portions of the race where competitors are aiming for the fastest time, the equestrian portion aims for an optimum time similar to a hunter pace; riders that are too fast or too slow are penalized. Additionally, as the “baton” is handed off (which has been pinnies or wristbands in past years) your mountain biking teammate must park their bike and walk over to their mounted horseback rider.

The organizers of the race are also very happy to assist people in creating their teams. You can email them your name if you’re looking to race, but haven’t put a team together. They’ll match you with other eager racegoers looking to fill a slot to complete their team. It’s a great way to meet new people!

My friend’s horse, Cassidy, and I prior to our ECTAthlon ride in 2011.

As time goes on, both open and wooded spaces for recreation have diminished in favor of development it becomes increasingly important to both protect and share these spaces. If you’re a trail rider you’re likely very conscious of sharing the trails with other outdoor enthusiasts such as runners and mountain bikers. This race is a fantastic way to come together with other trail-users simply to celebrate and raise money for a great organization and the land that it helps to maintain. Thanks to the ECTA I have access to some incredibly gorgeous and well-maintained trails that my friends and I can hack to right from our barn!

I was fortunate enough to be able to participate in the inaugural ECTAthlon as a rider and again in 2013 as I rode with a friend as her companion. I can tell you first hand that this is an incredibly fun and positive event. In 2011 I put together a team that consisted of myself as the horseback rider, my dad as the mountain biker, and two family friends as the runner and kayaker. My dad has come to plenty of my horse shows and soccer games, but I had never actually been on a team with him for anything so it was especially cool to watch him finish the mountain biking leg and have him pass me the baton.

As I put together this put together this post, I’ve gotten myself really psyched up to participate this year. I can’t emphasize enough how much of a fun time this event is. I guess I should start looking for a team now! The 2015 ECTAthlon is scheduled to take place on June 6th.

E and Cassidy walk back to the trailers.

Would you participate in something like this? Is there already a race like this in your area?

Thanks so much for sharing, Abby! You can check out her fun blog, The Maggie Memoirs, which chronicles Abby’s adventures in trying to “balance a career, commute, and family with riding and training my horse in baby-level eventing.”