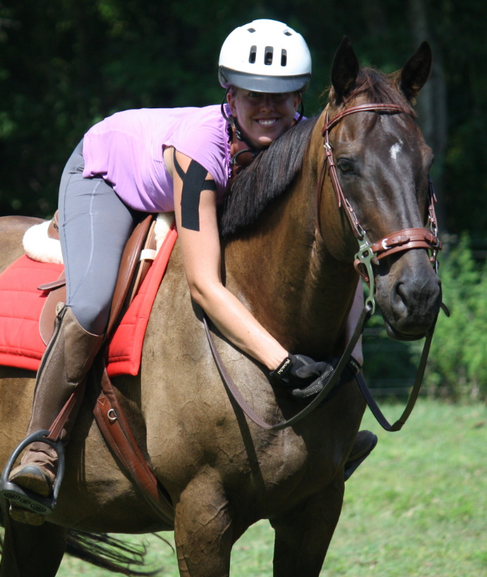 After surgery and rehab, Amanda Uechi Ronan braces for the ultimate test.

Most people would reject a horse that was diagnosed with Kissing Spine at the pre-purchase exam, but then again I’m a sympathetic sucker who always roots for the underdog. Here’s our story.  In case you missed them, here is Part 1 (Surgery) and Part 2 (Rehab).

Up to this point, this series has been about Spiderman’s physical recovery, but around June things started to get more complicated. I could tell he felt better, but there were still lots of hurdles to cross i.e. the mental and emotional aspects of the disease. Spiderman was tense about being saddled. He was stressed about working. To add to the mess, I was extra edgy about hurting him again. So, we started very slowly. I mean … really slowly.

In June, I just sat in the saddle. Once he lowered his head and gave a little snort, maybe cocked a hind leg on its toe to nap, I got off. Simple as that. Granted, we were still doing loads of groundwork and confidence building exercises.

By July, we were walking under saddle on average 20 minutes a day. All of my work was completed outside of the arena, so that we could walk up and down small slopes, etc. I also still incorporated a lot of the lateral work and backing that we had been practicing from the ground. It seemed particularly important that he do gentle lateral work in each direction to “unlock” his spine, hips and shoulders. Whether it was due to the years of crookedness from Kissing Spine or it was just him, every part of his body needed to be unlocked every ride for him to go smoothly. For a few awesome lateral exercises check out: Sustainable Dressage.

It wasn’t until August that we finally started trotting. His head was high and his back was hollow, but it was a trot! It’s difficult to explain how good it felt to finally trot Spiderman after six months of physical rehabilitation. We started with five minutes of trot work a day, increasing the intervals by five to 10 minutes every week. Slowly but surely, I started to see improvement in his movement. His head was going down and his back was coming up. There were glimmers of brilliance in every ride.  They might only exist for a stride or two, but they were there.

It was around this time that I suffered from “Equestrianism Googleitis” … a medical term I assure you. The patient/rider basically overthinks everything and believes the horse (despite improvements) needs a new saddle, or a chiropractor visit, or a massage/acupuncture session, or needs to speak to a pet psychic. Don’t pretend you don’t know what I’m talking about, people. Needless to say, I test rode five new saddles and realized the saddle I already had worked best. You can read all about that fiasco here. I invested upwards of $150 on massage technique books only to realize that a good old-fashioned George Morris approved grooming does the trick. Finally, I learned never to Google “potential” horse maladies. Trust your vet and trust your horse to tell you what he needs.

Back to the riding … September through October we focused on perfecting our walk and trot, still working mostly on the flat. Every ride he felt more round and supple. His topline started to gain a little muscle!

Towards the end of the month, I did incorporate a few poles on the ground, super tiny cross rails (under six inches) and more confidence building obstacles.

We also started canter work, at which he is glorious. I’ve never rode a horse with a more beautiful walk to canter depart. Above all else, I wanted to keep Spiderman calm and optimistic about the work. Maybe I progressed too slowly? It was the speed that we wanted to take things, which is all that really mattered.

Fast forward through the icky cold winter (where we did more of the same), Spiderman and I are looking forward to a great 2015. We hope to be back in full training as soon as the spring sunshine makes its grand entrance. I’m hopeful that we will be competing as early as June. Overall, I believe the surgery was a huge success. He still has a scar over the top of his spine, but it is completely covered with hair.  If you weren’t looking for it, you wouldn’t know it was there.  Could he ever be a Grand Prix level jumper? In the end that doesn’t really matter. Spiderman is living pain free and will no doubt be a very successful low-level jumper, which is exactly what this amateur was searching for.

I’ll leave you with an incredibly riveting video of us going over a tiny vertical two weeks ago.

If you have any questions about Spiderman’s surgery, please ask. Just remember I am not a veterinarian! I can only give you an answer based on our experience.