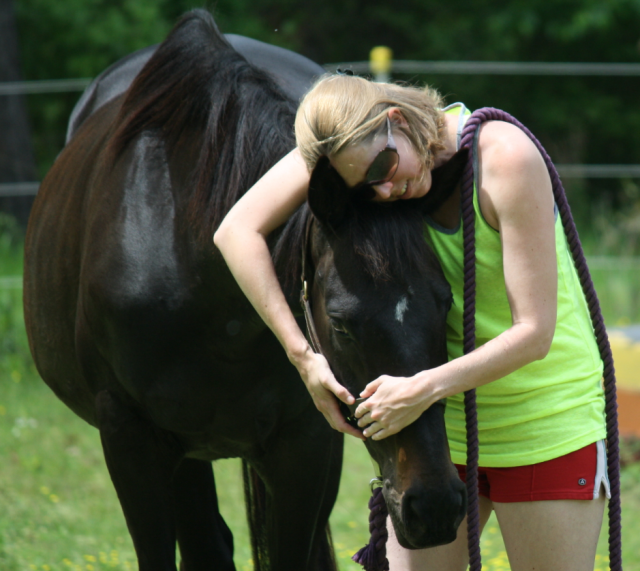 Spiderman’s pre-purchase exam was on January 17, 2014. He presented no lameness at the walk or trot, but the vet immediately noticed he held his head extremely high. It generally stayed at a 90-degree angle to his body. Spiderman’s high head and hollow back had been discussed as a training challenge by previous owners. After the x-rays (pictured below), the vet diagnosed him with multiple “kissing” spots with micro fractures. The vet recommended immediate surgery, rather than the less invasive alternative treatments of injections and/or physical rehab, considering there were already signs of bone degradation.

I was heartbroken, which was ridiculous. I’d known this horse for all of a week! After messaging the seller the bad news, I had an almost immediate reply. They offered to give me Spiderman for free as long as I promised to see him through the surgery and rehab. That left me with one very big decision. I had been looking for a horse to compete immediately! Was I really contemplating this? Of course I was…  I said yes.

The decision to sign up any living being under your care for surgery should not be taken lightly, but at the end of the day you have to trust your instincts. For more information on all Kissing Spine treatments, I love this post by Burlington Equine Veterinary Services LLC.

Confident in my veterinarian’s expertise, I gave the go ahead for surgery. Spiderman’s appointment was set for February 3. The night before, I gave him a little grain, a few carrots, 15 gm of Probios and tucked him into bed wearing a dashing #4 collar.

Unfortunately, I was unable to see him the day of the procedure, but I did call a few times to see how he was faring. The veterinarian stated that the surgery went well, but was more extensive than initially planned. The damaged areas of his spine were worse than the initial x-rays showed and some of the bone had to be removed. Updated x-rays were taken throughout the surgery (pictured below) and the entire area was injected with corticosteroids post surgery to aid recovery. Spiderman was on adequate pain medication, had already received his first laser therapy treatment and was happily eating hay in his stall by the end of the day.  He would continue to receive laser treatments everyday for 14 days.

February 5 was my first post­surgical visit. I have to admit…it was scary. The first thing I noticed was that Spiderman had lost weight. I was told it was normal to drop pounds directly after a surgery and that his rations had been increased. (Note: Now a year later, I have realized Spiderman is fairly OCD and does not enjoy change. Throwing him into a new home, then a vet clinic, then a surgery must have blown his mind. I’m sure that the mental/emotional stress made him lose weight more than anything else.)

There was noticeable swelling surrounding the incision site. It was visually horrifying, for me at least, and painful to the touch. The vet tech noted he was a “bleeder” but said that was normal for some horses. Though it looked ugly, the drainage was normal and a sign of healing. The silver areas around the wound are a spray on adhesive bandage called ALU Spray.

By February 8 the swelling was down, but the wound was still oozing. The sensitivity around the incision site was greatly reduced, though you could tell that Spiderman was very wary of movement near his spine. Overall, he seemed brighter eyed and friendly. He leaned heavily into my grooming, loving the attention, particularly around his head and neck. His hind legs were a bit stocked up, most likely from standing in a stall for over a week, but a few minutes of massage took care of that problem. My husband and I noticed he seemed to be standing with his head lower than his “normal,” resting it well below the height of his withers.

On February 12 both the swelling and oozing were completely gone. During grooming I noticed that not only was the incision site not overly sensitive, but Spiderman allowed me to hover over and gently touch the actual stitches. On this particular visit he was mostly interested in getting carrots; reaching, stretching and contorting his way into my pockets and treat bucket.

On February 15 Spiderman was scheduled to have the stitches removed so he could finally come home! When we arrived at the vet clinic, the stitches had already been taken out and the area had been scrubbed clean. I was told to keep him in confinement for another week, use absolutely no winter blankets for 30 days, and return for a check­up in 60 days to form a riding rehabilitation plan! The vet said to expect lots of rolling and tomfoolery — because his back probably felt really good for the first time in a long time — but to just check the spot daily and scrub it clean when needed.

Once at home he rolled, ate his dinner and took a long nap. I cleaned the incision later that evening, scrubbing the whole site with warm water and Betadine solution. I then sprayed Vetericyn on any bits that were still “fleshy” and finished off with ALU Spray.

Check back next week for Part 2 of our story! If you have any questions about Spiderman’s surgery, please ask. Just remember I am not a veterinarian! I can only give you an answer based on our experience.