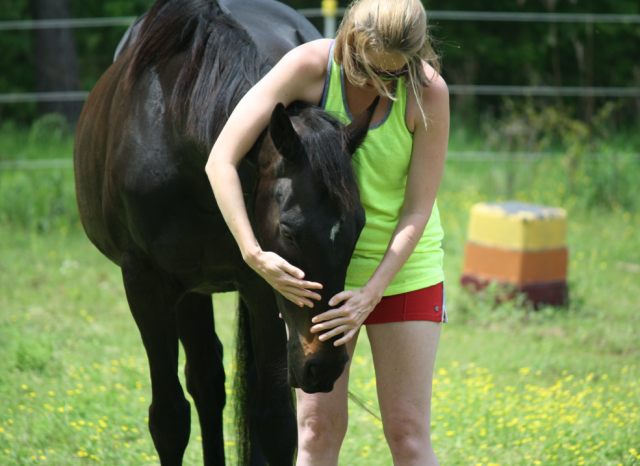 Last week we discussed how I met Spiderman and his surgery. This week we’ll take a look at the first months of rehab.

Feb. 15th through 22nd, I cleaned the incision site daily with warm water, Betadyne solution, Vetericyn spray and then ALU Spray. Spiderman was also very happy to begin 24/7 turnout. He frolicked, he bucked, and he rolled … he made me a nervous wreck.

By Feb. 22 through March 1, I could brush the incision site with a soft body brush. The hair was growing in nicely and I began to massage his entire topline with long “effleurage” strokes. I also began basic carrot stretches and groundwork this week. One thing I immediately noticed was that Spiderman was willing to lower his head. Before the surgery, he would lower his head on cue, but he always looked tense. After the surgery, he lowered his head with a loose lip and soft eye.

On March 2, we had a polar vortex sweep through east Texas dropping the temperatures from 78’F to 34’F with expected lows in the 20s overnight. The vet had told me not to put a blanket on Spiderman for 30 days, but I just couldn’t keep him naked during that sort of temperature drop with nothing but my shed row-style barn to keep him warm. When temperatures climbed back into the 60s on March 4, allowing the blanket to come off, the incision site had a spot of swelling and was sensitive.

On March 9, the lump of swelling burst, leaving a small hole about the size of a ballpoint pen tip. I cleaned the whole area and applied Vetericyn. Spiderman showed absolutely no signs of sensitivity around the hole.

March 10 through 17, I continued to clean the small hole. Three days after it burst, there was a bit of proud flesh.  That quickly receded, leaving nothing but pink skin remaining. There are still “lumps” over the incision site, but I’m beginning to wonder if those will always remain.

In April, our groundwork continued. I began doing lots of in-hand walking (upwards of 30 minutes a day), lateral work, and backing. He was fairly head shy, so I also began daily facial massages. Not only did this seem to make him happy, but it helped relax all the muscles in his neck, withers and back.

In May, Spiderman passed his six-week check up with flying colors. Unfortunately, Spiderman had some trust issues when it came to saddling. Rather than push the issue, I opted to continue groundwork, adding trot exercises.

Because our property has a lot of clay, we also installed a ‘sand box’ for him to roll in. It’s hard to describe how happy he looked investigating his beach sand … and later napping in it.

Check back next week for Part 3 of our story when we finally start riding! If you have any questions about Spiderman’s surgery, please ask. Just remember I am not a veterinarian! I can only give you an answer based on our experience.