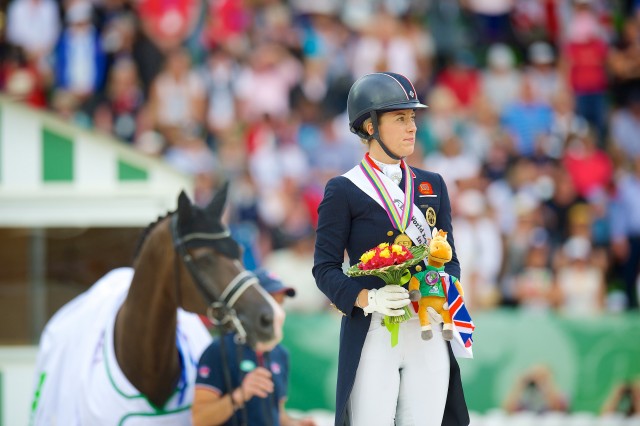 Our writers have put forth their nominations for HN’s 2014 Horseperson of the Year. See the nominees and cast your vote for who deserves the title!

Some awards are given to those who have won the most points or earnings; others are given to those who given measurable contributions to the sport in some way. Here at Horse Nation, we like to recognize our favorite equestrians in our own way: who’s the most bad-ass? Read the nominations and then vote for who you think deserves the 2014 title of HN’s Bad-Ass Horseperson of the Year.

In Sally’s words: “Sorry, I’m not very original.” But how can you not give Charlotte Dujardin and Valegro your support? After all, this duo has been smashing records right and left in their competitive career–and when they ran out of records to break, they starting besting their own. (For more about their recent record-setting performances, check out our recent report here.) Dujardin has proven again and again that not only is she an absolute world-class rider and horsewoman, she’s also a true class act as a person. And at the same time, she’s also mentioned (casually, and jokingly…maybe) that she’s aiming for a 100% score next.

In Lindsey’s words: “Boyd pretty much kicks butt wherever he competes.” And basically, she’s summed up the man, the myth and the legend that is Boyd Exell, a native Australian who now operates out of England. He’s a phenomenon in the world of driving, electrifying both indoor events and full combined driving events all over the world. He won the FEI World Cup for the 2013-2014 season and is currently leading the standings for the 2014-2015 season, including four individual event wins (the most recent being December 20 at Olympia.) He also captured his third world championship title when he clinched the combined driving at the 2014 World Equestrian Games held in Normandy, France. If this isn’t enough to convince you, please refer again to the above video and watch what exactly this discipline requires the driver to do and you’ll understand why Boyd Exell is already a BA.

In Carla’s words via her piece on Collier and Journey: “‘It means even more to me to have my special service dog Journey by my side to accept this award,’ said Sydney Collier at the gala, ‘When Journey was granted his credentials at the Alltech FEI World Equestrian Games a world of opportunity and education was opened. Together Journey and I are now able to share with others the special working relationship and independence that service animals grant their handlers. The icing on the cake? Journey loves horses as much as I do!’ Journey assists Sydney at home and in the barn by carrying things for her, turning on and off lights and running for help when necessary. He also loves to give her horse Wentworth kisses and feed him his daily banana!”

In Amanda’s words: “I’m nominating eventer Mary King for staying strong. She was humble and apologetic after a heavily disputed suspension put her on the sidelines for two months. Instead of wallowing in self-pity, Mary wrote a fantastic book, ‘Mary King: My Way,’ helped her daughter at the Jr. European Championships, and took a few vacations.  he came back with a BE100 win in August riding 5-year-old ‘King Dan’ at West Wilts.” (We added this video of King’s amazing save for extra BA-points.)

Mandy McCutcheon went from a star in the discipline of reining to a household name among all horsemen this year thanks to an outstanding performance representing the United States at the World Equestrian Games in Normandy, France. Not only was Mandy the first woman to represent the US in reining at the world level, but she was the first non-professional as well, giving new inspiration to amateur riders everywhere. She captured the bronze in the individual reining and helped rocket the US team to the gold medal position yet again. When you consider that Mandy’s not a professional–meaning that in between winning at the international level, she’s also holding down a full-time job AND raising a family–her accomplishments in the saddle stand out that much brighter.

In Lorraine’s words: “Not only an acclaimed mainstream eventer, the work Wallace is doing with the BLM Mustangs is really phenomenal and meaningful. Her mustang gelding Rune competed at the 2014 USEA Young Horse Event in Georgia and came in third, beating out an embarrassing number of impeccably bred sporthorses, despite his modest stature. And her most recent project mare, Hwin, went Novice triumphantly at Chattahoochee less than 60 days out of the wild horse holding pens. And, of course, she’s done awesome demos at Rolex, Fair Hill, and others. And all the while she’s still killing it with her upper level eventers.”

So what do you think, Horse Nation? Which of these well-deserving equestrians deserves the title? Vote below!

THIS POLL IS NOW CLOSED.