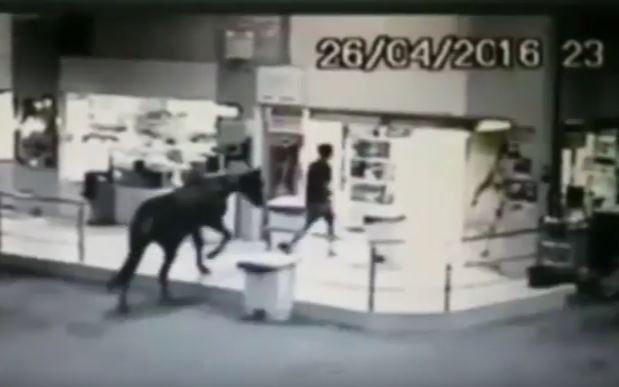 This Wild West-style robbery might have gone a little better if storefronts still had hitching posts.

It took a few years of real-life horsing around in my youth for me to realize that the personalities assigned to TV horses like Trigger and Silver were tricks of showbiz. My horse would not unilaterally decided to chase down bad guys for me or be my sidekick in a fight. Apparently, this would-be robber hasn’t learned that lesson yet, because the only thing he and his steed have in common is a good flight instinct.

Taken from security footing from a convenience store in Joao Pessoa, Brazil, the man appears to ride up to a convenience store on his horse a few minutes before midnight, and the two together enter the store, where the man confronts a clerk, shaking the poor guy down for his cash. The horse apparently has his own assignment, inspecting the refrigerated goods and keeping an eye out for the cops. But as you might expect, the horse gets lodged in a dodgy area of the store, spooks, and takes off for the exit, whether his partner in crime is coming or not.

According to reports, neither human nor equine have been caught or identified. But if you happen to see a man enter a store with his horse in northeastern Brazil, I’m going to go out on a limb and guess it’s probably the same guy.

Run for the hills, horse! And go riding.