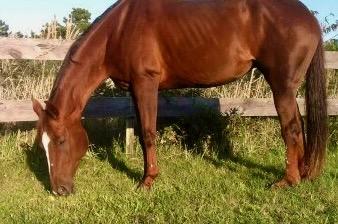 DSLD (Degenerative Suspensory Ligament Desmitis) is a painful and debilitating disease that plagues many horses. Read on to learn more about it and how to manage it.

DSLD (Degenerative Suspensory Ligament Desmitis) is a relatively recently recognized condition in horses in which a major supporting structure of the lower legs degenerates or deteriorates over time. This painful and debilitating body-wide disease eventually reaches a point where the horse can no longer get up and down, move to food and water, or even stand comfortably. Fortunately, multiple teams of researchers are investigating the underlying cause, better diagnostic tests, if it’s hereditary, and the most effective methods of managing it.

What is DSLD in horses?

The suspensory ligament is a thick, strong, tendon-like structure running down the back of the leg from the knee or hock to the fetlock, providing critical support to this joint. When veterinarians first detected horses experiencing tissue failure of this ligament — in either both hind legs, both front legs, or all four legs — they also noticed it did not follow the pattern of a typical suspensory ligament injury. That is, the horses were not in high-impact/high-speed activity, there was no history of sudden trauma, more than one leg was affected, and the ligament did not improve with rest. Unlike a “pulled suspensory,” DSLD is not an injury that can be healed.

DSLD can develop at almost any age (the range is seven months to 20 years), but it more commonly begins to occur around 10 – 15 years of age. While the disease was originally identified in Peruvian Pasos, it has been diagnosed in multiple breeds, including Paso Finos and Paso crosses, Arabians, American Saddlebreds, American Quarter Horses, various warmblood breeds, Morgans, and even Thoroughbreds and Standardbreds. The fact that DSLD seems to run in certain bloodlines may indicate it is a hereditary condition, although to date, no genetic marker has been identified and no genetic test exists. Originally thought to be due to overwork or old age, it is now believed that DSLD is a disease of connective tissue throughout the entire body, not just of the suspensory ligaments. The same abnormalities seen at the microscopic level in the suspensories has also been documented in the nuchal ligament in the neck (directly under the mane), the patellar ligaments, the deep digital and superficial digital flexor tendons, blood vessels (including the aorta), the connective tissue that surrounds muscle, and even the white part of the eye, known as the sclera.

Also, one current theory about DSLD is that the problem isn’t with the collagen fibers themselves within these different types of connective tissues. Instead, the problem may be with the substance between the collagen fibers known as “proteoglycans.” These protein-carbohydrate complexes are a normal component of connective and other tissues and play important roles in the body. However, evidence suggests that when excessive amounts of proteoglycans accumulate within tissues or are malformed, they can be damaging to the local tissue, such as the suspensory ligament.

Because DSLD is likely more of body-wide disease in the horse — not just a suspensory ligament disease– and because it appears to be linked to abnormal amounts/abnormal formation of the proteoglycan molecule, some researchers have proposed a new name for the disease: Equine Systemic Proteoglycan Accumulation or EPSA.

The hallmark sign of advanced stage DSLD is “dropped fetlocks,” in which the fetlock joints seem to be sinking towards the ground. Looking from the side, as the pasterns become horizontal or parallel to the ground, the exaggerated angle between the hoof and the pastern takes on a “coon-footed” shape. When this happens in the hind leg, the normal angle to the hock straightens out and gives the horse a “post-legged” appearance from the side. Some, but not all, cases of DSLD also have enlarged fetlocks and/or heat and swelling in the suspensory ligaments.

With such dramatic changes to the body, it might seem fairly simple for owners to pick up on the disease and then have their vet confirm the diagnosis. However, in the early stages of DSLD the signs are usually more vague and subtle, and may include:

These nonspecific signs and symptoms make early recognition and diagnosis of DSLD challenging as they could point to a wide variety of lamenesses, a neurological issue, or even medical problems like gastric ulcers or colic.

To assist veterinarians in the early diagnosis of DSLD, two of the initial researchers of the disease — Dr. Jeannette Mero (DSLD Research, Inc.) and Dr. Janet Scarlett (Cornell University) — developed a simple, four-step protocol for use during a lameness workup when this condition is suspected:

At this time, there isn’t a specific diagnostic lab test for DSLD. However, Investigators like Dr. Jaroslava Halper at the University of Georgia and Dr. Eric Mueller at Michigan State University are collaborating on even more specific and sensitive methods of diagnosing DSLD. Their work involves taking a biopsy (small, surgically-obtained sample) of the nuchal ligament in the neck or of a tendon in the leg.

Because DSLD is thought to run in families and be more prevalent in certain bloodlines, teams of researchers at Texas A & M University as well as the University of Wisconsin-Madison are trying to identify a genetic marker for the disease. This will make diagnosing the disease as quick, simple, inexpensive, and painless as testing blood or hair roots. Degenerative Suspensory Ligament Desmitis is a slowly progressive disease with no cure. Therefore, treatments are “palliative” in nature, meaning they are designed to ease pain and make the horse more comfortable but not specifically deal with the underlying cause of the condition. This section will review what is known at this time about medications and supplements, hoofcare and body work, exercise and living arrangements, and other ways owners can support their horses.

Medications & Supplements
Many veterinarians and owners rely on non-steroidal anti-inflammatory drugs (“NSAIDs”) like phenylbutazone (“bute”), flunixin meglumine (Banamine®), and firocoxib (Equioxx®) to help relieve the body-wide pain and inflammation associated with DSLD in horses. Discomfort may arise from the suspensory ligaments themselves, other soft tissues like muscle and tendon that are trying to compensate, the changing conformation of the limb (ie straightening of the hock angle), and even arthritis due to abnormal stress on joints. Therefore, it is important to work closely with a vet in designing a long-term pain management protocol that makes the horse more comfortable without increasing the risk of side effects.

Most evidence regarding the use of supplements in DSLD horses is word-of-mouth, such as using MSM to support comfort as well as a normal response to inflammation. Studies are underway to examine the effects of certain ingredients on nitric oxide production in ligament tissue and whether this mechanism of action is favorable in cases of DSLD. Supplementing a horse with this condition with herbs and other ingredients should be done in close partnership with a veterinarian. Corrective trimming or shoeing is an important element of managing the DSLD horse. Because horses with this condition have been known to dig holes so they can stand with toes lower than heels — relieving pressure on the tendons and ligaments along the back of the leg — farriers have developed techniques that provide a similar benefit.

There are a number of complementary and alternative therapies that veterinarians and other equine healthcare professionals can offer in an attempt to further alleviate discomfort and possibly improve tissue health. These include stem cell and PRP (platelet-rich plasma) injections, shockwave and laser treatments, magnetic therapy, acupuncture, chiropractic, and massage.

For the most part, stall rest is not recommended except possibly after a farrier visit or medical procedure when the horse is more sore than usual. Turnout — either alone or with a safe, trusted companion — seems to be the most comfortable situation for the majority of horses living with DSLD, and may even be healthier for the affected tissues.

Severe weight loss as a result of pain, stress, and reluctance to move to feed and water is also seen in horses with DSLD. Addressing the discomfort while ensuring access to feed is key to helping support these horses. The nutritional needs of a horse with this condition may be different and are worth discussing with your veterinarian or equine nutritionist. These horses may require more calories not only from hay or grain, but also from supplements that provide calories, fat, and other ingredients for healthy weight. On the other hand, excess weight can put undue strain on an already stressed body – so be sure to monitor body condition score regularly, learn how here.

During warm months, controlling flies may significantly reduce stress and discomfort in DSLD horses, possibly helping prevent weight loss. Start with physical barriers against bugs such as fly masks, fly boots, and fly sheets. Add repellents to offer another layer of protection. Also consider insect control supplements and feed-thru insect growth regulators (IGRs), as well as environmental fly protection like Fly Stoppers and fly traps. Any horse but especially those dealing with DSLD may appreciate the cool comfort of a stall or run-in with insect-deterring Kool Kurtains and fans during the hottest part of the day.

Can I ride my horse with DSLD?

In fact, a 2011 study by Xie, Spencer, Beadle, et al. “Effects of athletic conditioning on horses with DSLD: A preliminary report,” found that 30 minutes of mild to moderate exercise every other day may even have improved signs of DSLD. Some words of caution: the horses in this study underwent walk and trot only and did so without a rider. Also, anyone thinking of beginning a controlled exercise program with a DSLD horse should consult a veterinarian first. The general consensus among vets is that horses with DSLD should not be ridden or driven as it adds more weight to limbs and other tissues already experiencing difficulty.

Other Ways to Support DSLD Horses

It is commonly recommended to support the limbs of a DSLD horse with boots or wraps. However, this must be done correctly and under close observation to prevent secondary issues such as damage to other tendons and ligaments, pressure sores on the skin, or further laxity in the suspensory ligaments from relying on bandages 24/7.

Because of their mobility issues, it is important to ensure that the living situation does not put them at the mercy of the elements (heat, cold, wind, rain/snow) or aggressive pasture mates, and that the footing in their environment does not create additional challenges (for example hilly terrain, slicky surfaces, high step-overs, etc.) Finally, be aware that horses with DSLD may develop secondary issues such as arthritis, with ringbone being a common complication.

What is the Prognosis for DSLD?

It is not possible to predict how quickly an individual horse diagnosed with DSLD will deteriorate. Sometimes the condition advances rapidly and sometimes it advances slowly, even stabilizing for a time before actively degrading again. However, the end result is always the same: humane euthanasia to prevent suffering. This is a difficult decision to make but one the veterinarian involved in the case can assist with. Things to consider include:

As devastating as this disease is, there is hope. Research is ongoing into better and earlier methods of diagnosing DSLD, further understanding the disease process itself which may lead to a treatment, and most importantly, discovering a genetic marker so that horses carrying the gene (if, in fact, it is an inherited trait) can be identified before breeding. As it currently stands, experts recommend that affected horses not be bred in case the trait can be passed on to offspring. Right now, prevention is the best medicine.

We strongly encourage you to consult your veterinarian regarding specific questions about your horse’s health. This information is not intended to diagnose or treat any disease, and is purely educational.