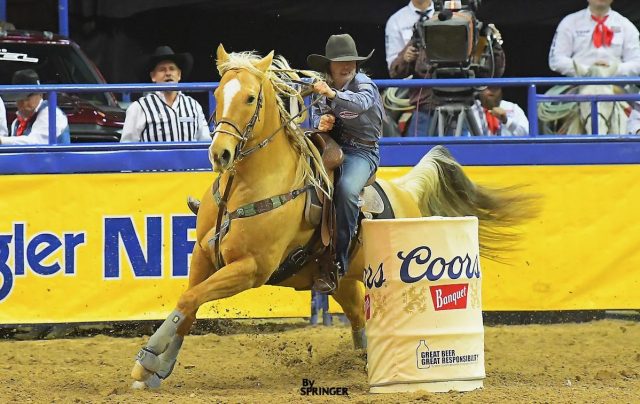 December 12, 2022DeAnn SloanKayla Zielke#BARREL RACING, Event Coverage, NFRComments Off on NFR Barrel Racing Round 10 Recap: Kinsel Wins the Round and the World Title

Hailey Kinsel takes Round 10 — with only one rein! — and secures the World Title. Read on for the full recap:

Hailey Kinsel topped off her 2022 season with five round wins at the NFR and earned the WPRA World Champion title. Kinsel ran DM Sissy Hayday or Sister for all 10 rounds and showed amazing consistency to close out the NFR with a 13.34 in round 9 and 13.35 in round 10. The 11-year-old palomino mare by PC Frenchmans Hayday and out of Royal Sissy Irish by Royal Shake Em was lightly run for most of the year while Hailey seasoned a couple other horses in her string and mainly ran just Sister at the bigger rodeos. Of the 50 rodeos she ran at this season, Sister ran at just 10.

Sister has over $2.5 million in Equistat earnings over a six year career in barrel racing. She was trained by Hailey and her mom Leslie Kinsel and while she’s always had some quirks, she’s always been reliable in a run. Kinsel’s Round 9 win had some unexpected challenges to overcome when the reins flipped over Sister’s head going around the second barrel. They finished out the run like nothing had happened to still win the round and run the fastest time of the rodeo.

Shelley Morgan and HR Fameskissandtell was one of only two barrel racers to run a clean pattern for all 10 rounds. Kiss’s honest running style allowed them to win the average title running 10 runs in 137.28 and earning $74,149. Kiss, an eight-year-old mare by CEO and out of Fames Fiery Kiss by Dash Ta Fame may not have earned a round win this year, but she was able to keep Shelley in contention and made some top runs to place, including third in Round 10. Including the average they were able to earn $154,568 in just 10 days at the NFR and closed out their season with $265,028 in earnings. She was able to finish 3rd in the world standings.

This year’s NFR was not without its spice and drama. Ground troubles caught up to a few contestants like Stevi Hillman and Dona Kay rule. Stevi ultimately had two major slips on Sandinmysocks, or Sandi, that led to major discussions on social media. Hailey Kinsel noted in her buckle ceremony for Round 9 that the difference between a rodeo horse and a barrel horse is its ability to stand up and turn on any ground. This comment was taken out of context and blew up on social media, with people implying that Hailey saying that the young horses being run were not cut out for rodeo ground.

She later cleared this up in a post on Facebook post, making it clear that she was grateful Sister has proven her ability to work under any conditions. Although the comment was taken out of context, the overall debate still exits that certain horses need ground that is worked every five riders to be able to do their job and some horses have a turning style that makes them able to work in anything. However these attributes don’t take away from the talent of one horse versus another.

Here are the final standing for the NFR Barrel Racing:

Thanks for following along, and we’ll catch you next year.