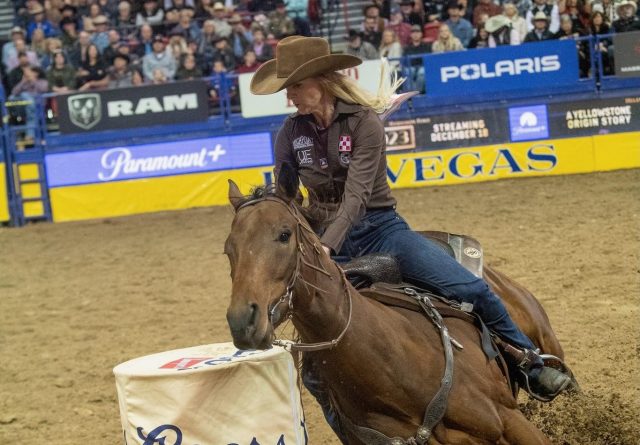 The standings shake up with the culmination of Round 7. Get the recap here and get ready for Round 8. It’s still anyone’s game!

Wenda Johnson and Mo won Round 7 with a 13.60. After their round 1 win, Wenda thought that Mo, or Steal Money (First Moonflash X Im Chica Stoli, by Stoli), had lost some confidence in the ground which led to them clocking a little behind the pace the last few rounds. She made sure he was rested up for Round 7 and gave him some extra support in her riding. It definitely paid off.

Wenda qualified for the NFR after attending only 31 rodeos throughout the year and earning $121, 594. She set the arena record at Fort Worth and won three of the four rounds she ran in as well as winning two rounds in Pool B of Calgary Stampede, never placing worse than third in the other two. Wenda’s main mounts are Mo and Mac, both are sired by First Moonflash, who has an SI of 122 and holds the world record for 440 yards on the track. Mo had nine starts on the track with one win before he started his career as a barrel horse. He ran his futurity year in 2021 with Kassie Mowry and ended his year running at the NFR, making 2022 his second year running barrels and making NFR.

Wenda is now sitting 3rd in the world standings with $206,677 in earnings and is leading the aggregate after Lisa Lockhart unfortunately tipped the third barrel in Round 7. Four barrel racers are headed into Round 8 with clean runs so far: Wenda Johnson, Shelley Morgan, Sissy Win and Bayleigh Choate. Wenda now has a very good shot at the world title, with only $27,000 separating the top three.

NFR first-timer Leslie Smalygo made a beautiful run to place second in Round 7. She guided Gus to a 13.64 time for some redemption after knocking a barrel in round 6. Gus, or Justaheartbeattofame, is a 2010 chestnut gelding by Justaheartofawarrior out of Yawl A Fame Maker, by Dash Ta Fame. Gus made five starts on the track but never placed before moving on to his second career as a barrel horse. Leslie bought Gus off the track as a three-year-old and patterned him herself. She earned her WPRA permit in 2018. 2022 was a stellar year for the pair. Leading to the NFR they set the arena record in Guymon and won their performance and semi finals group at Cheyenne, ultimately placing second in the finals. Leslie is currently sitting 13th in the world standings with $126,429 in earnings and 10th in the aggregate.

Sissy Win had a fantastic run aboard A R Dash Ta Flame, or Scoop, to place third with a 13.66. Scoop is a 2013 sorrel gelding by Dash Ta Fame out of Discreat Retreat, by Mr Jess Perry. Sissy has only had Scoop for about six months after purchasing the gelding from Danyelle Campbell. Danyelle trained Scoop and ran him for his futurity and derby years. This duo will be a pair to watch coming into the 2023 season. This is Sissy’s first time coming to the NFR and she is currently sitting 11th with $136,565 and third in the aggregate.

NFR Veteran Lisa Lockhart knocked the third barrel in Round 7, dropping her to fifth in the aggregate. Hailey Kinsel ran off the pace out of the money, leaving the door open for Jordan Briggs to earn some round money and take back the number one spot in the world standings. With three rounds left, there are at least five ladies in a dog fight for the world title and it’s still anyones race to win.

Stay tuned for our next recap after round 8. Until then, here are the current standings: