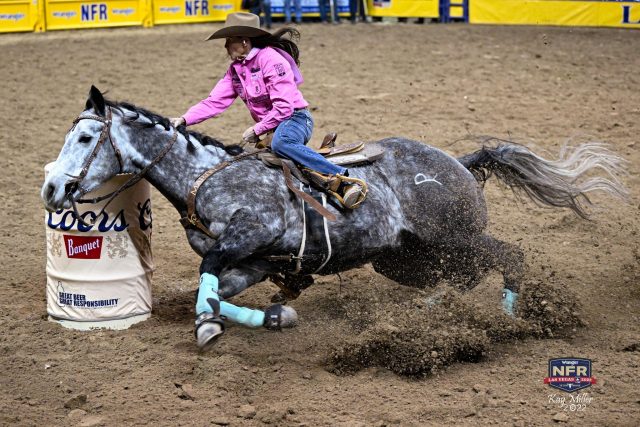 In an exciting Round 5 of NFR Barrel Racing, Lisa Lockhart and Hailey Kinsel split the top spot with smoking 13.52 second runs.

Round 5 was Tough Enough to Wear Pink night for breast cancer awareness at the NFR. The ladies turned up the competition a notch in the barrel racing for pink night. NFR Veteran Lisa Lockhart was sixth out on the ground and made a statement on her young horse Promise Me Fame Guys, aka “Levee,” running the fastest run of the rodeo with a 13.52. Levee is a 2016 gelding by Ain’t Seen Nothin Yet out of Bar Blue Lass, by FC Aboo. Levee had over $120,000 in futurity earnings before he was purchased by Teton Ridge for Lisa to compete on. He was the 2021 Ruby Buckle Futurity Reserve Champion. Levee made an appearance in one round at the 2021 NFR, but was still quite green. With more seasoning, he is making some solid and consistent runs for Lockhart this year. Lockhart has climbed to fourth in the world standings from 14th and is leading the aggregate. She’s currently $55,000 behind the number one spot with earnings of $170, 186.

Hailey Kinsel and Sister came out 12th on the ground and matched Lockharts time of 13.52 to split the round earning them each $25,882. Sister is an 11-year-old mare bred in Texas by Dillon Mundorf. She is by Sherry Cervi’s late great stallion, PC Frenchmans Hayday, aka Dinero, and out of Royal Sissy Irish, by Royal Shakem. Hailey and Sister have qualified for six WNFRs and won three WPRA Barrel Racing World Champion titles together. Hailey and Sister still hold the arena record at the Thomas & Mack with the 13.11 second run that they made in the third round of the 2017 WNFR. Hailey is now sitting number 1 in the world standings with earnings of $225,224 and 8th in the aggregate after some barrel trouble earlier in the week. Hailey is hoping to hold this spot and earn her 4th world title.

Here is a side by side of both runs. It is amazing to see a young horse run right with a mare that has won the world title three times and has over $2 million in lifetime earnings.

With five rounds left it is still a horse race and anything could happen in the standings. It will be a nail biter until the very last run on Sunday Stay tuned for our next recap after round 6. Until then, here are the current standings: