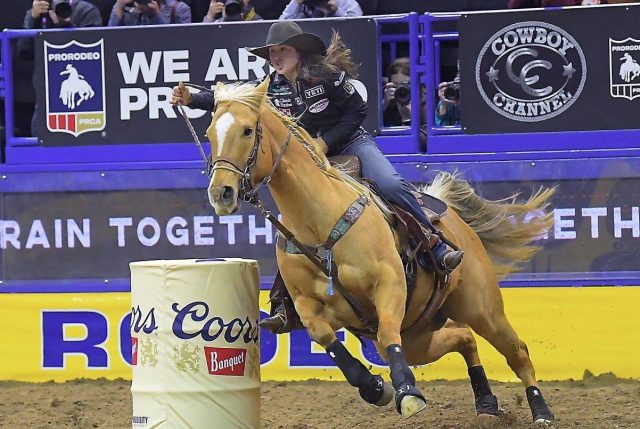 Hailey Kinsel and Sister strike again as they take the top spot in Round 3. Read on to learn more:

Three time world champion Hailey Kinsel and her trusty mare Sister took round three of with a 13.59. Kinsel drew the top of the ground and took full advantage of the opportunity. Sister is an 11-year-old mare bred in Texas by Dillon Mundorf. She is by Sherry Cervi’s late great stallion, PC Frenchmans Hayday, aka Dinero, and out of Royal Sissy Irish, by Royal Shakem. Hailey and Sister have qualified for six WNFRs and won three WPRA Barrel Racing World Champion titles together. Hailey and Sister still hold the arena record at the Thomas & Mack with the 13.11 second run that they made in the third round of the 2017 WNFR. Hailey is currently sitting second in the 2022 World Standings with $187,216 in earnings for the season and ninth in the aggregate. She is currently just $25,000 behind Jordan Briggs in the number one spot. Making up that gap is as simple as one more round win.

Dona Kay Rule and High Valor were second with a 13.74. High Valor is a 2009 gelding by Valiant Hero out of Rare High by Rare Form. He was voted WPRA Horse with the most heart for 2022 and has 2 AQHA Barrel racing horse of the year titles. Valor has been Dona’s main mount for all four of her NFR qualifications. Dona is the oldest jockey in the field at 64 and took most of the spring off for a hip replacement this year. Her season didn’t really get going until early July at Calgary Stampede. Dona is currently sitting fourth in the world standings with $164,956 and 11th in the aggregate.

Lisa Lockhart and Promise Me Fame Guys were third in round 3 with a 13.78. “Levee” is a 2016 gelding by Ain’t Seen Nothin Yet out of Bar Blue Lass by FC Aboo. Levee had over $120,000 in futurity earnings before he was purchased by Lisa and was the 2021 Ruby Buckle reserve futurity champion. Levee made one round appearance in 2021 but was still quite green to the rodeo scene, he has come back seasoned this year and this duo are making some very solid and consistent runs. 2022 marks Lisa’s 16th consecutive NFR qualification. Lisa is currently ninth in the world with $124,250 and third in the aggregate.

Here are the current standings after Round 3:

Stay tuned for our next recap after Round 4.