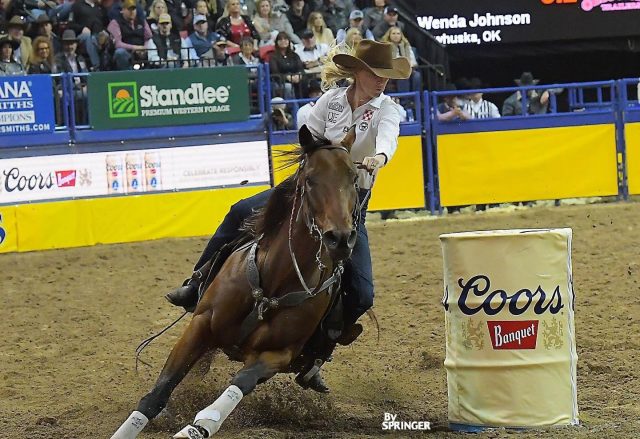 As we head into the second round of NFR barrel racing, here’s a quick recap of Round one.

Wenda Johnson opened the NFR with a stellar run of 13.57 aboard six-year-old Steal Money (First Moonflash X Im Chica Stoli, by Stoli), better known as Mo. Her round one win bumped her to second in the world standings behind Jordan Briggs. Wenda qualified for the NFR after attending only 31 rodeos through the year and earning $121, 594. She set the arena record at Fort Worth and won three of the four rounds she ran in as well as winning two rounds in Pool B of Calgary Stampede, never placing worse than third in the other two. Wenda’s main mounts are Mo and Mac, both are sired by First Moonflash who has an SI of 122 and holds the world record for 440 yards on the track. Mo had nine starts on the track with one win before he started his career as a barrel horse. He ran his futurity year in 2021 with Kassie Mowry and ended his year running at the NFR, making 2022 his second year running barrels and making NFR.

Kassie Mowry also made a fantastic run for second place money aboard CP He Will Be Epic, or Will. Mowry ran most of the year on Famous Ladies Man, setting the arena record at Calgary Stampede along with winning Calgary altogether. She ran Will for his futurity and derby years and he has made a big impression in the first round of NFR this year. Will is a 2015 gelding bred in Texas by Claire Pfluger Powell. He is by Epic Leader and out of Percilla, by Dash Ta Fame. Will stands at 17hh and proves that even the big horses can get it done in the small pens.

Kassie is the Equistat all time winningest barrel racer with over $5 million in career earnings and over $822k in 2022 alone, so this comment by broadcasters during her run took many in the industry by surprise. There was nothing “unexpected” about this performance and we look forward to watching Kassie and Will throughout the week.

Finally, it wouldn’t be NFR without some bronc action where it is least expected! Bull Rider Creek Young had his own wild ride during the grand entry ceremony, but he stuck the landing!

Stay tuned for our next recap after Round 2.