“I cannot emphasize enough what a lovely, charitable thing The World Equestrian Center has done for our equestrian community here in central Florida… WEC has made it possible for some to evacuate who may not have otherwise been able to afford doing so.”

As I write this piece midday Wednesday, Hurricane Ian, now a Category 4 hurricane with sustained winds of 155 mph, is bearing down on Florida’s south western coastline. Ian’s initial path had him crashing in a bit further north near Tampa, and then traipsing across the state directly over Ocala. At present, it looks like the Horse Capital of Florida may be spared some of Ian’s ire, but certainly not all of it.

Hurricane Ian bearing down on the Sunshine State early Wednesday.

Late last week, in my quest to find a concrete barn for my herd — because they are legitimate hot house flowers and not to be trusted to their own devices outside in good weather, let alone a hurricane — I learned that The World Equestrian Center in Ocala would indeed open their facility for evacuees. Furthermore, they did so for free and provided shavings on site for just $5 a bag, delivered to your stalls. Once stall reservations were confirmed, I also received a text message stating that WEC is offering a buffet three times a day for anyone staying there in the barns with their horses on Wednesday and Thursday (there is a fee for the food, but it is quite minimal).

If you have not been to WEC, it is not just a premier equestrian facility, it is THE premier facility. The concrete block barns are all climate controlled and the stalls are oversized at 12’x14′, matted with equine stall mattresses, and each stall is equipped with its own fan. If you have to evacuate, you could certainly do worse. 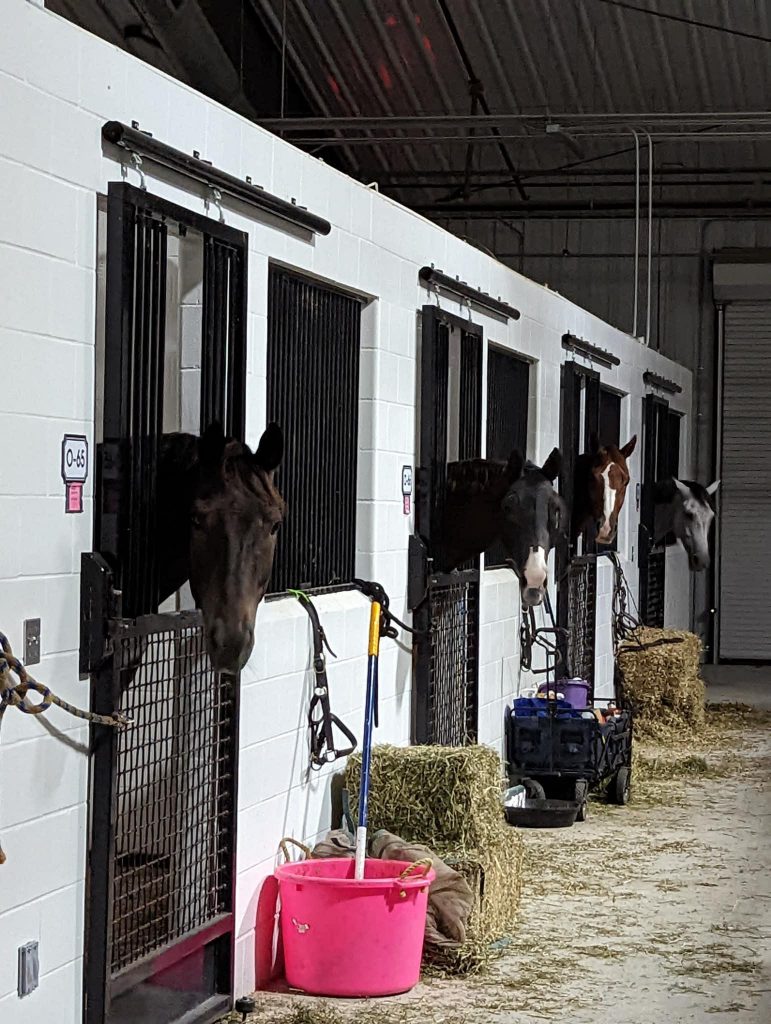 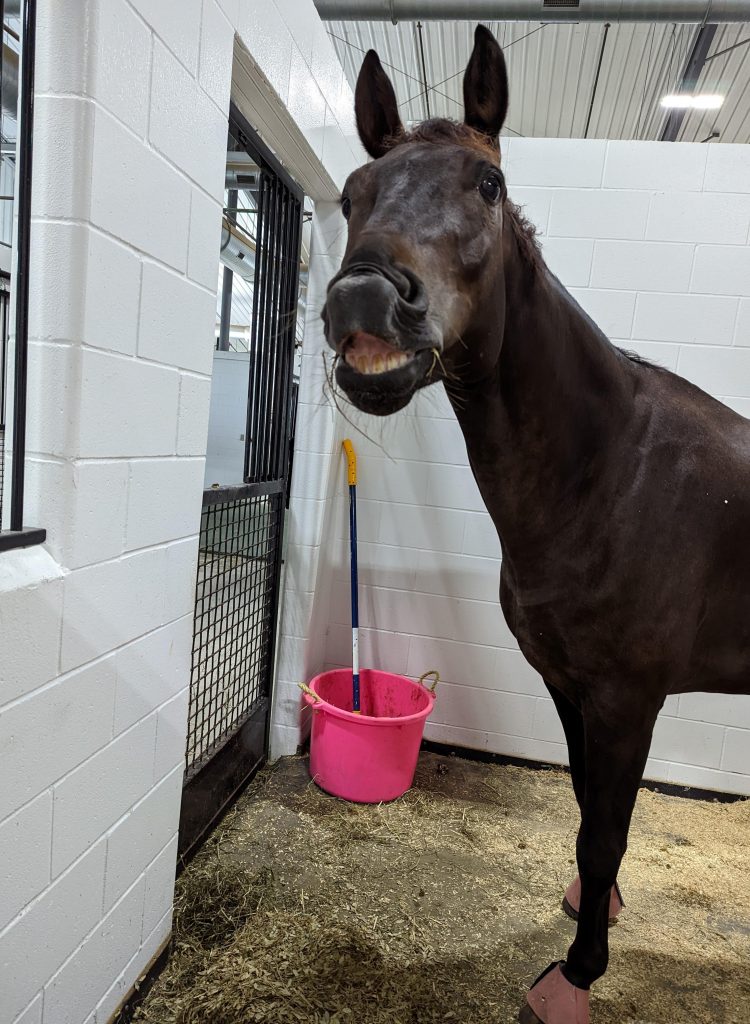 I cannot emphasize enough what a lovely, charitable thing The World Equestrian Center has done for our equestrian community here in central Florida. By offering their space sans any fees, and deeply discounting the cost of shavings, WEC has made it possible for some to evacuate who may not have otherwise been able to afford doing so.

I know that I am grateful to be able to have my horses there for the duration of the storm and as I walk the aisles, I see quite the menagerie of guests here — minis, donkeys, seasoned show horses, retirees, working horses, race horses, baby goats, a tortoise, and even a kangaroo (yes, you read that right: a KANGAROO. Who even knew that was a thing?)! 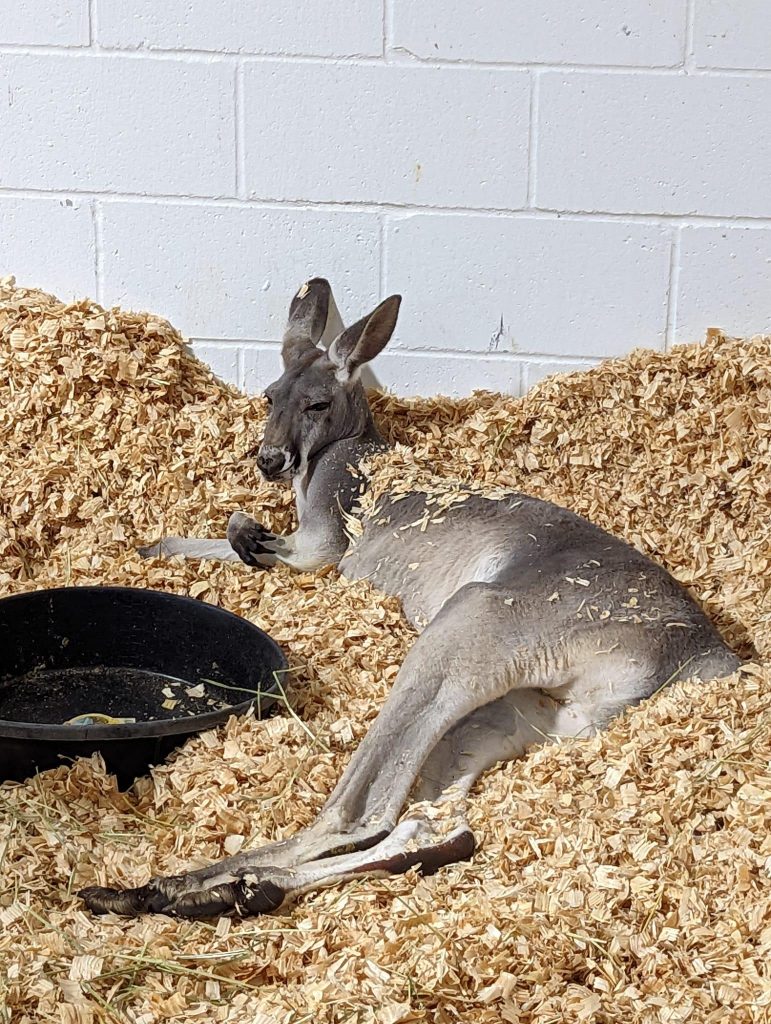 I wonder if he competes in the jumpers… *har, har, har…* Photo (c) Morgane Schmidt 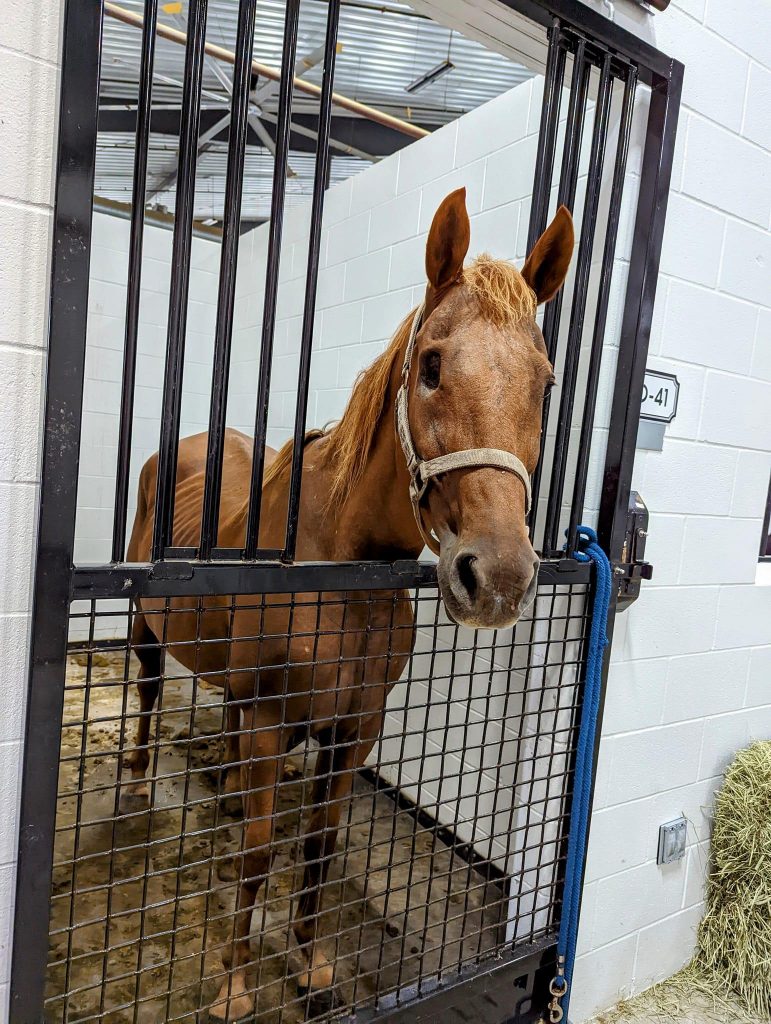 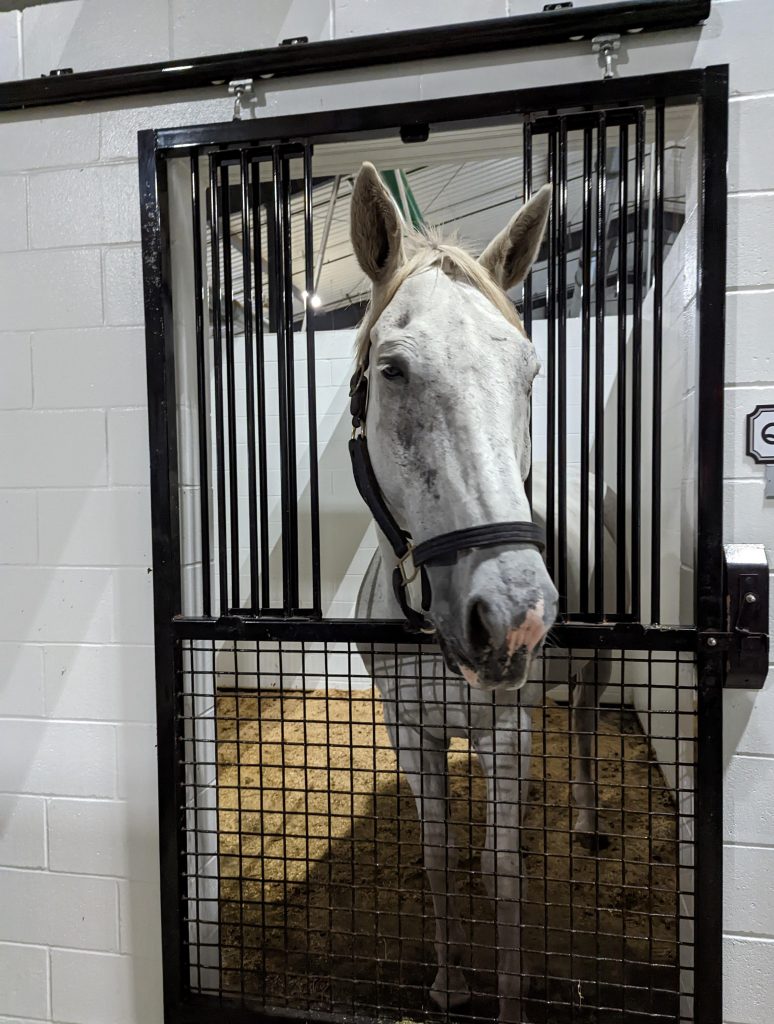 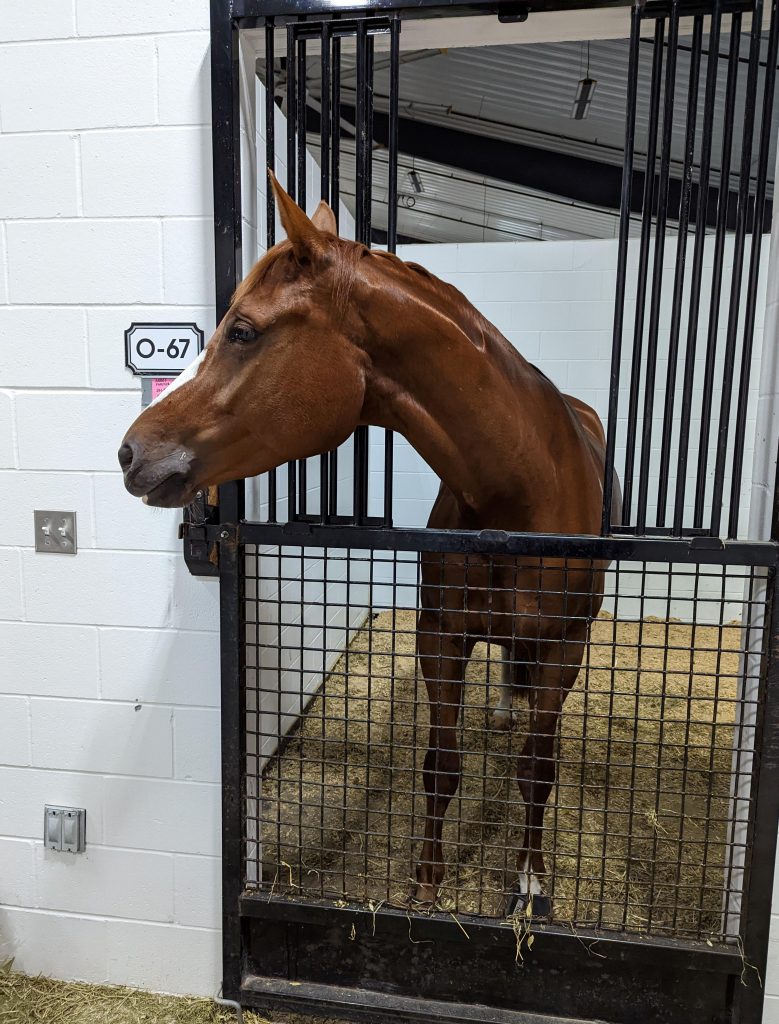 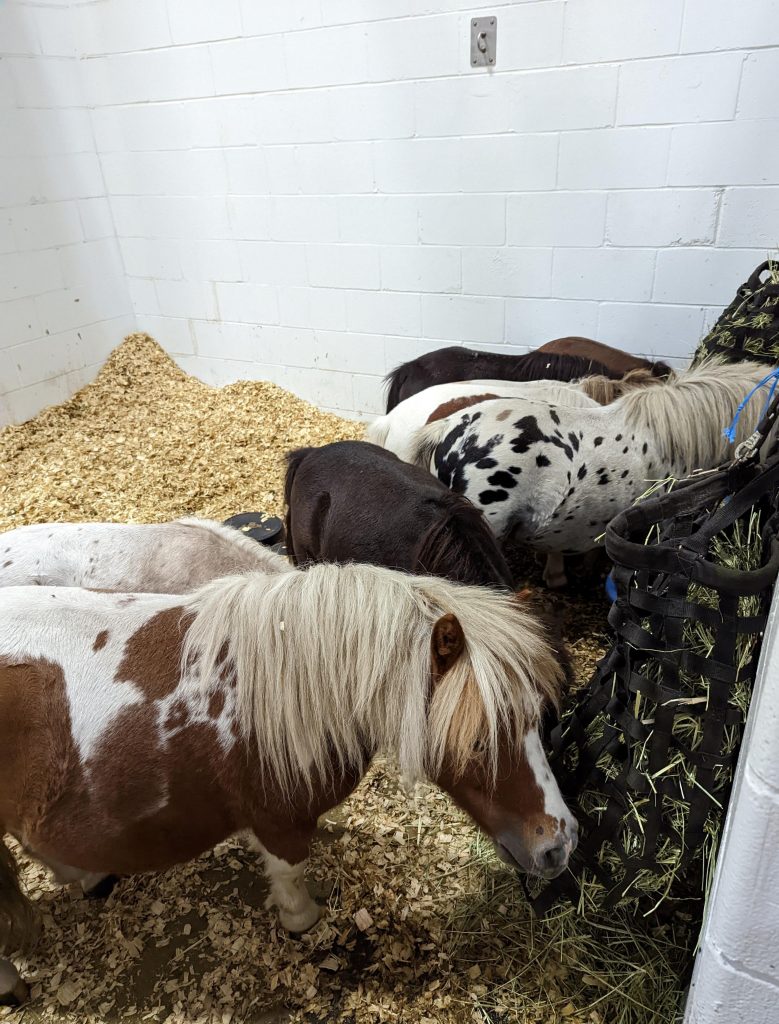 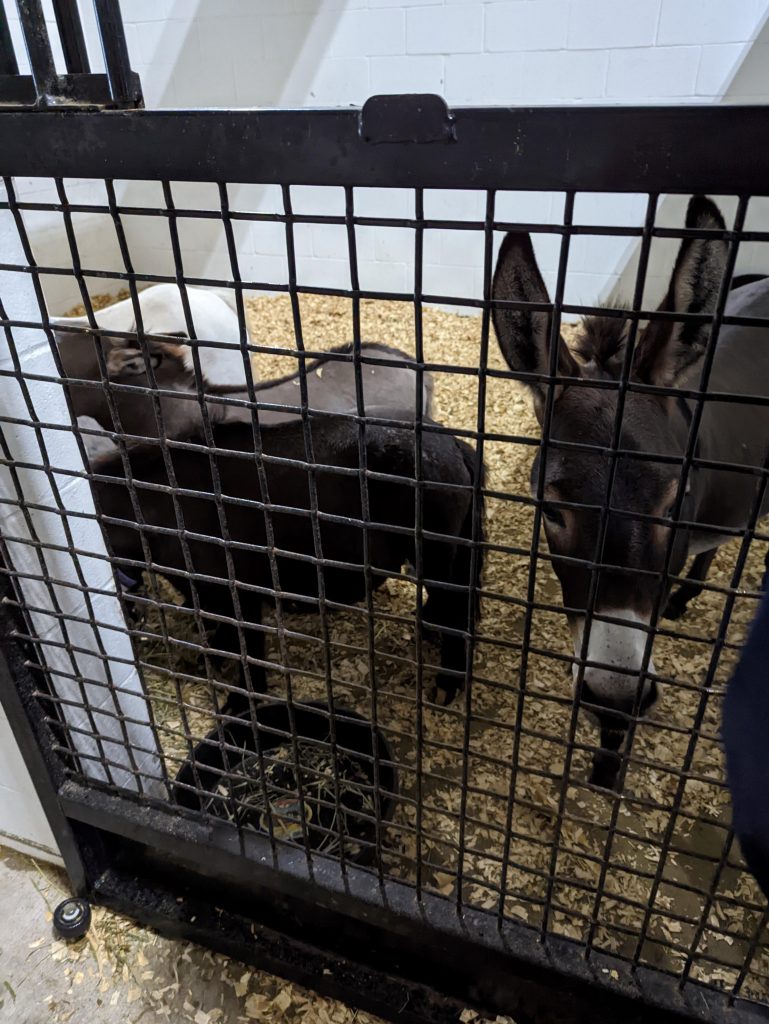 These guys were the sweetest. I may need a donkey now… Photo (c) Morgane Schmidt

In addition to WEC’s awesome hospitality, another company with a store located on site — Basic-Equine Health — set up a station with some of their gastric supplements for any horses in need who might be stressed or acting colicky (also free of charge)! While many of the evacuees are show horses used to trailering and sitting in stalls, there are many others who are not. And of course, even the most seasoned horse can be stressed out, particularly in a hurricane (or, perhaps, when it sees a kangaroo being ‘hand walked’

).  It was really a thoughtful gesture on the part of Basic Equine Health.

I recently used a course of their Ez Extra Gel on Milona after she attended her first show. It’s for hind gut upset and while she is a super good girl, she’s always been a little reactive to the canter aids and gets a bit jazzed up when she feels like I’m putting too much pressure on her (yes, I *KNOW* she is a red mare

). Anyhow, using the gel was pretty remarkable. She’s been soft, relaxed, and really coming through and over her back with zero anxiety. It’s literally the only ulcer/gut medicine I have used that I noticed a tangible difference in the horse. 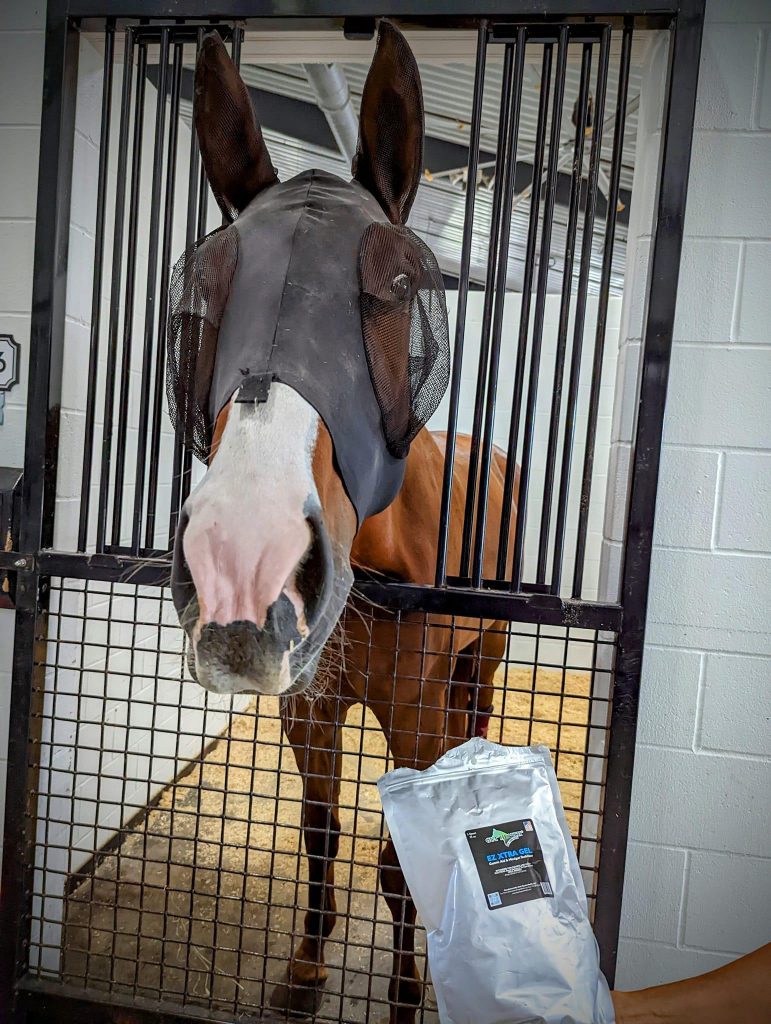 While no one enjoys natural disasters, sometimes, they’re just a fact of life. I am touched and grateful though that the equestrian community so often comes together for one another when things get hairy, and this is just what WEC has done.

A huge thank you to The World Equestrian Center for doing just that and being such a wonderful member of the Ocala equestrian community.

Morgane Schmidt is, among many things, an equestrian who still hasn’t quite decided what she wants to be when she grows up. Author of Life with Horses Is Never Orderly, she knows all about the madness that comes with the equine territory, having owned and competed horses in eventing and dressage for years. A lifelong fan of the classic equestrian cartoons penned by internationally renowned artist Norman Thelwell, she began her own comic series in 2011, sharing deftly funny reflections on life with horses on Horse Nation as well as her personal website. A native Floridian, she spent a decade in Reno, NV, where she was able to confirm her suspicion that snow is utterly worthless (she has since regained her sense and moved back to the Florida swamp). Though she has run the gamut of equestrian disciplines, her favorite is dressage. She has completed her USDF bronze and silver medals and is currently working on her gold. Generally speaking, her life is largely ruled by Woody, a 14.2 hand beastly quarter horse, Willie, a now beastly 12-year-old Dutch gelding, and Milona DG, a 5 year old KWPN chestnut mare (you can make your own inferences there…). Visit her website at www.theideaoforder.com. 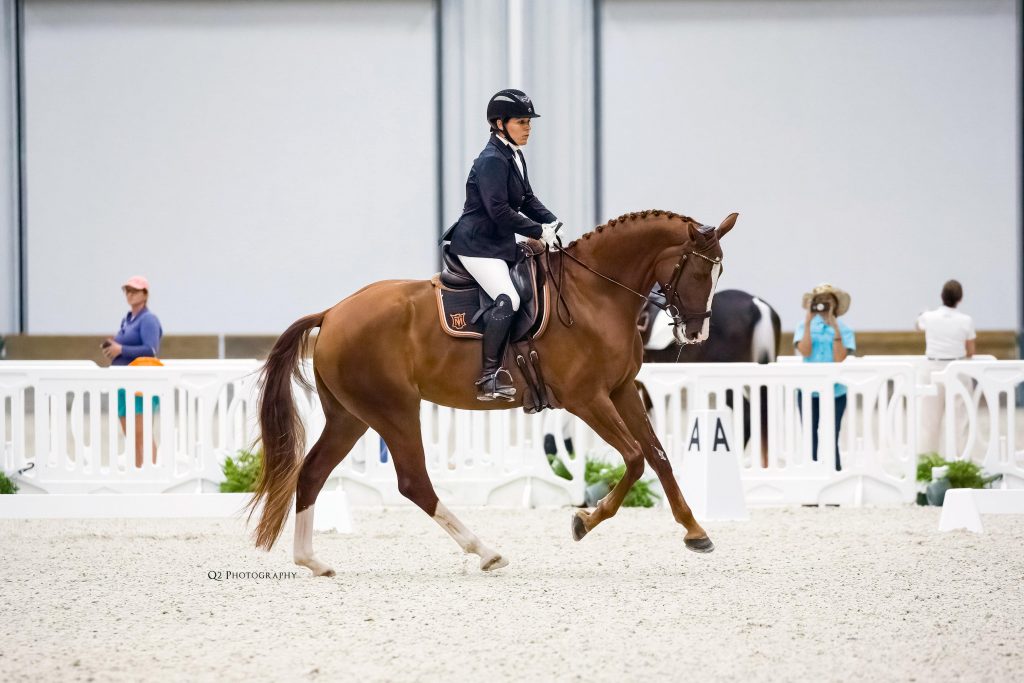