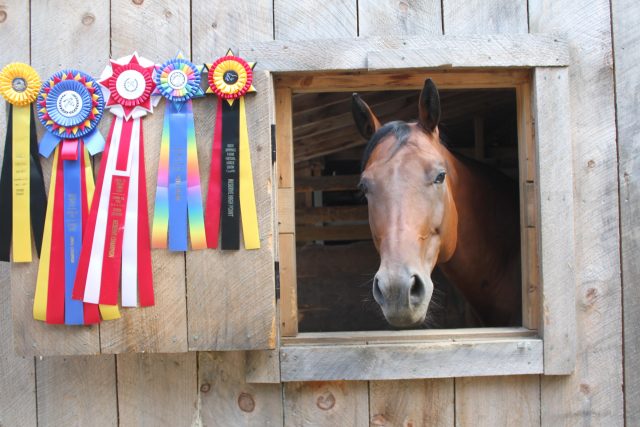 “These [online] shows gave riders an opportunity to continue to compete and to work toward goals that became an important distraction and comfort during those uncertain and tumultuous first years of the pandemic.”

Our finalists in the 2022 HN Blogger Contest are back with their Round Two submissions! For this round, we asked each of our finalists to highlight a business, entity, or organization doing good in the horse world. We’ll be sharing their responses this week — and we want to know what you think as a reader! Share your thoughts in the Facebook comments section. 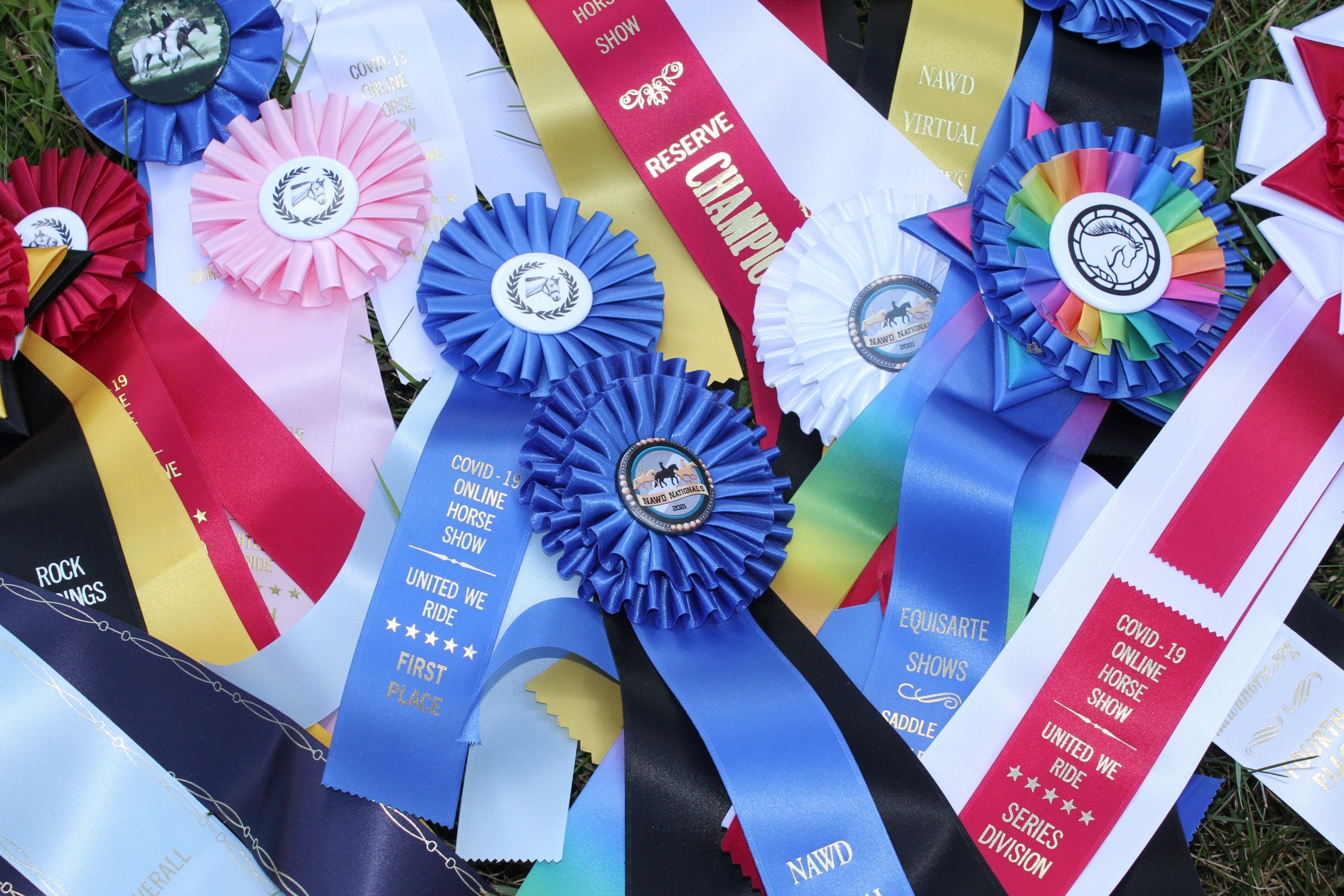 Many virtual shows award ribbons similar to the ones you would receive at an in-person show. Photo by Paige Cerulli.

In its earlier days, the COVID-19 pandemic brought many horse shows to a halt, threatening the livelihood of barns, the survival of riding clubs, and the dreams and goals of many horse owners. But as it had a way of doing, the pandemic inspired resourcefulness – and we all know that horse people are among some of the most resourceful, creative, and driven people out there.

So while in-person shows were cancelled, virtual shows sprang up instead. They were hosted by riding clubs, stables, show circuits, and even organizations as large as the American Paint Horse Association. These shows gave riders an opportunity to continue to compete and to work toward goals that became an important distraction and comfort during those uncertain and tumultuous first years of the pandemic.

How Virtual Shows Made a Difference

Virtual competitions solved the pandemic’s shutdown of live shows, but they addressed many other barriers to competition, too.

The biggest advantage? Virtual shows tend to be much more affordable than in-person events. They eliminate expenses like trailering, ring fees, stall rentals, use of horse fees, trainer fees, and more. Many virtual shows don’t require braiding or show attire, meaning riders who couldn’t previously afford to compete can do so virtually. A rider could compete in an entire virtual show series for less than they would spend on a weekend away at a traditional show.

Virtual shows also solve logistics issues. Because there’s no need to transport horses, it’s much more practical to enter just a class or two. Riders can film their classes on their own time, and many shows allow different riders to compete the same horse in the same class. There’s no need to take a weekend off of work, and as long as you plan ahead, you can avoid filming your classes during some of the hottest summer days. 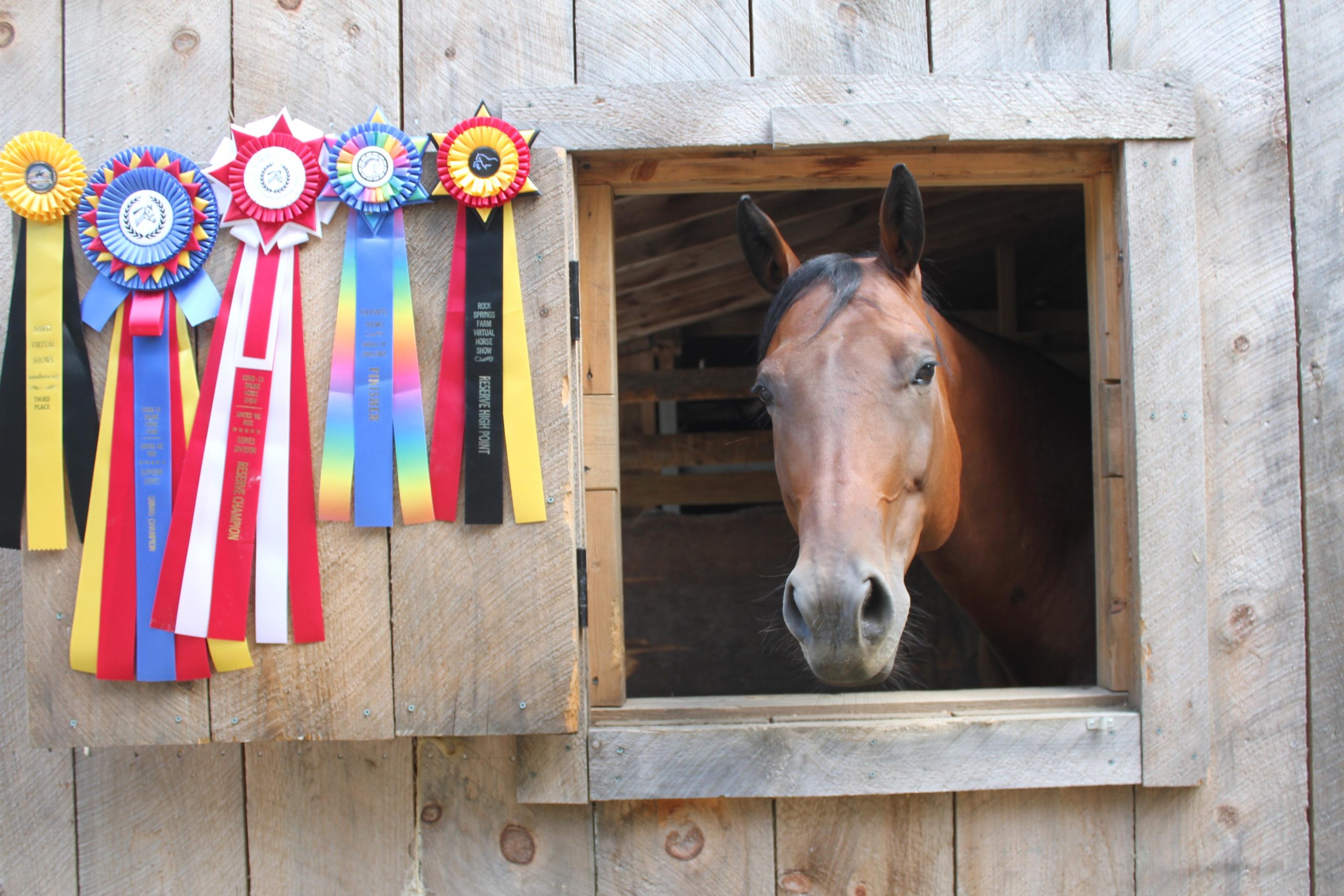 Paige’s Quarter Horse, Cricket, poses next to just a handful of the ribbons she’s won from a year of virtual show competitions. Photo by Paige Cerulli.

Since virtual show classes tend to be affordable, riders can test out new classes and get valuable feedback, sometimes included with results, or sometimes available for a small fee. Simply watching other competitors’ videos and seeing how they place can be a valuable learning experience, too.

In Gratitude of the Key Players

All of the benefits of virtual shows are only possible because of the hardworking people who make these shows possible. Show organizers had to be particularly innovative and flexible when creating these shows and series, and they had to be willing to take a risk on an idea that didn’t yet have proven success.

If you spend even a little time in the many Facebook groups for these shows, it’s quickly apparent that organizing them is no easy task. There are endless questions to answer, sometimes massive amounts of entries to manage, and, just like in-person shows, there are also complaints to address.

Virtual show organizers have the added pressure of dealing with the “want it right now” nature of society, too. Unlike in-person shows, where riders receive results almost instantly, results for virtual shows are often delayed by weeks after the entries are due. There’s pressure on judges and organizers to quickly post results, especially as riders are often filming and making entry decisions for the next show. Then, organizers deal with sorting out and mailing ribbons and prizes, which is no small feat in itself.

Thanks also needs to go out to the judges who are willing to be flexible and who often work off of less-than-ideal video footage. Shaky cameras, poor angles, and arena shadows make a virtual show judge’s job a challenging one. Because judges must watch each rider’s videos individually for every class, judging a large class can require a significant time commitment.

And, thank you to the riders who are willing to try something very different. When you’re used to the tradition of the show ring, competing via video is a major change. But it’s the riders who enter these shows that have given them life and kept them going. 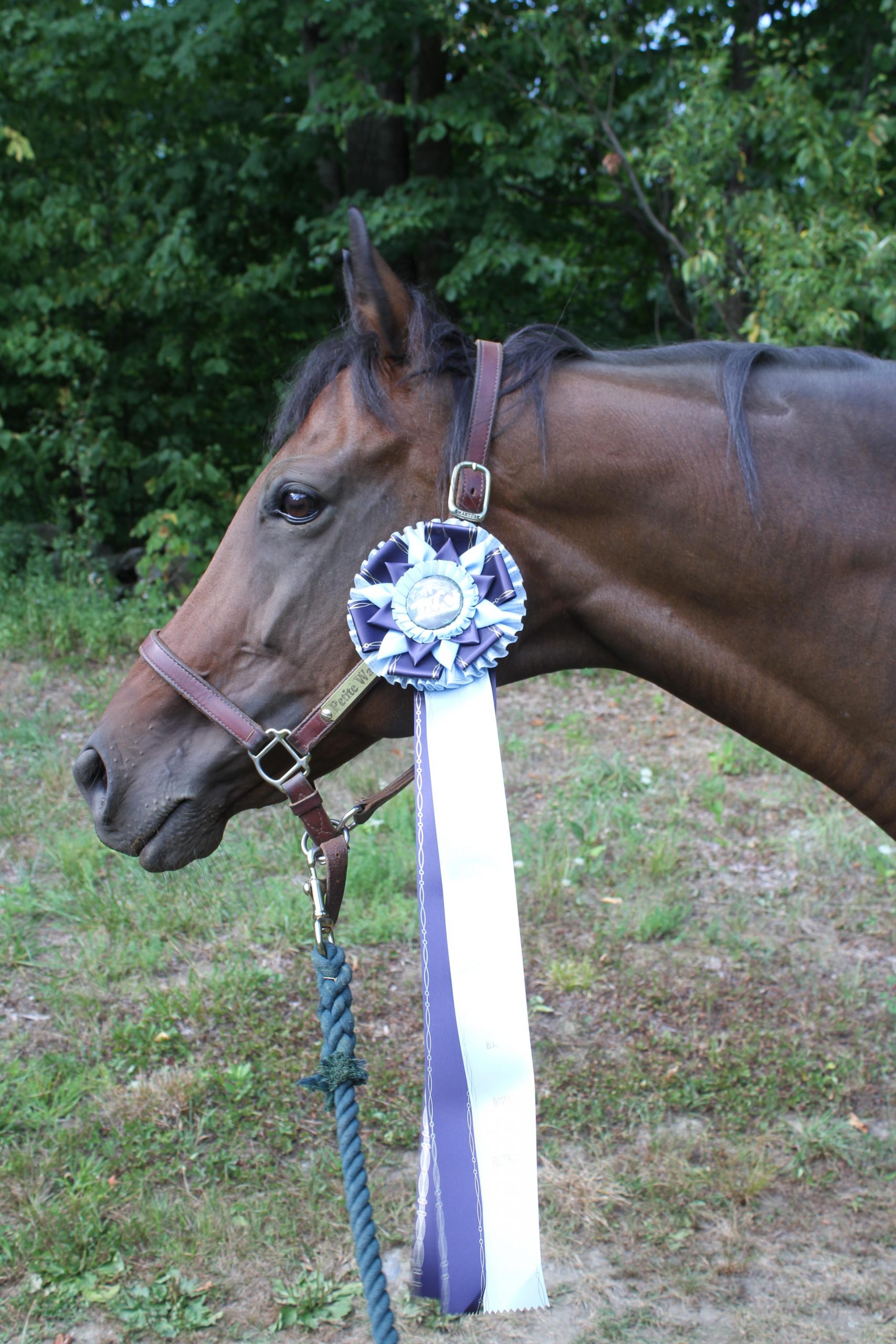 Petite Warrior shows off her championship ribbon, made possible by the walk-only dressage division offered by a virtual show. Photo by Paige Cerulli.

The pandemic may have spurred on the evolution of virtual horse showing, but it looks like the practice is here to stay, at least in some form. Many virtual shows now qualify for Open Horse Show Association (OHSA) points recognition. The American Paint Horse Association has continued its virtual series despite the reemergence of live competitions. While some show series have ended, others have launched just this year.

But virtual shows also gave me the opportunity to compete Petite Warrior, my Thoroughbred mare, for the first and likely the only time. The Black Diamond Equestrian show series offered a unique walk-only dressage division last year. Petite Warrior came to me with unsoundness issues and, despite years of treatment, remains unsound at the trot. Since she’s comfortable at the walk, I was able to make my dreams of getting her into the show ring come true, just for a few classes. She brought home the overall dressage high point for the show, and it’s my most treasured win.

Give It a Try

Ready to step into the virtual show ring? Here are a few show series to check out. Please note that inclusion of a series does not indicate an endorsement.

Paige Cerulli, 35, was bitten by the horse bug while in kindergarten. Since then, her life has centered around horses. Paige is a certified equine massage therapist and works full-time as a freelance writer. She is enamored with Thoroughbreds and grew up riding huntseat, but two years ago Paige went rogue and bought a Quarter Horse trained in ranch riding. She’s continued along with her equestrian identity crisis as she’s dabbled in liberty, Six Feet on the Ground, versatility and trail competitions, and more. Paige lives in Western Massachusetts where she shares her life with three horses (hopefully soon to be four), three cats, several foster animals, and a flock of ducks.