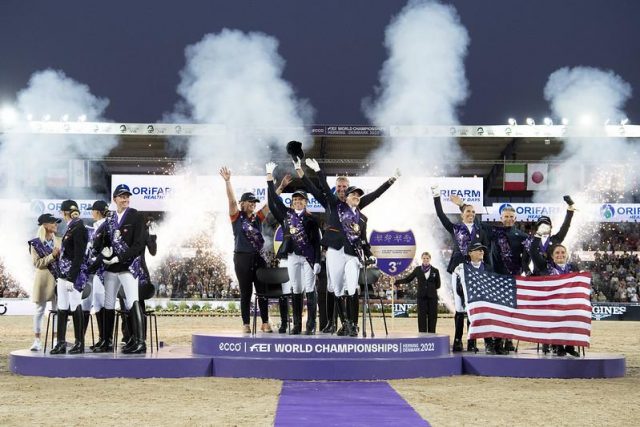 Check our these snapshots from Team USA’s podium finish in Para Dressage World Championships at Herning 2022! 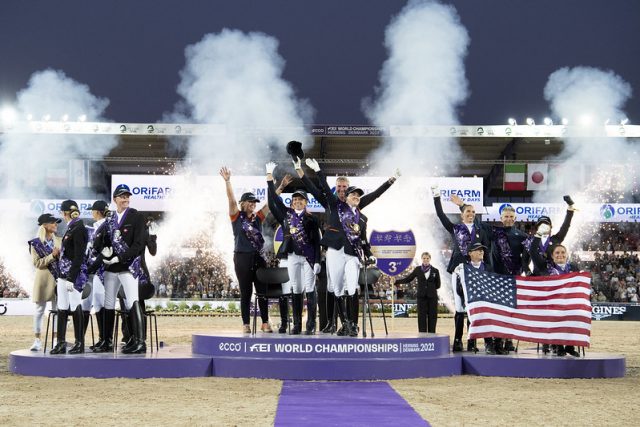 In a thrilling finale to the Orifarm Healthcare FEI World Para Dressage Team Championship in Herning (DEN) Saturday, The Netherlands successfully defended the world title they won four years ago in Tryon (USA).

In doing so, all three teams have secured qualification for the Paris 2024 Paralympic Games.

In the Team test, each Grade competes separately, and each combination of horse and athlete performs a series of pre-determined movements. The best three scores from each team are then combined, and the team with the highest score wins the gold.

Held over two days, the first day of the competition had left The Netherlands and Denmark in a strong position following high scores from Sanne Voets and Demi Haerkens (NED) in Grade IV and Katrine Kristensen (DEN) in Grade II.

Day two began with the Grade III team test, which featured the home team’s Individual test winner Tobias Thorning Joergensen, riding Jolene Hill. He was expected to deliver a big score and did, with 79.265%.

Rebecca Hart (USA), secured her country’s medal with an impressive 74.706% (though not after a tense wait to see what some other country’s riders could produce) on El Corona Texel.

Great Britain’s Natasha Baker, on Keystone Dawn Chorus, scored 73.676, leaving her teammate Sophie Wells with a big, but not impossible, task of scoring 78.400% or thereabouts to get on the podium.

At the end of Grade III, it was clear that the final medal positions would be decided in the Grade V test.

First up among the medal winners was Denmark’s Nicole Johnsen on Moromax. She scored 73.310%, leaving Frank Hosmar with a target of 75.297% to take the gold. Entering the arena a handful of riders later, he pulled out a stunning performance on Alphaville N.O.P. to score 75.786%, and retain the gold.

The top three positions were then confirmed when both Sophie Wells’ (GBR), and Michele George’s valiant efforts fell just short of the scores needed to edge the USA off the podium.

“We thought when we came here a medal would be nice but every day with the training it got better and better and we thought maybe there’s a little bit more. We didn’t expect gold when we left Holland but when we were here we were thinking it was possible.”

As the Dutch score was announced, team trainer and coach Joyce van-Rooijen-Heuitink let out a scream of joy which was heard around the arena. “I have never screamed so loud in my whole life,” she laughed. “They must have heard back in the stables that it was me. I just cannot describe it, I’m on cloud 26. We have two new riders and you never know what they do at a championships.

“I knew Sanne and Frank would deliver but the other two did as well. How cool is that?”

At the Tokyo 2020 Paralympic Games, Denmark had come agonisingly close to the bronze medal, finishing a horse’s hair’s breadth away from the USA. Speaking after the medal presentation, the team’s Chef d’Equipe Anette Bruun said: “I am feeling so glad. They were so sterling the riders today. It was such a fantastic event and we got the silver medal, it’s fantastic.

Speaking for the USA, Grade IV rider Kate Shoemaker, said: ”Talk about being on cloud nine!”

“We came with a very different team of horses than the one we took to Tokyo and our expectation was not for a medal, it was to qualify for Paris and then have a building year. But this shows our programme is going in the right direction. To be bronze with this young team is an amazing feeling. There’s something about when you strive for something that is just out of reach and then you grab it and hold tight.”

There will be more celebrations in the stables tonight, as the top seven teams at these Championships have qualified for Paris, so alongside the top three – the Netherlands, Denmark and the USA – the teams from Great Britain, Belgium, Germany, and Italy are also now officially on the Road to Paris 2024!

Sunday sees the top eight riders from each grade compete for the Freestyle titles. The music will play and the horses will dance in the sunshine on what is sure to be a celebratory and fitting end to a brilliant five days of sport.

You can view full results from Herning here — and tune in today for more action live on ClipMyHorse.TV!