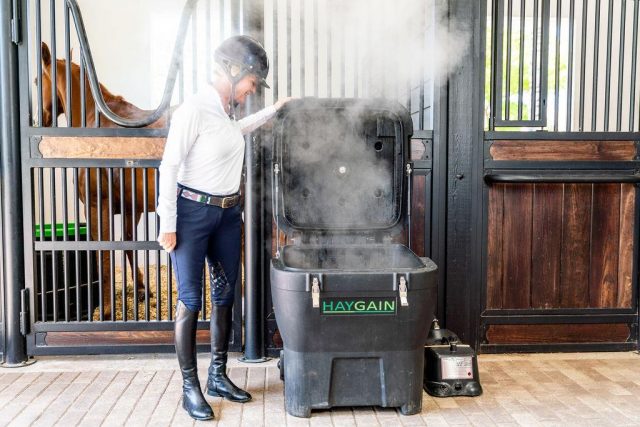 The ECCO FEI World Championships began in Herning, Denmark on Saturday, August 6th and Haygain is well represented by official members of its #SteamTeam. This edition of the World Championships features competition in dressage and vaulting, August 6-10, and jumping and para dressage August 10-14.

The Steam Teamers contesting these Games carry the flags of 12 different countries yet galloped to Denmark on the common ground of prioritizing their horses’ health above all else. That’s why they’ve come to rely on Haygain High Temperature Steamed Hay as an everyday part of their horse’s routine, whether on home turf or anywhere in the world. Ensuring consistently hygienic healthy hay is difficult to do when traveling the world and that’s a top reason these horsemen count on Haygain.

Haygain representation in Herning ranges from the U.S. Jumping Team fully comprised of devoted Hay Steamers to Ioli Mytilineou and L’Lartiste de Toxandra competing as an individual pair for Greece. Para-dressage competitors from Brazil, Great Britain and Canada complete a long list of those who won’t leave home without their Haygain Hay Steamer.

Teams from the United States, Great Britain and Germany won’t have to worry about getting their Haygains to Herning. The company is a proud corporate partner and official team supplier to these Federations. Haygain provides steamers at their training bases and to take to major international team competitions.

A visit with several of our Haygain World Championships horsemen reveals the wide range of reasons for steaming with Haygain. Here’s a few:

“We do not leave a stone unturned: the horses’ care and health are paramount. Traveling around the world, the quality of our hay is inconsistent. We have the peace of mind Haygain offers so that we can consistently count on a similar quality of hay. Haygain definitely makes a difference. Our horses are not coughing as much, they are breathing easier in work and when it’s time to eat, they’re all kicking down the door because they want to be the first to eat it!”

“The biggest thing for me is knowing that our horses have bacteria and dust free hay wherever we are stabling at a show or laying over. Outside of bringing our own hay everywhere, Haygain is the only way to keep the hay as consistent as possible and to be reducing the dust, mold and allergens in hay. That is super important to me. There are so many variables when you travel as much as we are, so the Haygain takes one of those variables out.”

“We used to wet their hay, but that washes the nutrients out. Steaming keeps the nutrients in the hay and that is critical for horses at this level of the sport.” 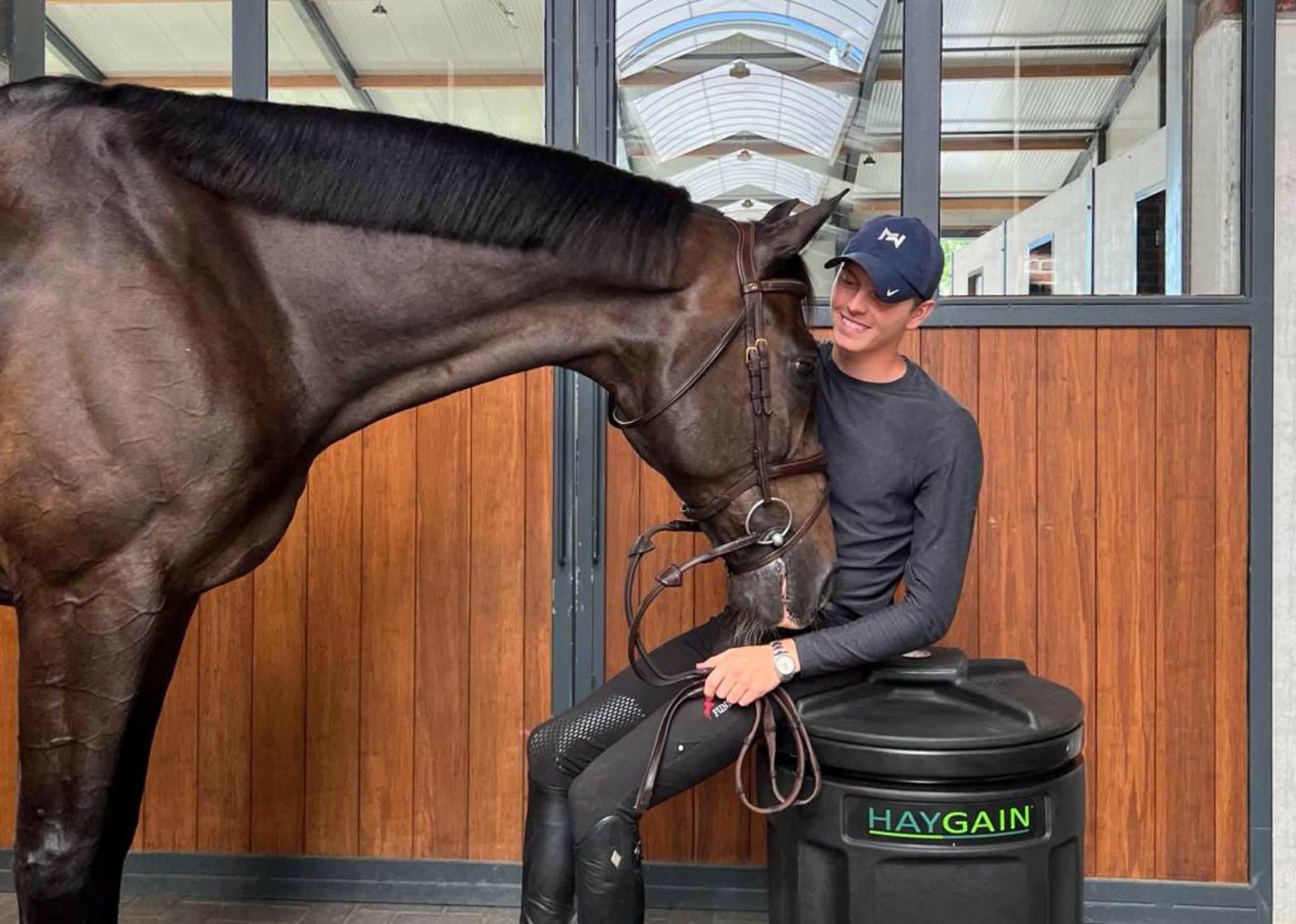 “We are incredibly happy to have added the Haygain Hay Steamer to our program, and quickly noticed an increase in the quality of our horses’ breathing, especially in those with respiratory problems. In addition, we’ve noticed the hay is easier to chew and digest which is always a concern for the older horses.” 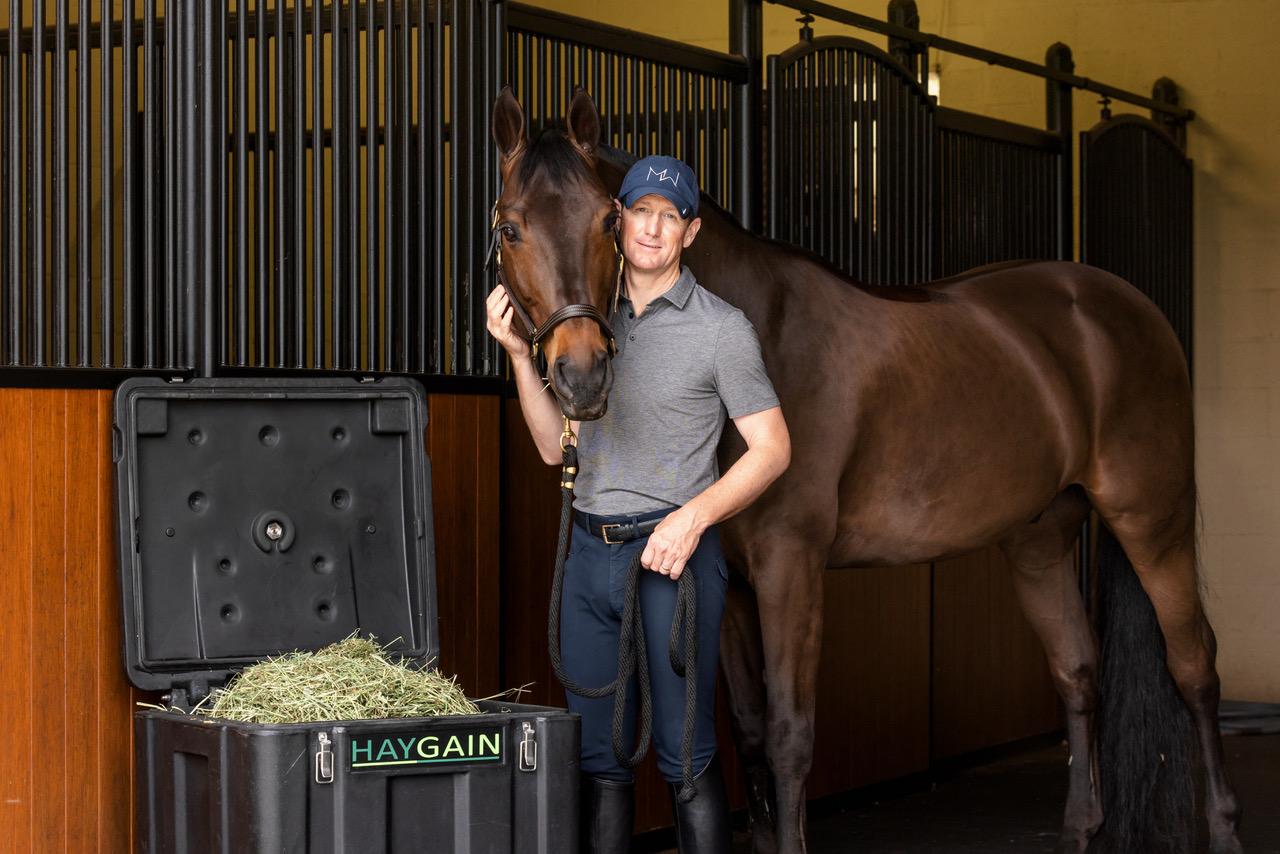 “I love using Haygain Steamed Hay because it helps improve my horses’ respiratory conditions and stopped them from coughing. With Haygain’s help, I can make sure the hay wherever I go is never dusty and it’s bacteria-free, so my horses don’t have any issues during competitions.”

“Haygain continues to be an integral part of our health program for our horses. We have seen great improvements in their performance and over all wellness!”

“The Haygain Steamed Hay smells so good I want to eat it myself. And the rest of the horses in the barn scream for it when we start steaming. It’s a fabulous machine that I can’t say enough good things about.”

“We like to keep things as simple and natural as possible. Feeding clean hay and having stables that provide cushion and comfort while reducing dust are great ways to accomplish that.” 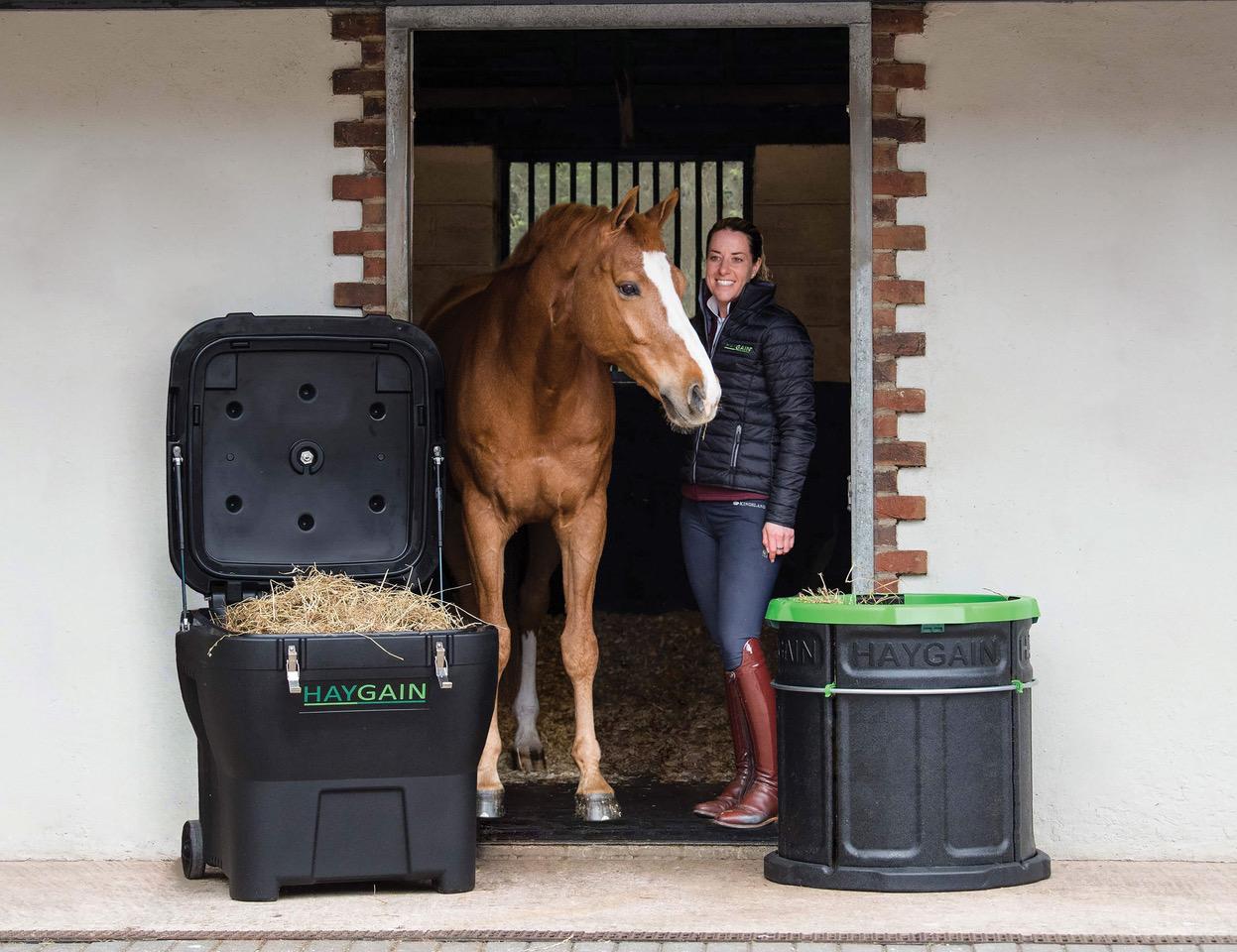 “We started because we had a horse with respiratory problems and it was advised by our veterinarian. Since then, we saw how much the horses like the Haygain Steamed Hay and how much better it made their hay.”

“It is hard to keep quality good throughout the year. With Haygain, I know that hay will always be without dust, bacteria or fungi and that it will taste good for the horses.”

“It’s a great product,” Mario says. His World Championships horse, Bardolina 2, was the catalyst for adding Haygain to the program when she lost her appetite for regular hay a few years ago. Already a challenge to keep weight on, the mare “needed all the hay she could get” but she had lost interest in what was presented at the time. “It was not up to par of the quality we usually buy. In particular, it was dusty. I think steaming the hay really helped.”

Mario and his daughter, Lucy, a frequent US jumper team rider, now have three Haygains for use at home and away. “Our horses love it,” comments Lucy.

“Horses at this level have to be able to jump 1.6M, and at speed. Respiratory recovery and the ability to access oxygen are critical, so respiratory health is a huge priority in our program. That’s why we don’t go anywhere without our Haygain Hay Steamers.” 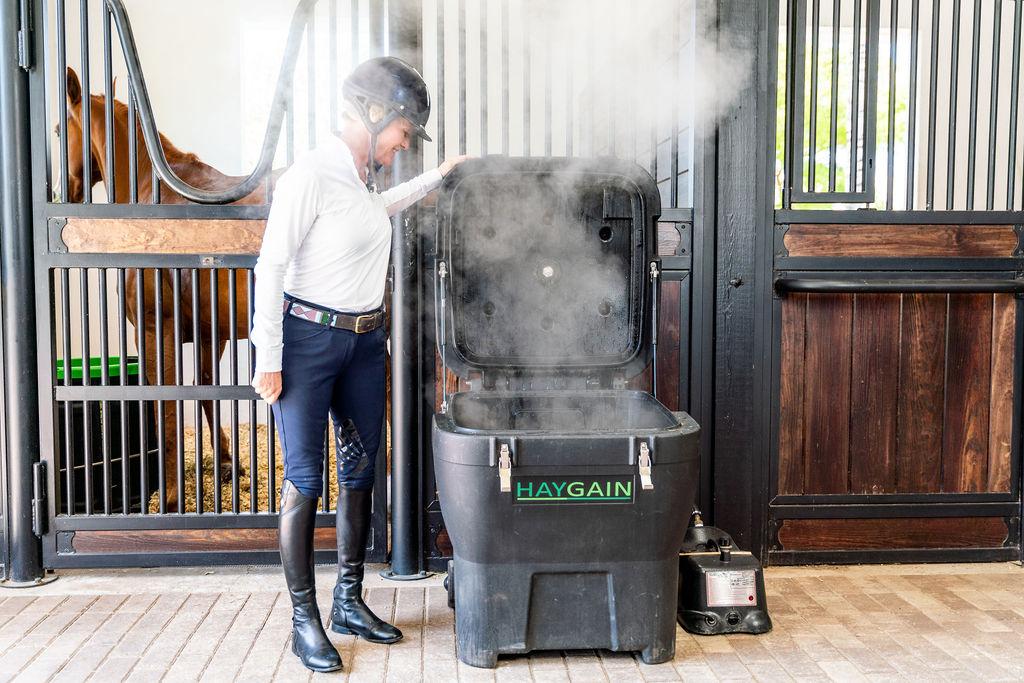 “In the beginning when I came to shows with my Haygains, I was one of the only ones. Now, honestly, everybody uses it. You go to a show, and there’s a row of Haygain machines. Horses need to have hay to eat nearly all day long and it needs to be good quality hay because it’s the thing they eat the most of.”

“Haygain really helps get the dust particles out of hay and haylage and that helps us be at the forefront of doing everything we can do for our horses’ health.” 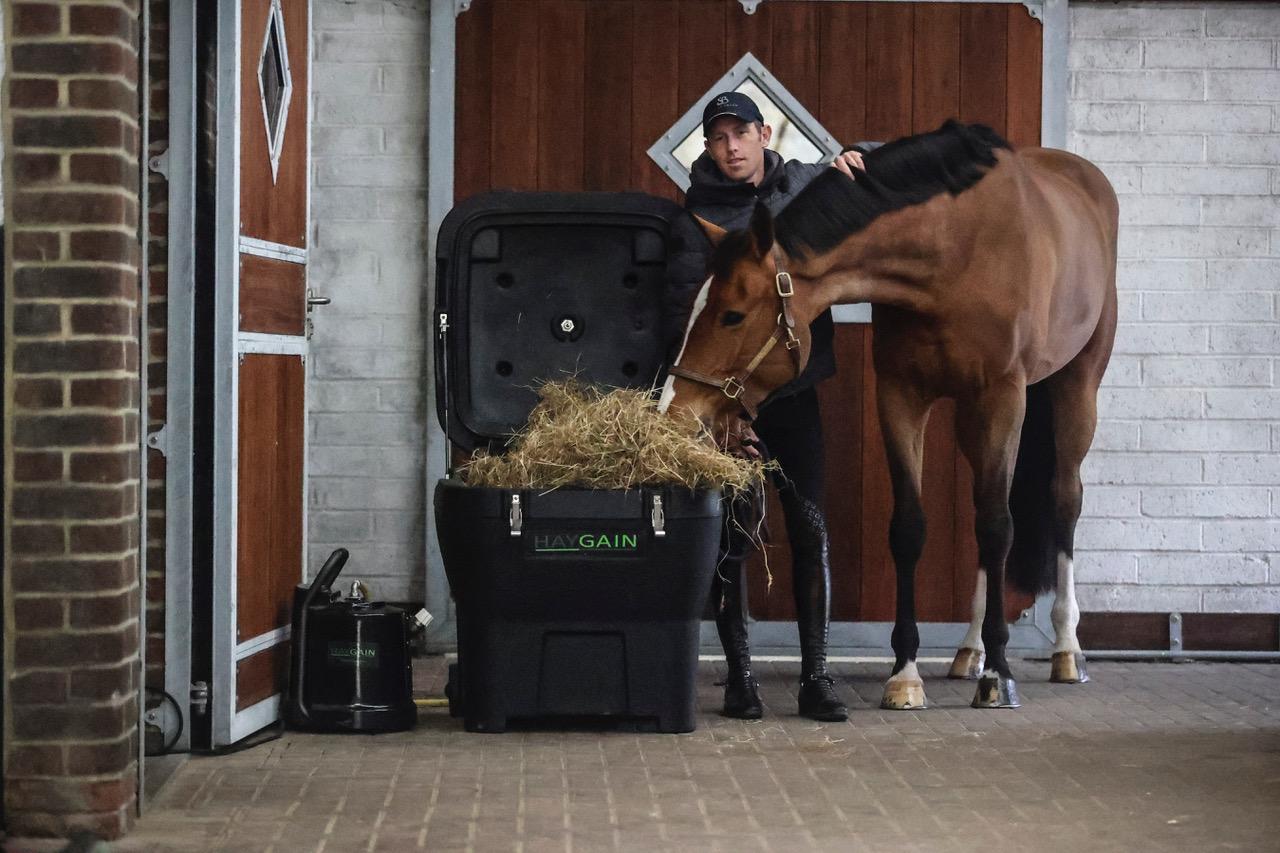 “We’ve used Haygain for as long as I can remember. It’s absolutely fantastic. Horses love the hay after it’s been steamed. This is how we make sure any dust is really extracted and the horses are eating only the best stuff.”

“We started off using Haygain with one horse and now all horses are on Haygain and we recommend it for all the horses we work with. It takes away all the bacteria, debris and impurities in the hay. And the horse seem to love it, which is nice. All the horses at Karlswood and Coolmore Show jumping are on it. Certainly, it’s become very popular. People wouldn’t be using it if they didn’t think it was working.”

“We’ve found that steaming really improves our horses’ appetite. They seem to really like steamed over dry and they choose to eat it a lot more than normal, dry hay. That’s important to us. It’s good for horses that have a little bit of wind problem, or who find it hard to catch their breath. And, for horses that have a lot of dust allergies.”

“I’ve noticed a good difference in my horses’ breathing. Especially at shows, where there is usually a lot of dust in the hay and in the barn.”

“We’ve been using Haygain Steamed Hay for about two years on our veterinarian’s recommendation. It works well and the horses love it. After the steaming is done, the horses know what time it is and they want it! We can really see the benefits in their fitness. We always travel with our smaller Haygain and we have the big one at home.”

“We had a few horses in work who are troubled by coughs and some who we felt were just not quite breathing as freely as we would have expected.  We have definitely noticed that the horses are breathing more freely and the irritation causing them to cough has been almost completely removed. The German team took two Haygains out to Tokyo to ensure that all the horses competing received the best possible care while they were there and it was a great relief to have them.” 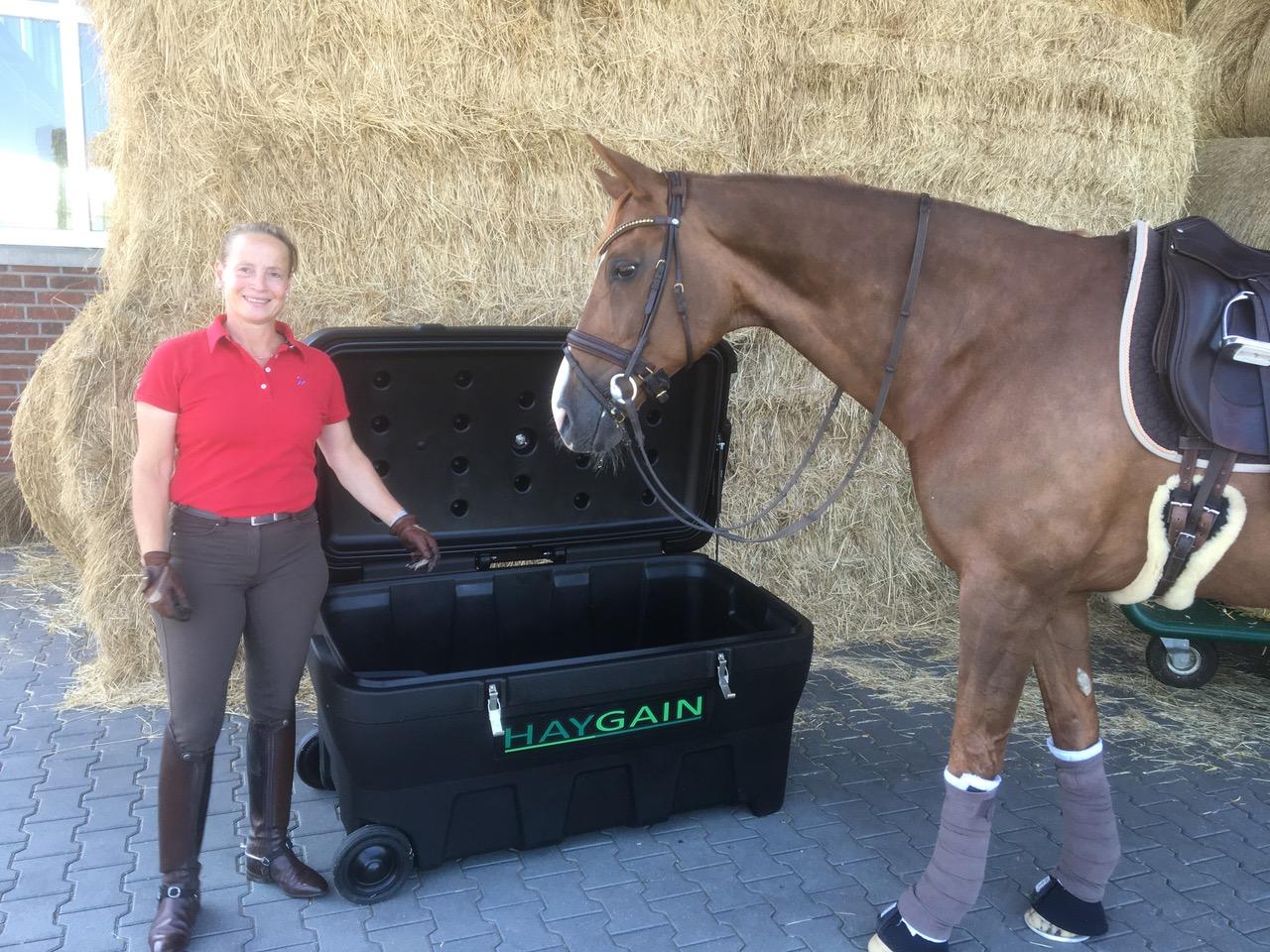 “Haygain continues to be an integral part of our health program for our horses. We have seen great improvements in their performance and over all wellness!”

“The Haygain Steamed Hay smells so good I want to eat it myself. And the rest of the horses in the barn scream for it when we start steaming. It’s a fabulous machine that I can’t say enough good things about.”

“First, Haygain is so much easier for us to prepare than soaking hay. Our horses eat three times a day and having to put that hay in water, wash the hay, then make the water go away is quite a process. Then, in the summertime, if the watered hay is left out in the sun, it’s not good. It ferments and grows bacteria, so it was all a little bit complicated to figure out with the grooms. Don Henrico would eat the watered hay in the beginning, but if it sat around for a few hours, he wouldn’t eat it anymore.

“Don Henrico eats everything that comes out of the Haygain. It is essential for our life.”

“My veterinarian, Dr. David Paton, recommended looking into a hay steamer as a good way of keeping the dust down.  It surprises me how much dust and allergens are in hay. The steaming really gets all that out. I’ve found it to be tremendously beneficial to reduce the dust and allergens. Haygain has completely resolved Onyx’ coughing issues.”