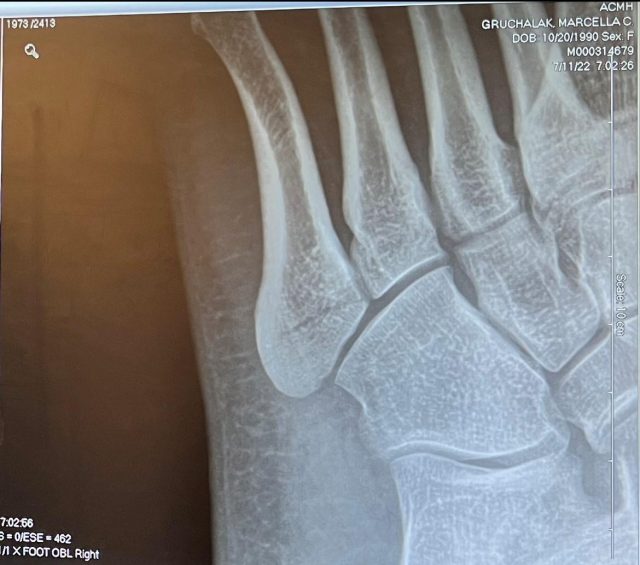 “From broken truck to broken foot to broken heart, it’s been one hell of a month on my mental and financial stability. I’ve been so fortunate to have some of the greatest people surrounding me, helping me get through the tough times.”

In my last article I unloaded the saga of my truck, Black Betty, breaking down. It was a whole ordeal, but I was grateful to have so many great people in my life helping me to get her back on the road and home. Before I get into other points of interest, I’d like to give a follow up on that story.

I consumed a lot of tums during my truck escapade but those days are FINALLY over!

One long month later I was happy to hear my truck was running and ready to make the journey home. I arrived at the Newcomers’ home eager to make the trip home with my truck and trailer. Approximately 30 minutes into the four hour drive home a blinking check engine light illuminated on the dashboard. It couldn’t just be a check engine light for a simple sensor or something of that nature. Nope, it had to be blinking, which meant the motor was misfiring — I knew it was. I could feel the truck idling like complete $h!t. My heart sank. I called my dad who was following behind me and he suggested we try limping it as far home as we could in hopes to have it towed the rest of the way so the local shop I used could diagnose it.

Five hours and a severe thunderstorm later, I was able to baby the truck and trailer the entire way home. I was heartbroken that I had sunk a substantial amount of money into the truck and it still wasn’t fixed. However, it was home and I could now take it to a shop I knew and trusted to get an expert opinion that I felt held some weight — even though it was the truth, I didn’t like what they had to say.

That very next morning I called the shop, Tune the City, to take my truck down in hopes of a resolution. There was a resolution, but still to this day, I don’t like it. After some diagnostic testing the resolution was this: get out of the hole before I dig myself deeper. It was time to retire Black Betty and buy a new truck.

Really? THAT was the best option? Ugh, I was trying to milk driving Black Betty for as long as possible. For one, the market for any type of vehicle really blows right now and for two, vehicles are expensive as crap. I really wanted to gravel my barn driveway, finish my arena, redo my basement and buy holds for my climbing wall. Nope. My entire savings went into buying a new-to-me truck so I could afford the payment.

The search for a new truck began. I knew what I wanted, a four door, short bed, white Dodge Ram Cummins. However I’d take nearly anything that was on the lot (except for one brand that I’ve had trouble with in the past). I wasn’t going to be picky with the market — just something that would get the job done.

I went to the first dealership closest to my house and asked if they had any used diesel trucks. They said they only had one that wasn’t the brand I was avoiding. They pulled it around and there it was, a four door, short bed, white Dodge Ram Cummins. I couldn’t believe it. It was meant to be.

After spending the entire afternoon at the dealership, I traded in Black Betty on the new and improved Betty White. My entire savings was gone, but at least I had Bluetooth — an upgrade from not even having a radio in Black Betty!

Within the next week I was hoping to have my truck tow ready. The truck already had an existing fifth wheel attachment, I just needed to convert the fifth wheel to a gooseneck and back to horse shows I would go.

Tune the City was nothing short of amazing. Within days they had the attachment, got me in and switched it out lickity split! The process was painless and the job — of course — was top of the line! I was ready to tow and I did just that! 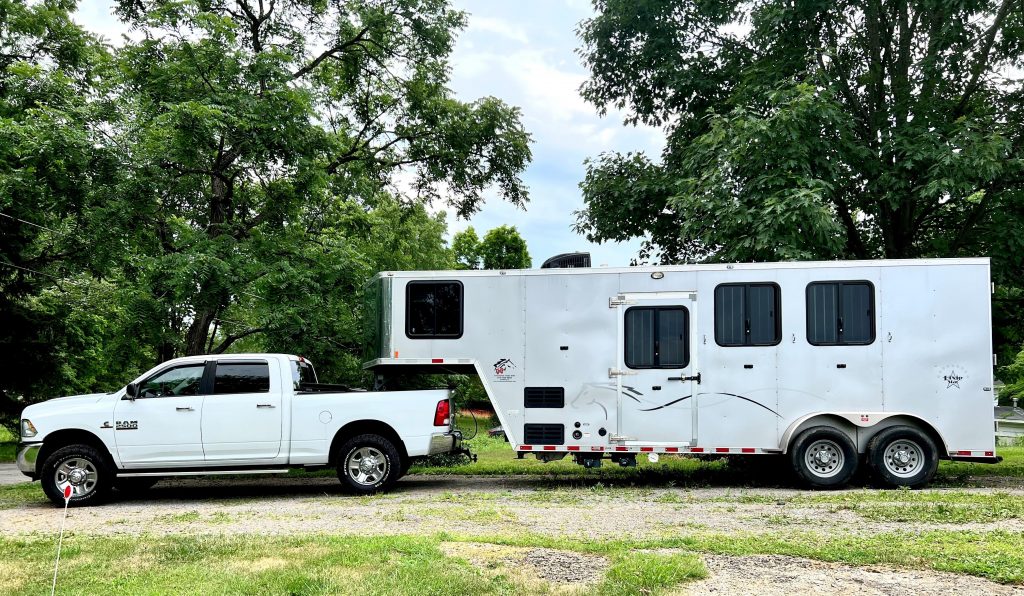 Over a little more than a month off from shooting allowed me to reset and I was ready to get back to it with Payco. I was ready to resume competing on my new team mate. My approach this time was to take all the pressure off and just enjoy the ride. Enjoy figuring him out and letting him do his job.

To my surprise, it paid off! We had a fantastic weekend. Usually Payco is good for blowing me off at least one pattern a day. Not this weekend! We had not one, not two, but eight consecutive beautiful, clean runs. Our lines were nice, the cueing was the best it’s been and the shooting was great as well. We didn’t win anything, but I was on cloud nine. It was a great feeling to be enjoying my horse. I returned home in the best of moods.

That quickly went by the wayside. That very night I broke my foot. For the sake of the length of this article, I will not elaborate on that story. However, I will say it was not horse related. It’s funny how all your goals for the year can change in an instant.

I cried at the thought of not making it to the CMSA four-year-old Futurity with Payco. I was working so hard for us to have a successful showing. We were just getting it and boom! Goals shattered. I still cry about it. It’s a touchy subject.

The type of fracture I have is called a Jones Fracture. This fracture is in the fifth metatarsal — so the bone that comes up on the pinky toe side of the foot. My doctor says that recovery time is approximately three months, but Google says anywhere between six weeks to three months. I’m hoping for a six week recovery time. 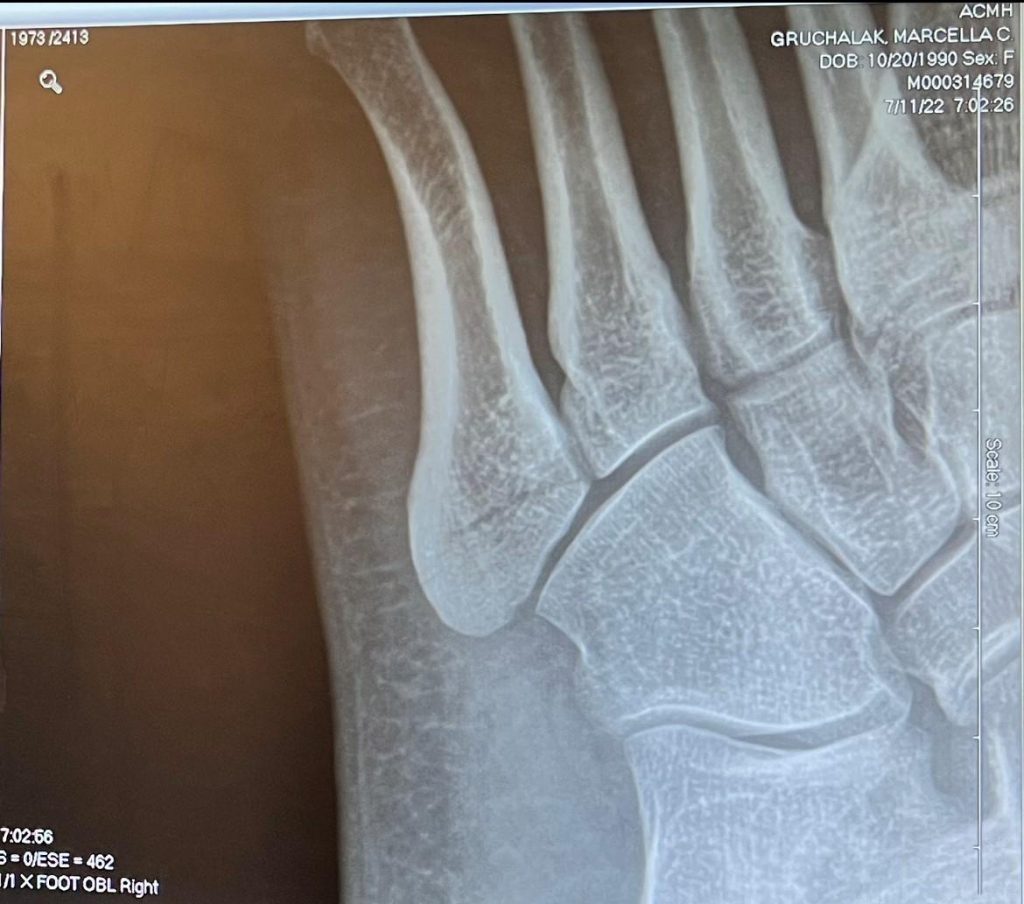 Self rehab has been extensive. Between icing my foot, red light therapy and range of motion exercises in my pool, I am trying to do everything I can to heal at the fastest rate possible. My next doctor’s appointment and x-ray is on August 4th which will be approximately a month from the initial break. I’ll know more then if participating in the CMSA Futurity is a farfetched dream. 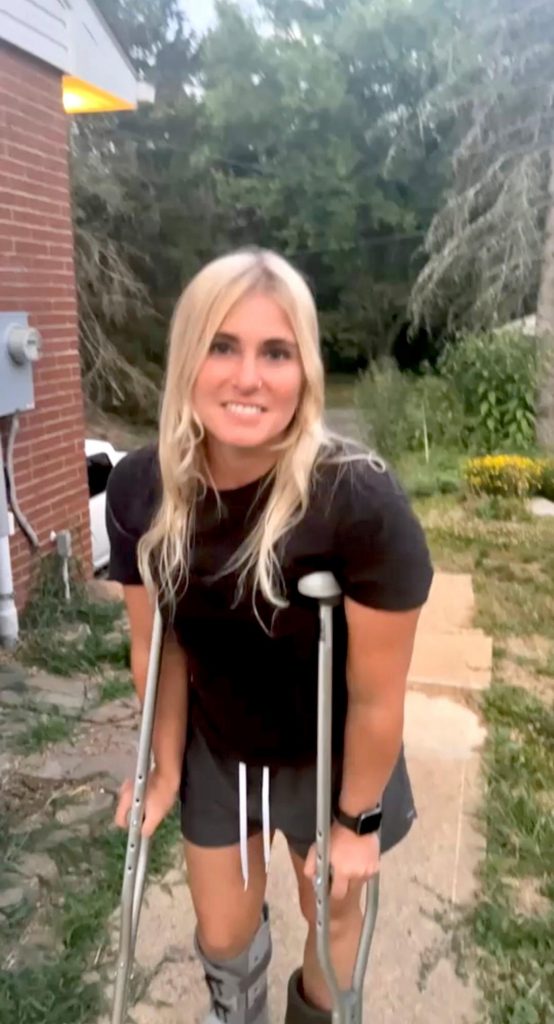 From broken truck to broken foot to broken heart, it’s been one hell of a month on my mental and financial stability. I’ve been so fortunate to have some of the greatest people surrounding me, helping me get through the tough times. Friends who come every day to feed horses, help with yard work and clean the pool. Other friends providing moral support by bringing over dinner and wine or taking me out to get something to eat. Friends running me around to do errands and get to doctor’s appointments since it just had to be my right foot I broke.

While I feel like complete $h!t between the pain of my foot and feeling let down emotionally, I am so completely grateful and blessed for those that have been there for me. I will never be able to repay them, yet they still offer their assistance. It’s these type of people that reassure you that everything is going to be okay.

In all this downtime I have realized the importance of having an exceptional support system. It is not how many people you have in your life, it’s having a few great people that look out for you and your best interests. It’s hard to find those kinds of people today, but I’m lucky to say I have found quite a few.

To end on a lighter note, I would like you all to get a chuckle at the amount of walls I’ve collided with on my knee scooter. As well as the two sorry souls I wrecked into at the grocery store. If I’m going to be broke, so is everyone else… Just kidding!