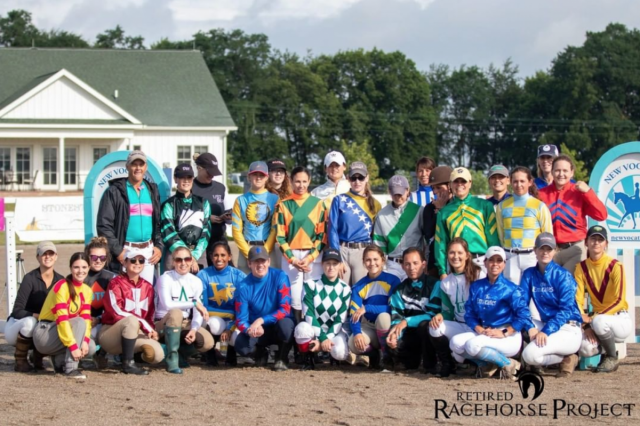 Lexington showed up in force to show its support for OTTBs at last weekend’s The Real Rider Cup, raising over $90,000 for Thoroughbred aftercare. Next stop for this super series: Fair Hill!

Real Rider Cup welcomed 30 horse and rider combinations along with hundreds of spectators to New Vocations at Mereworth Farm Saturday, July 9th for an evening of lively competition and entertainment. Created by Anita Motion, the charity show jumping competition brings together personalities from across the breeding and racing industry to increase awareness and raise funds for Thoroughbred aftercare, with each rider pledging to raise at least $1,000.

Offered for the first time in Lexington, the racing community embraced the Real Rider Cup concept in phenomenal fashion, nearly doubling the event’s previous fundraising record, bringing in over $90,000 and counting.

Awards were given for individual results, as well as teams (riders were given the option of forming their own team or to be assigned to one based on their industry background).

“We are totally overwhelmed by the response to the Lexington event,” said Real Rider Cup founder Anita Motion. “It is so apparent that retraining and aftercare are at the forefront of people’s minds and we are incredibly grateful to all the riders and sponsors that worked so hard to make the show possible and to all that came to cheer them on. Lexington really threw down the gauntlet, and we’re excited to return to our home in Fair Hill to see how the mid-Atlantic region will respond.”

With the second leg of the Real Rider Cup to be held at Fair Hill September 16th, the games have just begun as there is still plenty of time to get involved. Rider registration is open through September 9th with a variety of sponsorship packages available.

The Retired Racehorse Project (RRP) is a 501(c)3 charitable organization working to increase demand for off-track Thoroughbreds in the equestrian world. In addition to producing the Thoroughbred Makeover and National Symposium the world’s largest and most lucrative retraining competition for recently-retired racehorses, the organization also publishes Off-Track Thoroughbred Magazine, produces the Master Class retraining clinic series, and presents programming at major horse expos and events around the country. The RRP maintains an educational library of content to empower more equestrians to ride a Thoroughbred.

Founded in 1992, New Vocations has grown into the largest racehorse adoption program in the country. Its mission to rehabilitate, retrain and rehome retired Thoroughbred and Standardbred racehorse has led to the placement of over 7,000 individuals, with 500 retirees entering the program each year. With facilities in Kentucky, Louisiana, New York, Ohio and Pennsylvania, New Vocations serves over 40 racetracks, working directly with owners and trainers in need of aftercare options.