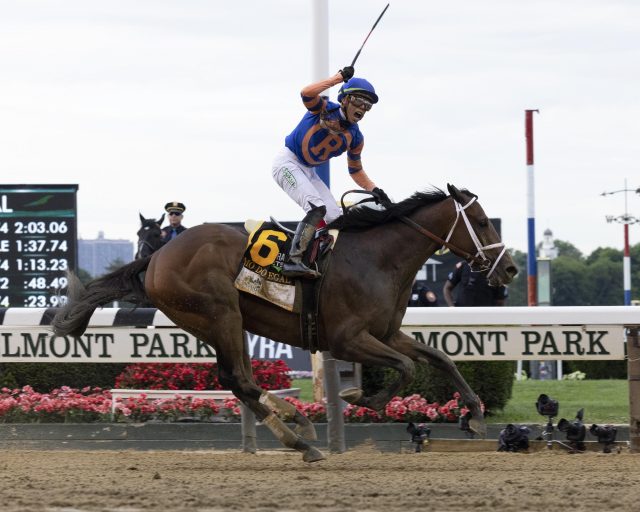 June 13, 2022DeAnn SloanContributor#BELMONT STAKESComments Off on Pletcher Trained ‘Mo Donegal’ and Filly ‘Nest’ Score a One-two Punch To Win and Place in the 2022 Grade 1, $1.5 Million Belmont Stakes for the Connections of Donegal Racing and Repole Stables

‘Mo Donegal’ won the Belmont Stakes on Saturday. ‘Talking Horses’® by Dr. Gregory Beroza, aka HorseDoc®, has the scoop. 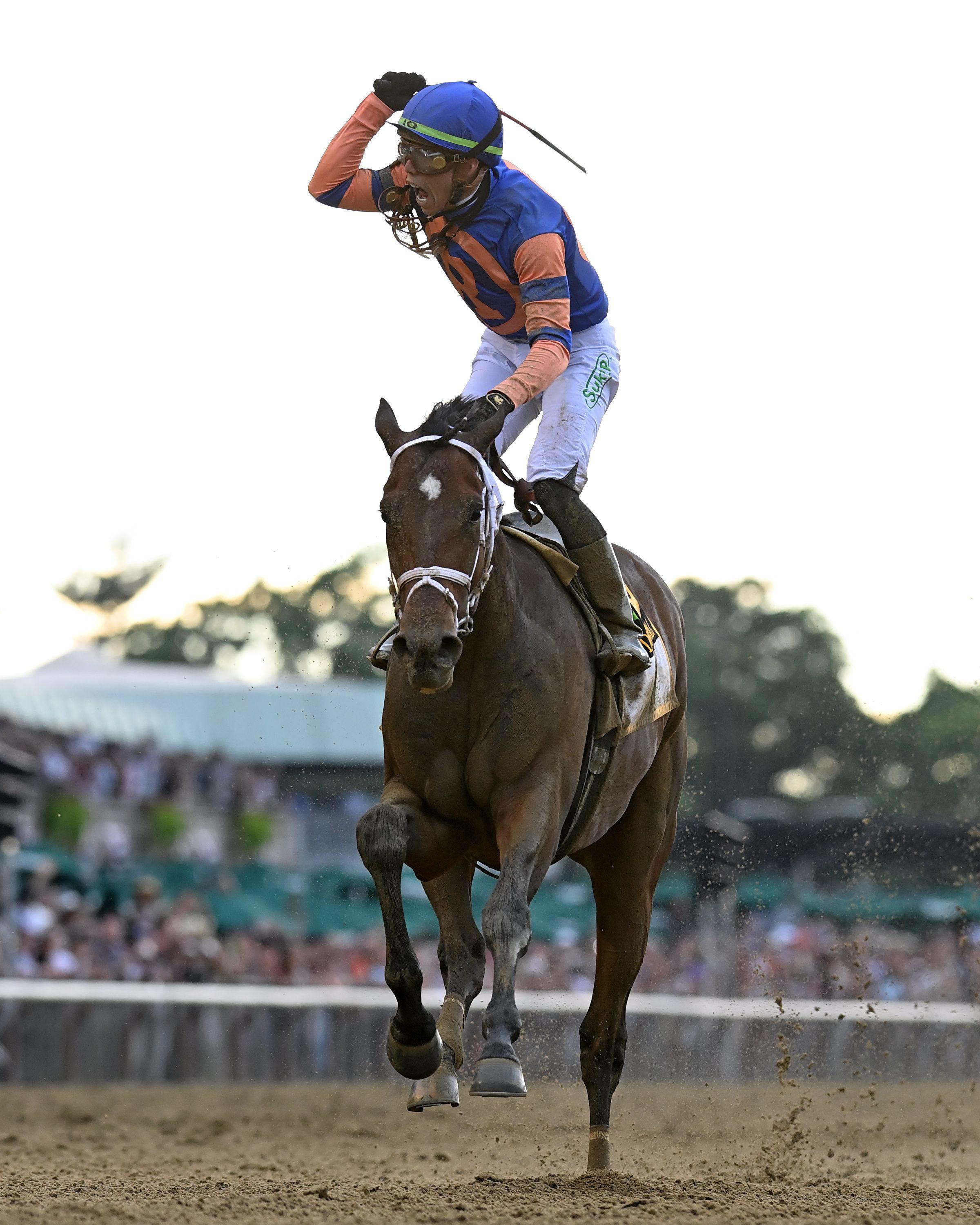 ‘Mo Donegal’, the 5-2 odds favorite, won the 1-1/2 mile 2022 154th Belmont Stakes on June 11th during a unique Triple Crown series filled with controversy. The three length victory marked the fourth Belmont Stakes win for Hall of Fame trainer Todd Pletcher. His former wins included filly Rags to Riches [2007], Palace Malice [2013], and Tapwrit [2017]. Pletcher touted his sense of accomplishment by successfully competing in the 1.5 mile ‘Test of Champions’ as a hometown favorite. In his career, he has achieved four wins and several seconds.

Michael Repole co-owns Grade 1-winning and second place finishing Nest with Eclipse Thoroughbred Partners and Michael House. Repole, a Queens native, previously regretted finishing a close second with Stay Thirsty to Ruler On Ice in the 2011 Belmont Stakes. Getting a first and second in the 2022 Belmont makes up for that. It was the biggest goal of his racing life. Mo Donegal is by the Repole/Pletcher campaigned Uncle Mo, who captured the 2010 Breeders’ Cup Juvenile and received 2-Year-Old Colt honors. The 2-Year-Old Colt is out of the Pulpit mare Callingmissbrown. 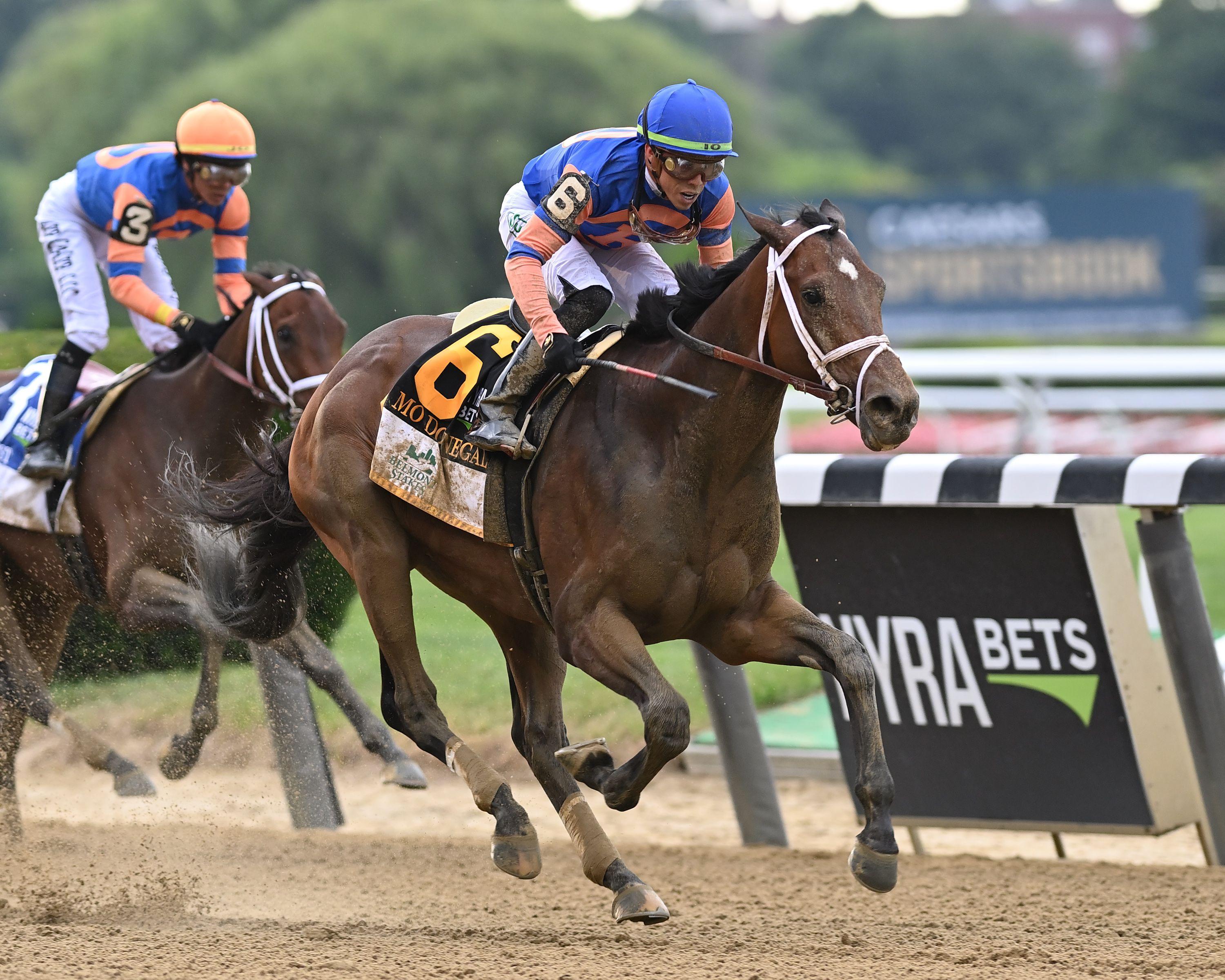 The one-two punch with Mo Donegal and Irad Ortiz, Jr. in first, and Nest and Jose Ortiz in second. Photo by A. Coglianese/NYRA.

During the awards presentation, Jerry Crawford, owner of Donegal Racing, thanked all his partners. He commented that today’s victory proves that the sport of horse racing is more accessible than many people realize. He complimented trainer Todd Pletcher and jockey Irad Ortiz, Jr. for the great job they did preparing Mo Donegal.

Nest, the second place finishing filly, stumbled coming out of the gate. With jockey Jose Ortiz aboard, she then advanced up the rail down the backstretch to stalk from third position to the inside of Mo Donegal. We the People, the presumptive speedster,  took early race command under jockey Flavien Prat and initially led the field of eight horses. Jockey Manny Franco piloted longshot Skippylongstockiong, constantly pressing We the People from Skippylongstocking’s second position. The Grade 1 Kentucky Derby winner Rich Strike, who lathered up during his pre-race excitement, unexpectedly trailed the field throughout most of the race with jockey Sonny Leon aboard. 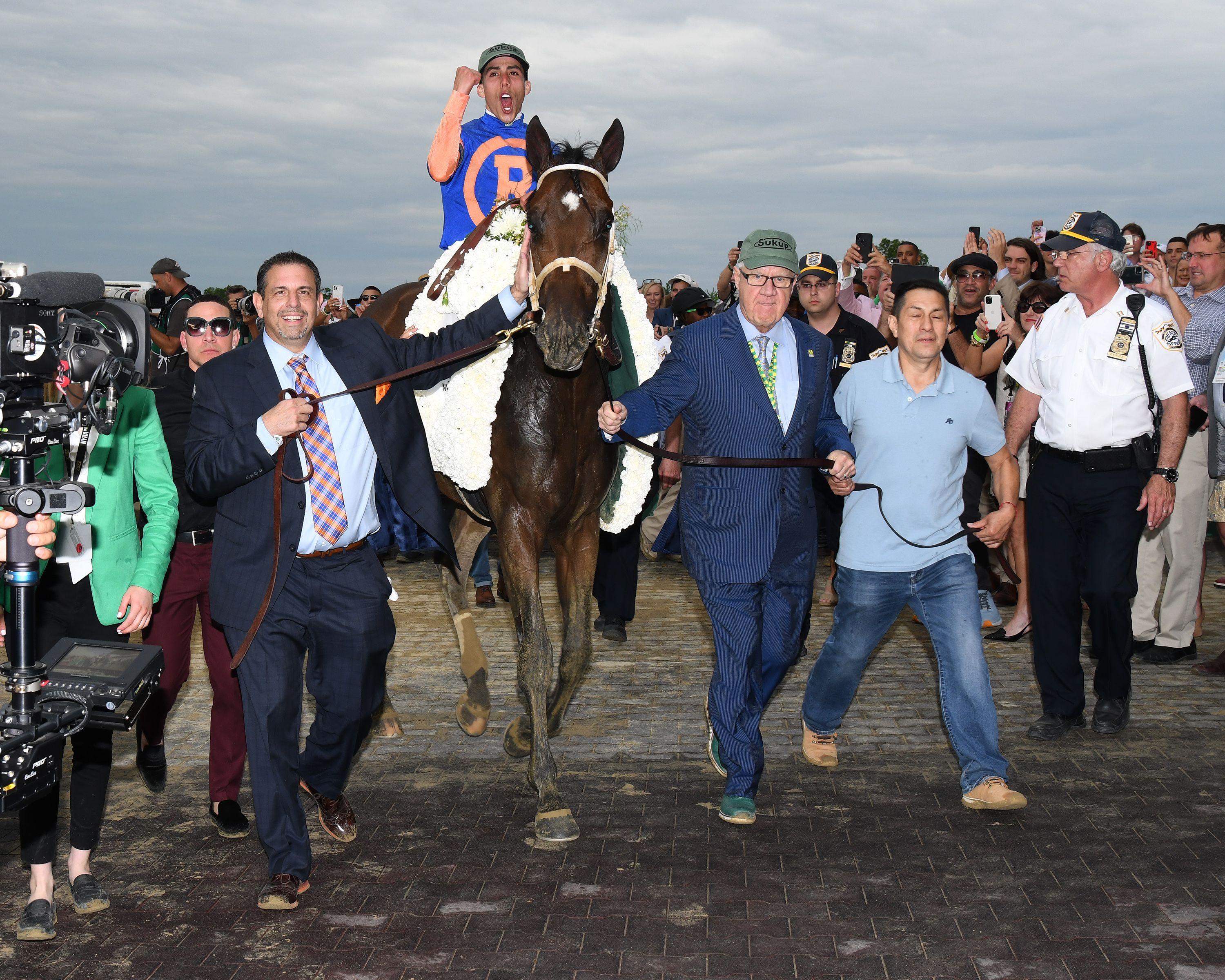 Winners Circle. Photo by A. Coglianese/NYRA.

Mo Donegal advanced past a game Skippylongstocking and a tiring We the People with three-sixteenths of a mile remaining to the finish wire. Mo Donegal took control from the middle of the track and won by three lengths in 2:28.28. Nest finished 3-1/4 lengths over Skippylongstocking with We the People, Creative Minister, Rich Strike, Barber Road, and Golden Glider finishing in that order.

Irad Ortiz, Jr. credited Mo Donegal’s win in the Belmont to a clear trip. He previously ran into trouble in the Derby and lost by only a few lengths. This was Ortiz, Jr.’s second Belmont win following his previous Belmont win with Creator for trainer Steve Asmussen in 2016. “I’m happy I won and I’m happy (my brother) Jose got second.” Jose Ortiz said that Nest’s stumbling out of the gate was the worst break for them that day. 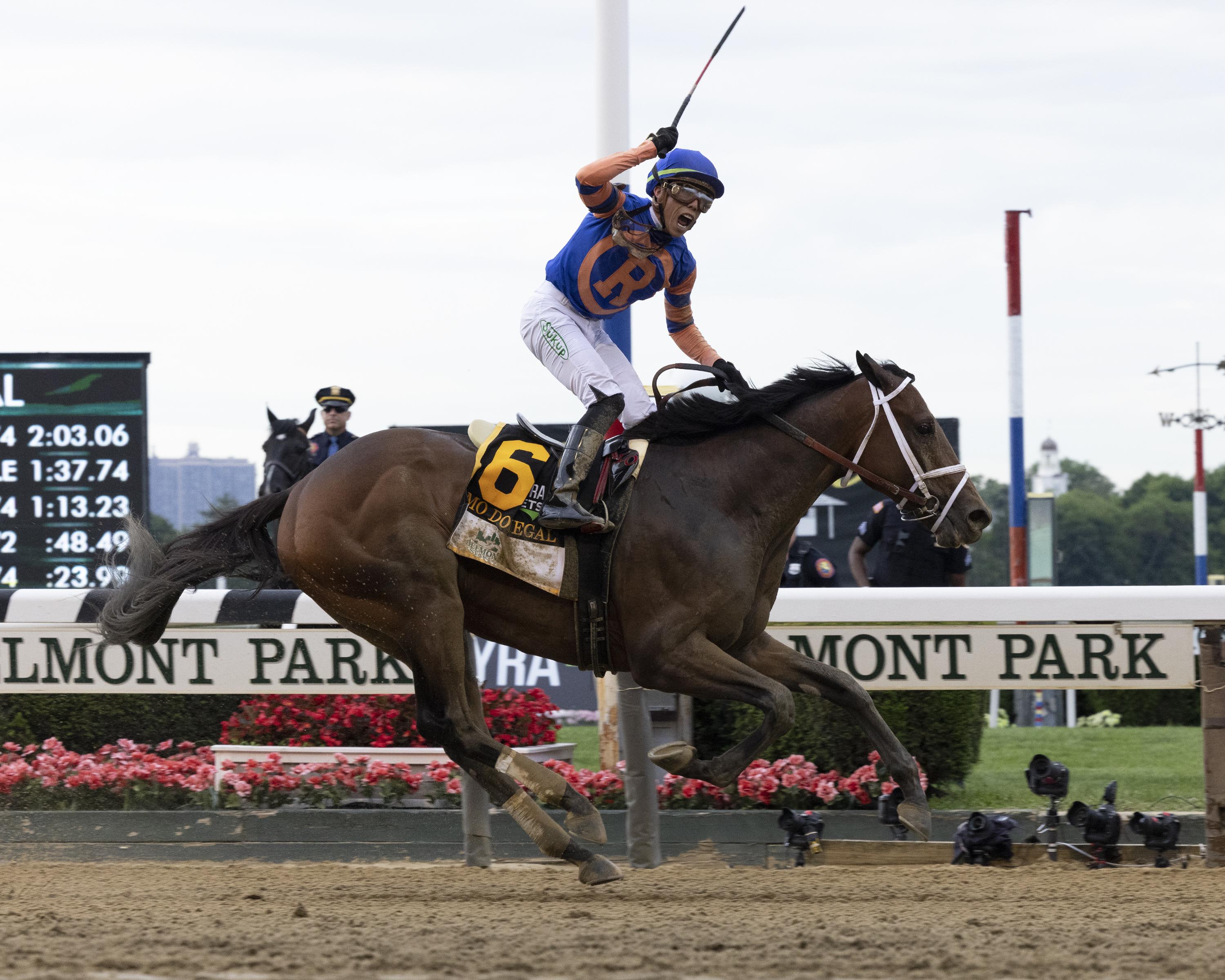 Rodolphe Brisset, trainer of the earlymorning-line favorite We the People [2-1], said the 1.5 mile distance may have been too long for his Grade 3 Peter Pan winner. Eric Reed, trainer of Rich Strike [7-2], stated that being so far back early in the race was an issue. Reed decided to keep Rich Strike off the inside rail and thereby allow his horse more room to run when he was able to make his move later into the race. Reed concluded that he made a tactical mistake because Rich Strike (on his own) was trying to get to the inside throughout the race.

Construction of the UBS Arena significantly reduced the size of the Belmont Park backyard. As a result, Belmont Park is currently operating at a fan capacity of 50,000. Paid attendance on Belmont Stakes Day was 46,301.

This was a unique Triple Crown year in that each of the 3 races was won by a different horse, while several horses competed in only one or two of the three races, rather than all three. However, several of the connections have shown interest in competing this summer at Saratoga in the 1-1/4 mile Grade 1 Travers Stakes. That race potentially could unite today’s most competitive racing Thoroughbreds for a super mid-summer extravaganza. 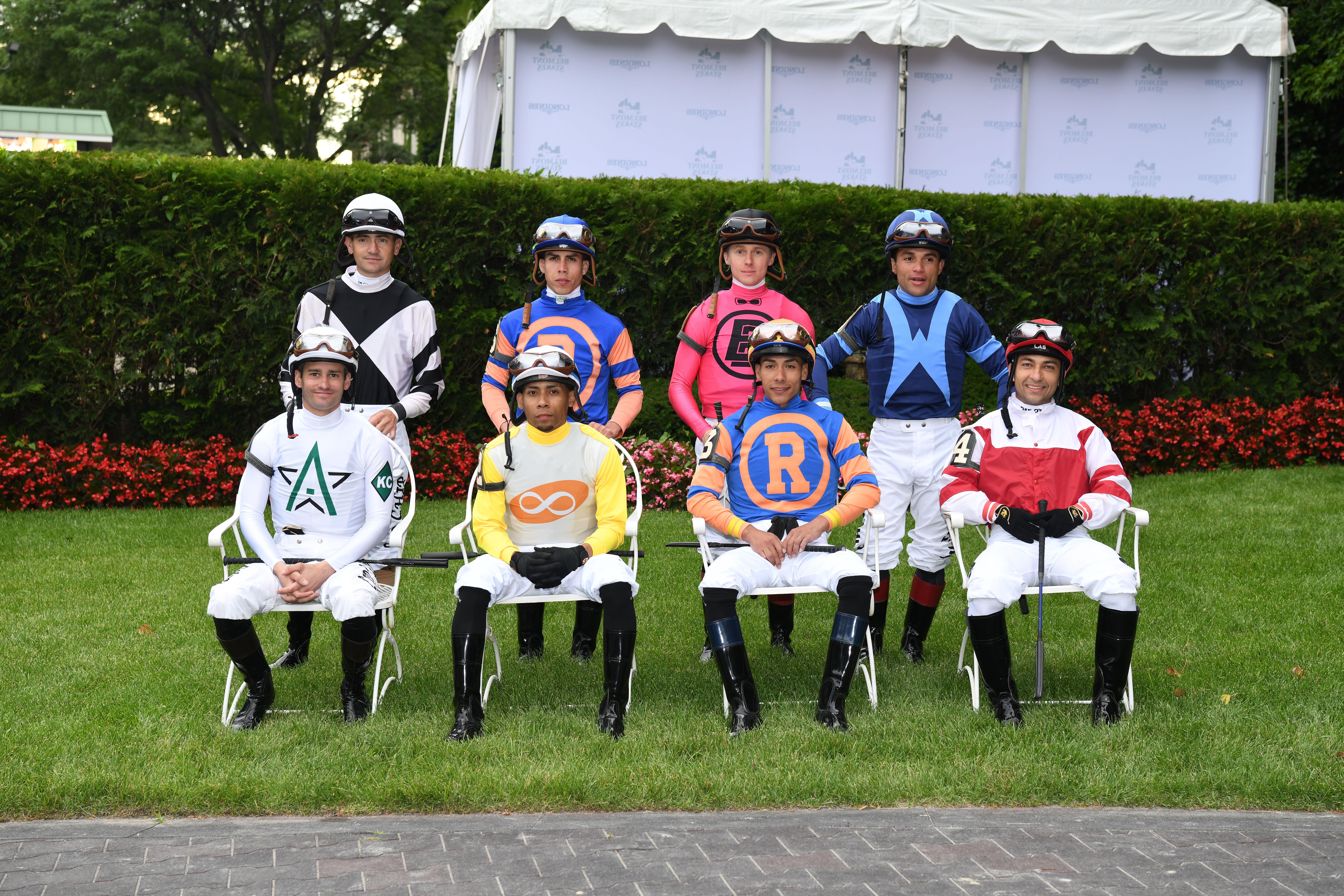 Dr. Gregory A. Beroza, DVM, DACVS, DABVP has been a practicing veterinarian for over more than 42 years, a participant in the equestrian world for over 50 years, and as a media host and consultant he produces ‘Talking Horses’® via his HorseDoc® network Contacts: [email protected].