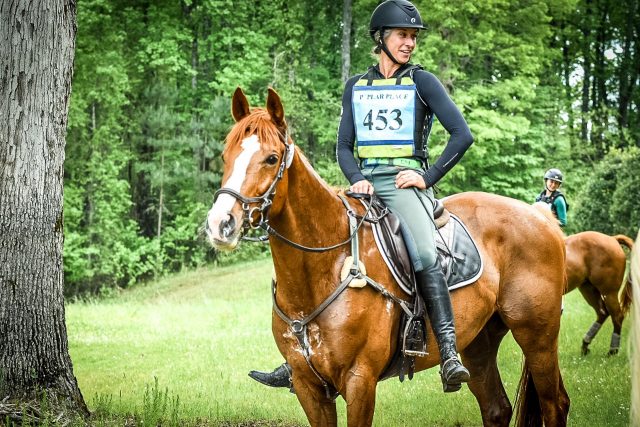 Many horse owners try to calm their horses’ nerves to make them more manageable through supplements and sedatives. However, for trainer Aubrey Graham, addressing a horse’s nerves is more about rider relaxation and equitation than chemicals.

Welcome to the next installment of Thoroughbred Logic. In this weekly series, Anthropologist and trainer Aubrey Graham, of Kivu Sport Horses, will offer insight and training experience when it comes to working with Thoroughbreds (although much will apply to all breeds). Come along for the ride as she discusses her logic on riding the nervous horse.

Recently, a few friends have asked the online community about the best supplement to keep a horse’s nerves in check. The resulting list of powders, pastes, and homemade brews guaranteed to nix equine anxiety would likely have even impressed a human pharmacist. I, however, enjoyed the tongue in cheek response, “Gummies and Zoloft.”

Calm the human, calm the horse.

Spoiler alert: I think the supplement question is an important one, but with little experience in that corner, I’m the wrong person to weigh in. This article and the following few weeks of writing, however, will take a stab at how to train with, through, or around equine nervousness. 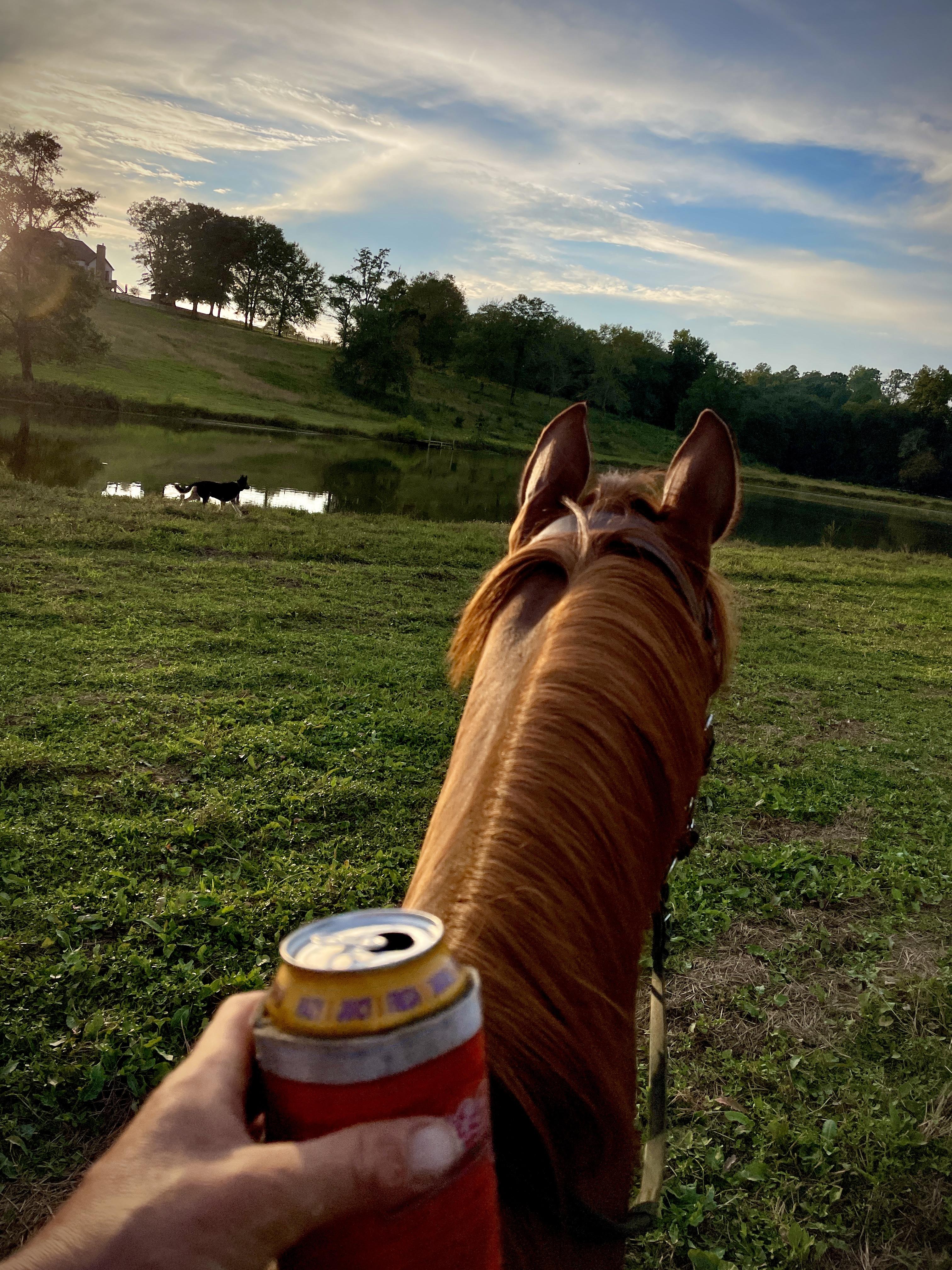 Crafty Charger and a well warranted brew. Did it keep him calmer on the hack? Unlikely. But at least I was relaxed. Photo by author.

When I participated in the Retired Racehorse Project’s Masterclass at their MegaMakeover in October 2021, three trainers were generously presented with horses from Second Stride and the Secretariat Center. Each of us was to draw a horse and provide an hour or so of training that demonstrates how we work with recently off-track Thoroughbreds.

You can watch the recap of the video here:

The options were a quiet, somewhat ewe-necked bay gelding, a spicy “ain’t having none of this BS” red mare, and a jigging, big bay Stakes horse. We were all in the Kentucky Horse Park’s covered arena. There was an audience, loudspeaker, jumbotron, banners, the other horses, and all new handlers. It was a situation that would make any green horse (and most seasoned ones) show their nerves. In a convenient cross-section, each of the three demonstrated their anxiety differently.

The pretty red mare entered the arena with a rider aboard in the morning. In unfortunate synchronicity, as soon as her representative mentioned that the mare was insecure but had never really acted on it, I watched her front feet come up well off the floor. She had reactive anxiety — where insecurity is channeled back into a space where she feels comfortable and in control. For her, that was a space called “no.”

The little ewe-necked fellow was largely non-reactive. He internalized his anxiety and simply clicked through what was asked of him with minimal flare. His quiet actions and “yes sir, yes ma’am” demeanor made him appear ammy-friendly. The flat attitude also made me aware that one would likely have a more playful, switched on, outwardly expressive horse in a few weeks with steady confidence and a clear routine.

“Something Awesome” was different. The big bay jigged in place, sweat, and literally chomped the bit as he took in the sights and sounds. His nerves allowed him to feed off the atmosphere, but not explode. He was smart and ‘up,’ but thinking through his anxiety. 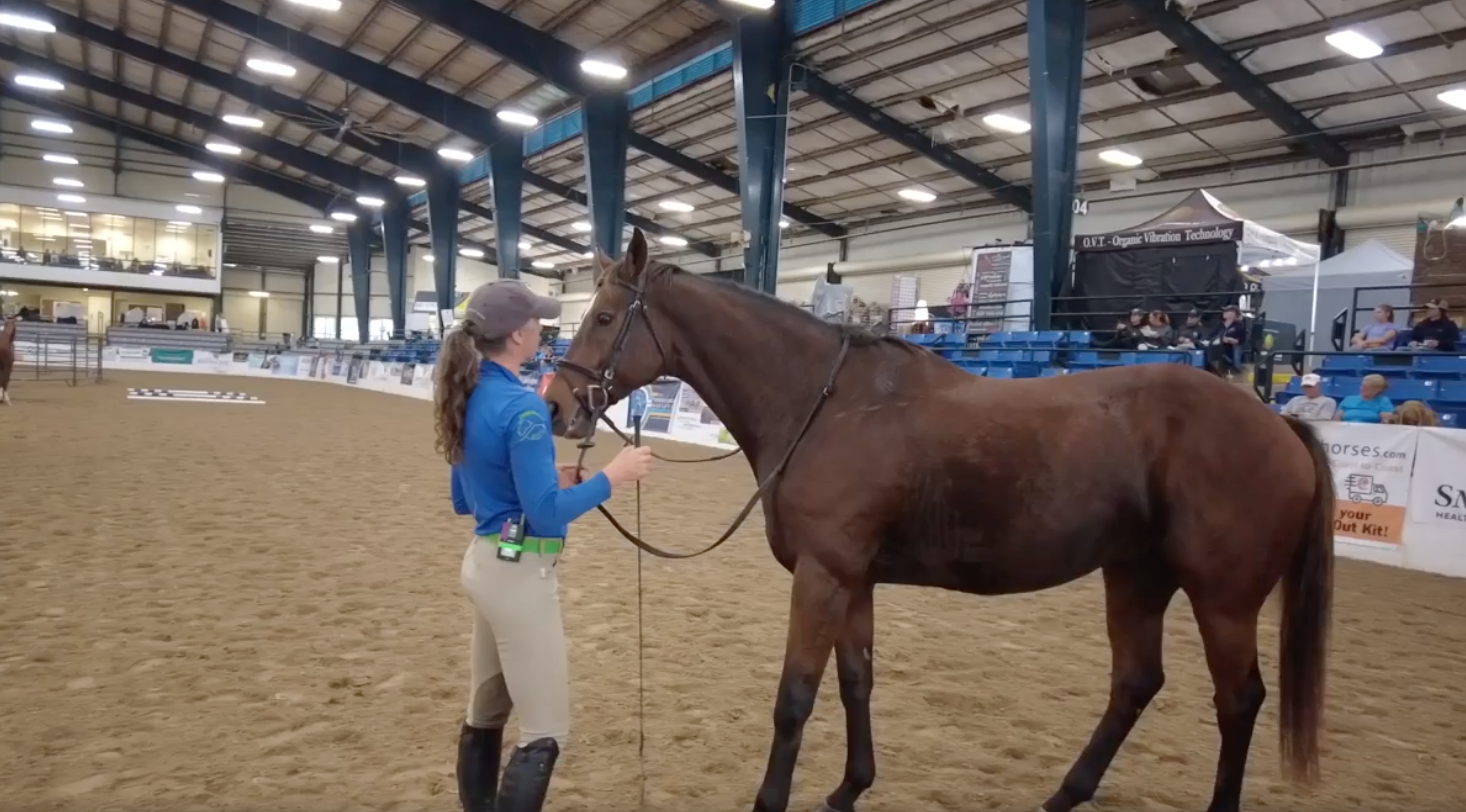 Beginning to work with a nervous Something Awesome at the Retired Racehorse Project’s MegaMakeover Master Class in 2021. Screengrab from https://www.facebook.com/watch/?v=480859499797863.

By literal luck of the draw, I was assigned the horse I would have been most likely to have picked out of the lineup – the Stakes horse. This is the type of horse I love working with – he had clear talent, and it was evident that one just needed to find a productive direction for his energy. Over the course of the next hour and half, he transformed from the jigging racehorse to a stand-on-a-loose-rein, walk-trot-canter riding partner. 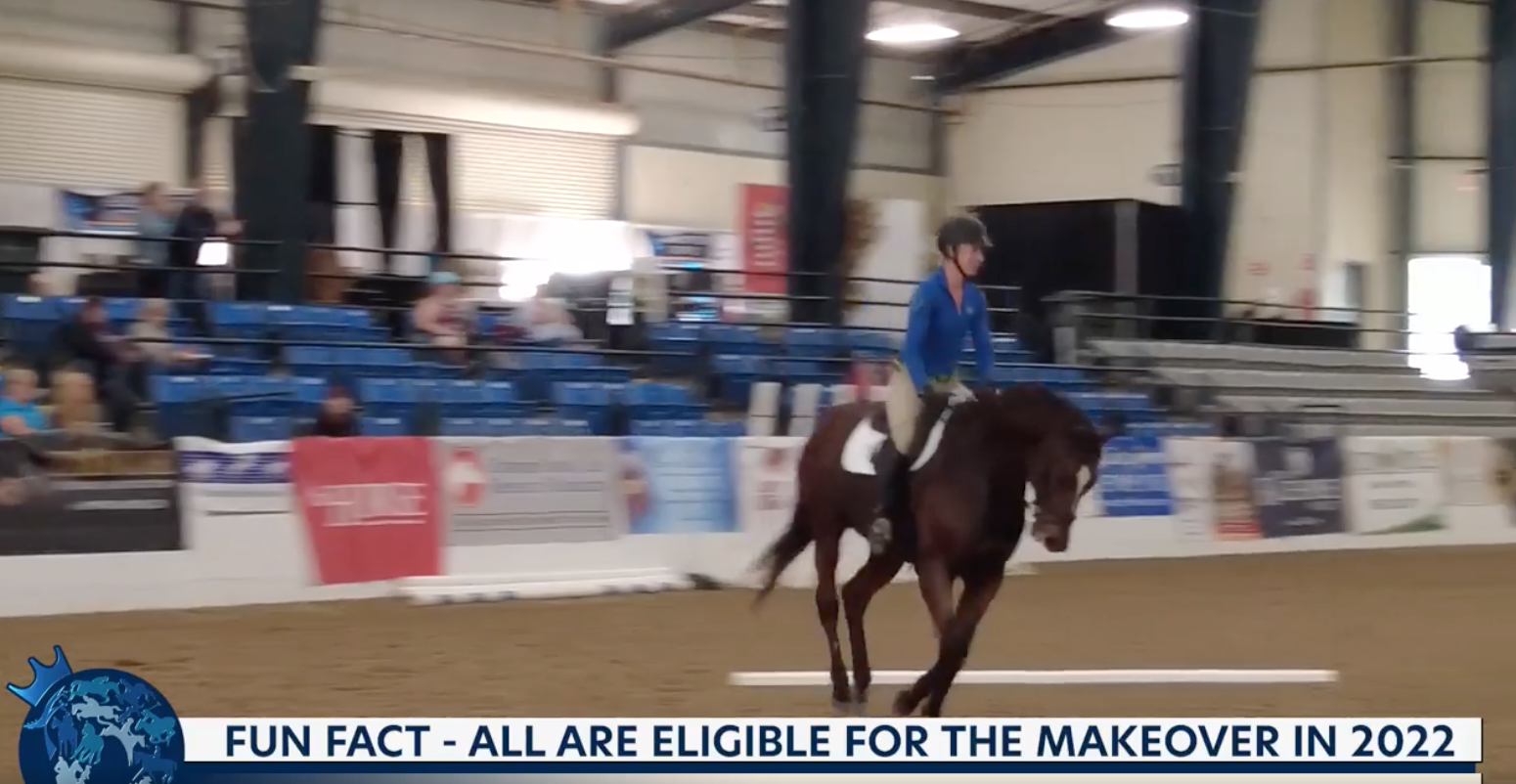 Something Awesome cantering quietly during the RRP Masterclass. Screengrab from https://www.facebook.com/watch/?v=480859499797863

The other two trainers equally achieved respective success with their horses. Though we all applied different techniques and came from different disciplines, each horse’s transformation relied on a few common anxiety-nixing “tricks”: 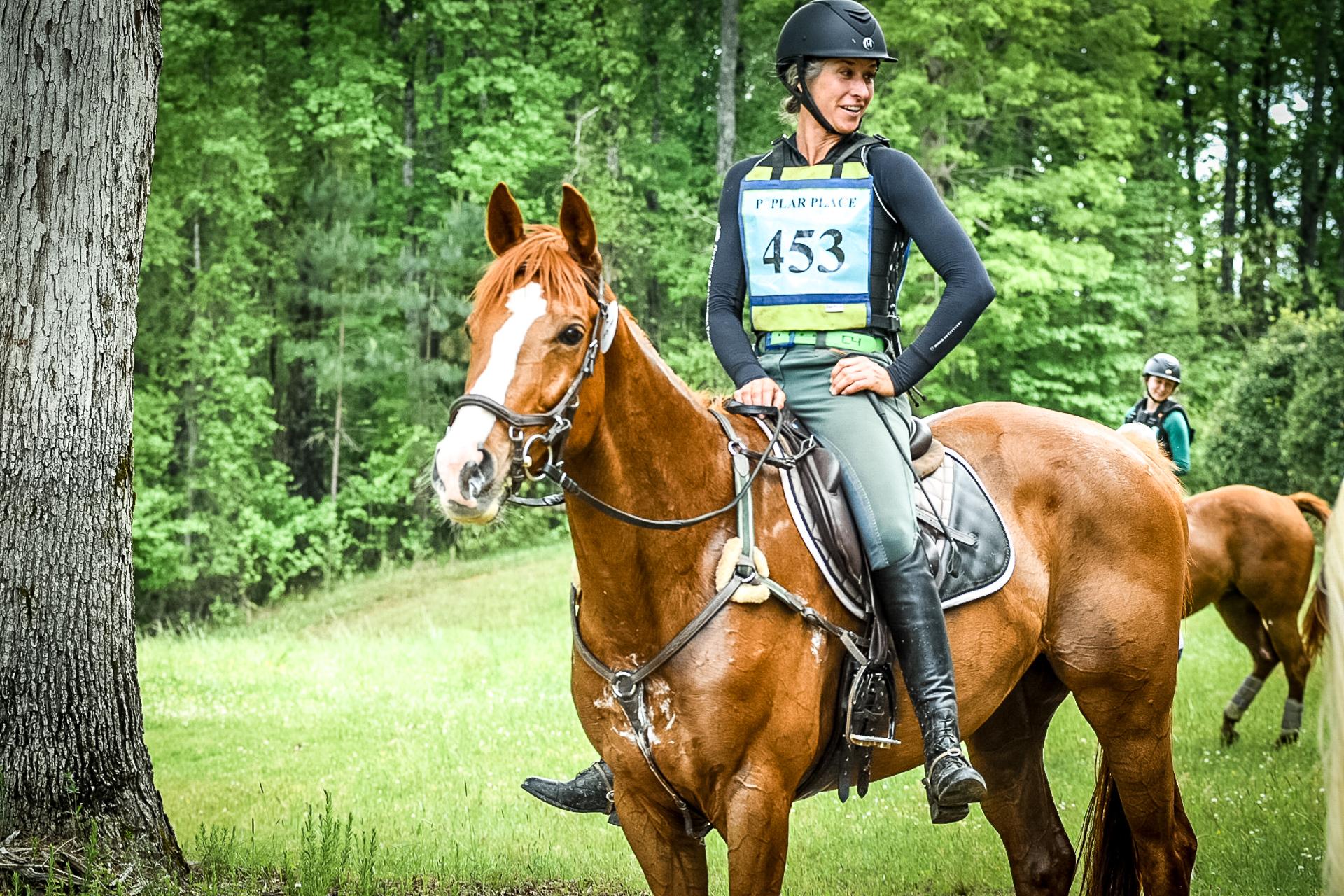 This is probably a good place for a couple of important disclaimers:

On one hand, while extremely useful, this combination of training-to-calm still might not nix the severe, chronic equine anxiety for which folks are trying to find supplement-based solutions. That said, it is not a bad place to start. Moreover, the calming trifecta won’t work worth a damn if anxiety comes from pain (so from ulcers to body soreness, to hocks, to bruised feet, if that’s something you even kinda-sort-think needs to be investigated, it is always best to get a vet on board).

So this week, a few comments on human calmness – no it is not all Zoloft, gummies, or wine (but hell, if it helps, you do you). 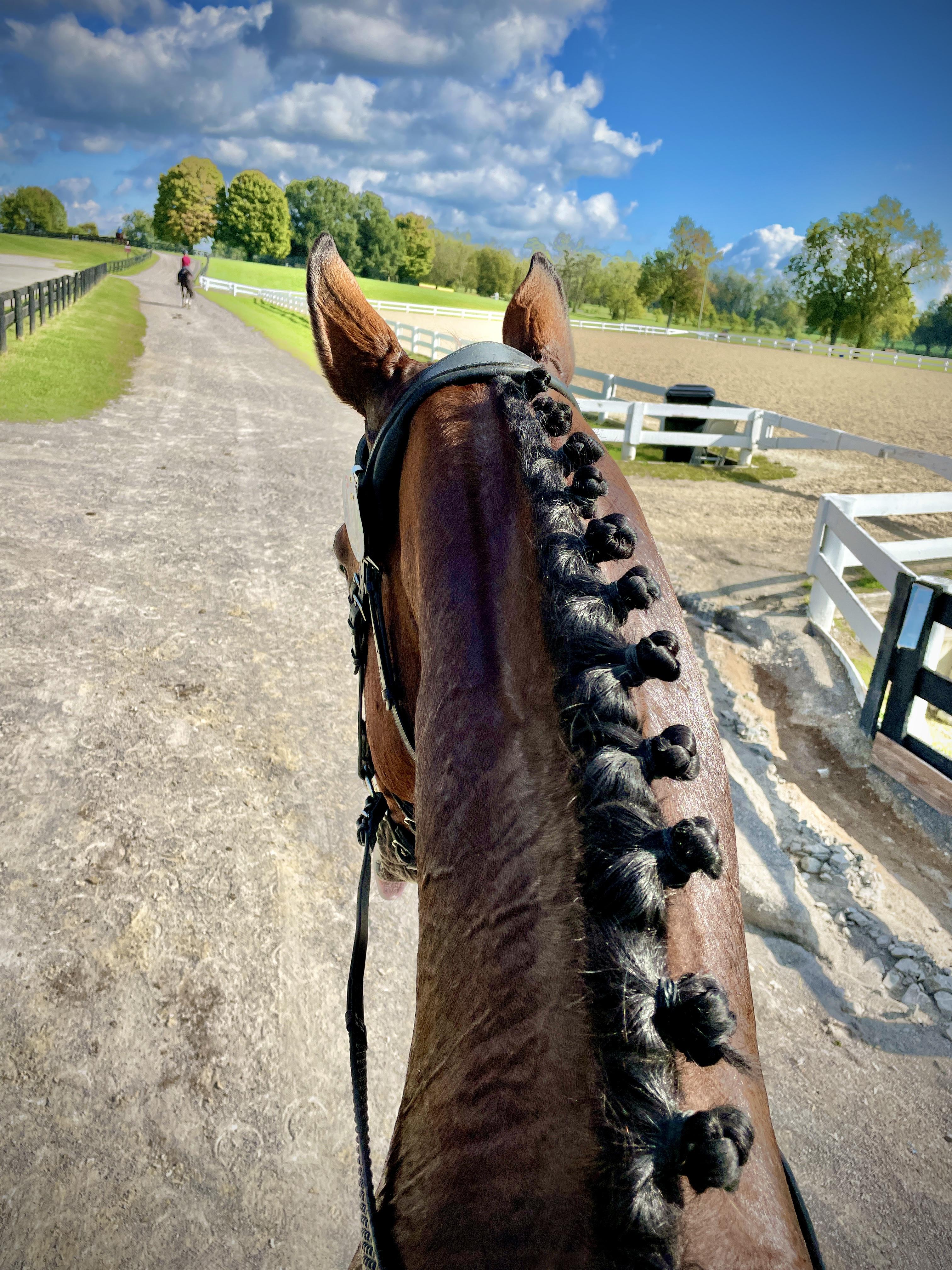 Boomer (Vanderboom Ridge), comically letting his anxiety out while jigging back to the stalls after a lovely, calm performance at the Retired Racehorse Project’s Makeover in 2021. Photo by author.

A while back, I sat on Boomer (JC Vanderboom Ridge) (who found dressage super stressful) and had the realization that the comment, “for f&*k sake, RELAX!” has never in the history of riding made a horse take a deep breath and settle in. That said, I also can’t remember any time I have responded positively to anyone who yelled at me to calm the F down.

Anthropomorphizing isn’t always helpful, but it might be here. Getting frustrated does not produce a calmer partner. Getting calm, on the other hand, helps to reproduce itself. 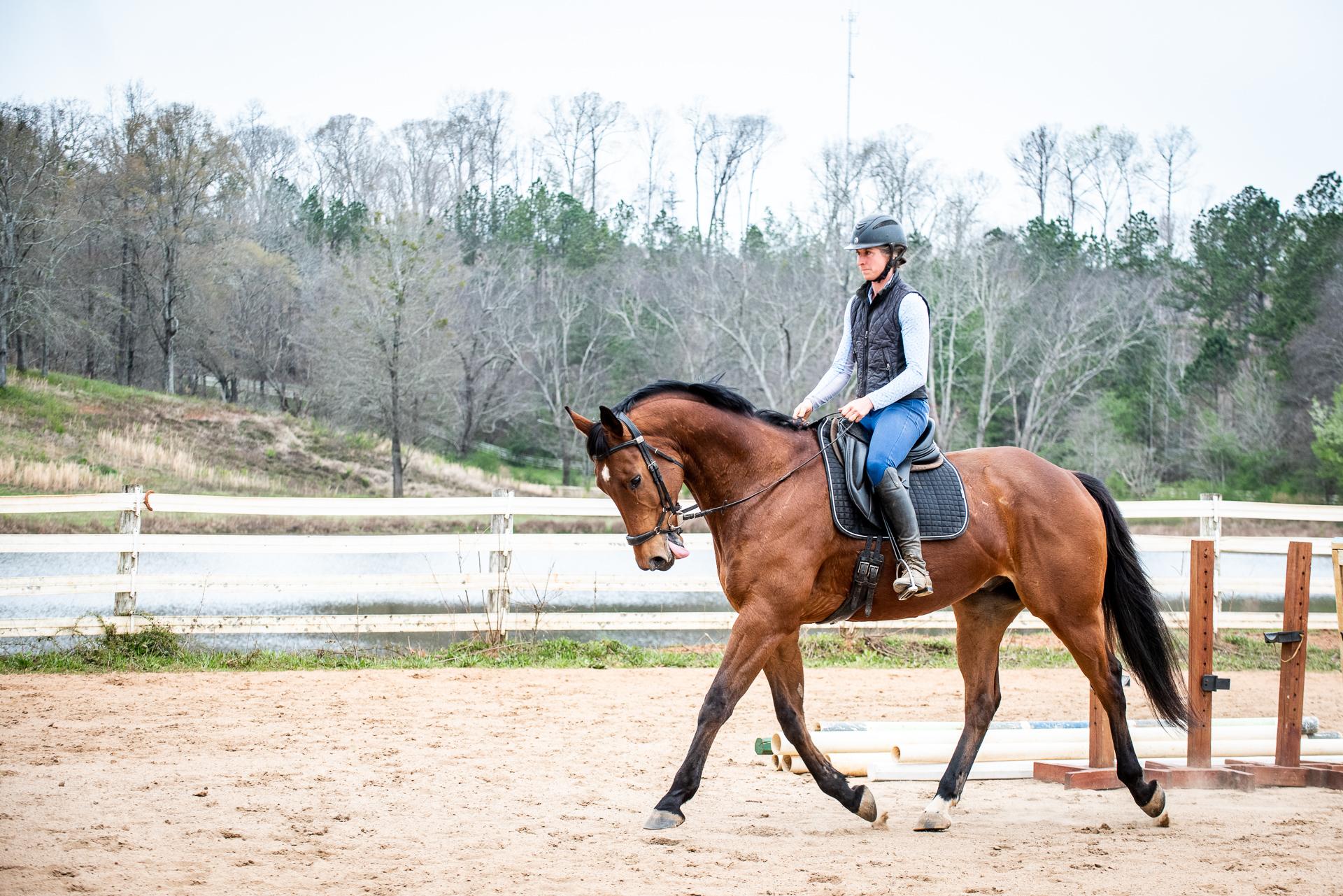 Boomer being super good at home, but still showing off his anxious tongue. Photo by Ashley Clarkin

When Boomer would get stressed, he would take tight steps, lift his head, and exaggerate his tongue wagging (his tongue was out sometimes when he was happy too… in part, that’s just him). As I schooled him up to compete in Dressage at the MegaMakeover, it was painfully apparent that any level of frustration on my end was one hundred percent counterproductive for him.

So, one day I made my approach more radical, instead of aiming to be patient and just ride calmly, I tried to ride how I wanted him to respond. I made my joints as soft and bungee as I could. I lightened my seat, and tried to let my jaw open and clink. I also consciously pulled my tongue off the roof of my mouth (it’s weird but getting it down actually can make a difference in tension). His ride got better – softer – calmer. 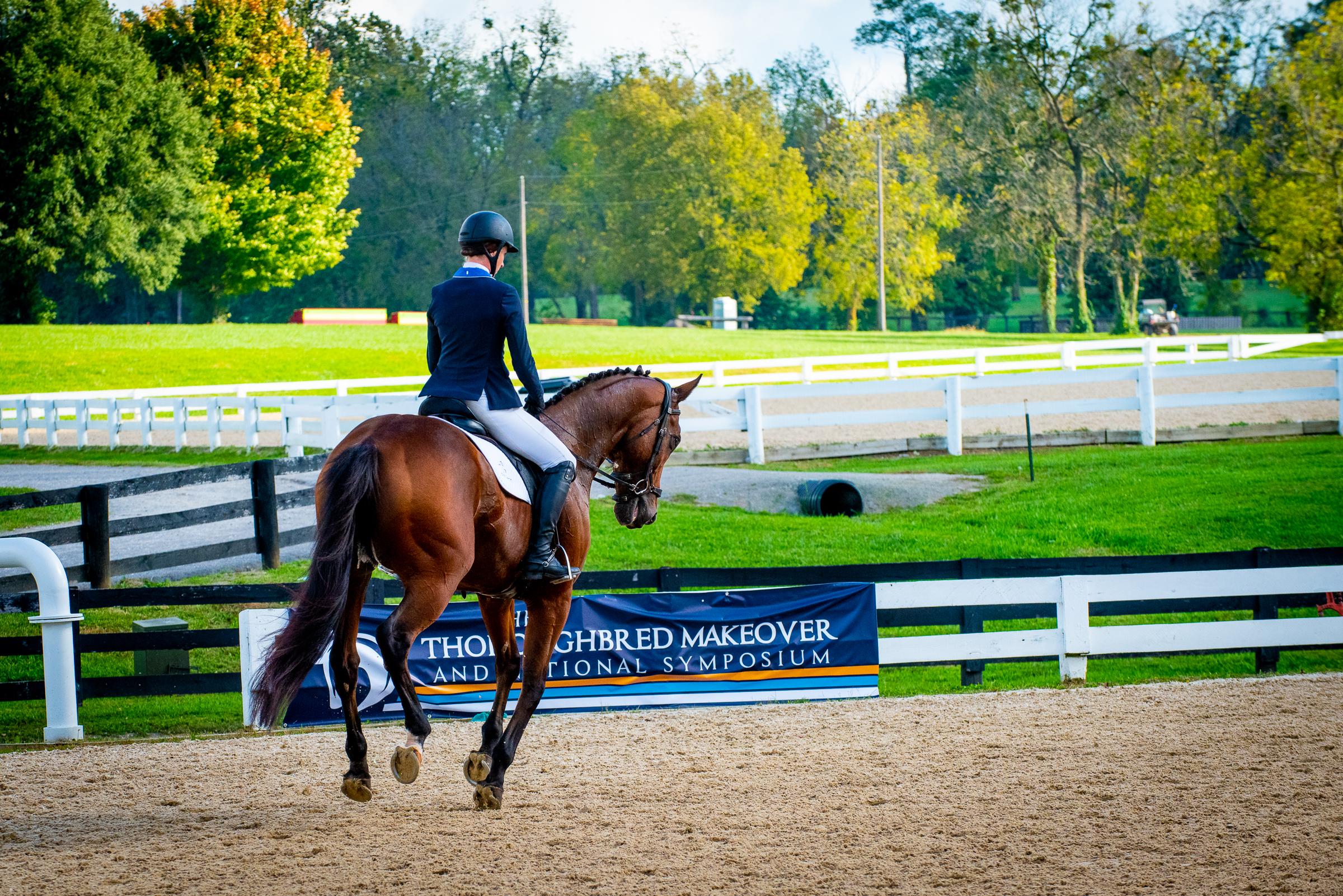 Boomer rocking it at the Makeover. Good, giant kid. Photo by Alexa Wegner.

At the Makevoer, trotting down the centerline, I had more than just my test to remember. I checked my energy, made myself more elastic, and tried to become what I wanted him to be: soft, supple, confident. Put that way, it might sound ridiculously hippy-dippy. Put another, it is using your good equitation to ride a horse through their nerves. When they ball up under you – ignore them, stay calm and go back to what you know – eyes up, hands soft, leg on.

Whether one approaches a nervous horse through my kinda “woo-hoo” way, or by relying on simple good eq, the results are similar. In general, an anxious horse will ride through their nerves and settle to meet your confident energy or your quality riding. It might be easier said than done, and it might take a whole bunch of time and effort, but it works for so many of them. 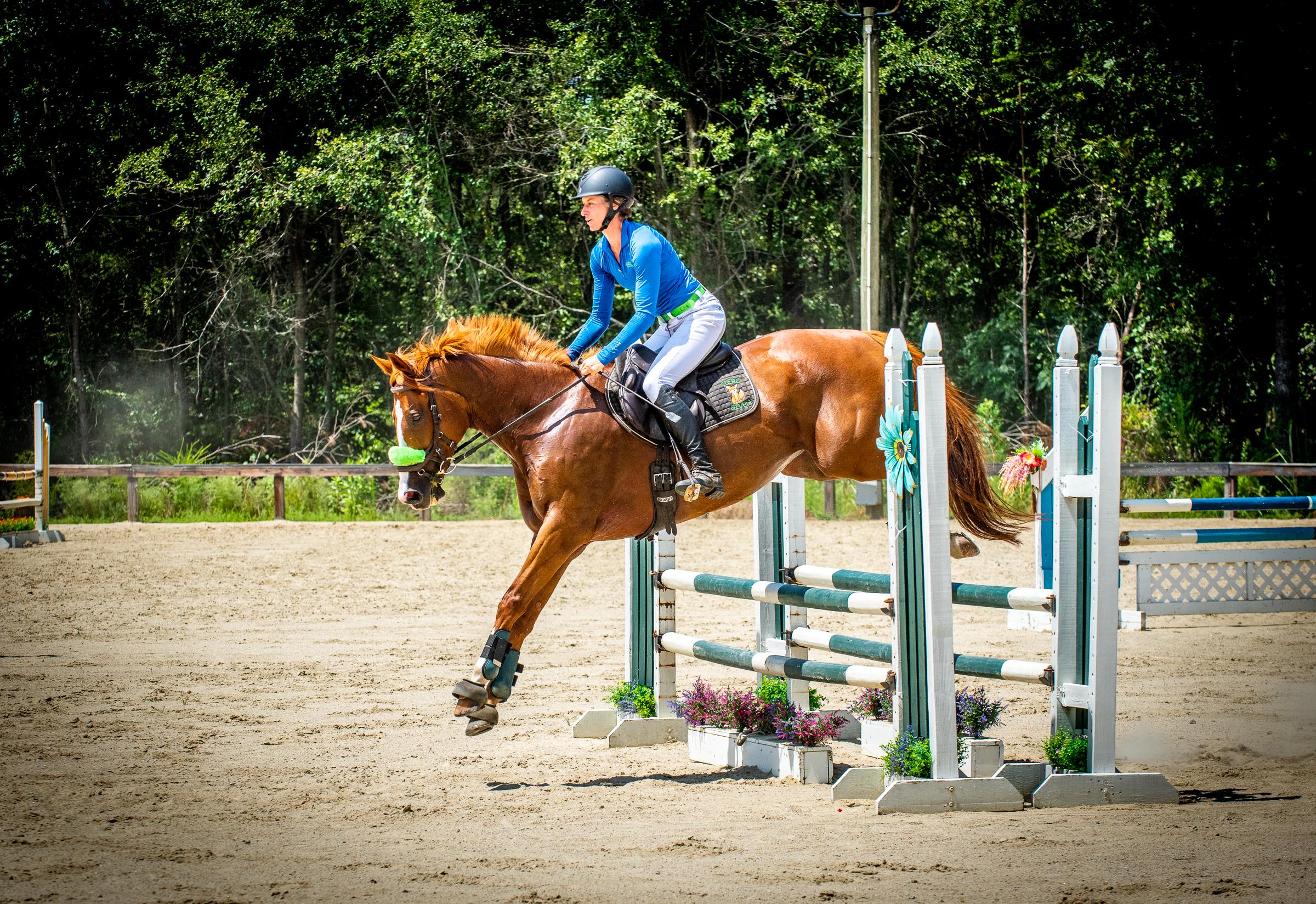 Crafty rocking around the Big Cheese Eventing Jumper show back in August, 2021. Photo by Alexa Wegner.

Boomer makes a super example, but I can’t close out this article without bringing Crafty quickly into the fray. Crafty Charger came to my farm as a nervous wreck — to the degree that his then-trainer used the term “dangerous” to describe him. With a few months of steady work and focus on quieting my energy, laughing at his antics, and trying to ride with damn good equitation (and extremely soft hands), things turned around and he started going well.

In fact, he went better than well. He became the horse that made me a better rider every single time I got on. His anxiety made me quieter. In response, he got quieter. And in his version of quiet (which is still very far from a kick ride), his athleticism and ‘try’ shone through. And for all of that, he got to join my personal string of goofy, talented Thoroughbreds. Good Crafty, you’ve got a hell of a bright future, kid.

I could go on and on here… but check back next week as we’ll tackle part two of riding the nervous horse by addressing the notion of boundaries and clear communication. Till then, stay calm and kick on.