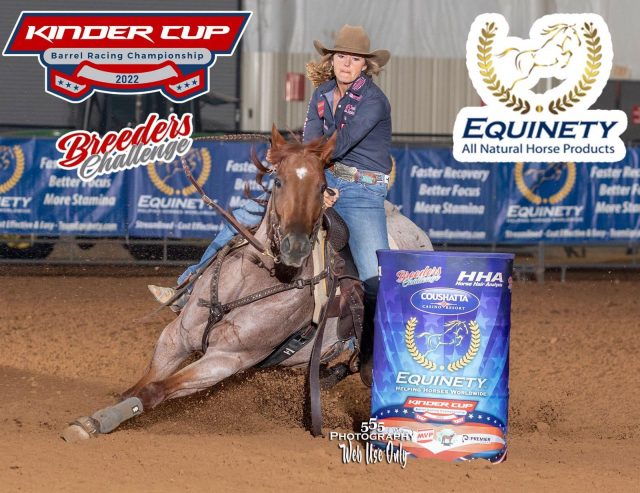 The 2022 Kinder Cup Barrel Racing Championship took place from February 9th–  12th at the Grand Coushatta Casino Resort in Kinder, Louisiana. The event featured a 2D Futurity, 2D Derby and 4D Open as well as an Amateur Futurity, Amateur Derby, Slot Race, Adult Sidepot, Youth Sidepot and No Penalty Sidepot. In 2021, the event had to be canceled due to the pandemic, but competitors showed up in a big way this year. With over 800 entries in the Open, it was the biggest barrel race ever hosted by the facility. In total, the 2022 Kinder Cup paid out over $300,000 in prize money in just two days of competition.

To kick off the event on Friday, Kortney Kizer and her horse Coronaslucky Twonite won the First Go of the 2D Futurity and The Breeders Challenge Futurity with a 14.660-second run. They ended up also winning the Futurity Slot Race and banked over $24,000 in one run! Coronaslucky Twonite is an Oklahoma-bred mare by JL Dash Ta Heaven and out of Corona Four Fiesta, by Corona Cartel. Kortney says that Coronaslucky Twonite has a strong personality that helps carry her to the winner’s circle.

Brittany Pozzi Tonozzi and her horse Rock On Guys, aka “Lefty,” made over $8,000 in one run when they ran a 14.638 to win the 2D Derby, The Breeders Challenge Derby and the 4D Open on Friday. Brittany bred and raised Lefty, who is by A Guy With Proof and out of Vital Rock, by Firewaterontherocks. Brittany, who undoubtably has a busy schedule as a breeder, owner, trainer, rider and mother, said that she is very proud of Lefty’s success!

James Barnes and VF Quick Release won the Second Go of the 2D Futurity on Saturday with a 14.662-second run. They won over $4,000 in one run. VF Quick Release is an Oklahoma-bred gelding by Eddie Stinson and out of Wheely Quick, by The Harder They Fall. VF Quick Release owned by Cameron Tankersley. James says that he is thankful for the opportunity to run such a talented gelding.

Dustin Angelle and VF Born Famous won over $2,000 for their win in the Open 4D on Saturday with a 14.541-second run, which was the fastest time of the entire weekend. VF Born Famous is an Oklahoma-bred gelding by Born Ta Be Famous and out of Sleek Glass, by Image of Greatness. Dustin and VF Born Famous also ran the third fastest time in the 4D Open on Friday. Over the past two years, this team has posted many fast times at the country’s largest barrel races!

Ashley Schafer and her horse Born On Derby Day were extremely consistent in their two runs. They won the 2D Futurity Average with an aggregate time 29.397 seconds. They were also second in the Slot Race and second in The Breeders Challenge Futurity. Their earnings for the weekend totaled over $37,000! Born On Derby Day is a Wyoming-bred mare by Freckles Ta Fame and out of KR Last Fling, by A Streak of Fling. Born On Derby Day was bred by Joe and Carla Spitz and she was indeed born on the day of the 2017 Kentucky Derby. Ashley says that all of the horses that she rode at the Kinder Cup tried very hard and made her proud!