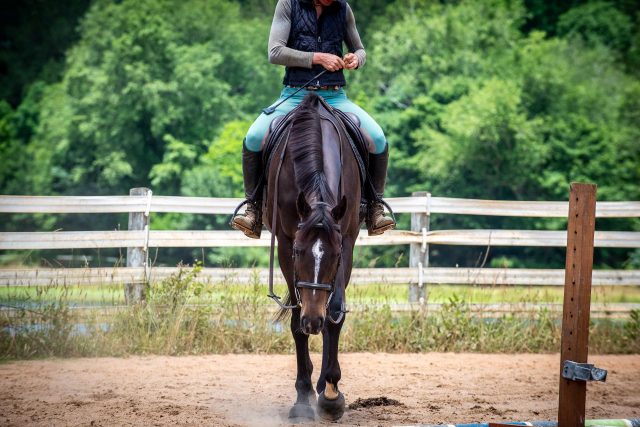 “And while I go trotting or cantering along, I might be hoping for a walk, but I’m not pulling for it. Instead, I work to get their brains engaged, craft a steady rhythm and semblance of straightness, and then aim towards a functional bend and good hind end engagement.”

Welcome to the next installment of Thoroughbred Logic. In this weekly series, Anthropologist and trainer Aubrey Graham, of Kivu Sport Horses, will offer insight and training experience when it comes to working with Thoroughbreds (although much will apply to all breeds). Come along for the ride as she discusses her logic on earning the walk with her horses.

Warmup arenas are often rightly likened to various circles of hell. That said, I might be the weirdo who kind of likes them. Part of the enjoyment is the test of the horse’s focus and the rider’s ability to multitask when dodging flying ponies, side-passing Warmbloods, and all the other two- and four-legged creatures just trying to make it to their competition ring sane and sound. 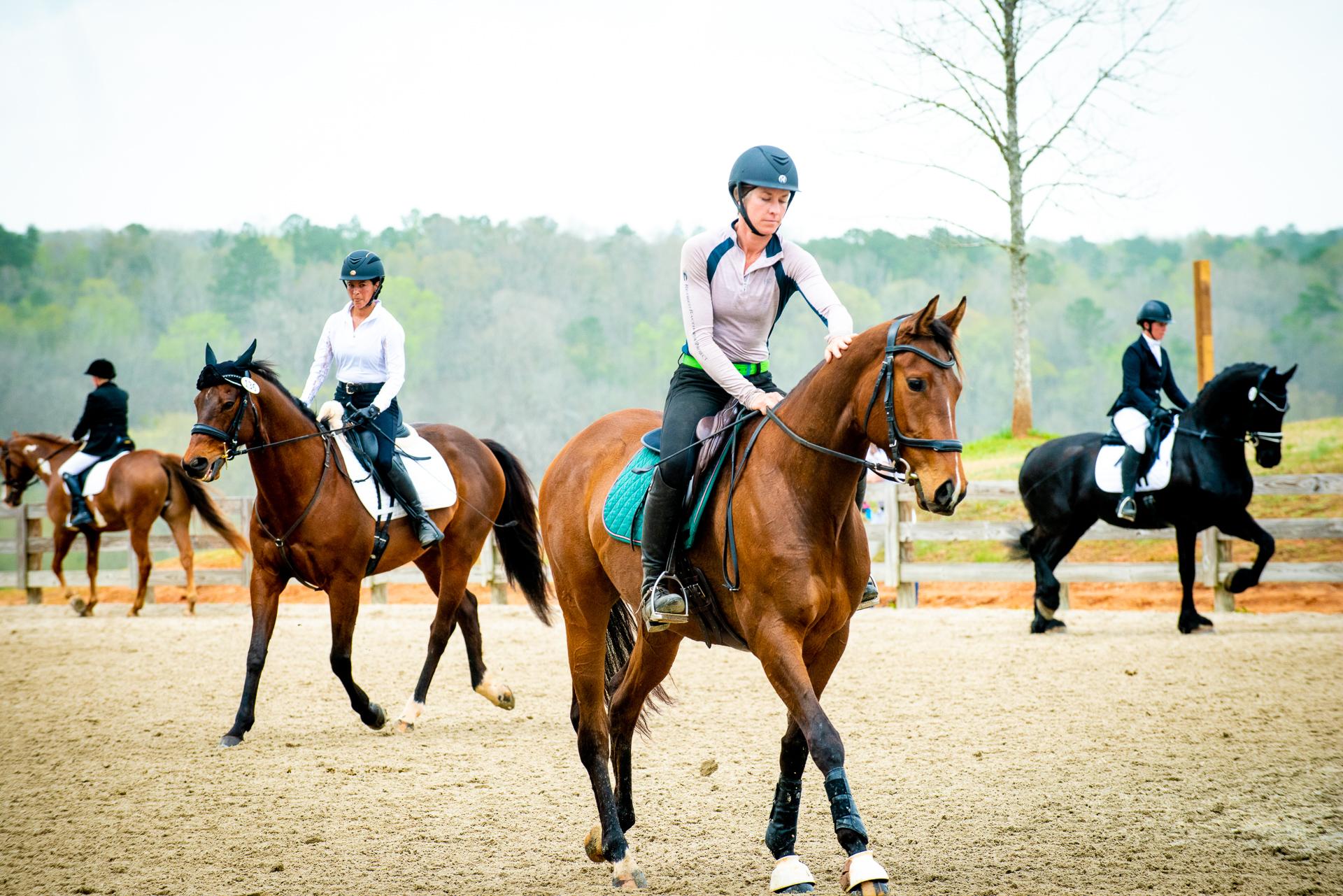 I also like the warmup ring for the trainer commentary. Even at its worst, the commentary can be entertaining. At best, who knows, you might gain something. Once a trainer shouted her student down for not counting the strides in each quarter of her 20-meter circle. Yelling aside, I hadn’t thought about it that way – nifty. At another show, a rider worked the walk a bit lazily, and her coach kindly reminded her to focus on the gait at hand, as in the walk one can improve many things (for instance, bend, suppleness, contact, engagement or straightness).

Today, we’re not concerned with the trainer screeching about 20-meter circles. Today, we walk. Or… sometimes… maybe we don’t.

The walk is cool. It’s the one gait that is possible when rehabbing a horse, when they’re not 100%, and it’s the way we start the warm up and end the cool down. It also sits in between the other gaits as both a “break” and as a sizably difficult thing unto itself. As such, it is the “reward” and the “steady”… yep, the walk is cool, but a good walk is also hard. 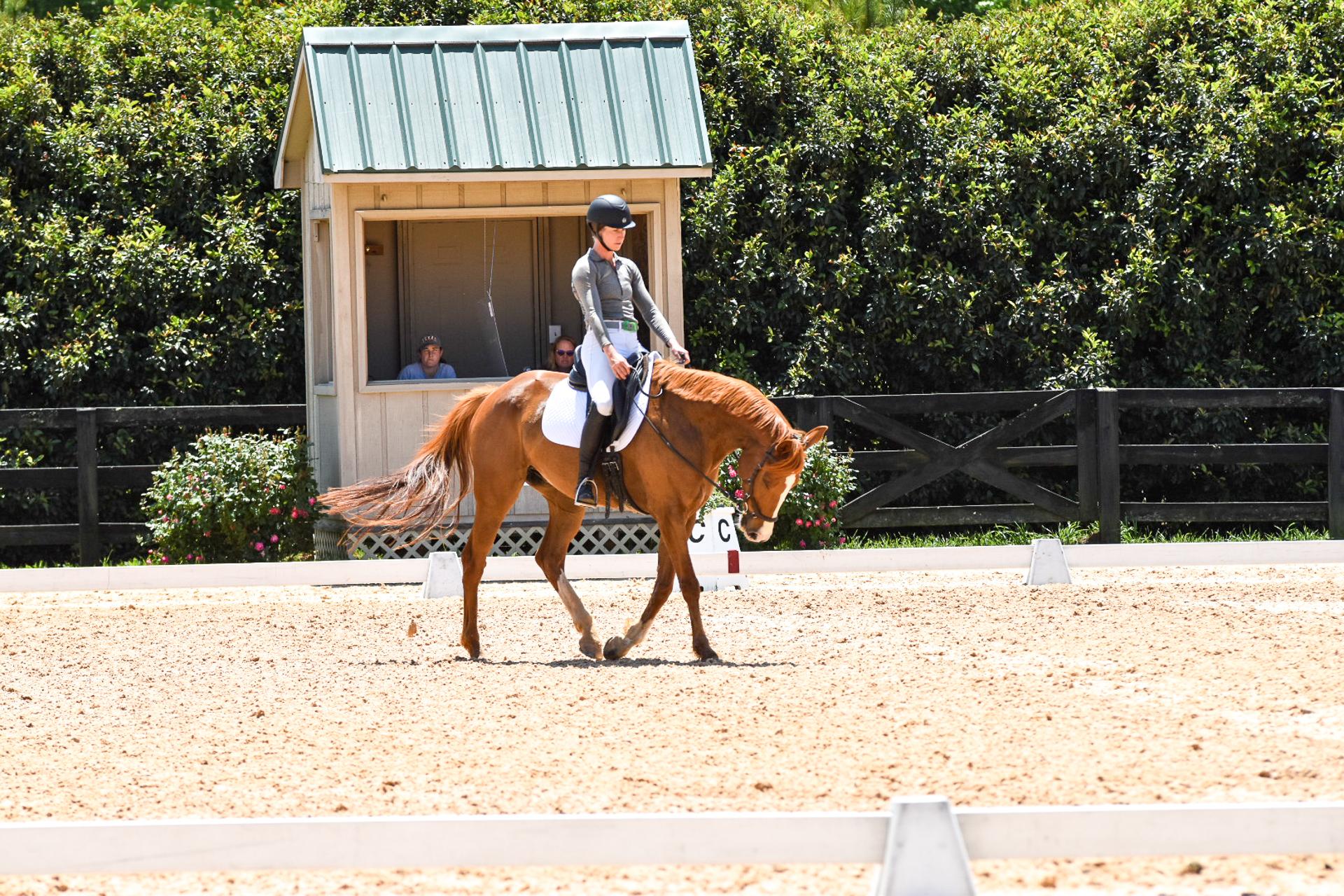 Crafty and I trying really really hard to get a decent stretchy walk at Poplar. Photo by Kelly Robison.

I came to dressage late(r) in my riding career, though I wish I had found it when I was a kid. Somehow, somewhere early along the way, I ended up taking the walk for granted. Because apparently back in the 80s and early 90s, for my horsey-friends and myself, the good stuff was only found at the trot and canter… or sometimes at the gallop (and it definitely existed while dodging the semi-frozen mud-clumps from the Thoroughbreds who took the lead when “racing” on the dirt roads).

Now, with dressage and many added years of horsemanship, the walk is no longer an afterthought. It is a goal.

Working with many off-track Thoroughbreds has undeniably heightened my appreciation for the gait. The walk isn’t always just “there” – rather, for some, every step of the walk must be earned. And that can require tact, patience, laughter and quality riding. It also sometimes requires giving up (at least temporarily).

Moving off from the mounting block, the horse *should* be at a walk. Ideally, I like to saunter off on a loose rein working slowly into contact over the initial portion of the ride. Some of my off-trackers walk great from the get-go. They mosey along relaxed and are willing to come up into your hand when asked. Mountain is one such horse – but hell, he’s also the horse that let me fix a fence from his back on his first off-track ride. His brain is that good. 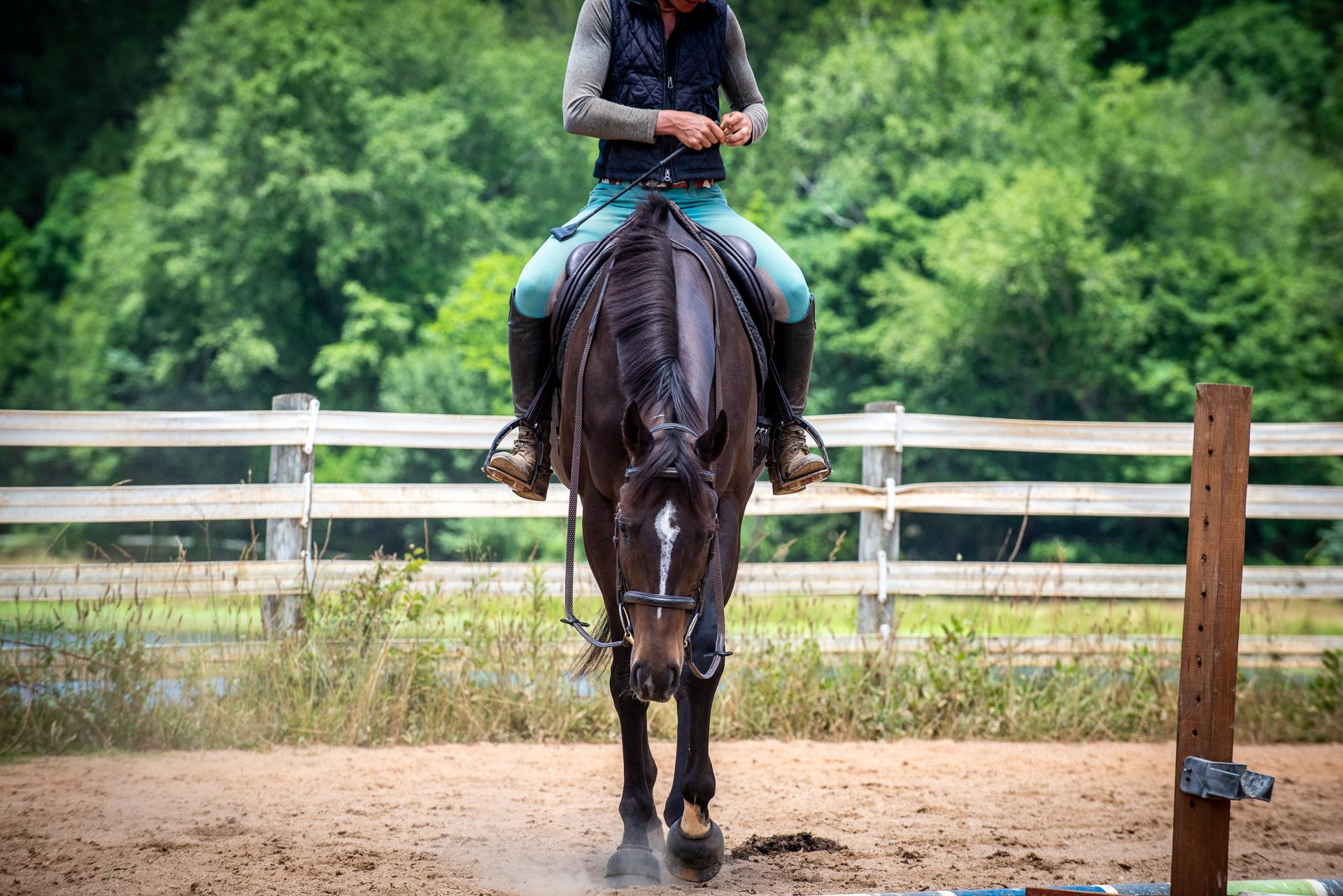 One of Mountain’s early post-track rides. Photo by Audrey Mecklenburg.

And then there are the spicy kids – the ones in my barn where the walk might not be initially guaranteed. But – it can be earned. And here’s the important part: Sometimes, to get the walk, you have to bypass it, forget about it, move on and earn it.  And that is totally okay.

Picking on Cheese Whiz (JC RW’s Retirement) slightly, but only because I adore him and think he has all the talent, here’s how last Friday went: It was 38 degrees and raining. After two days of precipitation, my arena was a swamp. With no indoor in sight, when it rains and horses need to be worked, we ride the (dirt) roads and simply get wet.

There is benefit in road riding — which should be its own article (and maybe it will be) — but for now, suffice to say that out-of-arena work is good for their body and their brains. My road is a 1/3 mile uphill to a closed five-bar farm gate, where we practice turning through lateral movements and head back down towards the barn. Rinse, repeat. 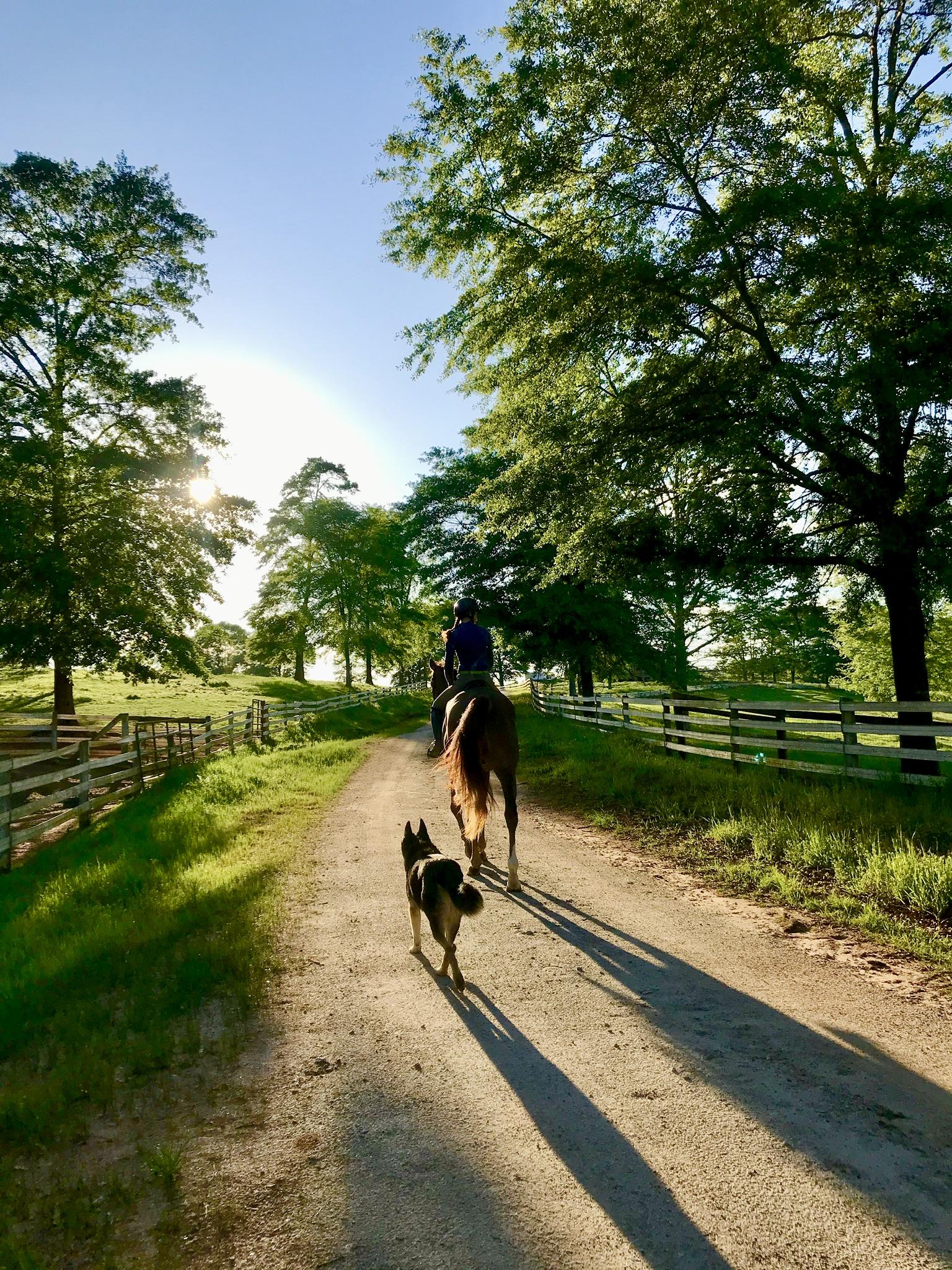 After a minute of negotiating the mounting block, I hopped on Cheese, and as I got my right foot in the stirrup, we were off. There was no walk. My barn is effectively a fancy but repurposed warehouse with a dirt floor, so I mounted inside and trotted straight out into the rain.

Does this mounting silliness need training? Absolutely (see last week’s article). But was I going to fix it all right then and there in the freezing rain? Nope. And I wasn’t going to force that walk either.

See, sometimes it is far better to give up on the walk than to demand it. Forcing the walk commonly produces sideways movement, unhinged hind-ends, rushing forward, and at worst, popping up or bucking. Especially with off-trackers, letting a horse go forward is key – the walk will be there when they are ready. 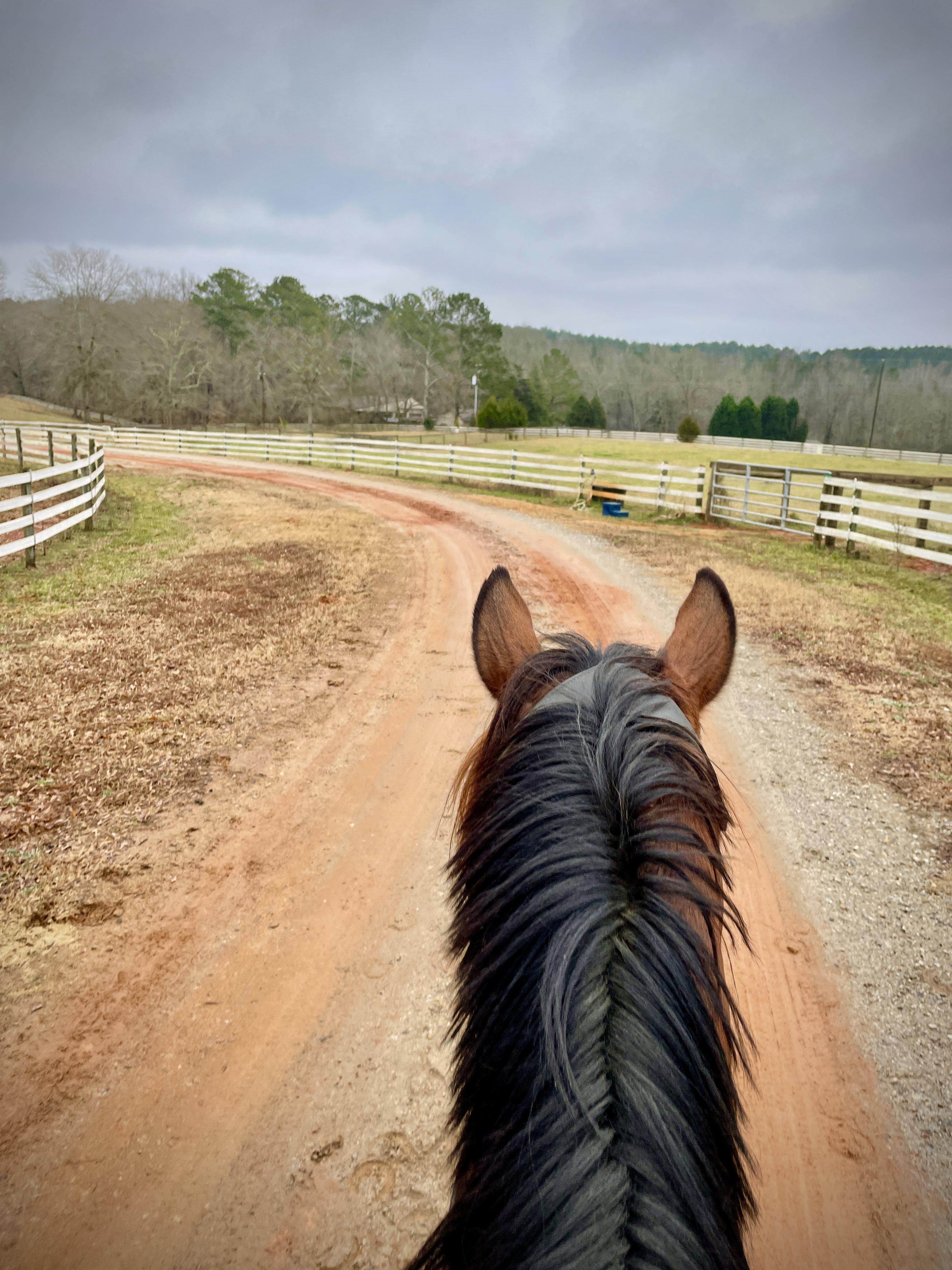 A view of Cheese’s ears (AT A WALK!)  on a slightly less cold, rainy day. Photo by author.

So, Cheese and I trotted the bloody freezing road and I tried to find some way to romanticize riding with icy hands… I failed on that front — I was just an idiot with no gloves. And with lots of “easy, easy… no… Goofy, just trot,” we put in two good, forward miles before he wanted to offer any real version of a walk.

Mind, this fit little horse was far from tired. At that point, the walk was a choice. He was rewarded vocally, and when I could unfurl my fingers, he earned pats and scratches. We walked as long as he would allow – at points, about halfway from the five-bar gate back to the barn. Importantly, I? He? We? earned that walk. Did I encourage it? Yep. Was it was demanded? Nope. Good Cheese. 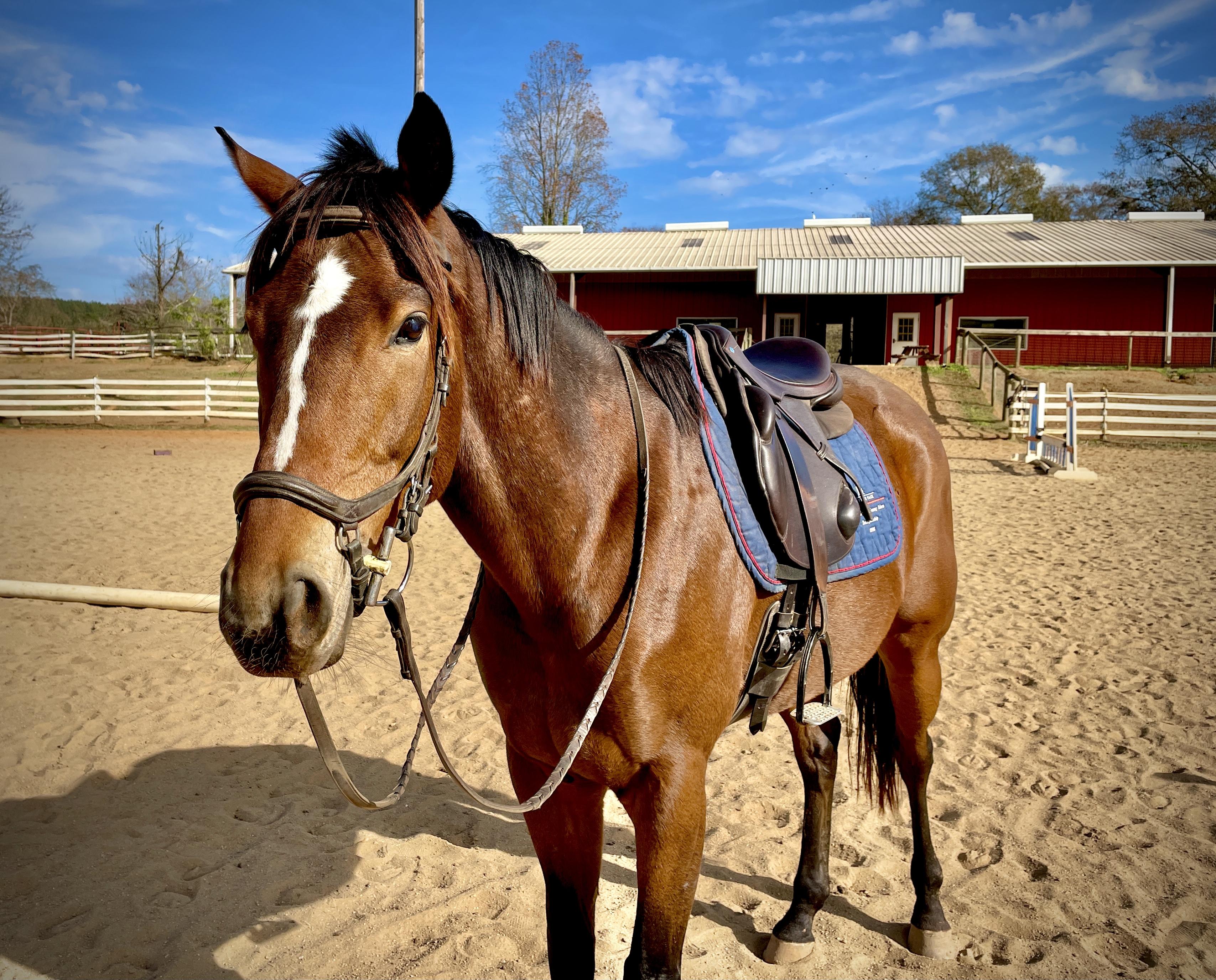 The cute goon (who was not sure why I was backing away from him with my phone up while telling him not to follow me) (“Cheese Whiz” JC: RW’s Retirement). Photo by author.

Let me note that in all of these cases, there is no “running away” with a rider. The horse simply isn’t ready to provide the engaged, slower gait. And while I go trotting or cantering along, I might be hoping for a walk, but I’m not pulling for it. Instead, I work to get their brains engaged, craft a steady rhythm and semblance of straightness, and then aim towards a functional bend and good hind end engagement. And when they start to soften to the half halts and willingly slow, then the walk can exist (even if just for a few steps). And when you earn the walk by (in a sense) giving up on it, the slowest of gaits can be exciting (even if it doesn’t look particularly remarkable).

In that vein, about two weeks ago, I started hollering for my working student, Audrey. I was riding Seeker (JC Hot To Seek Her) and after about 20 minutes of quite forward going, he took a breath and settled into a steady, on-the-buckle walk. I wanted a witness. She came hustling out of the barn expecting fireworks and laughed at me when she saw what I was so animated about. Yes, working here (like riding these horses) also requires a somewhat-odd sense of humor. 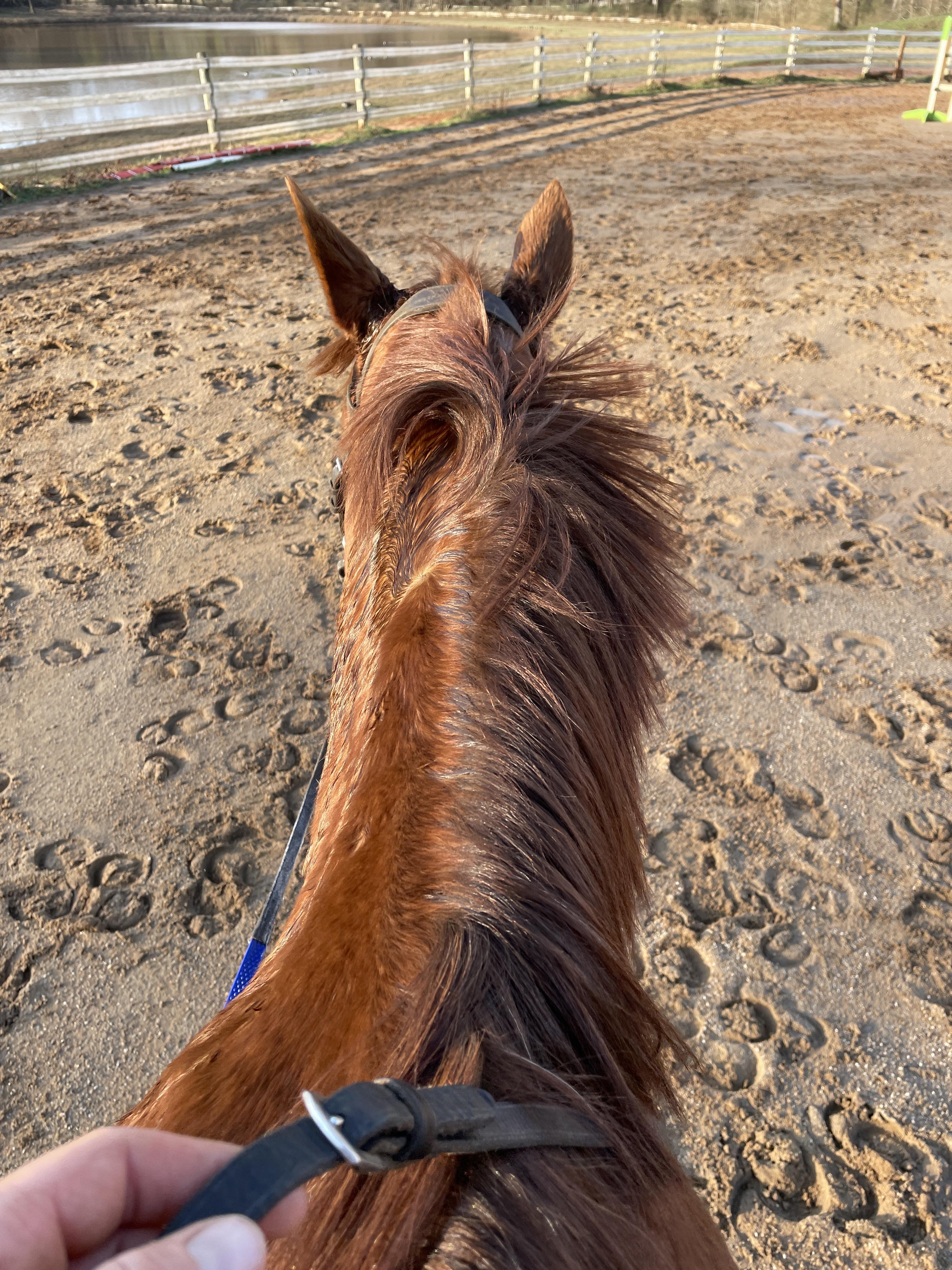 Seeker walking on the buckle. Photo by author.

So, to close up this week, we go back to the warmup arena. This time, a former sales horse of mine entered in the Amoeba division was incidentally teaching her rider to piaff and passage. “How’s she doing?” I asked the rider’s mother on the rail. “She won’t walk,” she responded, clearly a bit stressed. With no trainer there to help, I got to be the annoying voice hollering across the arena to give up on the walk and go trot. “The walk will be there,” I shouted, “Just go forward and have fun first.”