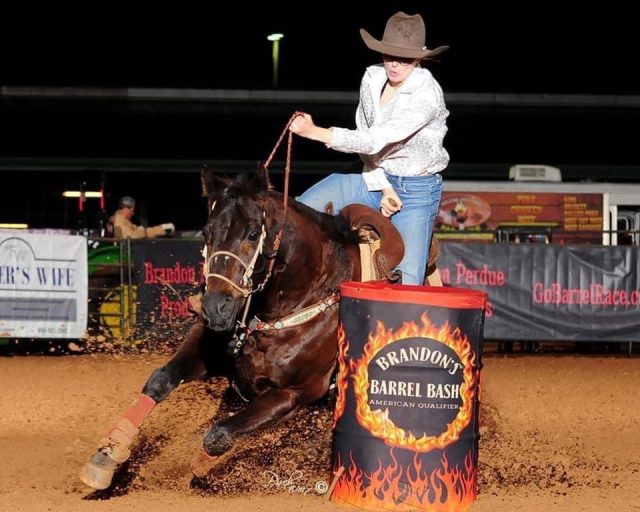 New for 2022! Horse Nation is excited to announce that we’ll be offering limited event coverage and recaps. To kick this off, we’re bringing you this recap of Brandon’s Barrel Bash & American Qualifier.

Brandon’s Barrel Bash & American Qualifier was held over the weekend of January 14th to the 16th at the Escambia County Equestrian Center in Pensacola, Florida. The race included an Open 4D and Futurity 2D as well as Derby, Youth, Adult, Senior and Novice side pots. There was also an Open Average that paid based on a two-run average from the three Open 4D races with each competitor’s slowest time dropped.

With over $80,000 paid out during the three days, there was quite a bit of money and prizes to be won! The main event was sanctioned by the International Barrel Racing Association and the Women’s Professional Rodeo Association. Tash Welsh and Seis Smashin Fame kicked off the event by winning the Friday Open with a 14.652 second run. Seis Smashin Fame is a seven-year-old stallion by Tres Seis and out of Smashin Ta Fame, by Dash Ta Fame. Emma Kate Parr and Pipe Down Compromise won the Friday Youth and Cambrie Delaune and VF Leo Stinson won the Friday Adult.

Abby Gray and His Effort Can Do It with event organizer Brandon Perdue.

Abby Gray and His Effort Can Do It

Angel Rae Miller and Mother Ofall Dragons won the Open Average. Their two fastest runs were a 14.496 and a 14.527 which placed them 3rd overall on Saturday and 2nd overall on Sunday. Mother Ofall Dragons is a five-year-old ApHC mare by Bp Phoenix Reign and out of Indigo Ice, by Darkelly. This pair also placed 3rd in the American Qualifier and will be advancing to the Semi Finals.

The Futurity class showcased four-year-old barrel horses. On Saturday, Lacey Simmons and Blazin a Famous Lane, a gelding by Blazin Jetolena and out of Rebs Little Fame, by Dash Ta Fame, took the top spot in the Futurity 1st Go with a 14.761 second run. Chloe Gray and Bar B Charmed At Six, a filly by Frenchmans Six Dash and out of Iza Starr, by Sixes Royal, won the 2nd Go of the Futurity with a time of 14.812 seconds.

You can watch coverage of the entire event at: https://www.youtube.com/c/321ACTIONVIDEO/

Here’s the complete list of barrel races Horse Nation will be covering and/or recapping in 2022:

Horse Nation barrel racing covering is brought to you by Katelin Parsons and Kayla Zielke.

Katelin Parsons is a full-time Agronomist and part-time barrel racer. She is from Northern Wisconsin and began competing in gaming events at a young age. She has competed in Western Pleasure, Dressage, Endurance and several other equine disciplines, but has always been drawn back to Barrel Racing. Katelin is also huge Thoroughbred racing fan. She has adopted several off-track Thoroughbreds and has found that they do well running barrels when they have the proper training. Inspired by the talent and athleticism of the Thoroughbred breed, Katelin created The Western Thoroughbred, a social media network dedicated to promoting the use of Thoroughbreds in western disciplines. She is continually adding educational and engaging content to the site. As former Miss Rodeo Wisconsin, Katelin hopes to return to the rodeo arena one day as a competitor – maybe even aboard a Thoroughbred!

Kayla Zielke has been fully devoted to anything horse related her whole life. She’s a horse trainer who specializes in colt starting as well as an equine massage therapist, barefoot trimmer and barrel racer. She’s a self proclaimed horse nerd that takes great interest in bloodlines and horse racing. Her racing interests led her to her passion of retraining OTTBs for second careers in western disciplines and becoming an ambassador for The Western Thoroughbred. Kayla has shown in everything from showmanship, reining, and barrel racing to colt starting challenges. She takes pride in developing all around horses no matter the breed or bloodlines. Kayla is based in Southern Alberta where she runs her business Eclipse Equine and enjoys her small personal herd of Thoroughbreds and Quarter horses.