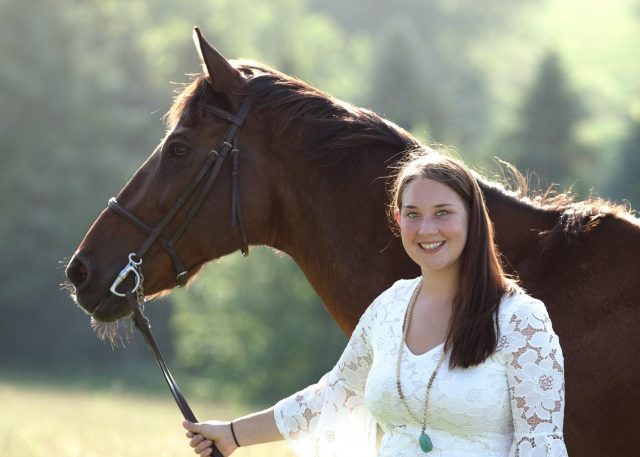 January 13, 2022DeAnn SloanReader Submission#ESSAY, #YOUR TURNComments Off on For the Love of a Horse: A Story of Recovery and Growth

Reader Julia Kranz shares this deeply personal story about how her heart horse helped save her life and aid her recovery. She purchased Orion 11 years ago, and his presence has motivated her to stay healthy and build a career helping others.

Note: This piece contains words or imagery regarding eating disorders and suicidal tendencies that may be triggering. If you feel you may be triggered, do not read this piece. If you are reading and feel triggered, seek help and call 911. 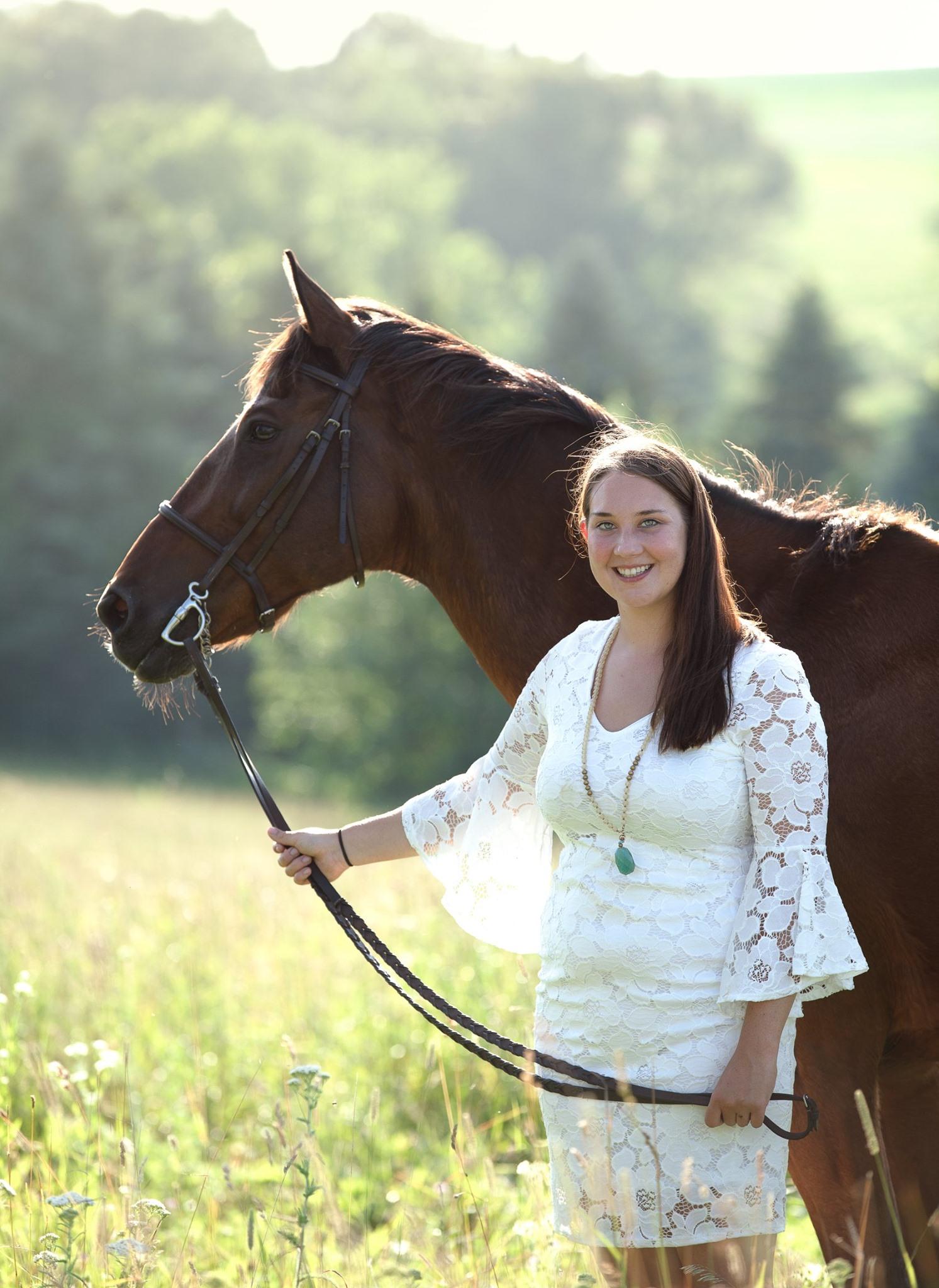 I first met Orion in the winter of 2008. He was purchased by a fellow rider at the barn. It was love at first sight. I was in awe seeing him canter those 10 meter circles that cold December day. After I was asked if I could hold him while his owner helped others. I felt quite honored to hold this wiry bay appendix gelding. He stood like a true gentleman but was so vibrant. It was the first time I ever felt captivated by a horse’s presence.

I eventually landed my first job working at this lesson barn that following fall, tacking horses and doing chores, seven days a week. Orion by then had lost his charm in my eyes. He seemed dull and soured. I saw by then he had chronic skin issues, cribbed nonstop and, from his owner and other boarders’ remarks, was sour and untalented. In my eyes he was just another horse. That same fall I purchase my first horse. A very green mare my parents and I bought on impulse when my dad was back from Iraq. My parents were desperate. They were willing to try anything with the hope it would loosen the grip of my anorexia. I had spent the previous year in and out of the hospital.

A year later my mare and I didn’t fit so I sold her. I also wasn’t any more recovered from my anorexia. While I started a new horse search, I was offered the opportunity to lease Orion. I agreed to lease him with the encouragement of my trainer, but turned down the lease to own offer.

I did not want him. Especially because he wasn’t the finished unicorn I remembered seeing that December day. Orion was now a traumatized mess from spending the summer with another trainer being pushed to be a jumper when his training was founded in the hunter/dressage ring. He was stressed and confused. He couldn’t even canter around the outside rail relaxed without moving laterally or overcollection. If jumping was on the table, he would run sideways towards the fences. This horse needed a major reset and I wasn’t interested in doing it.

However, as I spent time with this horse, grooming and giving him attention on the ground because, truth be told, my own physical health was not suited for riding, that original spark started to come back. The horse who I felt was a lost cause started to grow on me. He was still an anxious rocket, but he seemed to be gaining his confidence and natural curious nature back. My plan was to continue leasing him until I could find a more suitable partner.

Then I got a call on November 29, 2010 that someone was willing to buy him sight unseen because they had witnessed him win at most of the local shows the previous two years. I felt called to protect this horse from being retraumatized, so I did something I will never regret. I bought him.

Six weeks into ownership of this gelding, I hit my lowest point to date. I rescued a neighbor girl from attempting suicide by freezing herself to death, had surgery and had to tell my mom my dad was having an affair all in the span of 10 days. I relapsed hard and ended up in the hospital for the fourth time in two years. However, despite all these things, this time was different. It was the first time I wanted to fight. All because I had a friend to get back to. This friend accompanied me to meals via a framed picture a fellow rider had given me for Christmas and sat with me through the anxiety after meals via YouTube jumping videos.

That spring and summer were a constant two steps forward two steps back. My Orion kept me motivated because if I wasn’t at a healthy weight, my doctor would make me stay away from the barn. No work and no riding. I couldn’t afford Orion without my job and I wanted to jump. Things were making gains (figuratively and literally).

The fall I hit a wall. I was unhappy I wasn’t going to the college I wanted due to my illness. Then I was told by my treatment team that they didn’t feel like I was able to make the progress they wanted and they were recommending a nine-month residential stay in another state. They said they would give me six weeks to show any improvement or they would no longer feel competent to treat me.

I went home from that appointment defeated. I drove into my parents’ garage and shut the garage door behind me with my car still running. I was done. I was done with anorexia and done with life with anorexia. While I sat there, I remember my mom’s words crossing my mind.

“If you die, the horse will be sold.”

What about my dear Orion? I just got him back to himself — what if he goes backwards? I immediately turned off the key and called my mom and asked to go to the ER.

I am proud to say I fought that day onward with the help of my treatment team, my family, my friends and my biggest motivator — a cribbing, fungus-ridden horse. I can say I am fully recovered and have been for over five years. I now am a licensed therapist and help others in their time of need. I still have my best friend and though our time together is getting closer to ending, there is nothing I won’t do to make my friend’s time here the best. I am thankful every day that I am here for the love of a horse.

Julia Kranz is a licensed clinical social worker who specializes in trauma in the state of Minnesota. She works full time for the public school system as an elementary school social worker and part time as an in-home family therapist. She predominantly rides for fun and has owned her gelding Orion for 11 years.