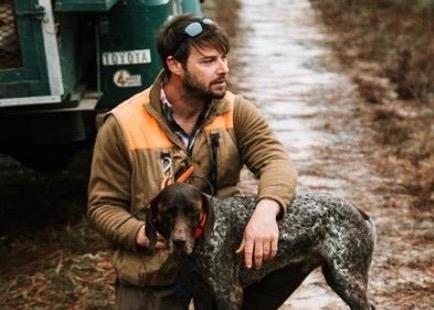 With Veterans Day this week, Horse Nation wants to celebrate and thank all the veterans out there. Personally, I’d like to do so as well.

The connection between veterans and their animals has been an important, yet understated part of my life. When I interviewed Patti Gruber for the Standing Ovation column connecting Veterans and Mustangs through Operation Wild Horse (read it here), the pieces fell into place. Her words helped concretize the importance of the connections between the individuals who gave years of their lives in service of their country and the animals who bring them joy and facilitate trust within their civilian experiences.

Having witnessed similar things with the people I love, I found that I couldn’t write the forthcoming interviews without a personal introduction. This is part one of the series.

I grew up in a household filled with animals. On our quarter-acre in Chester, CT, we often had three dogs, six cats, reptiles, hamsters, rabbits, birds, and any number of other creatures in tanks, cages, or underfoot. (The small series of horses that I owned were boarded across town.) My parents both embraced and tolerated the new creatures that my two older brothers and I would bring home. Most summers it would be bullfrogs, other months, it might be a stray kitten, a painter turtle or anole lizards captured in Florida. 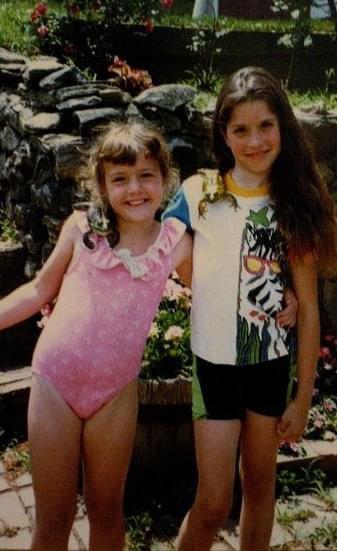 My best friend, Erin Calamari, myself, and our bullfrogs back in the early 1990s. Photo by Pamela Graham.

Dogs were always a constant, though. They were a part of my life where my usually-quiet father could talk, teach and clearly find joy. It was easy to spend time with him with the dogs – and I learned to train golden retrievers (and German Shepherds) well before I learned to train Thoroughbreds – though the similarities both in emotion and technique are expansive. That said, my dad categorically does not do horses. He calls them “giant rabbits” for their skittishness and prefers to watch from a distance unless I thrust a lead rope into his hand. 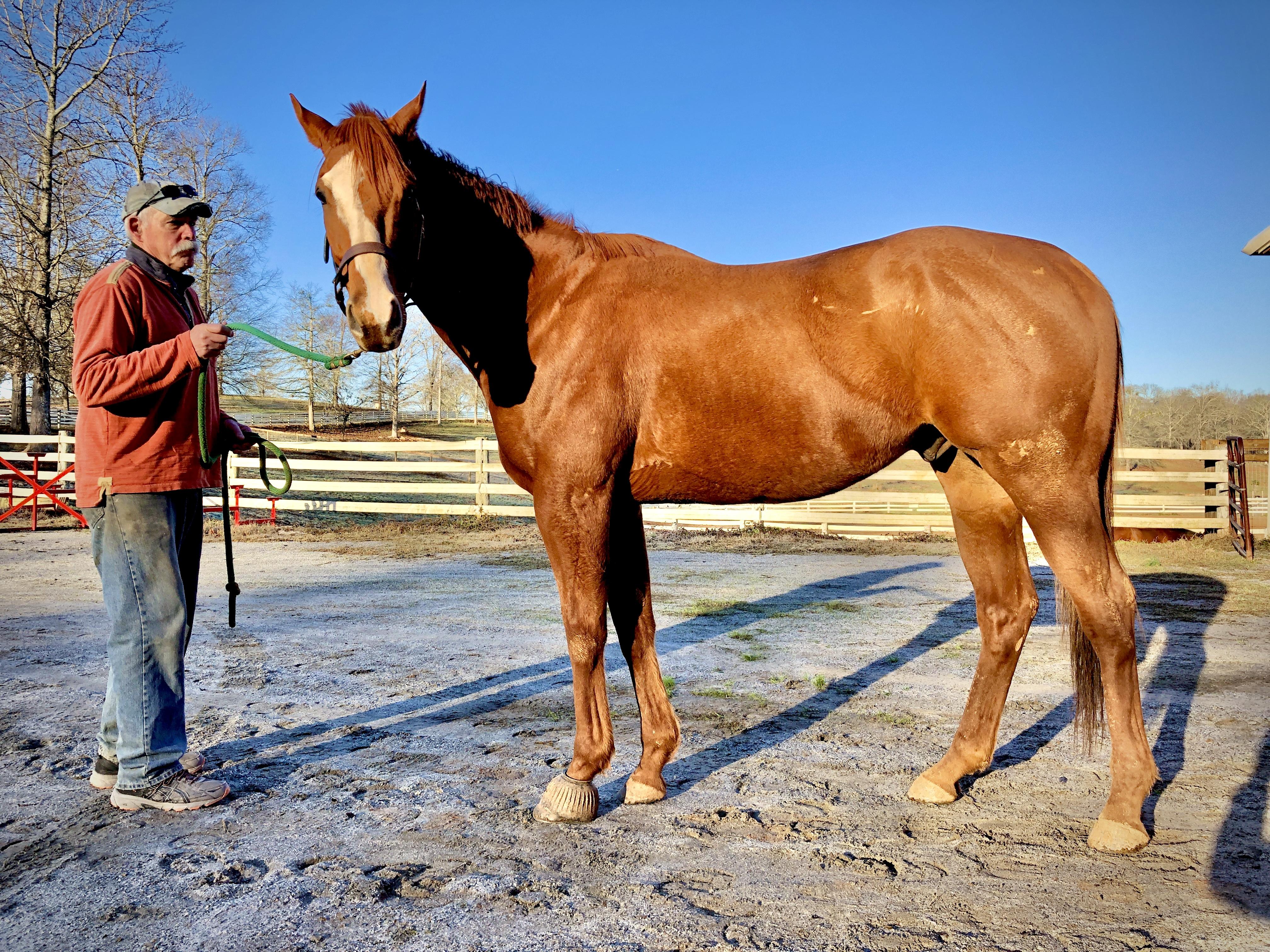 Allen Graham enlisted in the Army after his first year in college, and upon completion of basic training he shipped to Vietnam in 1968 with a Military Intelligence unit. As part of the 1st Brigade of 5th Mechanized Infantry he worked along the demilitarized zone (DMZ) until the end of his first deployment in 1969. 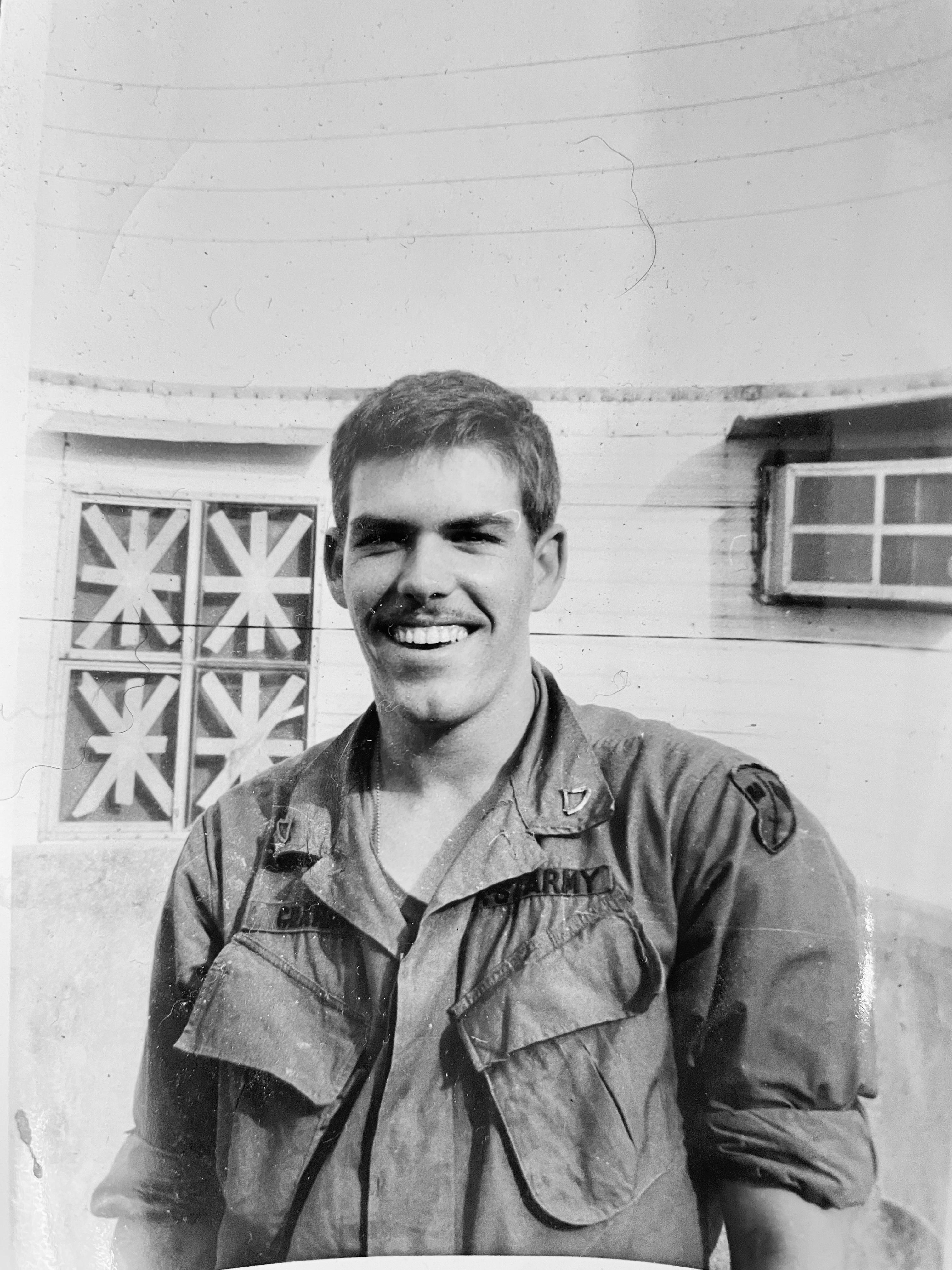 These are his words… though they were occasionally punctuated by him talking to his current, white Golden Retriever, “Olga.”

The experience of true combat veterans is not mine – I experienced parts of that, sure, but not like they did… even still, it still bothers me to talk about it. No one knew what PTSD was when we came back. I just blew by that and concentrated on school and moving forward. You bury a lot of that and just try to go forward.

I have a better relationship with animals than I do with people. Animals don’t judge. Goldens are like, “I love you no matter what.” For me, I’m much calmer with dogs. I have a short temper – I try to work on that where I can. I guess I get frustrated easily… not having control over things.

When I got back, I went back to school and focused on that. Well – on that and your mother. Thank goodness. She was a better calming influence than anything. Life just went from there. We lived in small apartments and had a cat when we weren’t supposed to. You can’t hide a dog, so we didn’t have one until we moved up here [to Connecticut].

That’s when we got Farrena [a red field Golden Retriever]. We spent tons of time with her and trained her. Work in public accounting was frustrating; I hated it, but I could always go home and work on training her. She would always look at you with those big brown eyes and try to do whatever you asked…

When Farrena delivered her puppies, the 13th puppy was a surprise. There was a blizzard and I had to force the back door open; she jumped out into the snow and dropped the last one out there. I had to dig through the snow drift to get the puppy. It was interesting, but that puppy ended up being white.

I bought a 49c book on how to train your golden retriever. There wasn’t internet then, and that was all we had — so you just did it. You just come home from work and you sit and work on things. She would catch frisbees 100 yards away and come back and sit on my left and wait for you to take it – there wouldn’t be a mark on it. 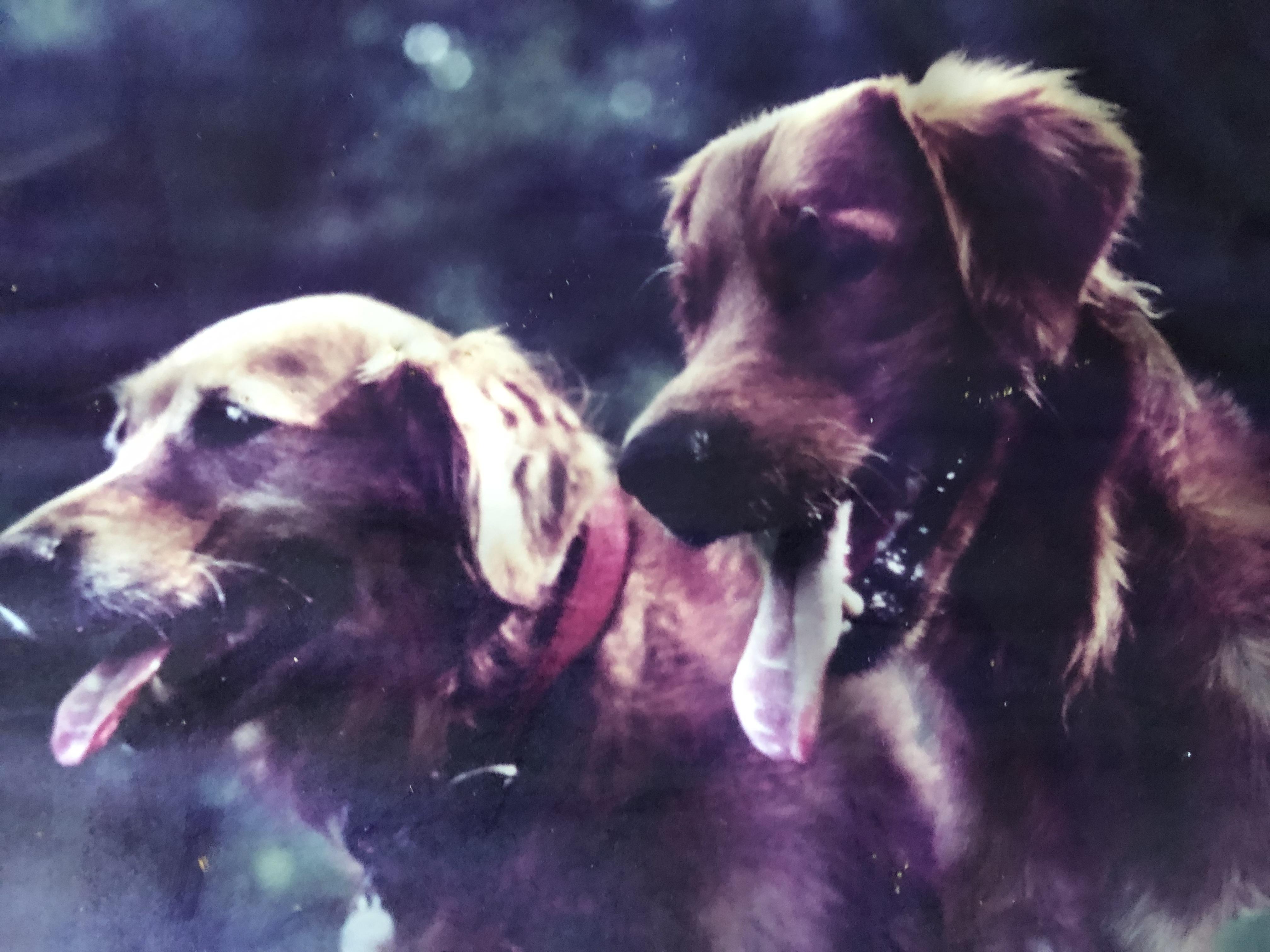 Farrena and her son, Brutus. Photo courtesy of Allen Graham

Neither my father nor I particularly trust people. And when I brought that up, he joked that some of that might be hereditary. “No, I suppose I don’t trust people. I mean, I’ll trust them with some things, but I want to verify anyway… well, I suppose that’s not trust then …” He laughed, “Dogs I can trust because I train them and they’re going to try to do what you ask them.”

Once I took Farrena out with that shotgun that I gave you. I went bird hunting and decided then that I don’t like bird hunting. I never did that again. [he paused for a minute] There were too many connections for me. Too many reeds moving in the wind… me holding a giant gun. I didn’t want to kill anything, so I never went back out. I never did get that pheasant. 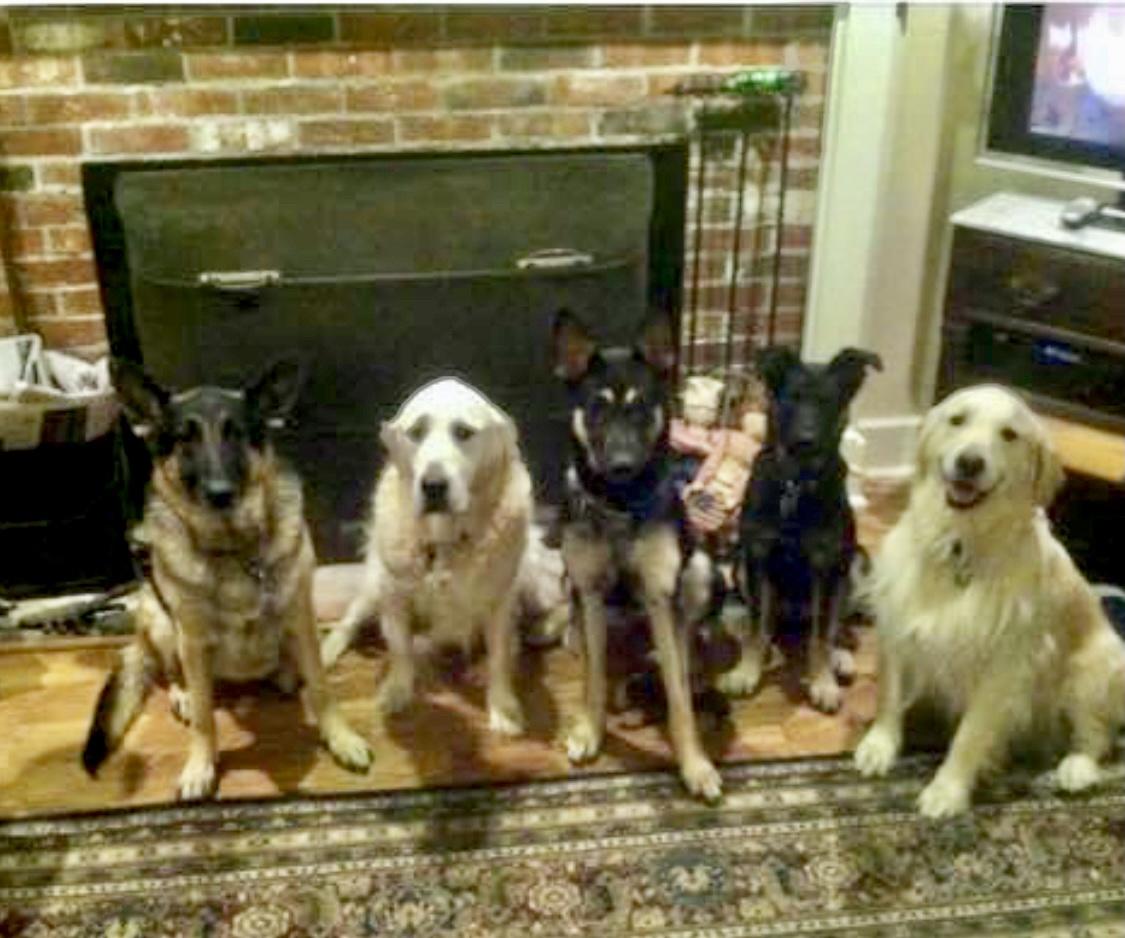 Dogs remain a constant in my family. Eight years ago we had Indy, Talulah, Layla, Walker, and Mathilda at my family’s place for the holidays. Photo courtesy of Benjamin Graham.

Dogs for him were important, a means for love, joy, acceptance, trust, and a way forward. I see similar things in my current partner. Shane Drake, a former “green side” Navy Corpsman who was active duty with the Marines in Iraq and Djibouti, now trains bird dogs (notably, Germans Shorthair Pointers (GSP)), guides hunts, and manages a large farm to the South of my training center.

While Shane had grown up with dogs, after getting out of the service and undergoing a number of career changes, he found peace on weekend hunts with friends and their dogs. Eight years ago, he acquired Si, his first GSP and trained him to point birds from friends’ advice and YouTube videos. His farmhouse now vibrates with three GSPs and the steady movement of an older, lovable mutt. 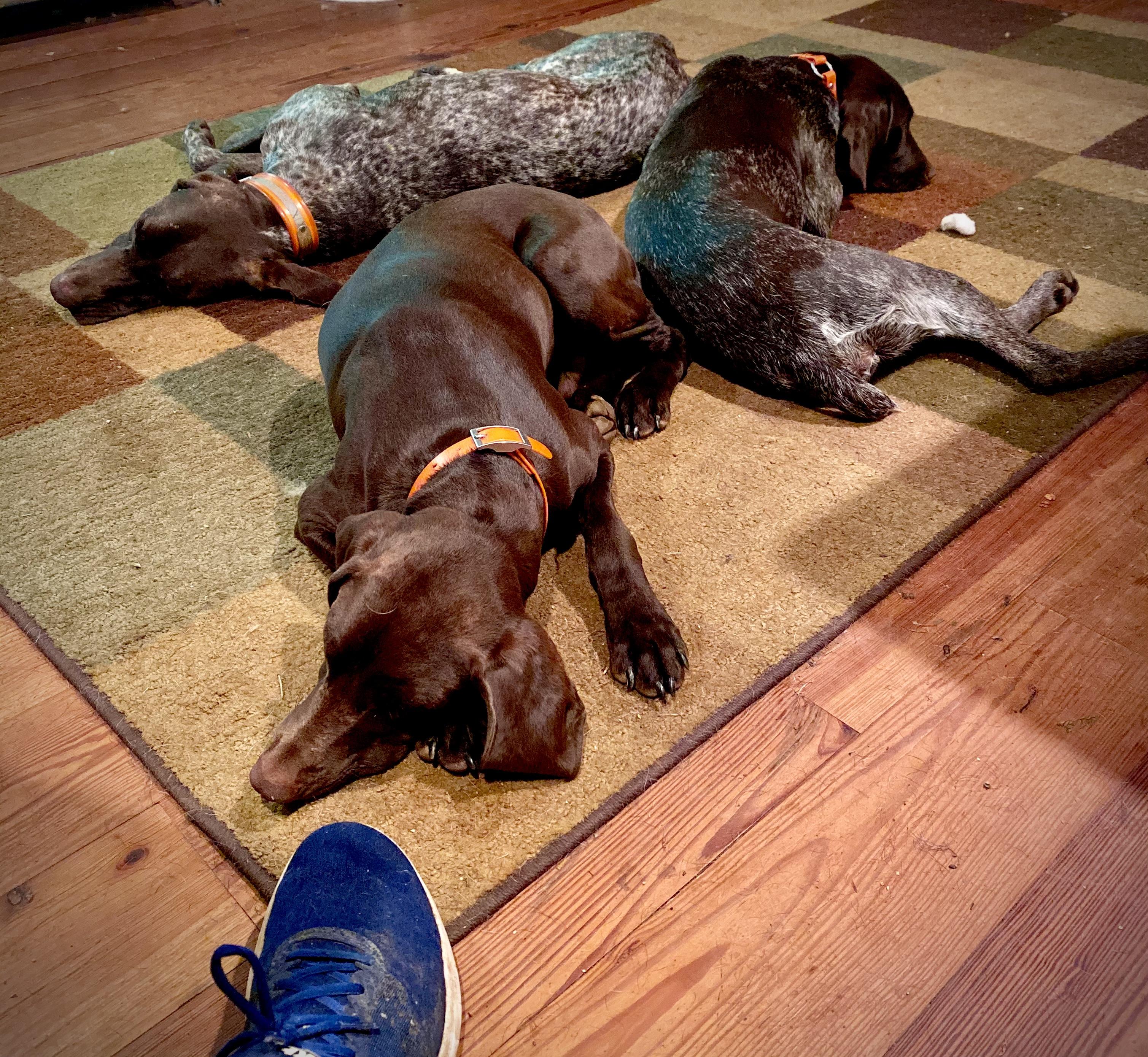 A rare quiet moment with Si, Peach, and Ruby. Photo by Shane Drake.

“I don’t know how to describe it…” he began when I asked about his relationship with the dogs. “They talk to you without saying anything. I don’t trust people, especially the people that you should be able trust, but I can sit down when I’m having a shitty day and decompress with the dogs. When it comes to the training, it’s rewarding to see how you grow with them and progress through things… after that, it’s about living with them, and having them sit there with you on days when you can’t talk to anyone else. Through your training, you learn to communicate with them and then, they’re willing to listen to you about those other unrelated things.” 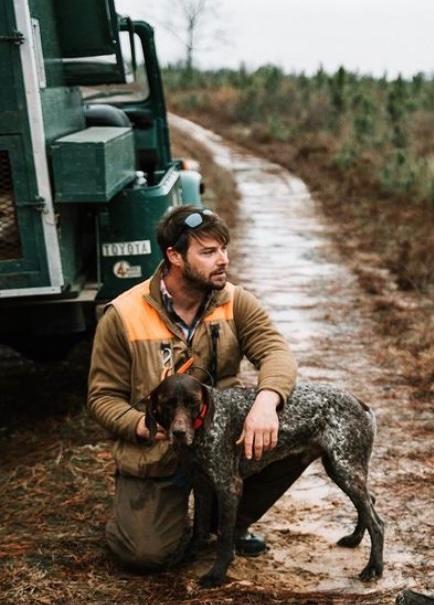 From an outside perspective, it is fascinating to watch him learn to do the same thing with my horses. On days that are too wet to work his farm, if Shane isn’t in my barn building something (most recently that would be a pigeon trap), there are two places you’re likely to find him. One is tacking up my former almost-upper-level eventing partner, Don’t Noc It (Forrest) in western gear. The other location is standing quietly with Mountain Holiday (Mountain) in or at his stall window. Mountain is on stall rest in therapeutic shoes, and like any good 17-hand, five-year old Thoroughbred, at three months-in, Mountain is frustrated. 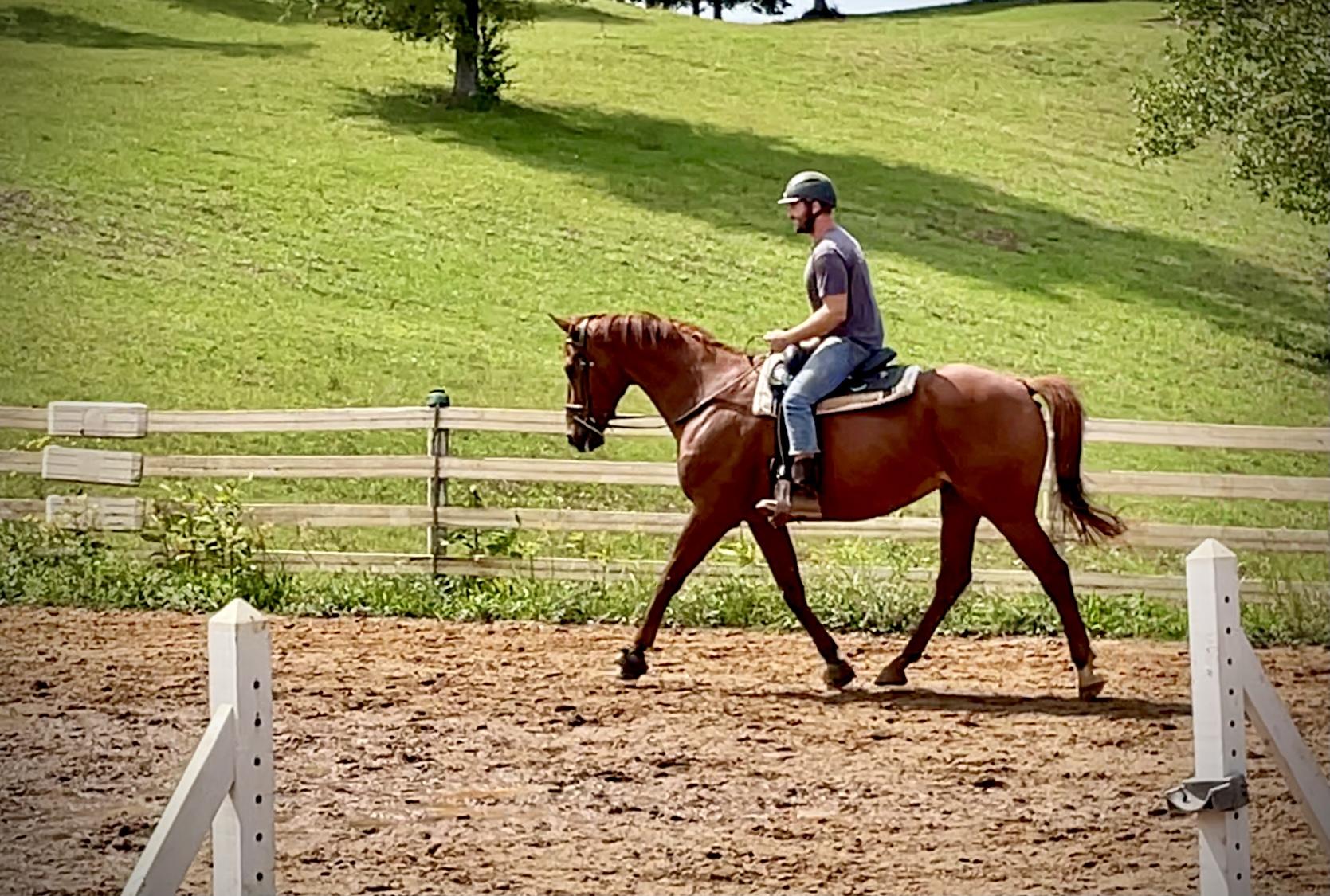 No one three years ago thought that this would be Forrest’s occupation. Well done, Llama. Photo by Aubrey Graham

When I asked Shane to explain why he spends time with Mountain, I mostly got a shrug. “I just go hang out with him to say ‘What’s up?’ He’s a cool horse and it sucks being stuck in a stall. They need some kind of mental stimulation. But I’m still learning. It’s not like with the dogs yet. I’m starting to learn their expressions, but I’m also learning how they [horses and the dogs] can be the same.” 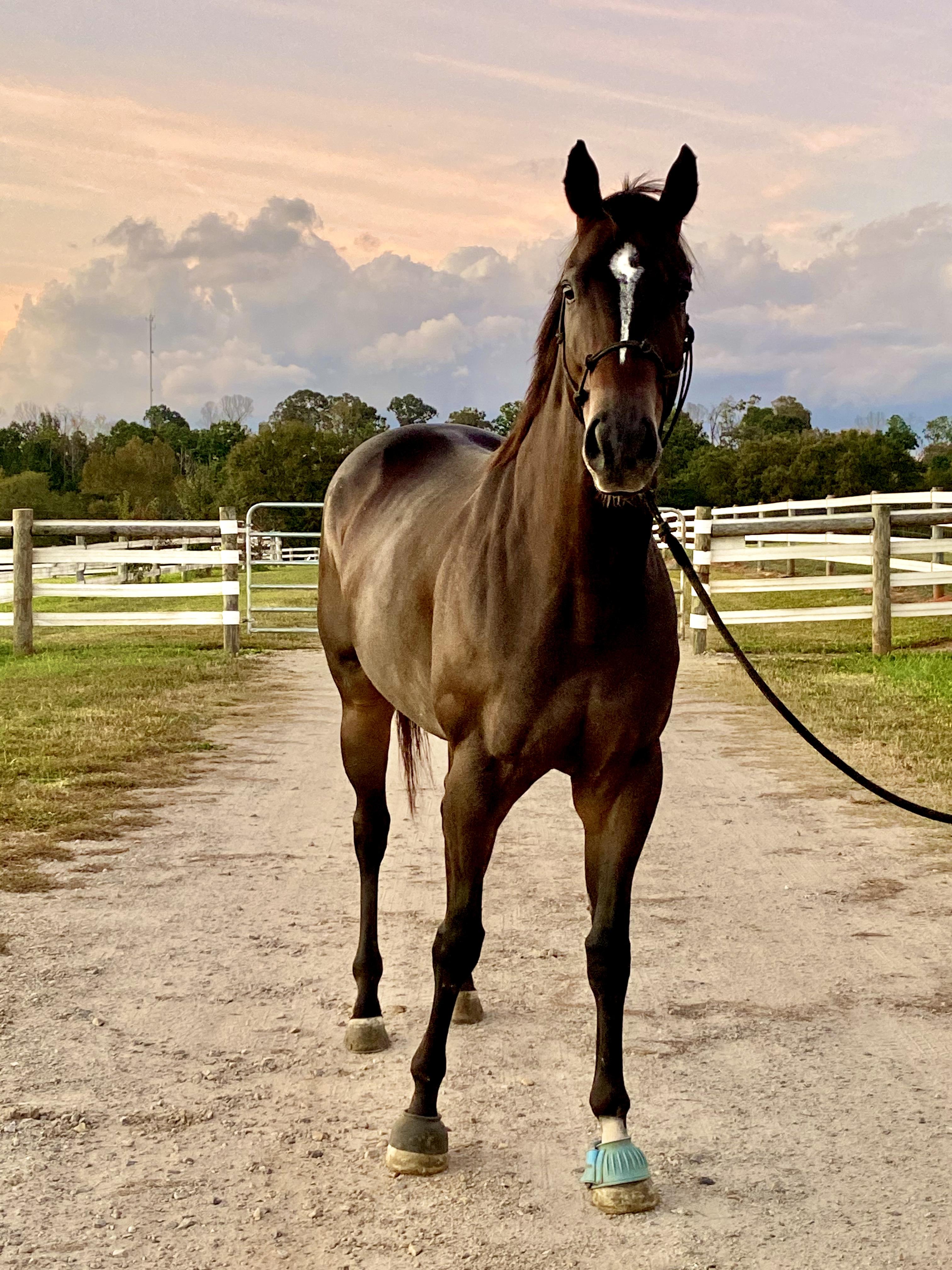 Mountain out on a daily walk. Photo by Shane Drake.

And for many they are. So, from that personal tangent about dogs, fathers and partners, I’ll jump into the rest of the series where we explore that particular connection between veterans and their horses. Hint: The connections are extraordinarily similar and equally important.

Happy Veterans Day folks, thank you for your service.