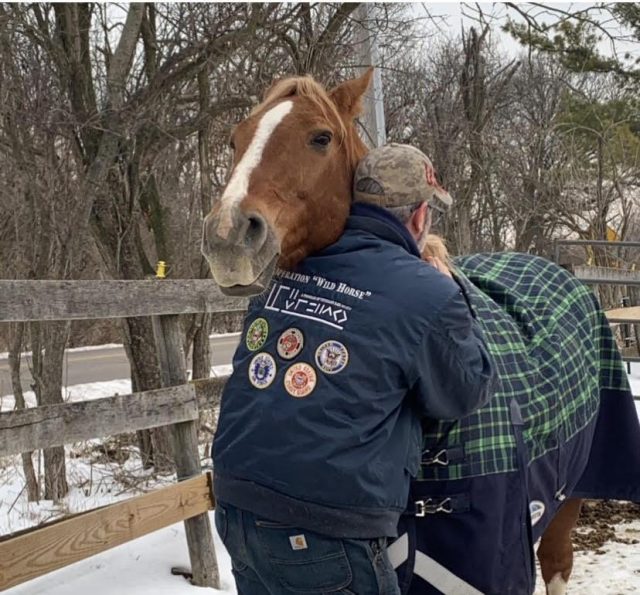 Operation Wild Horse is the success story of Mustangs, veterans and one determined dressage trainer. Learn more about how Patti Gruber is helping hundreds of veterans every year through equine interaction.

In Bull Valley, Illinois, the heavy gates to the Bull Valley Equestrian Center mark a point of transition for hundreds of American military veterans annually. As the metal clatters shut behind them, Patti Gruber, Founder and Manager of Operation Wild Horse, explains that “from that point on, they can leave the rest of the world behind.” Ahead down the road, there is a barn brimming with Mustangs and space for horsemanship, friendship, and healing. 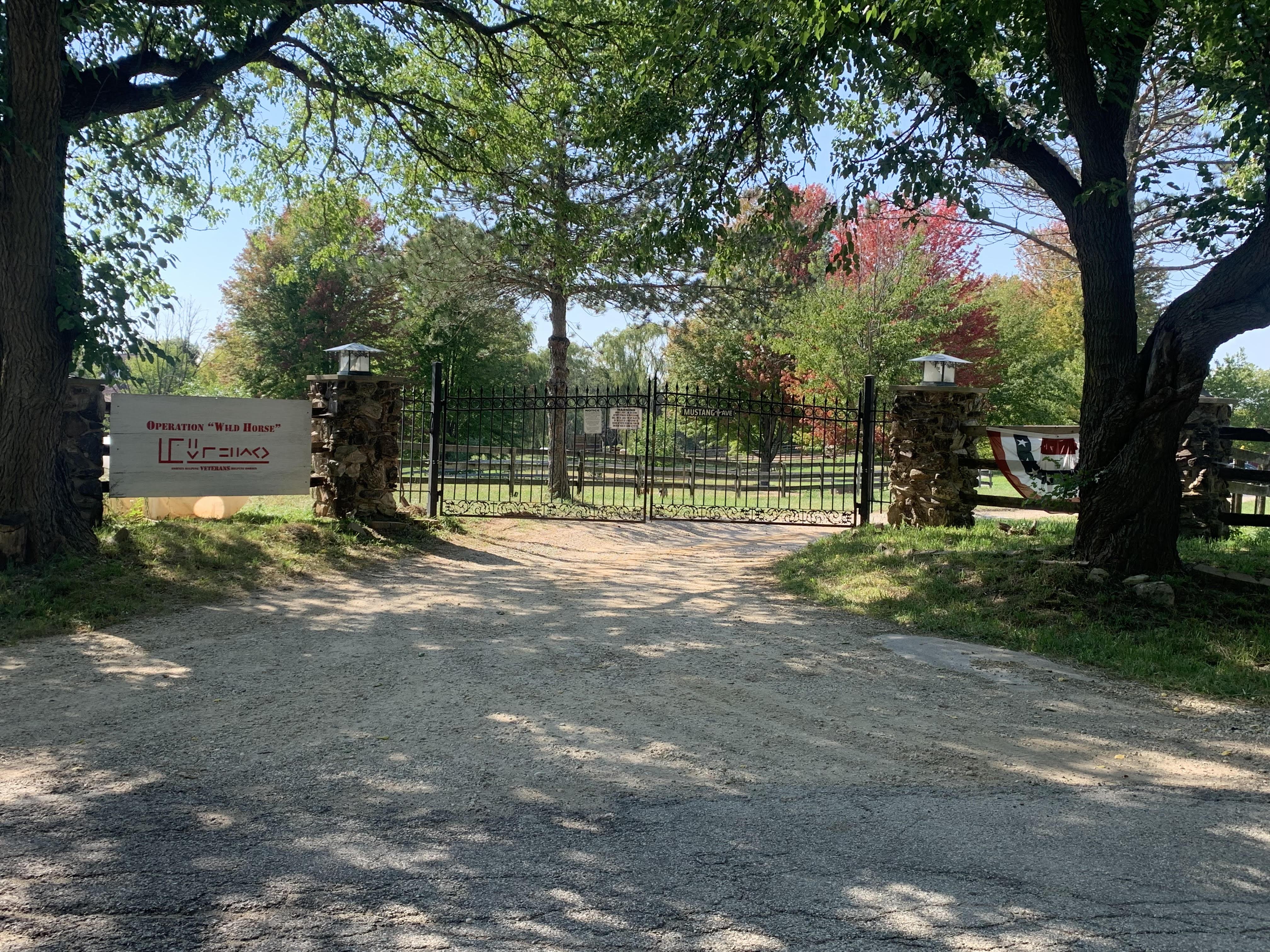 These gates of the Bull Valley Equestrian Center represent a distinct passage from the stress of daily life to the camaraderie and healing possible through the Mustangs contained within. Photo courtesy of Patti Gruber.

Gruber’s concept of equine interaction with veterans is not about standard “therapy.” “Tell a vet that this is therapy and they’re going to run the other way,” Gruber explained. For her and those involved in Operation Wild Horse, the doors are open and the connection with the horses is organic. Gruber offers horsemanship classes and teaches veterans how to approach, lead, groom and ride, but the veterans can also just show up and spend time with “their” Mustang. 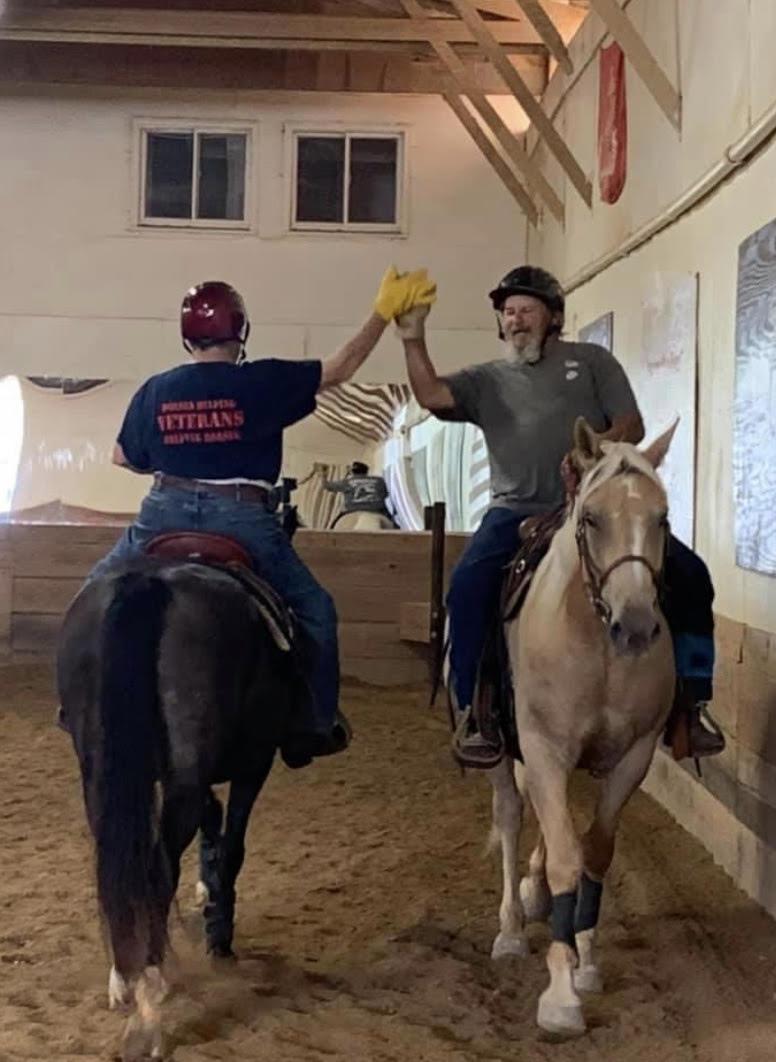 Veterans and their mustangs ride in a class offered by Operation Wild Horse. Photo courtesy of Patti Gruber.

Peanut Butter, a 17-year old, 14-hand sorrel mare from the Desatoya Nevada herd knows this all too well. When Jack, a 70-year-old Vietnam Veteran visits, it is Peanut who he cares for and rides. Through Operation Wild Horse, Peanut and her fast trot (Jack also holds the title as the only veteran who can get Peanut really moving) has changed Jack’s life. When Gruber asked to qualify that, he noted, “Well I’m not throwing people off barstools anymore,” then, “I have done more healing in this program than in the last five years of therapy.” 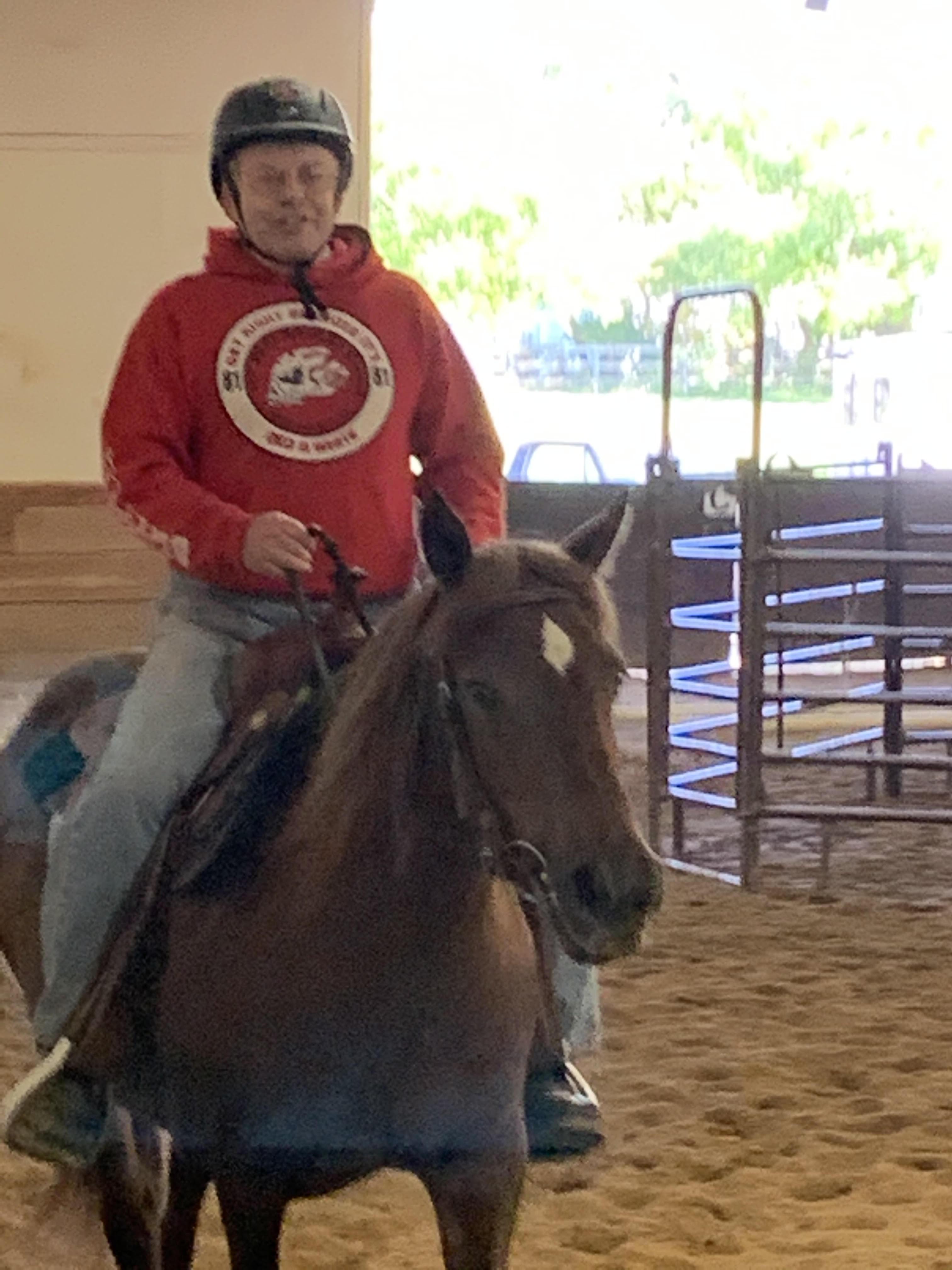 Jack and Peanut have paired up and helped to motivate positive change in Jack’s life. Photo courtesy of Patti Gruber.

In 2015, Gruber pitched the idea of Operation Wild Horse to the head of Veterans RandR; the idea was met with skepticism concerning what the veterans and Mustangs might have in common. Gruber, who had adopted, trained and successfully competed her Mustang Padré in sport horse breeding stallion classes at dressage at Devon, remained resolute. For her the connection was clear:

Civilians joined the military and, once there, they’re not given a choice of what happens to them. Mustangs, rounded up and brought into domestication, also had to manage the lack of choice. “They are both fight or flight animals, and they have to (re)learn that life isn’t all about that all the time. Being able to bring them together to live a domesticated life after that part of the journey is pretty magical,” she noted. 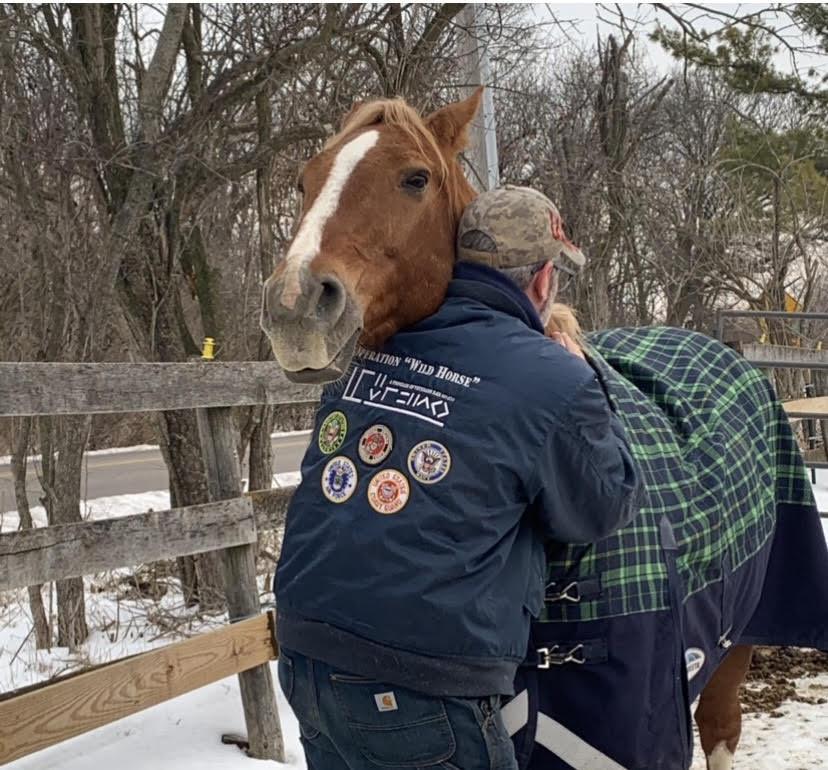 An example of the connection between veterans and Mustangs. Photo courtesy of Patti Gruber.

In 2017, Operation Wild Horse officially opened those gates to veterans. What started with four Mustangs, has now transformed into a program with 13 Mustangs and two burros. The program, which at first had to reach out to take on veterans, now has every branch of the military represented. In addition to the horsemanship and riding lessons, Gruber offers Saturday morning coffee and donuts with the horses, weekly camp sessions for male and female veterans, and opportunities to ride in color guards, parades, and to take the riderless horse to funerals and memorial services. 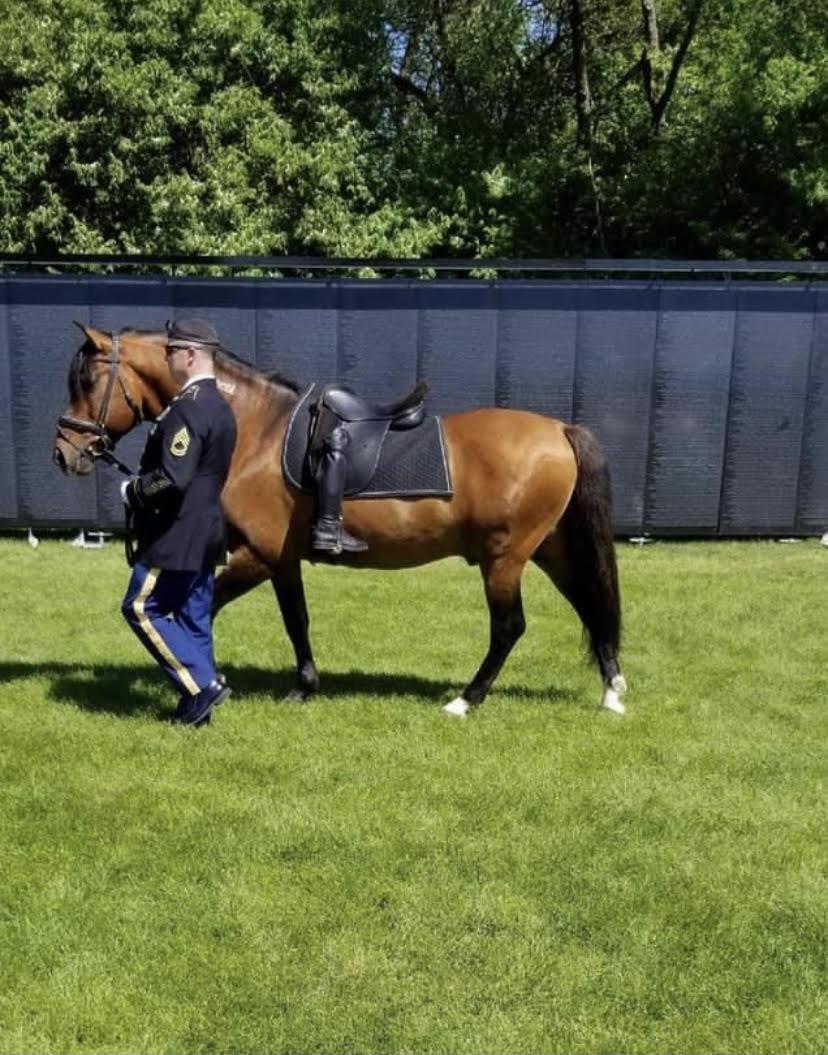 Padré and a service member providing the riderless horse for a memorial service. Photo courtesy of Patti Gruber.

Gruber’s passion for bringing veterans and Mustangs together drew from both her equine experience and family history. Gruber, who is an accomplished dressage trainer, saw the hope that an underdog, a $125 Bureau of Land Management (BLM) Mustang, could bring to the nation. Padré was the first wild horse to earn sporthorse stallion breeding status. Moreover, he was the first wild horse to compete in Dressage at the Devon Horse Show. His story became a buoying one which, through book chapters, children’s stories, and a Breyer Horse, inspired greater awareness of and support for America’s wild horse, including those who remain on BLM land, the more than 50,000 that populate the holding pens, and those who have been adopted. Gruber was resolute to use Padré’s success to give back – and she knew how. 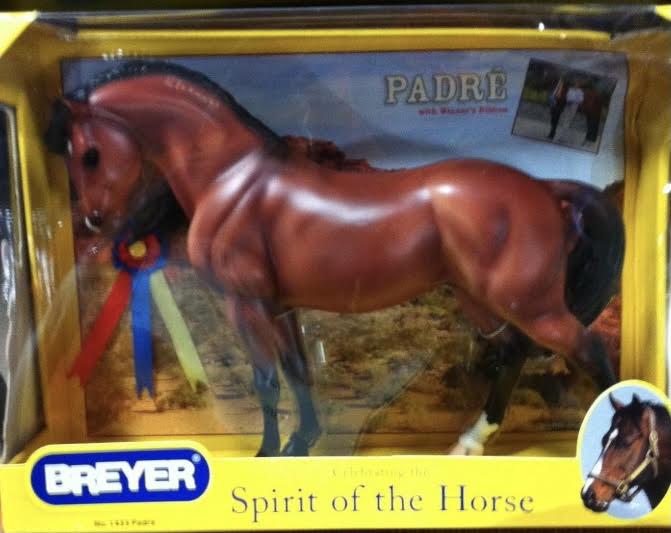 Both of her grandfathers fought in World War II, but each came home to live a different version of civilian life. One wore the veteran’s hat, went to reunions and spent time at the American Legion. The other, who had been a prisoner of war in Japan, came home, self-medicated with alcohol, and rarely talked about his experience in the service.

Gruber’s awareness of the two distinct means of post-active-duty civilian reintegration led her to want to give back and help create healthy spaces for veterans to heal and feel proud of their service. Relying on her equine background, Gruber rented a barn and used her dressage training to stand up the veteran’s program. She is emphatic that without the veteran’s service to their country, she would not have had the ability to pursue her passion for dressage and the wild horses. 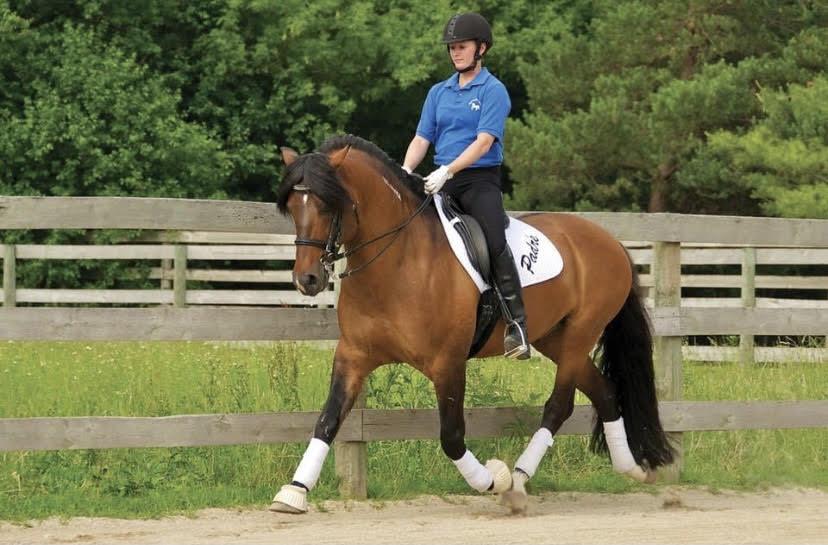 Looking forward, Gruber is excited about a growing partnership with Valley Vet as well as the potential of opening a red-white-and blue farm specifically for Operation Wild Horse. Further, Gruber and several her committed veterans will also be joining Lisanne Fear and Hannah Catallino for the Illinois portion of their cross-country ride “5000 Mustangs, 5000 Miles.” Fear and Catallino will be riding their Mustangs across the country to educate and raise awareness about the horses and inspire the adoption of 5000 Mustangs from their holding pens across the USA.

As this goes to press, Gruber and a team of her veterans will be gearing up for the saddle time necessary to make 22 miles a day a reality. While their travels will lend support to Fear and Catallino’s awareness campaign around Mustangs, the 22 miles a day will also stand to represent the 22 veteran suicides that occur daily. Yet again, Gruber and Operation Wild Horse will go on to prove that combining Mustangs and veterans can not only promote mutual healing, but each can also become a voice and a life force for the other.

Here at Horse Nation we love to recognize individuals and organizations that are doing good work in the horse world. If you know someone who deserves a Standing Ovation, we would love to recognize them in a future post. Email the name of the person or organization along with a message about the good work they do to [email protected]. Photos/videos are always welcome, and include a link to their website if applicable.