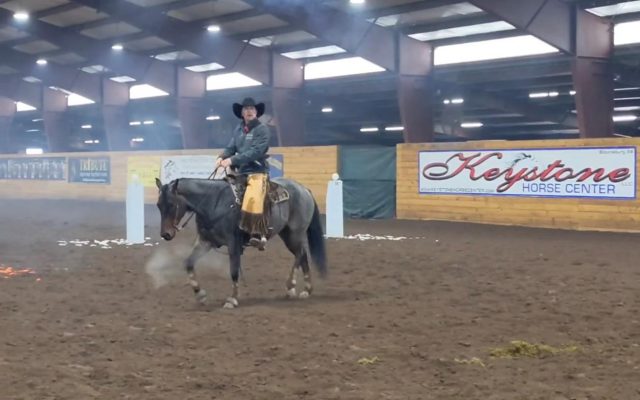 “Was Payco going to take to the gunfire and step into the shoes of a competition level mounted shooting horse?…if there’s any horse I have faith will do well and succeed, it’s the one I have…”

It is no secret that Buns sustained a serious injury, was rehabbed, and is now back to work as my main mounted shooting horse. He’s taken me from a level 1 to a level 4 in mounted shooting and has proven that his prior injury is now healed and holding up. How long his injured leg is going to hold up though is the million dollar question.

I went through the lengthy rehabbing process instead of putting him down because I love Buns and I want him around for many years. Unfortunately, there’s no way to determine how long his leg will be able to perform. Like humans or any other species, when something is injured it becomes a weak point. The chances of reinjury to that area are greater than that of a body part that’s never been injured.

Buns has a history. I keep that in mind every time I ride him — which is multiple times a week.

Over the winter I made the decision to purchase a young horse to bring along as my next shooting horse to take some of the stress off of Buns. I sought out a two or three-year-old in hopes of eventually competing in the CMSA Futurity in Murfreesboro, Tennessee.

The CMSA Futurity and Stallion Incentive is for registered four-year-olds of any breed. For the horse to be eligible, he can not have competed in any mounted shooting competition before January 1st of his four-year-old year. Exhibition rides are permitted.

Payco, my stunning three-year-old roan AQHA gelding, has been with Penley Horsemanship since April and will remain in training until the end of the year — which is quickly approaching. Over the past several months he’s progressed leaps and bounds in his training. Watching his improvement as he went from a young, green horse to a sensitive, well rounded mount has been an astonishing journey.

I was able to be present for Payco’s first time with the .45s and from the beginning he gave very little to no reaction. He continued working and going where Jared was telling him to go. I was also arena side to witness Payco’s first pattern. He went through at a steady pace without hesitation. I was so incredibly excited as I watched him. From that point on, Payco has been building off of that experience.

On some random afternoon Jared called me. I was nervous to pick up because in those split seconds I had convinced myself that Payco had hurt himself. This is because Jared rarely calls me. Funny how fast we can jump to conclusions. I digress. To my surprise the reason for the call was to discuss Payco traveling to his first exhibition. Jared wanted to get him out and accustomed to all the different sights and sounds of a competition without actually competing on him. This way he would be able to work him through any issues before he was handed back over to me.

So, on the weekend of October 22-24, 2021 Payco took a dip into the life of a mounted shooting horse. He took everything in stride and listened to Jared extremely well. I was impressed – and extremely excited.

On Friday, he was out and about watching and being ridden during shooting practice. He stood there quietly as horses around him came in and out of the pen. With each pattern that was shot, Payco continued to stand there quietly and just observed it all.

Saturday was his first exhibition. He exhibitioned twice and both his patterns were solid patterns for a new shooting horse. Payco listened to his cues about as well as can be expected of a three-year-old. He navigated his patterns with out running away from the gunfire.

A little over a week after returning home from his first shoot I was able to get my very first lesson on him since he’s been in training. I’m not going to lie, I was so nervous. I’m really anxious about if I might ruin the training he’s had.

I felt like an incompetent rider a couple of times during the lesson and was really frustrated with myself. Riding him is SO MUCH DIFFERENT than riding Buns. Their strides are different, their movement is different and their reaction time is different. It’s a humbling learning curve.

By the end we really started to get together. I was starting to figure out how he worked. I’ll be taking lessons on Payco once a week until he comes home in January and then after that I’m going to shoot for lessons twice a week until the futurity in September.

It’s going to be a crazy year bringing along a young horse, but if there’s any horse I have faith will do well and succeed, it’s the one I have, Payco. I’m excited for our future together and I’m excited to see what the next year will bring.