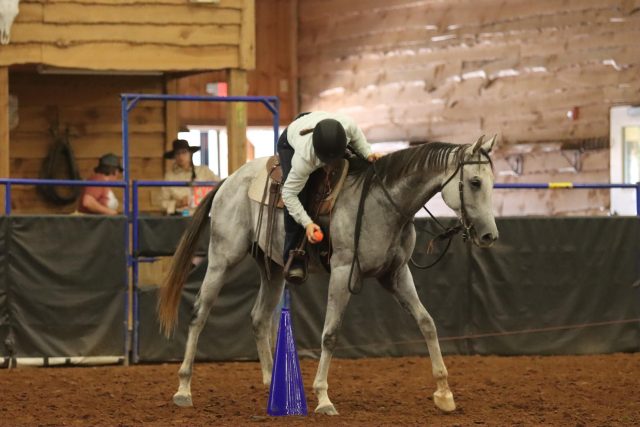 “I have used this event to set goals for myself and it has kept me on track to push for that 1% improvement every ride. I was struggling to even make time to ride prior to setting these goals. I want to express my gratitude for their commitment to such a noble cause — repurposing these animals who are filled with incredible hearts.”

The final Extreme Cowboy Race Luis (JC New Prince) completed this year was in Yadkinville, NC. We came in a day early, but I had been traveling for work earlier in the week, so we came in a bit reactive. I felt Luis’s heartbeat race when he heard a couple of coughs produced from an adorable miniature horse. It had been so quiet Luis hadn’t realized it was there for the first hour. I waited for his heart rate to lower and proceeded to continue getting familiar with the large indoor arena. There was no reason to get upset or bothered by his physiological reaction, just a little bit of worry in his cup and a reason for me to earn enough of his trust to empty it.

We raced in both the Novice and Intermediate divisions, trying to get as much exposure to obstacles under a competition atmosphere. I wanted to prepare both of us for this as it would be the same type of challenge we would experience at the Makeover. This was our last effort to prepare. To my own surprise (and joy), we were able to pick up and replace a tennis ball from a cone. I was skeptical whether it could be achieved, but even on a 16.2 h gelding, it was possible! From where we began and ended there was a drastic and improved difference, enough to receive multiple acknowledgements of “job well done” from spectators and fellow competitors. 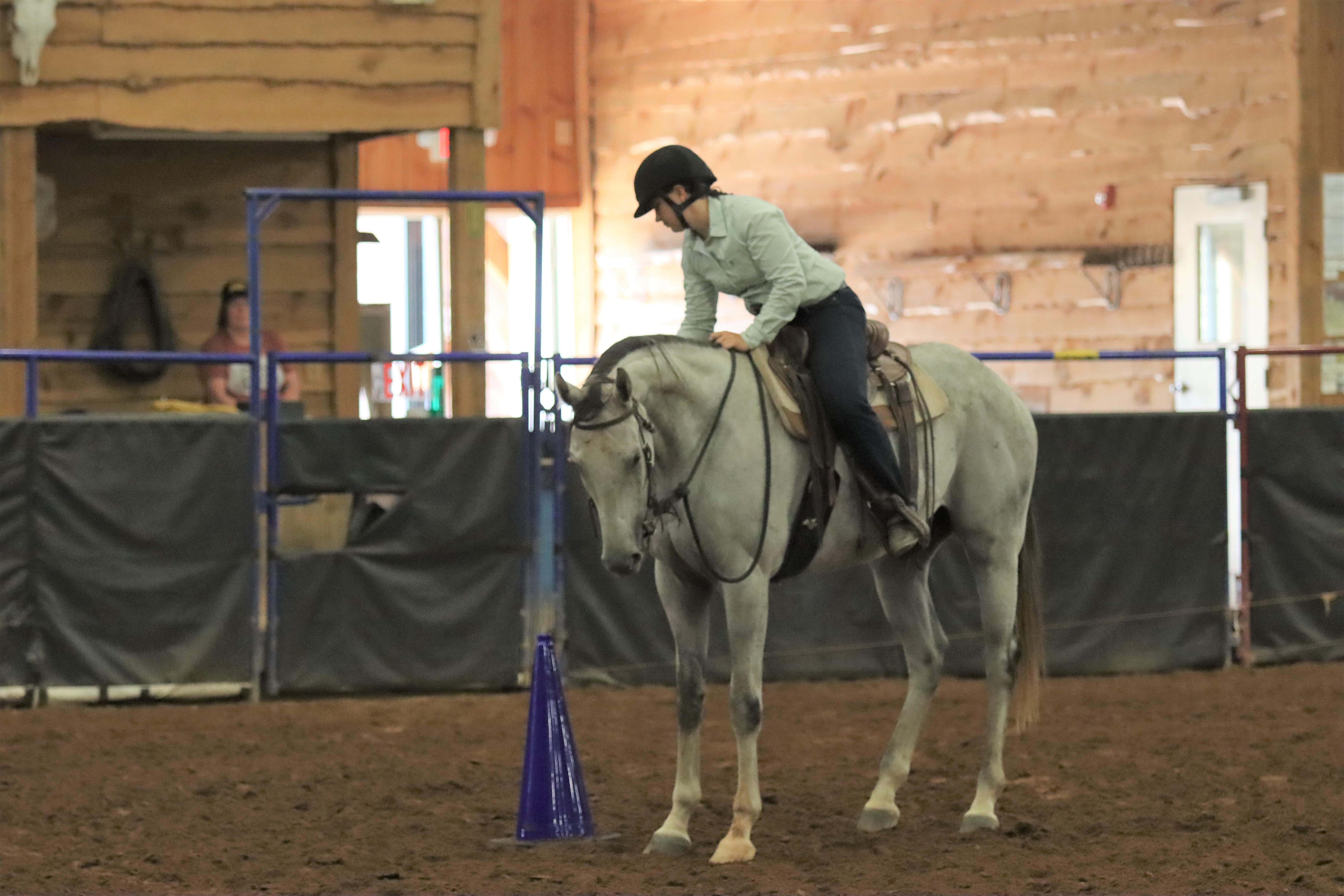 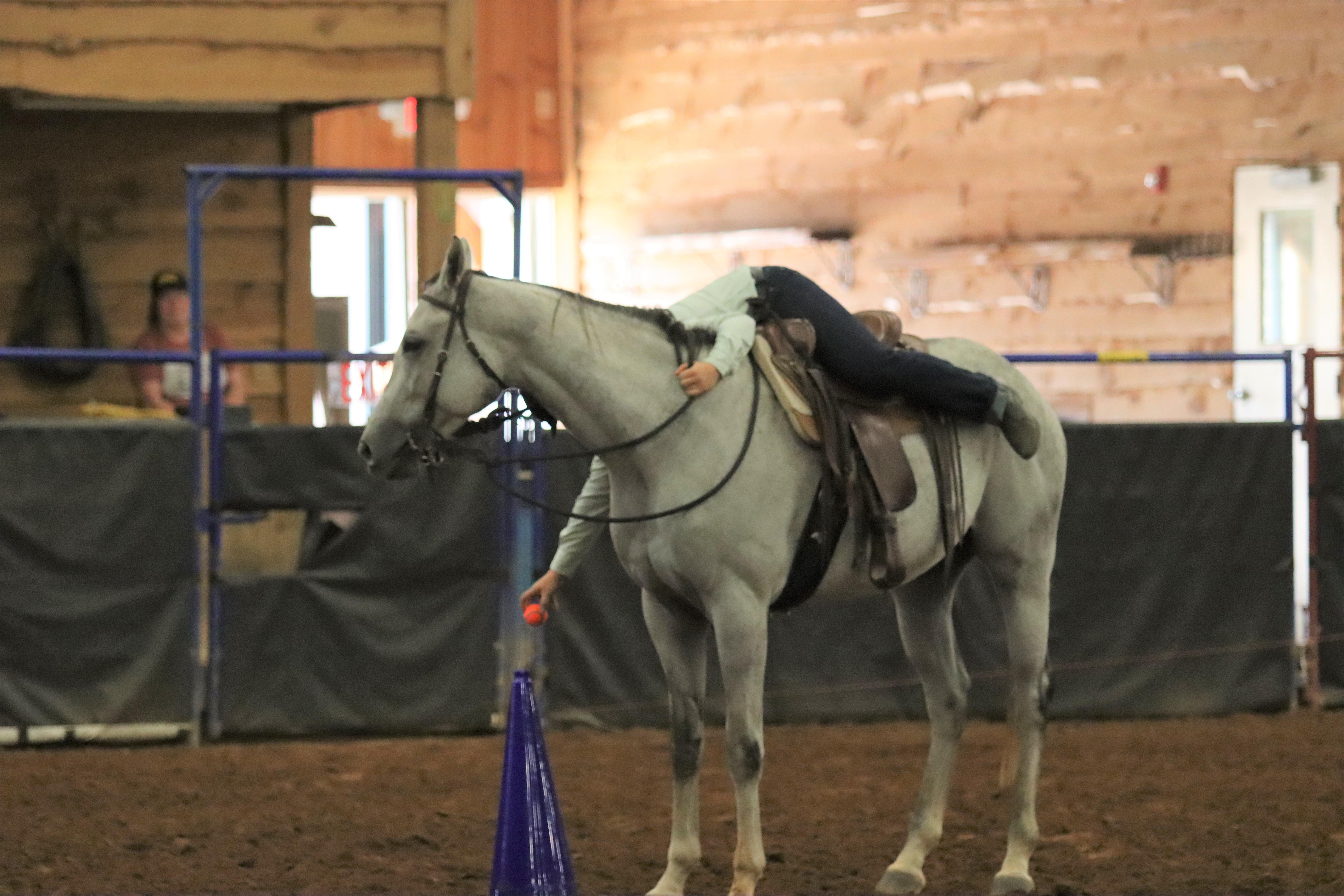 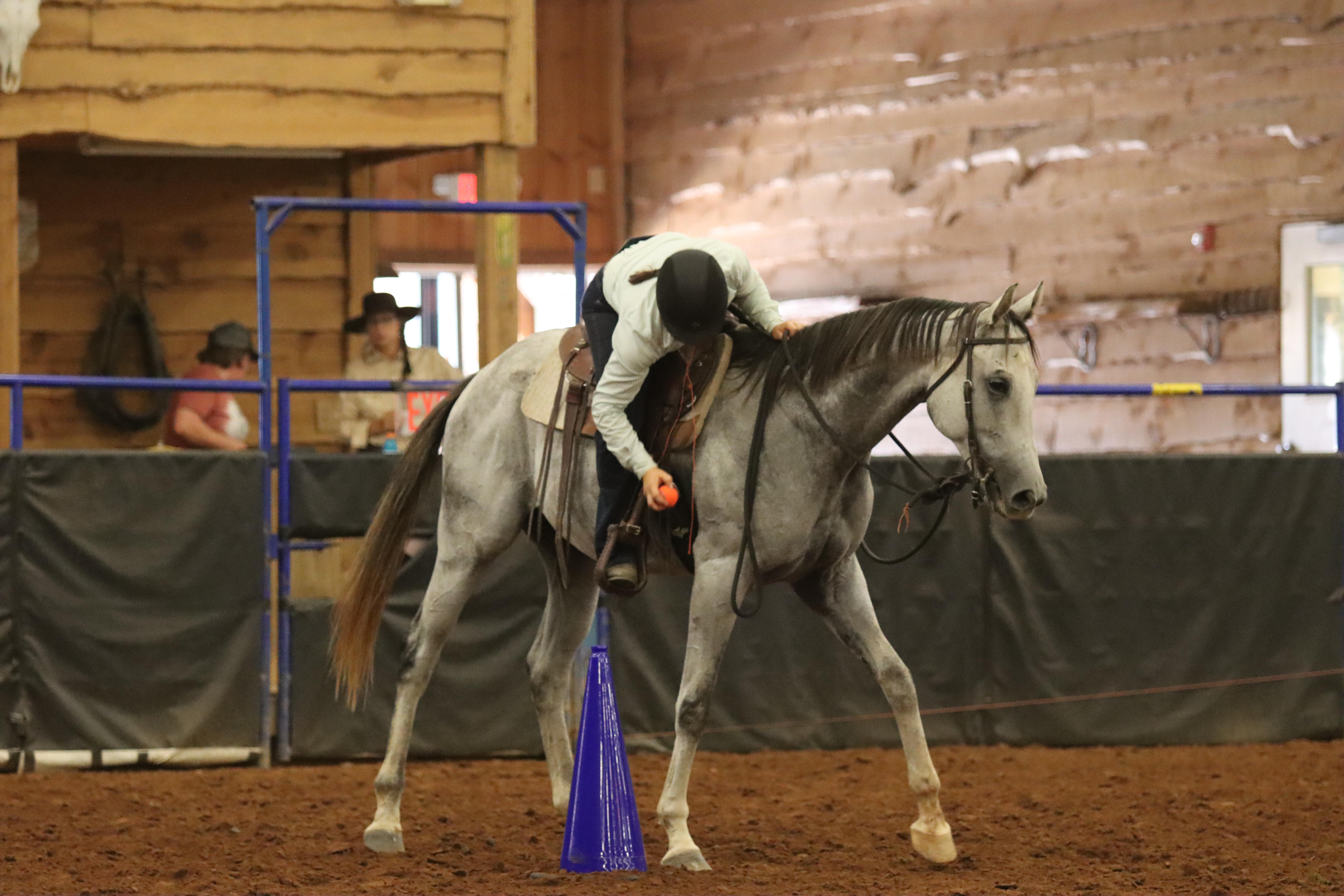 Patience, along with “feeling felt, being heard, and getting gotten” has been the way I have been able to start unlocking the greatness in Luis. I am a listener of Warwick Schiller’s The Journey On Podcast. Online I began doing some detective work to learn more about why this phrase was such an integral part of the puzzle to this horse. I found a video of him on YouTube spending time discussing horses with Sarah Schlote. I slowly unraveled Warwick content back to Dr. Daniel Seigel’s work. Lack of control makes any being feel powerless and without a voice, especially when it goes against their natural biology and instinct. There is some serious anxiety that can be associated when acknowledgment doesn’t occur.

This led me to question stall vices. How different is this from a human vice like drinking, smoking, etc.? As I acknowledge how Luis felt without judgement, I began to see his social, physical, and emotional needs being expressed. Then I was able to begin the process to meet them. His ability to communicate improved, as my awareness of details began to grow and his personality began to blossom. I was able to start meeting his needs before his head bobs started; they became less frequent. More normal behaviors emerged, like mutual grooming and less stress while in the barn (with the door open and having a choice to leave). Gradually I have, in short increments, begun re-conditioning Luis to the closed stall as we prepared for a week of stalled life at the Makeover.

I had to devise a plan to help Luis still feel heard while at the Kentucky Horse Park. I was late to the game in reserving a round pen, but Tammy Botsford kindly offered to share hers. Luis got to spend his nights outside surveying the beautiful grounds and maybe the wandering skunk or gaze of raccoons. This was expertly managed by our private Facebook chat group. We were able to rotate four horses through a 24 hour period. This is why I love TB Makeover competitors; they are kind, but also resourceful.

The evolution of emotion from year one to year two has been a great pivot. I sincerely thought I had let my 2019 graduate down with my poor riding. I beat myself up about my lack of fitness and not being very comfortable picking up objects while on horseback.

2021 has been a whole different emotional experience. There were some obvious improvements that could have been made, like spending as much time as possible with Luis in the indoor and not waiting until Monday night to finish sewing my costume for the Freestyle. This ride started well, but fell apart at the canter. I forgot to breathe and all the people watching were a bit much for Luis to overcome.

Competitive trail was a different story — I was present. I actually got a chance to enjoy the experience. It didn’t hurt that I was riding a horse that genuinely makes me smile ear to ear. I could have been really hard on myself, scoring a solid 10 points lower than on my 2019 competitive trail marks, just barely maintaining 16th place overall, even on a less complex test. But I am still ecstatic about our performance because I understand how the learning process works. There are bursts where you have major breakthroughs, and then hit a plateau. Then you work on improving what you learned and practice and earn some mastery. Then you are ready for that next burst of learning to achieve the next level. This has helped me with any frustration I have felt in the past, especially with the huge external goals I set for myself with barefoot trimming and bodywork. Just being okay with where I am at right now, and being with the horse in the moment has really influenced my training style.

I now realize, after my Freestyle performance, what a challenge it is to end up in the top five and having to perform that discipline within a large arena with a large screen, music and so many spectators. This reproduces so many of the factors these Thoroughbreds dealt with at the track. When all these stacked triggers meet it always included running. Training a horse for a discipline is one thing, but training for an incredible performance where a horse stays connected with you under high energy is a challenging request, even for the most seasoned horse and rider.

I don’t think Luis would have made the Makeover if it was held in 2020. I don’t think he would have been as successful without the year of let down and reflection. My 2019 Makeover graduate pushed on Luis in turn out daily and he just pushed right back like a statue. I joked Beau was helping me train him to move away from pressure. Later on Luis hit it off swimmingly with a 2016 chestnut mare and their companionship has really changed their relationship with life with a peaceful yet functional herd dynamic.

As we move into winter, I look forward to additional reflection on the past year and the memories and friendships made. I want to thank those responsible for dreaming up this incredible event where even an amateur can ride a Thoroughbred and be a part of the Sport of Kings. I have used this event to set goals for myself and it has kept me on track to push for that 1% improvement every ride. I was struggling to even make time to ride prior to setting these goals. I want to express my gratitude for their commitment to such a noble cause — repurposing these animals who are filled with incredible hearts.

Kate grew up in rural New Hampshire where she rode Morgans competitively until the age of 14. She worked at a small private farm caring for Norwegian Fjords and Morgans through high school, while also enjoying her personal horses. She attended Randolph-Macon Woman’s College and continued her equestrian journey by taking hunter/jumper equitation classes every semester for four years. After college, she discovered her love for the OTTB in 2014 when she purchased JC Trickish, her first mount that started her on the path to become a member of the Retired Racehorse Project. In 2019 she was a first time competitor with JC Somebody’s Beau. They earned Best Conditioned in Competitive Trail while also competing in Show Hunter, placing in the middle of a huge class of over 100 horses. Kate is looking forward to sharing her experiences preparing for the 2021 Mega Makeover with Luis ( JC New Prince). 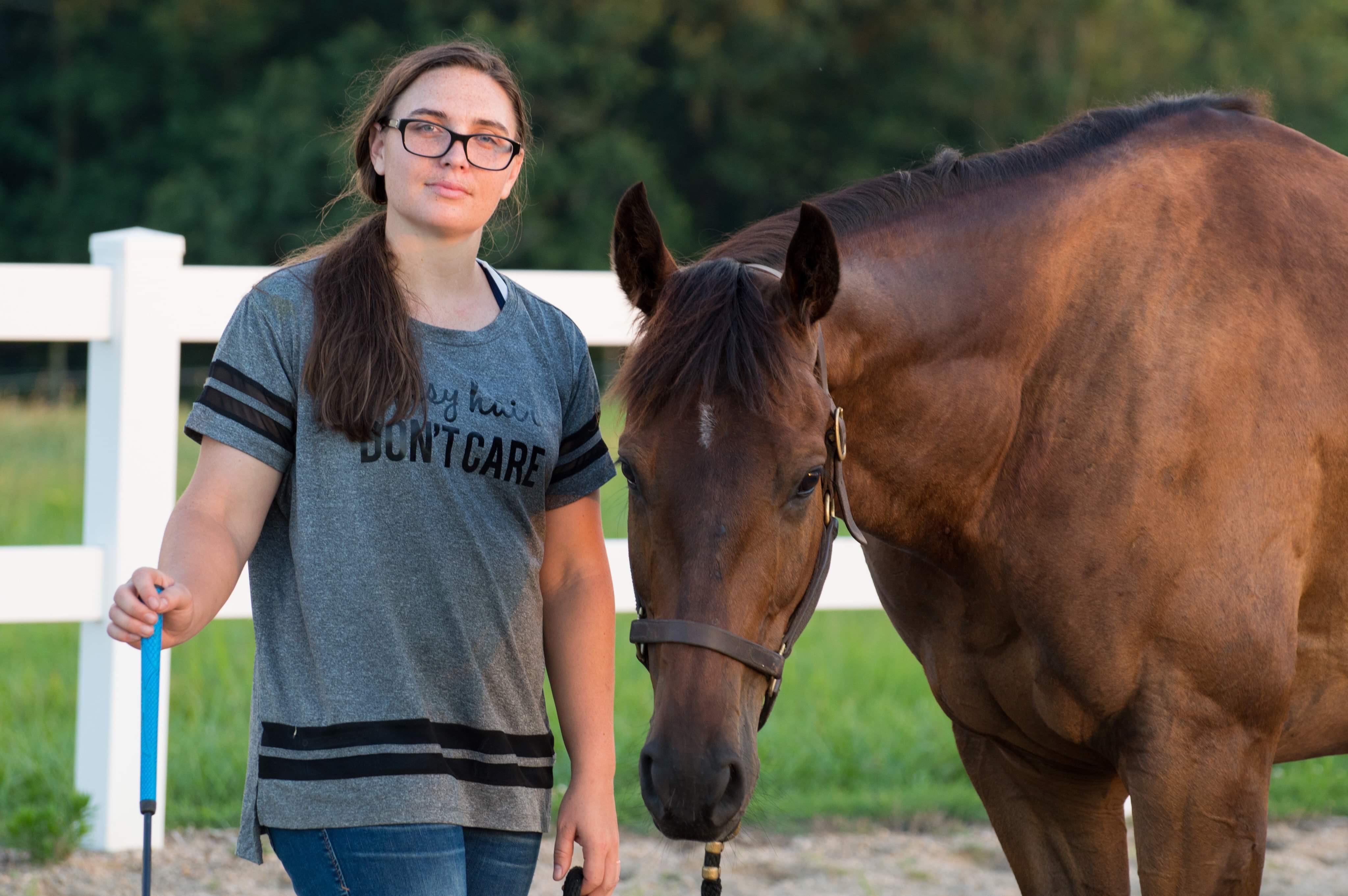