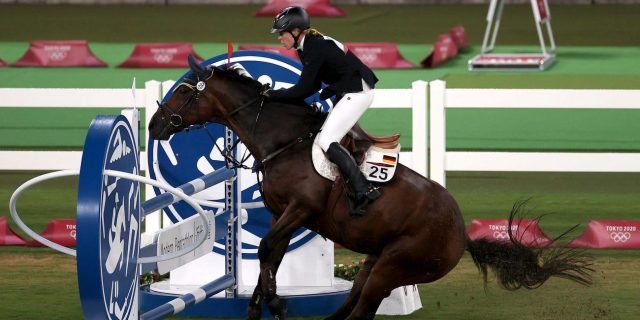 After much negative attention was brought to the relatively obscure sport in Tokyo, the modern pentathlon may be dropping show jumping.

The Olympics offers one of the largest venues for non-horse people to view various equestrian events to which they otherwise would not be exposed. Unfortunately, this large venue and wide audience can amplify displays of poor horsemanship. This was especially true during the Tokyo Olympics when the German pentathlete Annika Scheul left the arena in tears following a poor ride and her coach, Kim Raisner, was seen striking the horse.

Pentathlon originally dates back to Ancient Greece and was part of the Ancient Olympic Games. The five events were contested over one day for the, starting with the long jump, javelin throwing, and discus throwing, followed by the stadion (a short foot race) and wrestling. The modern pentathlon is 109 years old, and was established as a way to help cavalry riders to develop the skills needed to survive behind enemy lines. The modern version of the sport features five events: fencing (one-touch épée), freestyle swimming (200 m), show jumping (15 jumps), and a final combined event of pistol shooting and cross country running (3200 m).

However, the make up of the sport may be facing a change before the Paris Olympics. Multiple reports indicate that Union Internationale de Pentathlon Moderne’s (the modern pentathlon’s governing body) has held a secret vote in order to remove show jumping from the sport. This move comes in the wake of Scheul’s ride and reports of Raisner’s behavior toward the horse.

Pictures of Saint Boy, the horse, refusing the fence and reports of Raisner’s treatment of the horse following the event made global headlines and brought negative attention to the relatively obscure event. The UIPM is reported to have made its decision in an effort to preserve the modern pentathlon in the lead up to the Paris 2024 Olympics.

This decision has not been announced officially, but some athletes already are pushing back against the proposed change. According to the Guardian, former British modern pentathlete Kate Allenby, who won a bronze for Team GB at the Sydney Olympics, indicated that any move to replace riding would be a “disaster” for the sport. She said, “This needs talking about because it’s not modern pentathlon if it hasn’t got riding in it.”

Not all competitors feel the same. Greg Whyte, another British competitor who also won a world silver medal in 1994, said he could understand the change: “I don’t think it is necessarily a bad thing,” he said. “Back in the day, the fencing part alone used to take 14 hours, while in Paris the whole event will last just 90 minutes. All sports evolve, and no sport is immune from change in the modern TV era.”

The UIPM has not been available for comment. There are some indications that cycling may replace show jumping, but those reports are unconfirmed. However, the organization the has released a statement, saying “As part of UIPM’s commitment to maintaining a strong, dynamic profile for modern pentathlon, a series of strategic meetings are being held. These meetings will include an upcoming call with national federations later this week. The outcome of these meetings will be detailed in a press release to be published on 4 November.”