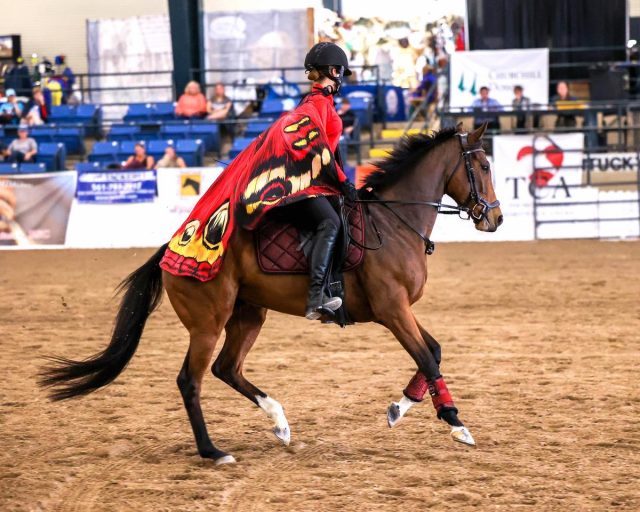 Two weeks after the Mega Mageover, Britany looks back on her experience at the Kentucky Horse Park. Her biggest takeaway? Community.

Two weeks later, as I’m processing the experience that was the Mega Makeover, what I will remember most is the community. So I’ll take this opportunity to call out some extraordinary people and horses who embody what this competition is all about. This is also just the view from my small corner of the stabling, but I hope a good representation of the hearts and efforts of the 500+ incredible people and horses that joined together in celebration of the Thoroughbred at the Kentucky Horse Park this year, and the incredible staff and volunteers who supported it.

It is unlike any show I’ve ever been to. You’re not up against “made” horses, everyone is in the same boat and when a youngster spooks or makes a mistake, it’s met with humor and understanding. We are each there to support our horse, and everyone was there to support each other.

It was fitting that the first person I ran into that week was none other than Meghan McNamara. She and I started to converse via Facebook for two months beforehand, sharing notes and preparatory tidbits. As we pulled into the parking lot, my travel partner and friend, Autumn Sorenson, points toward the arena and says, “Isn’t that your friend?” (I’d already shared that Pied, Meghan’s horse, has a splash of roan across her left side and she recognized her instantly.) No sooner had I hopped out of the truck and shouted Meghan’s name than she was leaping from Pied’s back and barreling at me for a hug. (I’ll note here, that the week both began and ended the same way — more on that later.) Suffice it to say that she was exactly what I expected, as were the friends and family that came with her. Throughout the week, they would take me under their wing and help with a variety of things, from Meghan’s friend Dianne, setting the tarp for my freestyle performance and then handing me a margarita while we waited for scores to be finalized after, to the family having me over for dinner and letting me do my laundry. 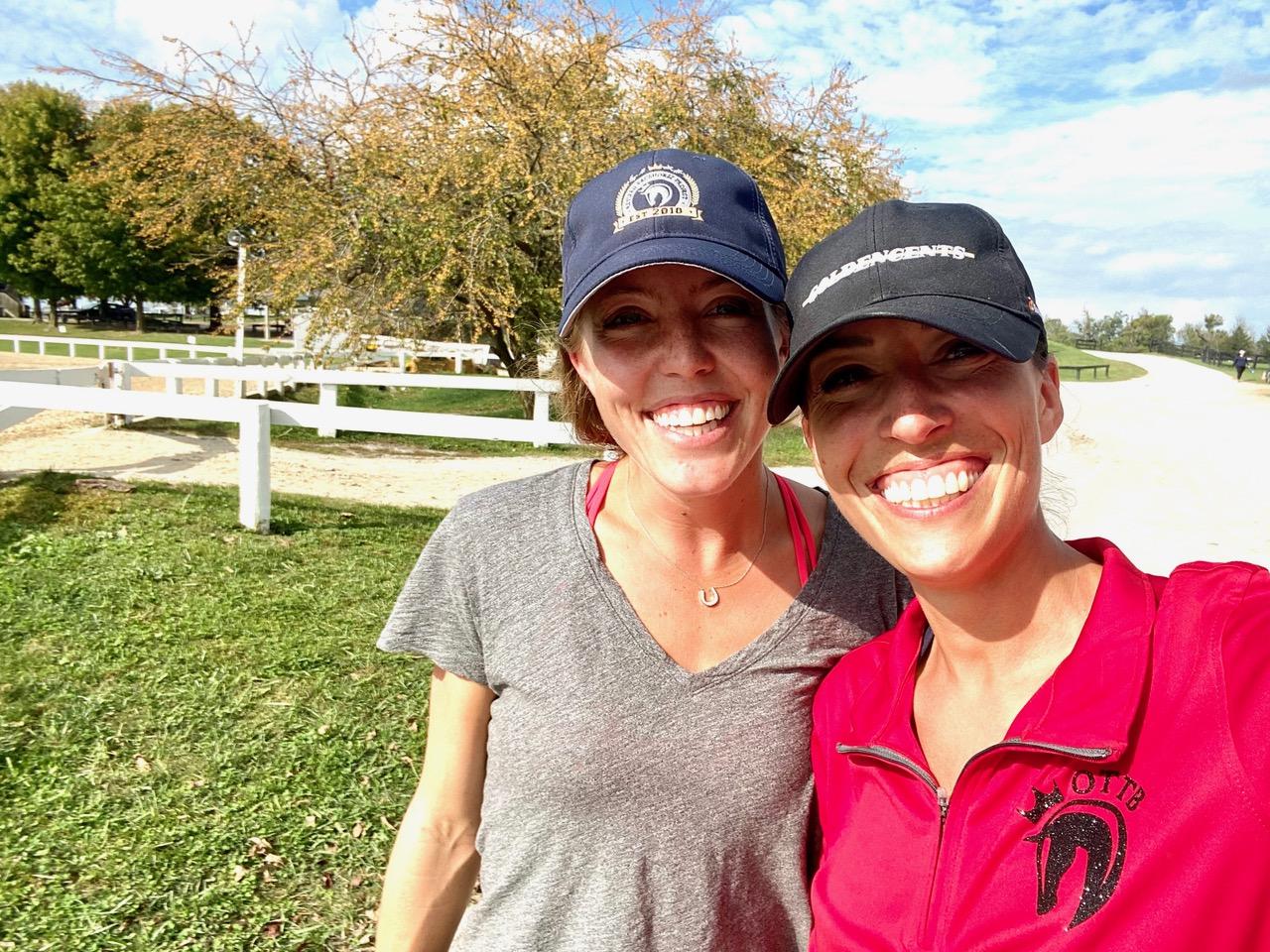 Britany and Meghan right after learning that Meghan made it to the Finale with a 3rd in the preliminary freestyle. Photo by Britany Chism.

Autumn Sorenson, my aforementioned friend, also made this trip a memorable one. Let’s start with the fact that just six weeks go she was still unsure if she’d be able to go, because her horse, Thistle, had spent the entire summer rehabbing a bowed tendon. Once certain she was ready, Autumn ran her at two trials just before leaving, confirming their partnership was solid as ever, and loaded her up on the rig for Kentucky. Good thing she did too — the two gave a stellar performance, putting them in 2nd in Field Hunters at the end of the preliminaries, and therefore in the Finale. This was a placing that the unassuming Autumn had never expected to be in, but especially because Thistle had only just come back to work. Such is the extraordinary nature of the Thoroughbred.

My own spicy mare was also a force to be reckoned with. We competed in the single largest field of any discipline of the week — one of 86 entries for the 2021 Dressage group — and Freestyle (*not* a dressage freestyle, but a unique division where we could show off our horse’s abilities outside of the other nine disciplines represented, which spanned the English varieties as well as competitive trail, ranch work, barrel racing, and polo.). The creatives in this group opted for everything from liberty work (my performance of choice) to reining and jousting.

At four, JC Itybityquikasakity was one of the youngest horses and going into it I knew we’d be up against professionals with horses both more mature and further along, but that’s the interesting thing about the Makeover… they’re judging on one’s future potential for sport and not necessarily the finished product. There is room for mistakes, and certainly for nerves. How refreshing!

At the Kentucky Horse Park everything is on a grand scale, the largest of which is the Rolex Stadium where we performed our dressage test and demo (like a dressage freestyle without music). While we had schooled the day before, Kittie was still a bundle of nerves walking down the ramp into Rolex. Our hour-long warmup with my coach, Ashley Horowitz, shouting at me to “send it!” (ride super forward), had worked wonders, but I still had a mildly tense OTTB, and that was okay.

As we left the arena after our first test, the judge, impressed by Kittie’s “forward-thinking,” chuckled and suggested that maybe I had a future Eventer on my hands. That’s the plan! It was with these words that Ashley’s sage wisdom finally landed.

I relaxed, and so did Kittie. She hit her groove as we entered the second ring for our demo 10 minutes later and danced with me. Never have I had so much fun in a dressage ring! And our score reflected it — while our test was good, our demo was one of the highest scores all day (only nine others achieving that score or higher), and of that field of 86, we finished 18th overall, and 3rd placed amateur.

A focused Kittie at the canter; photo credit: Canter Clix. Trotting in our dressage demo, with my ever-supportive husband, Kyle Chism, videoing our ride in the background. Photos by Canter Clix.

The nerves would resurface for our Freestyle in the Covered Arena — think banners on every surface, a Jumbotron, and loads of people — and Kittie went in with her head on a swivel. 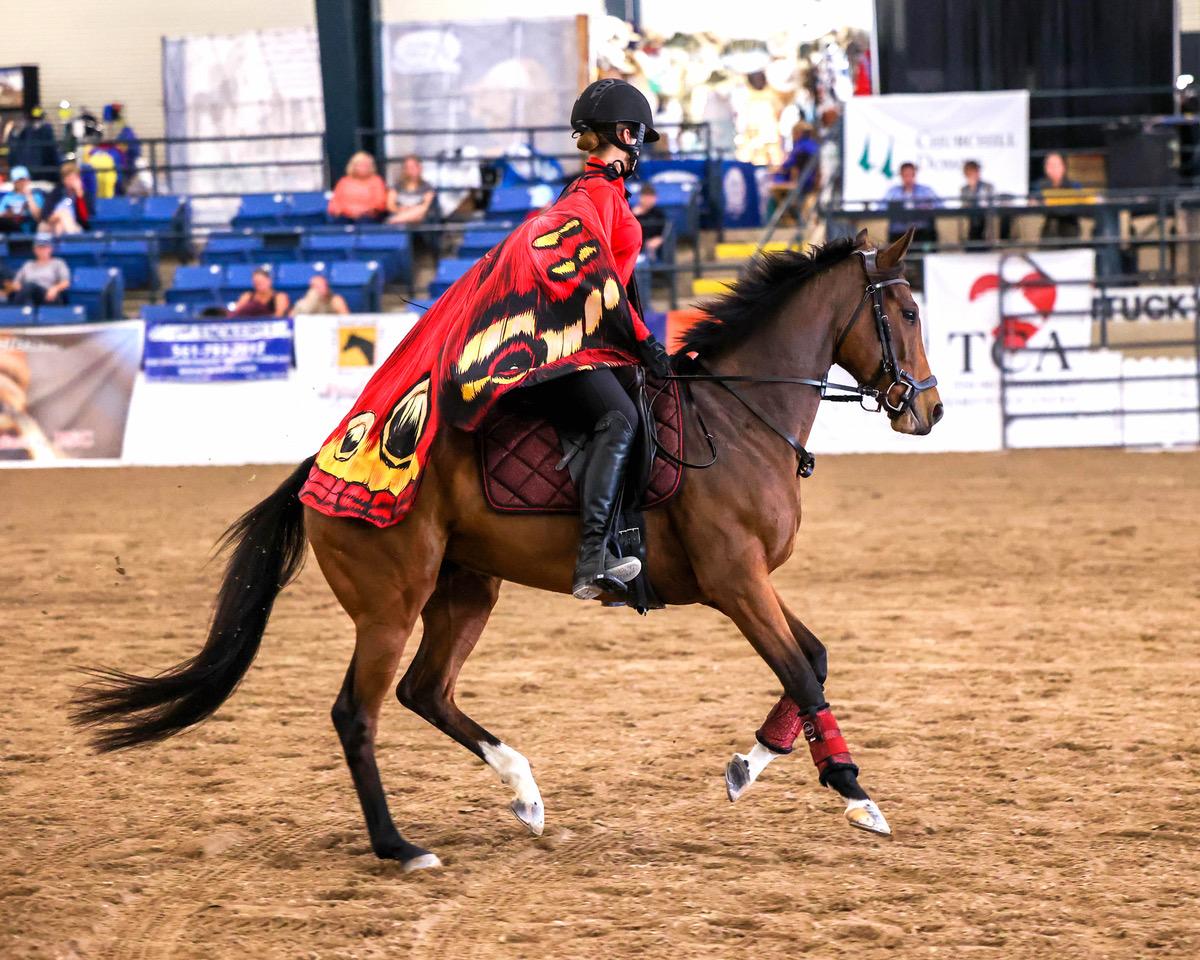 A nervous but obedient Kittie at the beginning of our freestyle. Photo by Canter Clix.

Comments on our scorecard later revealed a judge who perfectly understood my youngster: “tough environment for a sensitive horse.” Sensitive indeed — about halfway through, recognizing how nervous Kittie was, I stopped, put my hands on her and took a deep breath. She did too, and like in Rolex the day before, dropped her head and chose to stay with me for what remained of our liberty routine, including floating a tarp off her back. We finished in the ribbons in 9th place, and again placed 3rd amateur. Better yet, she was the highest placed 2021 horse that had raced at Arapahoe Park, and so we came away with that award too.

Starting to settle for the latter half of our liberty routine. She could have turned tail and run at any point, but chose to stay with me instead. Photo by Canter Clix.

As for my friends, they finished remarkably well. Autumn and Thistle gave a beautiful round in the 2020 Finale, finishing 2nd overall in the Field Hunters and 2nd placed amateur, as well as tying with Brit Vegas and Mr. Park for the 2020 Arapahoe Park award. 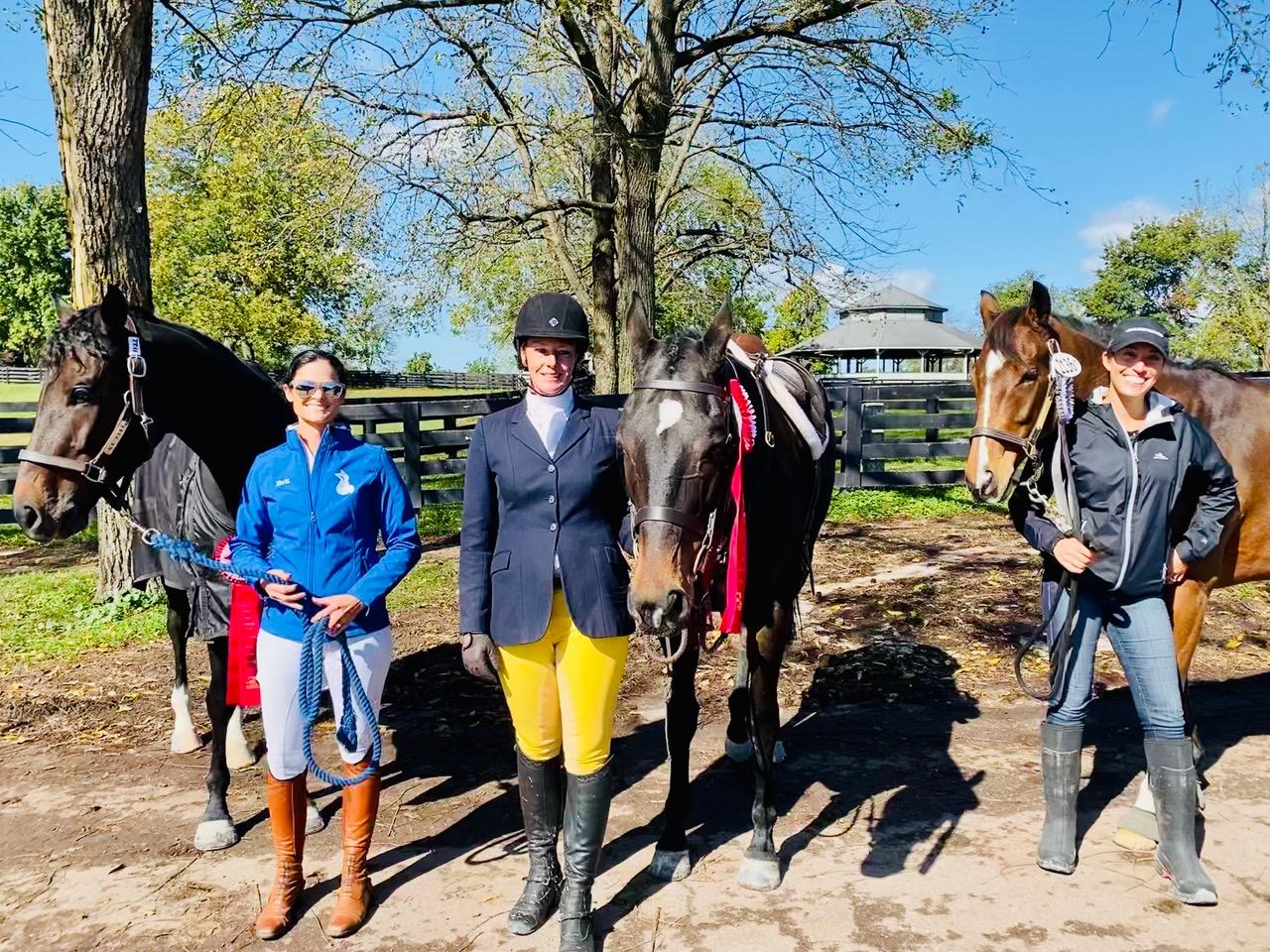 The three winners of the Arapahoe Park award – from left to right, tied for 2020, Brit Vegas and Mr. Park, and Autumn Sorenson and Ms. Battlefield, and for 2021, me and Itybityquikasakity. Photo by Ashley Horowitz.

Back to my side note earlier about our week ending much as it started…I received a text from Meghan shortly after she and Pied participated in the 2021 Finale Jogs for their top 3 placing for their preliminary Freestyle.

Pied did not pass the jog and they wouldn’t compete in the finals. It was my turn to come running for a hug. It’s devastating to come so far and not be able to finish, but Meghan took it in stride with grace. We later learned that the jog vet was blown away by how she handled the let down. I, on the other hand, was not surprised at all. As far as Meghan was concerned, Pied owed her nothing and had already accomplished miracles. Not being allowed to add any finale points to her score, her 3rd place was transmuted to a 5th, and she finished 2nd placed amateur. She also finished 11th in Ranch Work, and 3rd placed amateur in that division as well. 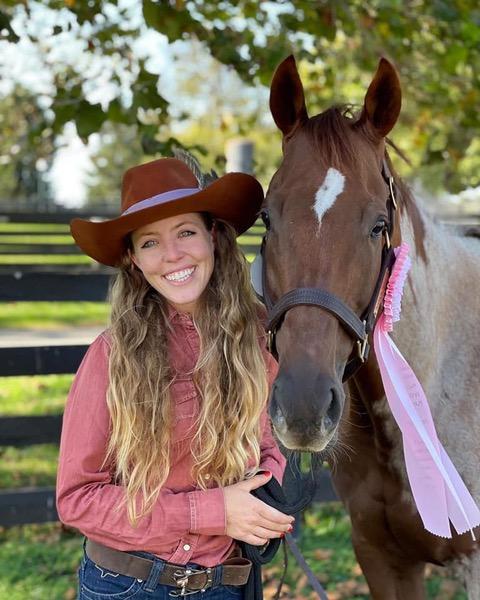 Meghan and Pied with their 5th Place in Freestyle. Photo by Dawn Mellen.

The glue through all of this was a wonderful couple who I happen to call friends, Ashley and Jonathan Horowitz. Ashley coached the riders mentioned above, somehow running between warmups, playing personal videographer, and generally keeping our heads on straight.

Jonathan is an announcer at racetracks across the country (even announcing Kittie’s singular win), and he and Ashley both announce at the Makeover and share incredible stories throughout the week — the stories of horses and riders who shouldn’t have made it to the Makeover, but did, and of the talent of horses who made millions on the track, and those that didn’t, that go on to demonstrate that their talent doesn’t end there.

Now, as I close out my final post for this Horse Nation series, I fully understand the sentiments I heard at the beginning of my inclusion into the Makeover community: THIS IS ONLY THE BEGINNING. Not just for these incredible horses, but for the friendships made, and the future achievements that now seem that much closer.

So it was with these thoughts that we rolled out shortly after Autumn’s victory gallop — our horses having blown away any expectations we could have had — to get Autumn home in time for opening hunt a short 24 hours later.

After some well-deserved vacation, Kittie and I will be making a run for our USDF Bronze Medal, and eventually hope to compete in upper level eventing. If you’d like to follow along on our journey on the day to day, follow our Facebook page.