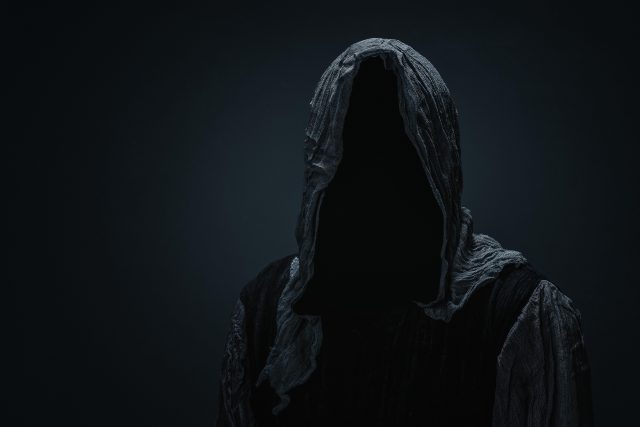 October 28, 2021DeAnn SloanReader Submission#HALLOWEENComments Off on Trail Ride From Hell

Bailey Thers tells a tale of trail ride none of us would want to experience.

The rolling hills of Aiken, South Carolina were coated with a dense fog that seemed to settle right before dawn. The crispness of the air was unsettling, as it was much more frigid this morning than it had been the days before. Jessica was riding her first horse of the morning, a Dutch Warmblood gelding named Theo, whom she had only started training about six weeks before, but the big hunky boy had proven himself a solid and reliable mount. She could rest assured that Theo would not let the newly frosty temperature make him cold backed or spooky. Although this was a new mount for Jessica, the guy had been around the block. The 10 year old had shown at many Grand Prix jumper shows, and had even dabbled a bit in Dressage. He had ended his show career because, for some unknown reason, Theo had started refusing jumps. Sadly, his previous owner had no limit to his funds, and instead of diagnosing the problem, he sent Theo away to be sold quickly at an auction and purchased a new horse destined to be used and abused. Some people treat their animals like machines, and Descartes would be proud of this one in particular.

So, Theo found himself at a kill-pen. Word quickly reached Jessica, who was known as something of a local phenomenon: a horse whisperer. When someone was afraid of their animal, well, let’s just say the horse would be lucky to find their way to Jess’s barn as opposed to the same kill-pen just down the road where Theo was found by his angel.

Jess rode Theo along the fence line. The two quickly formed a bond, and they worked well together. She could hear his hooves crunch down on the thick layer of dead leaves that bordered the fence line. The tingling ache of cold crept slowly into her boots. Jess wiggled her toes, trying to bring the warm gush of fresh blood back into circulation. Her fingers started to get cold too, so she bridged her reins and stuffed her free hand into one of the pockets of her canvas Carhartt jacket. As the trail started to drop elevation into a holler, the mercury also began to plummet. It must have dropped 15 degrees when she reached the lowest point. It was much, much darker down there; no sunshine could possibly reach the low point, so Jessica’s eyes had to adjust. She looked up, the rays of sunlight passed above and almost seemed to intentionally dodge this piece of earth.

A strong chill travelled down her spine when she heard a branch behind her snap. Theo pricked and swiveled his ears. They halted dead square in their tracks. She turned around and saw a figure laying on the ground. It seemed to be twitching slightly but in a rigid type way. She immediately thought it must be a deer struggling through its last moments on earth. But she couldn’t tear her eyes away. Theo stood erect ready to go into flight mode, but she knew he wouldn’t move until she gave the cue. Jess gave him the signal for turn on the forehand until they were facing the strange sight. The two stood in silence, just watching. Slowly the dark figure jutted out a straight appendage, about six inches above the ground, and held a crooked digit, which was aimed straight towards the horse and rider duo. Jess thought that they had stayed put for more than enough time, and Theo obviously felt the same. Both horse and rider turned on a dime and high-tailed it back to the barn at a flat out gallop.

When they reached the light gray, six-horse stone stable she hastily pulled out her cellphone to call for help, but there was absolutely no service. Theo was huffing and puffing from the run, so Jess untacked the slightly damp gelding, fit him with a waffle knit cooler and put him in his stall. She knew that she could get service from on top of the hill next to the barn where the outdoor arena was. She didn’t even have time to take off her helmet, she just knew that she needed to call 9-1-1 as soon as she possibly could. The hill was a steep incline and she was already exhausted, but she trudged up the hill using what seemed like her last breathe. The last few steps felt like they took forever, but she finally made it to the sandy arena. Jess pulled out her phone and tapped the screen but nothing happened; the creep was dark. Pure and utter shock ran through her as a chill ran straight down her spine again. She looked up and all around her.

The closest neighbor was about five miles to the east as the crow flies. She could get there in her old Ford Bronco in about eight minutes. But what would she even tell the authorities? She saw a ghoul, a ghost, a demon? What even was the thing? Not human, no human would make those jerky movements… but the finger… no other creature has digits like that. She was trying to decide what to do when something caught her attention out of the corner of her eye. A quick, jolting movement close to the ground. Whatever it was scurried over the edge of the arena, on the far side to the right. By the time she turned her head it was gone, but she knew it was still close because she could feel something watching her.

Up on this hill, Jess was exposed. There was literally nowhere to run, except back to the barn. Suddenly a black figure that looked like an arm and hand raised over the edge of the arena directly in front of Jess and slammed down into the sandy footing. She was 60 meters away from the wretched figure. She wanted to run but was completely frozen in shock. A leg then appeared, except it looked like it was bent at the knee backwards. Then she saw it. The face slowly rose over the edge, cocked so far to the left that it was tilted over 180 degrees on its axis with the mouth raised above the eyes and nose.

All Jess could think about was a tandem event in her childhood when she was about six and got lost at the local Lakewood Mall. She felt so alone and scared back then, and in this moment she was no longer in the arena, she was standing in the mall, as scared as she had been so many years ago looking for her mother. No one was around. No one except this dark, formidable figure. Jess was petrified. But she still couldn’t move. She watched as the thing jolted forward, rigid and arachnid in nature. It was moving on all four hands and feet with the head turned disturbingly to the side. It was fast as hell, too. When it was right in front of her, it rose to its feet in jolting movements. With each movement, Jess heard all of the joints and bones crack into place. The sounds made her sick to her stomach. The last “crack” popped the skull into its place at the top of the spine.

Jessica was now looking up at a seven foot tall hooded creature. The eyes were black holes filled with limitless depth. The mouth was a thin, unmoving black line. When the creature opened its mouth a shrill shriek escaped. It was deafening. Jess closed her eyes as tight as she could, wishing it could all be over. The scream rang in her ears and she kept her eyes clammed shut as tightly as she could. She gasped as she felt her body fall backwards. On and on she fell, and on and on she heard the scream until she realized it was her own screaming and suddenly stopped. She finally opened her eyes and found she was in her own bed drenched in sweat. Jess jumped up and ran to the big bay window next to her bookshelf on the far side of her room. It was just a dream. Jess took a deep breathe, walked back across her room and sat on the foot of her bed.

After a few seconds she looked down at her feet. There, beside them was that same cinder colored, pitch black hand. She tightly shut her eyes again and screamed as loud as she could.