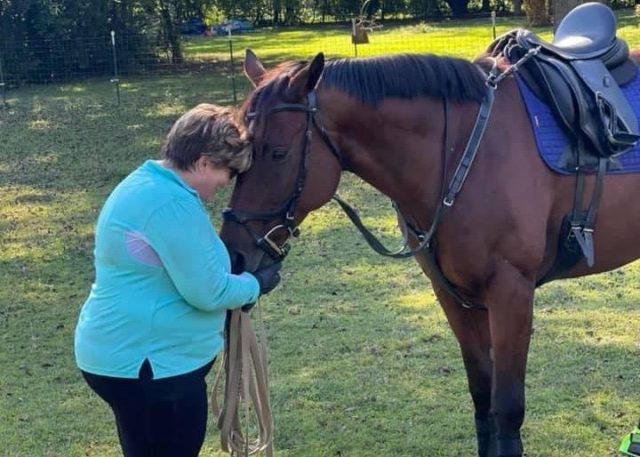 October 7, 2021DeAnn SloanContributor#RETIRED RACEHORSE PROJECTComments Off on The Death of a Dream: Libby & Spider

“I wanted to be one of the cool kids that actually made it there, even if we were not prepared to show. I have a color-coded schedule of where to be when, and what cool things we would see. Pushing ‘submit’ on his withdrawal last week was really, really hard.”

Following the announcement that the Retired Racehorse Project‘s 2020 Thoroughbred Makeover and National Symposium, presented by Thoroughbred Charities of America, will be postponed to 2021, competitors have been working to decide what comes next for them and their mounts. Today, blogger Libby Henderson talks about making the decision NOT to attend the Makeover.

The death of a dream. Sounds super dramatic, doesn’t it? Especially in this time of COVID – it feels insensitive to be taking this so hard. A co-worker with whom I’m close lost her husband suddenly to COVID-19 last month, and close family friends lost a son after five heartbreaking weeks on a ventilator – and here I am, heartbroken about having to withdraw from a horse show. I feel ridiculous.

Nevertheless, I’m in tears for what feels like the hundredth time since last Saturday morning. Around 6 am that morning, I was discussing with my husband the plans for the trip home from Kentucky. I have work travel recently scheduled immediately following my planned return and I questioned whether I could make it all happen. I know I am not as young as I used to be, when I could come in from a horse show at midnight and be up bright and early at work the following morning. My last work trip with two eight hour drives back to back sidelined me from all but basic functions for four days when I got home.

A week in Kentucky is do-able, especially if I have a couple of recovery days when I return home. But the long (10+ hour) drive home with the truck and trailer by myself, followed by an immediate trip out of town for something where I need to be fully present? I was starting to panic. And leaving for Kentucky was still two weeks away. 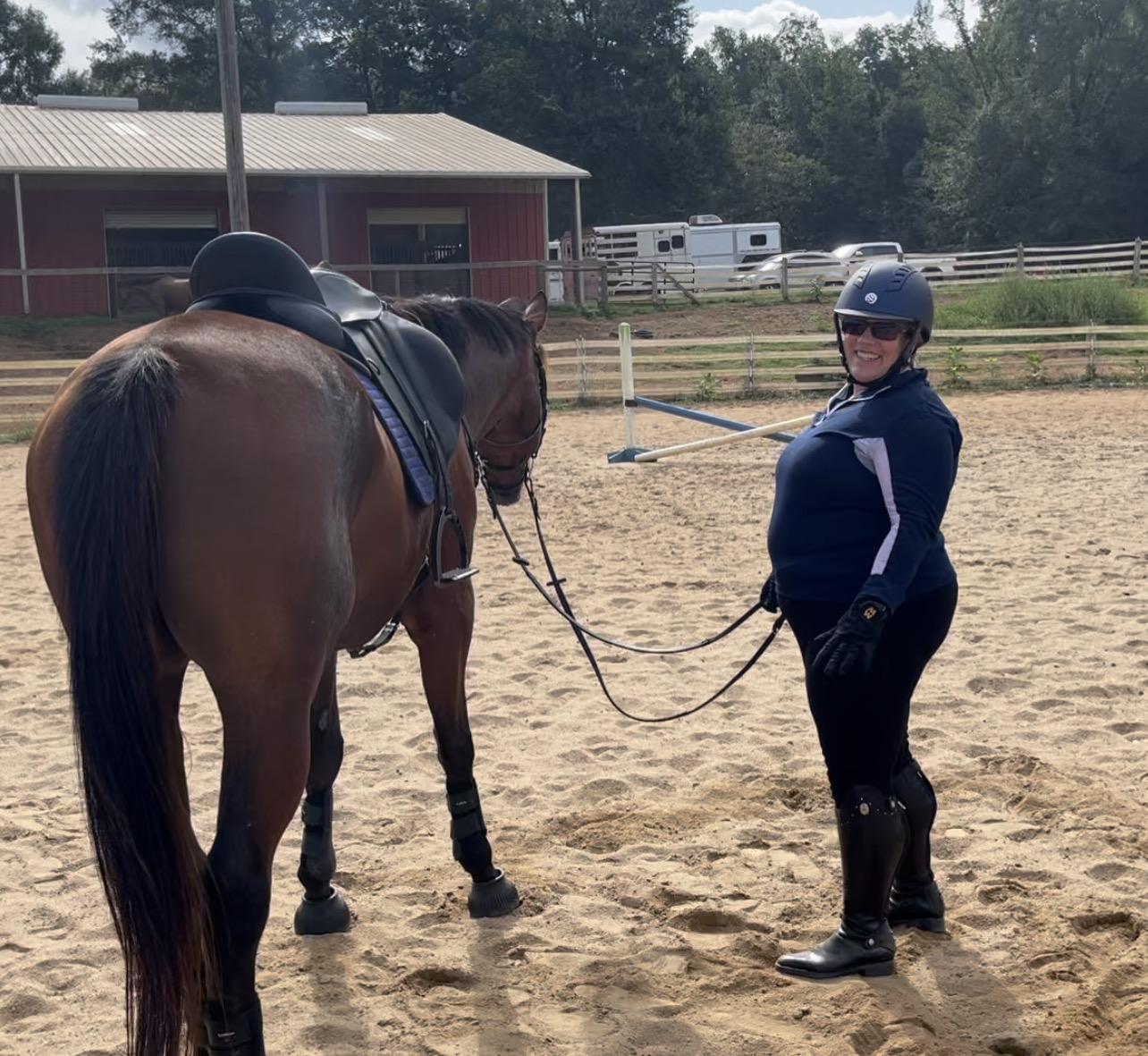 Me and Spider. Photo by Kristina Littlejohn. 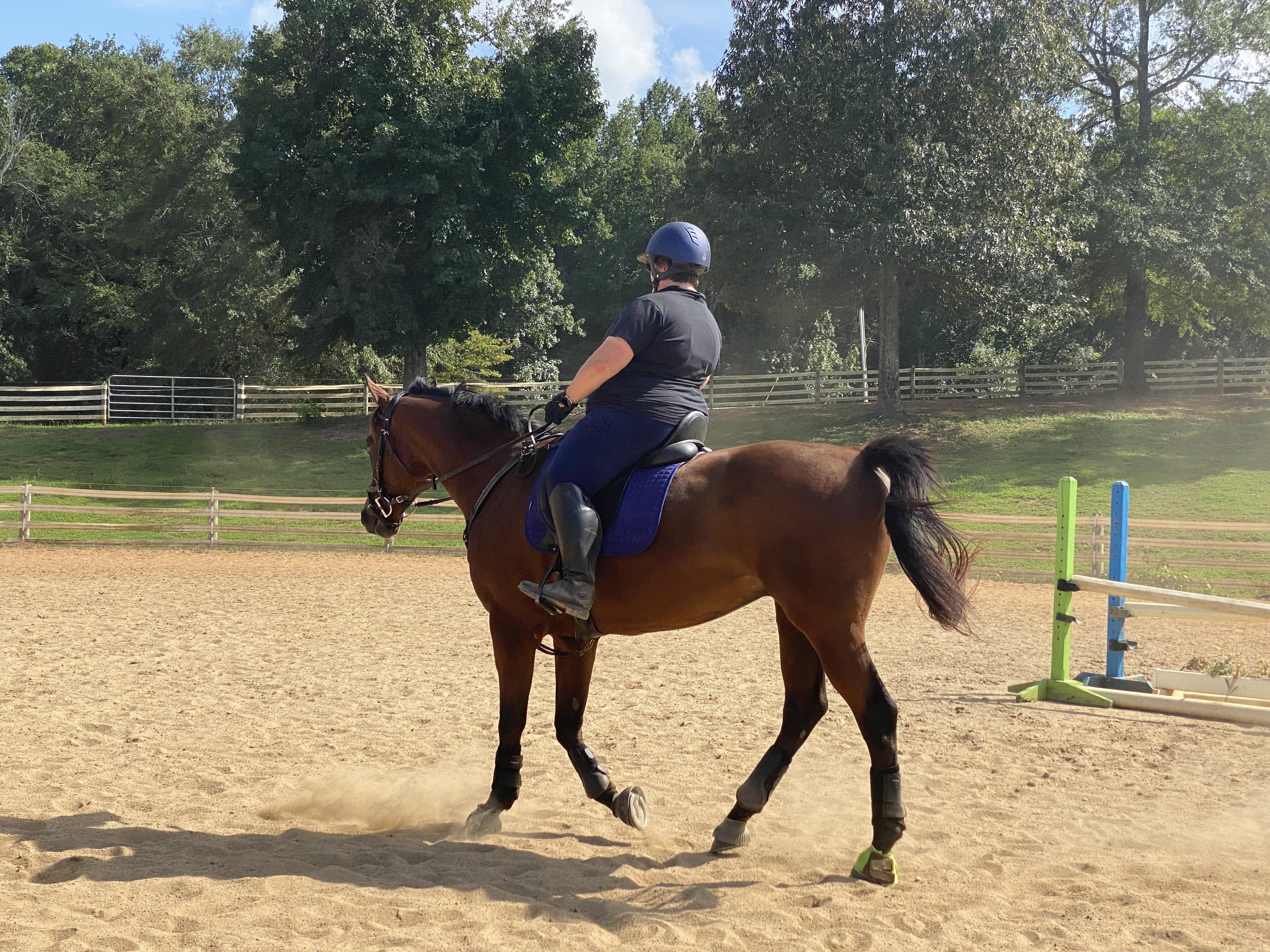 Me on Spider at A.P. Graham’s. Photo by Kristina Littlejohn.

We had a tough family discussion. There was sobbing, and more than a little yelling. My ever-practical spouse pointed out that a trip like that, with all that could go wrong, was ludicrous to even consider when combined with the issues we have with Spider. As you may remember, back in January, he injured his hind suspensories. The damage appears chronic and will always be something we have to keep an eye on. He has recovered as well as can be expected, but his rehab was not controlled and perfect as prescribed. Mostly, I applied the treatment of benign neglect. We have put him back to work, and a trip to fellow HN Blogger A.P. Graham’s farm in late August was amazing. He went well even for me, and I came home feeling super positive. 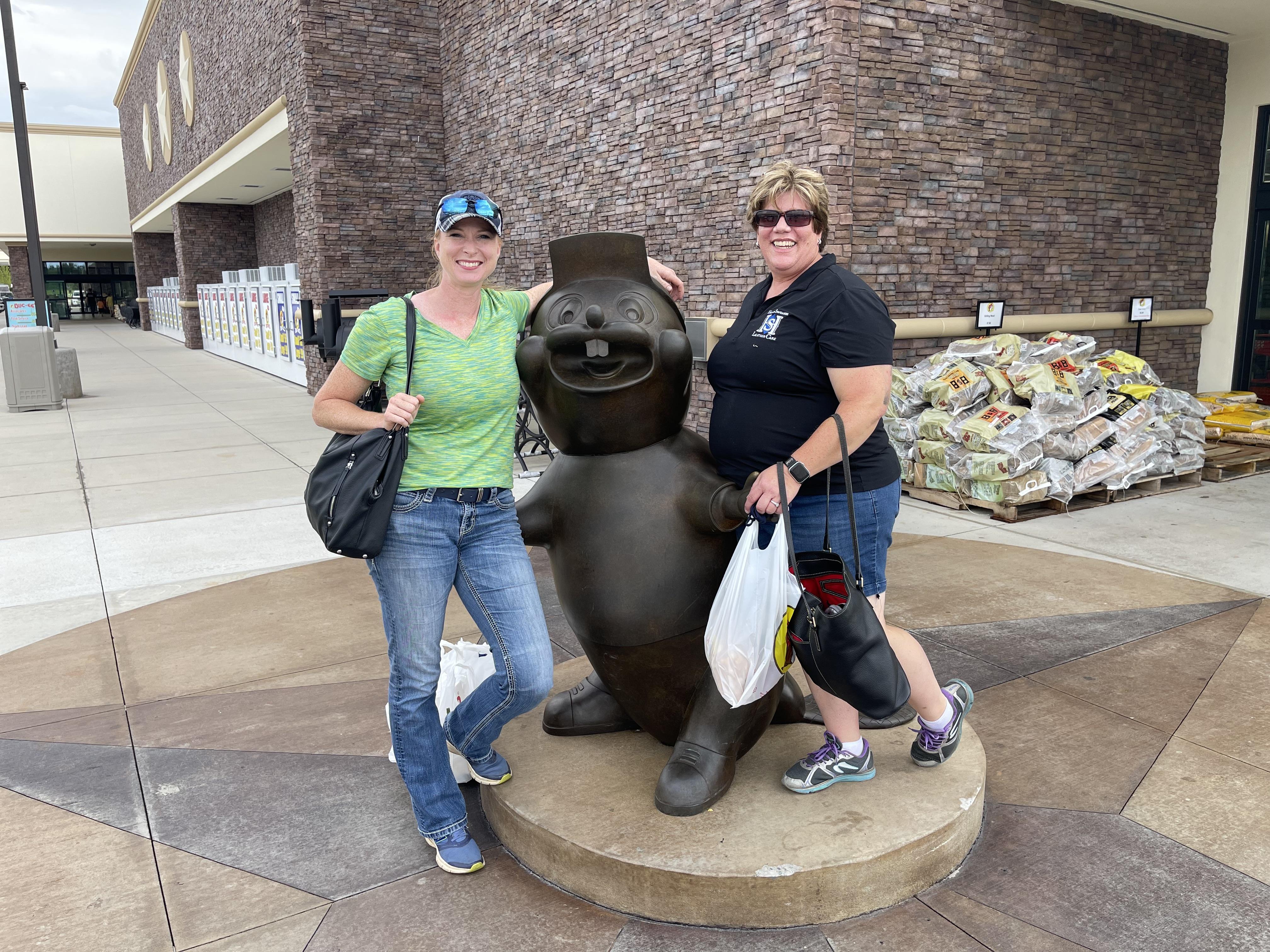 Kristina and me with the Buccee’s Beaver on our road trip, photo credit to the unknown travelers who were kind enough to take the photo. 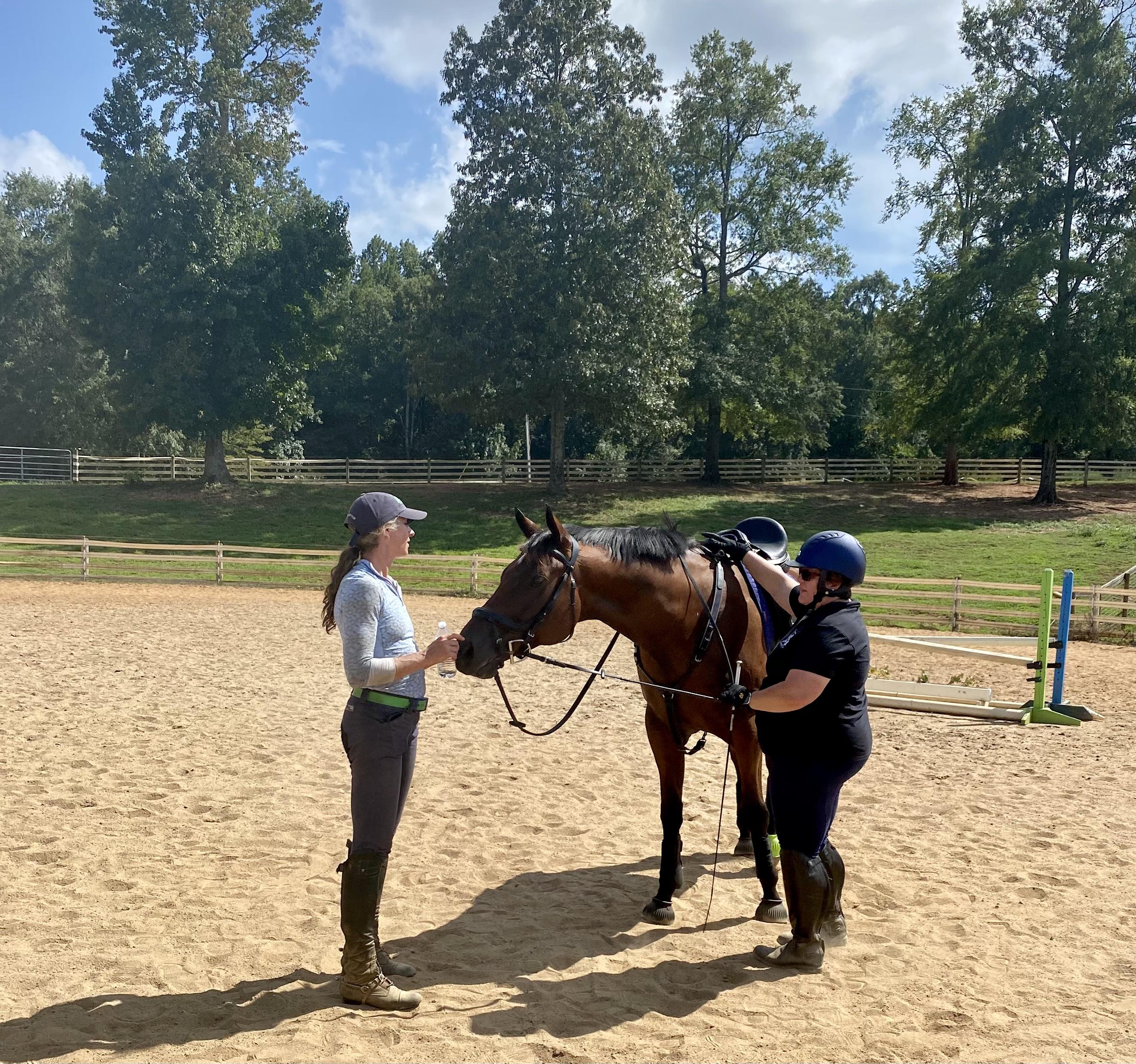 A.P. Graham, me, and Spider. Photo by Kristina Littlejohn. 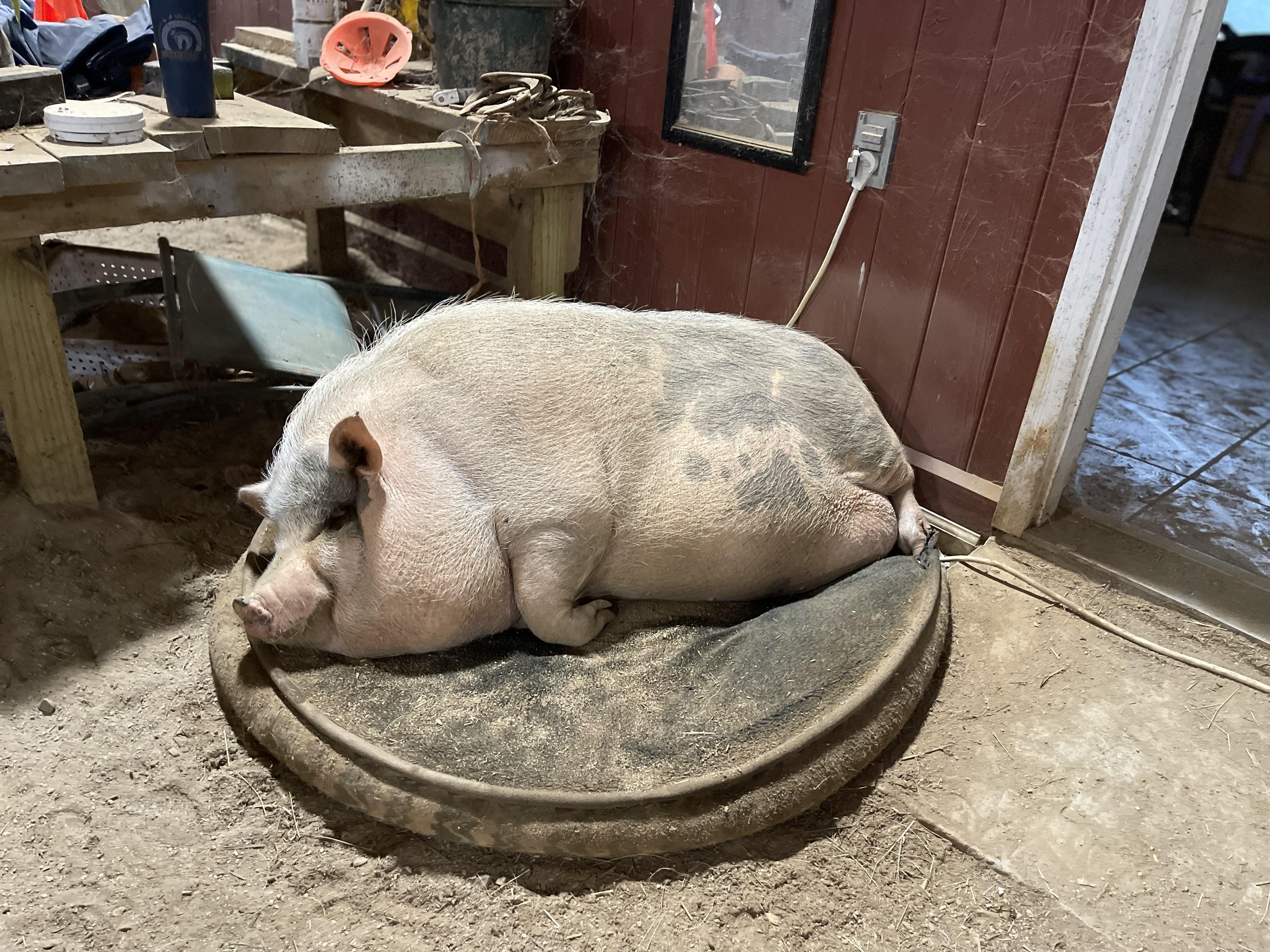 A favorite of our trip, Pig, who appears to be resting on a charging pad. Photo by Kristina Littlejohn.

But, since then, he’s displayed serious sour behavior, and he has bucked me off once. We’ve not had a good working ride since then. He’s had his teeth done, he’s seen his favorite chiro, and had his saddle fitted. Yet, still, he’s been difficult. So, the worries about travel, coupled with dire warnings about what his fate will be if he bucks me off again, tipped me from “why not give it a go” to “this truly does not make sense and could have seriously bad consequences.” 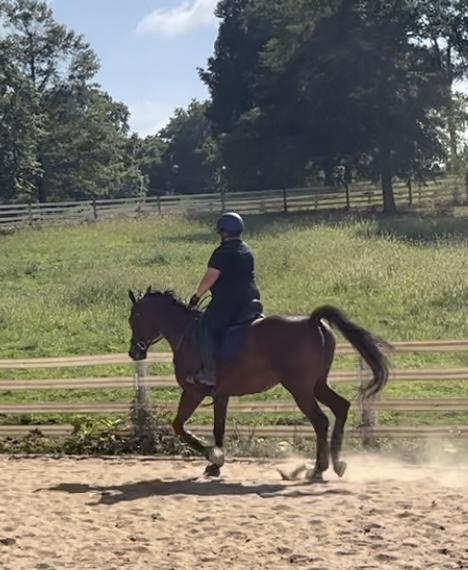 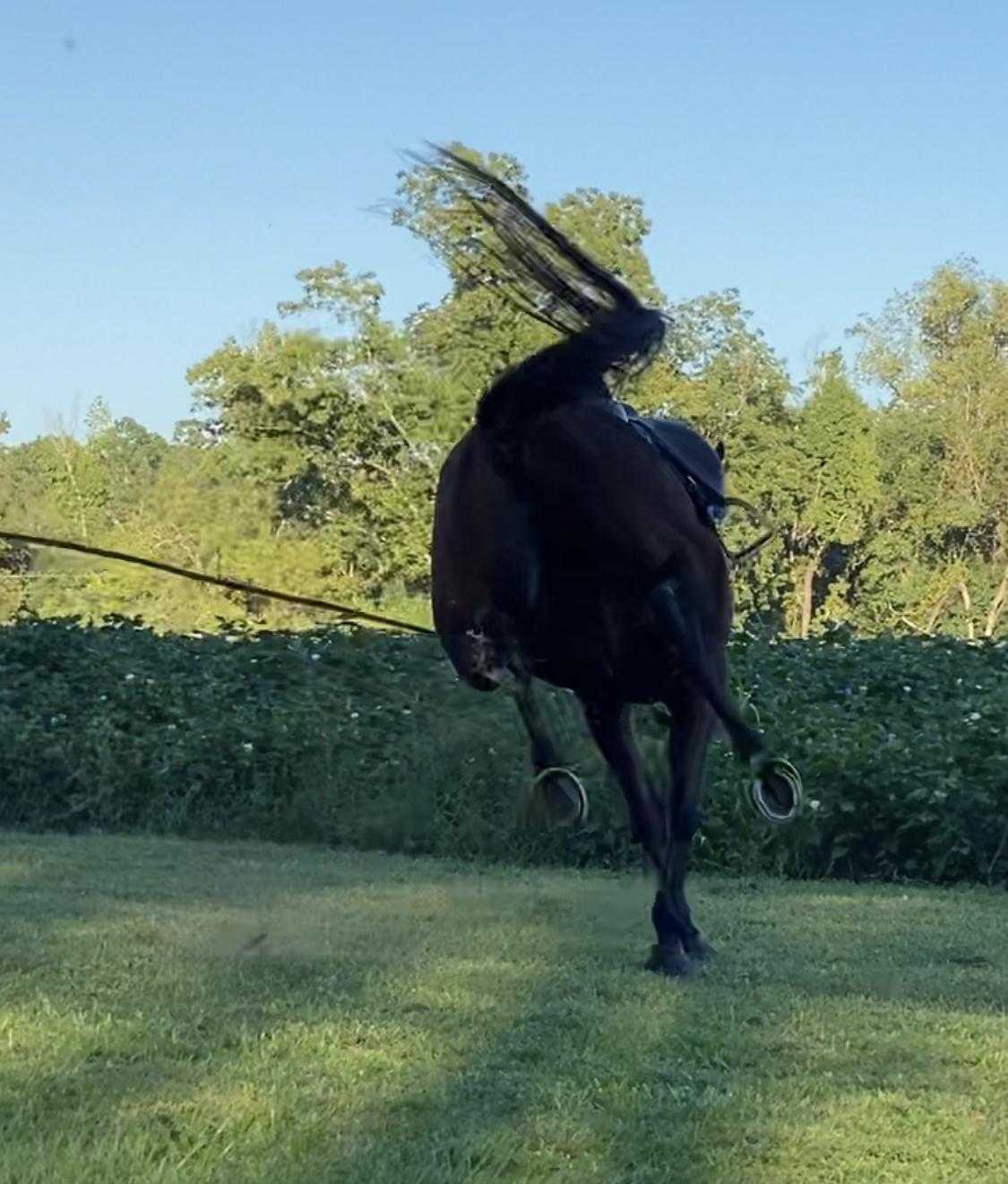 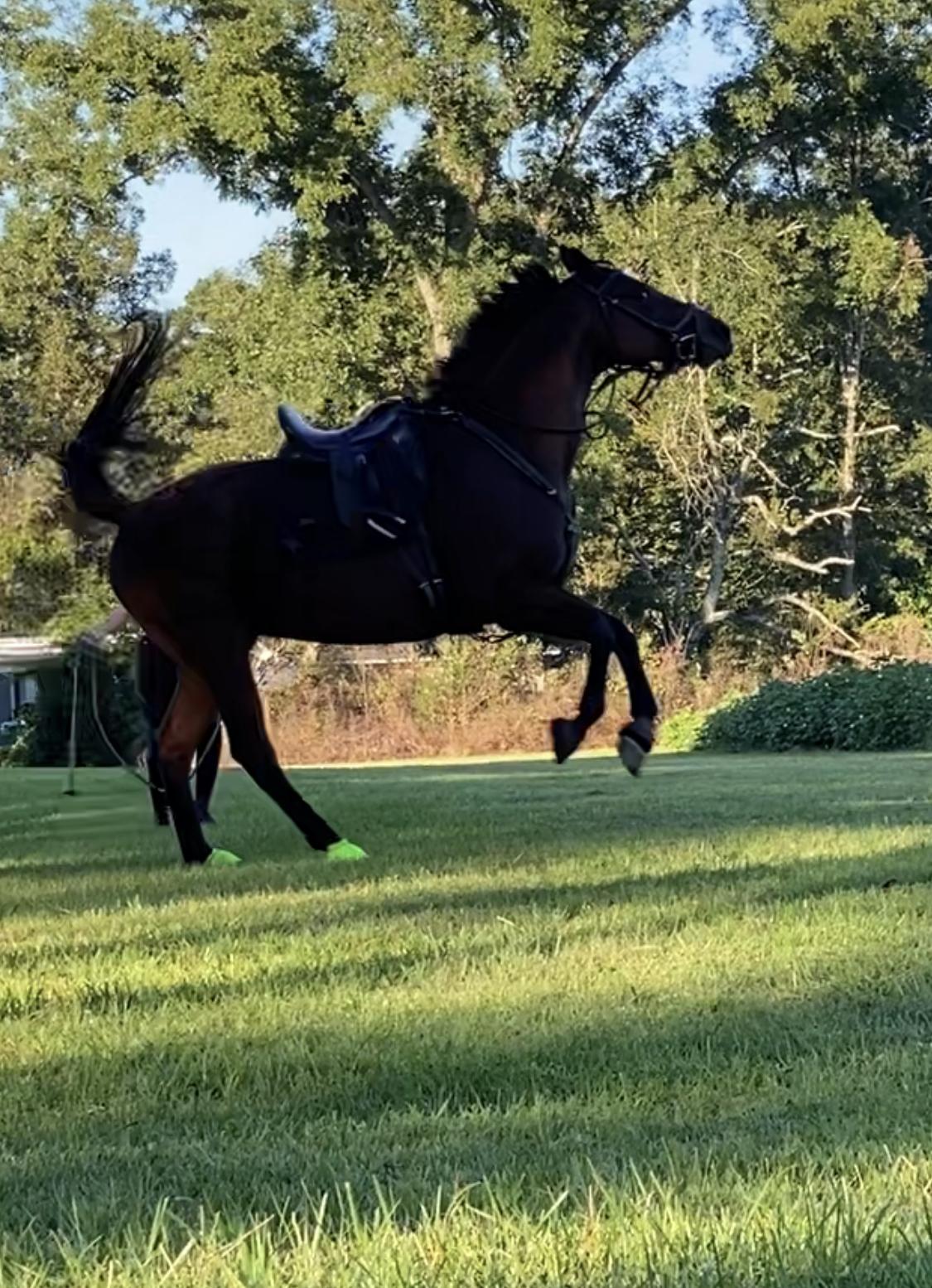 Spider being “expressive” at home. Photos by Libby Henderson.

I saved this quote earlier this week from Why We Can’t Sleep: Women’s New Midlife Crisis by Ada Calhoun: “How do you know when it’s time to give up a dream? How do you know if you’re like one of those success stories, the type who never surrendered in spite of everyone telling them they were deluding themselves, or if you’re a sap who needs to stop kidding herself, be realistic, and grow up already?” I read that and thought “exactly! When do I know that it is time to take the concerns seriously, and waive the white flag?

That time came this weekend. I do not doubt that it is the right decision, but it is far from easy. This was our one chance to be a trainer at the Makeover (at least foreseeably – I do not wish to get divorced, so I don’t see bringing any other horses home, unless I found a unicorn that was perfectly trained, guaranteed not to buck or cause any other issues, and to never have vet bills. Hah!). I was looking forward to a week in Kentucky, tours of a few farms I have dreamed of seeing, making new friends, and soaking up the incredible atmosphere of the KHP filled with people that share my interest and vision in helping these horses to have a new and wonderful career. I wanted to be one of the cool kids that actually made it there, even if we were not prepared to show. I have a color-coded schedule of where to be when, and what cool things we would see. Pushing “submit” on his withdrawal last week was really, really hard.

My head has been full of the voices that rise up at times like these, when I face failure. “What did I really expect? I never complete any goals.” “Well, it isn’t as if this is a surprise, you never follow through and achieve the things you say you want to achieve. Once again, you fail to live up to your potential, even with all these nice people helping you.” And worst of all, a comment attributed to my dad before he passed away that lives on in my brain, “What a shame it is that she never amounted to anything.”

Those are vicious voices. Fortunately, they don’t stay around for a terribly long time. One of the best things I’ve done in my Makeover prep has been to take a Makeover Mindset class with fellow trainer (and all around awesome person and certified Life Coach) Jazz Naprovnik. She’s taught us to consider whether we’d say the things we say to ourselves, to a friend. The answer, almost always, is NO. I would never talk that way to someone I cared about. So, why do I do it to myself? I clearly need more work on this.

The Makeover is a wonderful event, and a worthy goal. But, as the trainer’s group on FB will always remind us, it is only the beginning for these wonderful horses. Spider isn’t easy, but he does have potential, even if it will take more time, more understanding, and perhaps some different approaches to unlock it. I really need to be fitter myself, so I have more of a chance to stay with him if he does do something silly. I’ve written a couple of times about making my horses and riding more of a priority, so that the work gets put in, but I’ve still been unable to do that. The devastation of having to make the decision to give up on this dream may finally be the impetus to actually make that change. 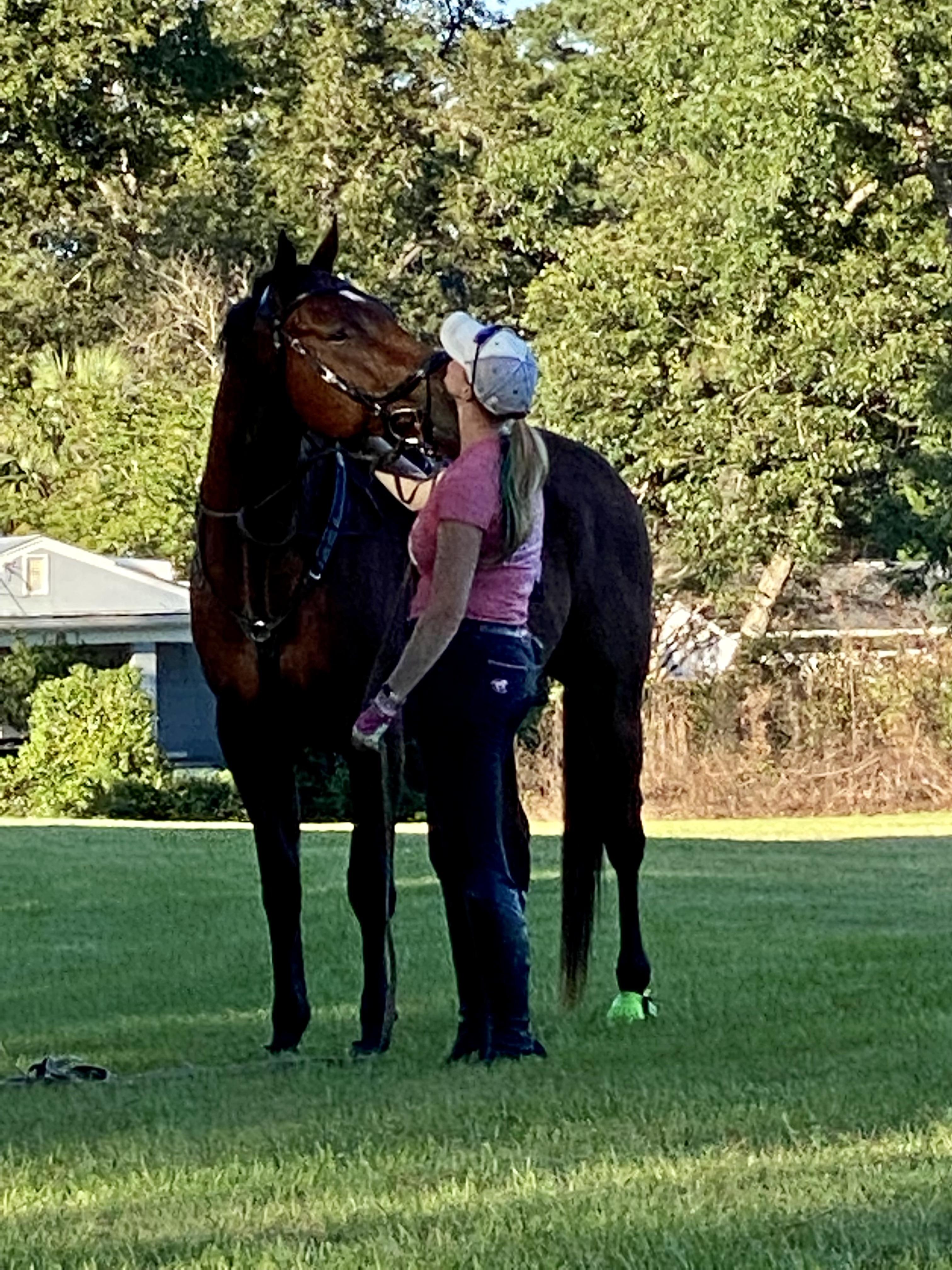 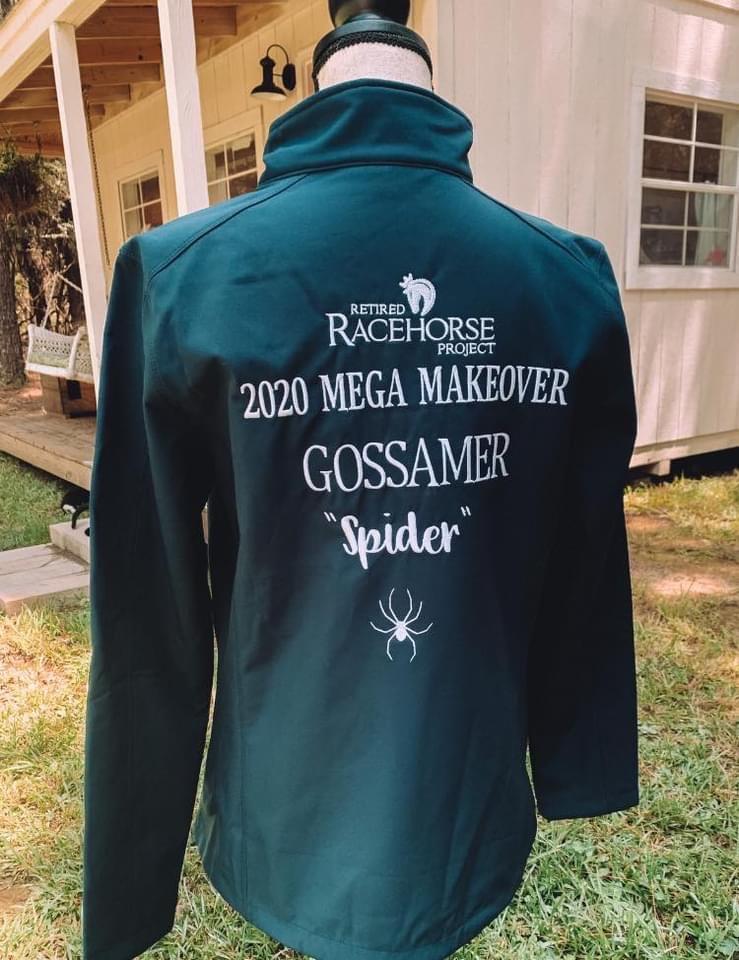 Do you think I should have the word “Almost” added to our jacket? Excellent design, embroidery and photo credit to Nan Byrne-Barrow of Lollygirl Monograms.

We aren’t giving up, and I cannot thank the people that have supported me on this journey enough. My Aunt Suzanne, who is not at all horsey, but has been there with caring support for her grand-nephew Spider the whole time, even if she doesn’t quite understand what she is supporting; Kristina Littlejohn, who was the first to sit on him post-track, and is still working with him and me today; Kelley Norred, who supports me even though she wishes she would get to train me on a horse without issues someday; A.P. Graham, who has continued to believe in me and in Spider and whose advice is golden; Camille Byrd, who took him in and gave him great training and who has always supported me; to Jazz Napravnik, whose gentle but tough questions and homework have done so much to help me start to re-wire my brain; to Tik and Sinead Maynard, who’ve answered questions, and let me be involved in camp and lessons, even when I wasn’t ready to be there yet; Patti Austin and Kris Waikins, who have listened, given advice, and been there when things don’t go well and cheered when things are wonderful; Cyndi Kurth, who has brought home her own OTTB, and who will join me out there at the tiny fences someday soon!; Kristen Brennan, who was willing to open her farm to Spider for the Makeover week, and together with Tara Tibbetts, are the other members of the #Ghostzapperclique; To Scott Richardson, my vet here at home, and Ali Morton, our veterinary lameness guru at UF, and to my farrier, Casey Breg, who never gets mad with Spider, even if he tries to pick him up by his chaps; And to Sharon Rose, who worked out the details and made it possible for him to come to me in the first place. Thank you all for supporting us, and this dream. And thanks to everyone who has read Horse Nation and followed along. I’m sorry I won’t be writing up a final blog entry that tells how fabulous the Makeover was, and how much we enjoyed it. Instead, I’ll be following along on social media and wishing everyone the best week ever! 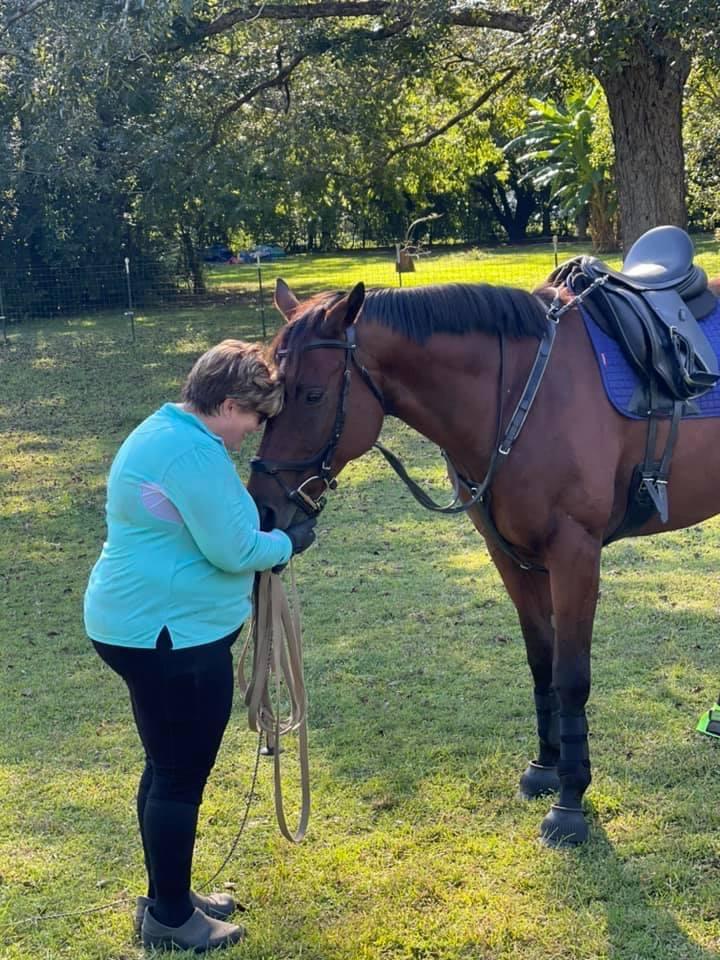 Me and Spider, working on what comes next. Photo by Kristina Littlejohn.