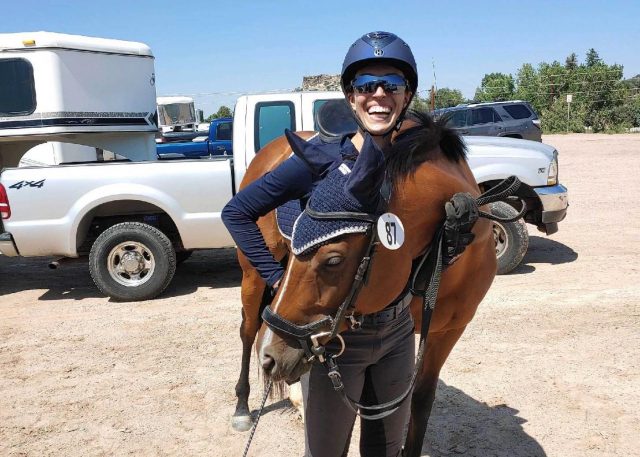 “Every single OTTB I’ve ever worked with has had that in common. They try their hearts out and leave it all on the field. EVERY. TIME.”

For 480 accepted trainers, the journey to the Retired Racehorse Project‘s 2021 Thoroughbred Makeover and National Symposium, presented by Thoroughbred Charities of America, has begun! Over the next eight months, four of those trainers will blog their journeys, including their triumphs and their heartbreaks, successes and failures, for Horse Nation readers. Today, blogger Britany Chism discusses the heart of the Thoroughbred and determining whether or not to do a second discipline.

I probably shouldn’t say this too soon, but I recognize that I have been VERY lucky in my preparation for the Thoroughbred Makeover. Throughout the journey, we trainers have had the benefit of a Facebook group to keep in touch, share humorous stories to which we can all relate, ask questions, and share in the hardships that are inevitably part of this experience. For some, those hardships have been tougher than others. Some have had injuries that have put them on the sidelines for months, while their prep time dwindled away — my own friends included. As we’ve counted down the days to departure, others have had to make the hard decision to withdraw, some for injury (their own or their horse), and others for the mental well-being and future of their horse. Fellow trainers, for those of you that had to make that call, I raise my glass to you and applaud your tough decision.

It’s a crapshoot when we choose our horses. We have no idea what will happen — if their track “jewelry” (bone spurs and the like) might cause issues later, how much time they need to recover both physically and mentally from the rigors of the racetrack. We don’t know how they’ll take to retraining, or even what discipline they’ll take to. When searching, many of us look for the offspring of the known sport horse sires, or the current top 20 producing race sires (a group that Kittie’s  — JC Itybityquikasakity — own sire belongs to), and some even the complete unknowns that are simply built really well. Some have remarkable race careers, while others just can’t hack it on the track — and it often comes down to just seconds of a difference in speed. Of course, we have our speculations, but you never really know. None of this makes the actual horse.

As we come to know our mount, in the nuances between sessions, the moments of brilliance in the tack, and the quiet moments on the ground, it’s their hearts that make them. Every single OTTB I’ve ever worked with has had that in common. They try their hearts out and leave it all on the field. EVERY. TIME.

I had no idea what I was signing up for a year ago when I tried that cute little three-year-old filly. I simply sought a nice, young OTTB with a big heart to bring along.

And it’s this that I share with my fellow trainers, and reflect on as this part of the journey comes to a close.

We’re united in our desire to show the world what incredible, level-headed, trainable creatures these Thoroughbreds are. 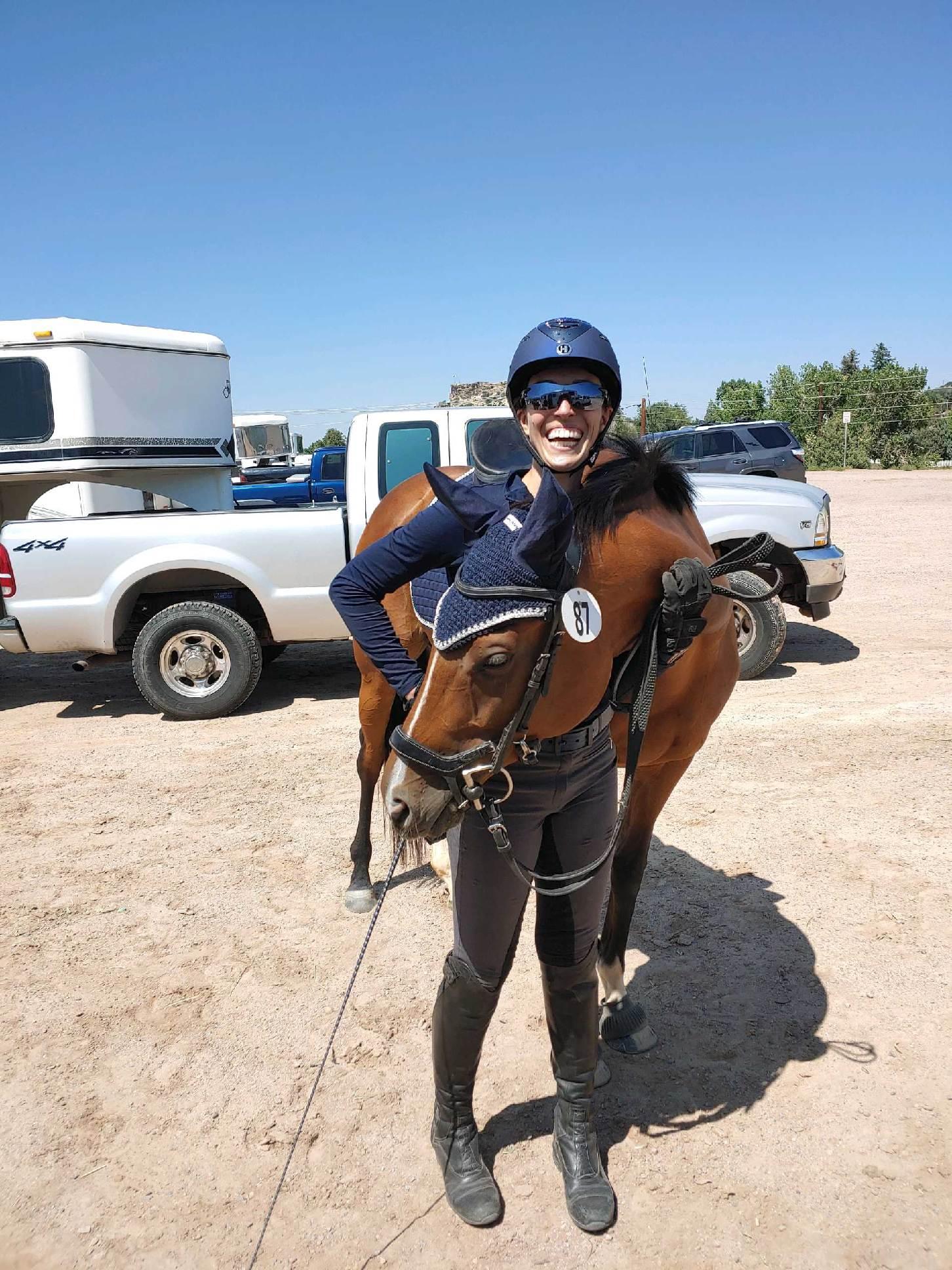 You’d think she was giving me a hug, but really she was just looking for treats. Photo by Lynn Klisavage.

So we train. For 10 months we have trained these amazing animals (and they trained us!) and they showed us their hearts. We’ve prepared them for an environment that for many is the biggest they’ve ever performed in, and for some will be the bridge to their new person via the Marketplace that runs alongside the competition.

For myself, this will very likely be the only Thoroughbred Makeover I’ll ever attend as a competitor. Kittie is my forever, and we only get one shot.

But it’s going to be one helluva shot.

She has a soft mouth, a sound mind and body, and she LOVES to learn. We’ve had a few bobbles but overall, she takes things in stride and generally excels when the pressure is on. She came with nice natural gaits, and they’ve developed even further. Her glow up rivals the best of them.

A race-fit 14.3 hh Kittie on the day I went to look at her versus now — packing on the pounds, and getting perfectly round in all the right ways! Photo Credit: Britany Chism and Susan Sheldon.

Sure, she has come in from the pasture on occasion with some minor dings and prescribed a couple weeks of stall rest, but beyond that, she has been easy to care for, and we’ve had no catastrophic lameness or wounds. Did I mention how lucky I was in finding her?

In this, we’ve already made it. Regardless of the outcome in October, simply having the goal to work towards has turned her into a beautiful sporthorse that’s going to go on to accomplish some pretty incredible things.

Whatever happens next is just gravy.

I’ve entered two disciplines — the primary, dressage, has consumed us entirely in the last two months, particularly because Kittie has had challenges with the canter. We CAN canter now but still struggle with departing in the correct lead. It’s getting better and I have faith she’ll get there in time, but it would not be worth going all the way to KY had we not focused on this gap in her training.

As a result, however, she now has even bigger gaps in our second discipline, Freestyle, for which we planned to do a liberty routine.

The big question now is, do we double down on her talent at dressage and scrap the liberty?

Don’t get me wrong, she has some solid skills at liberty (far more than your average horse), but she cannot jump a single standing barrel, nor can you fly a tarp like a kite behind her, and these are skills the top five 2019 horses exhibited.

Getting to the top five is by no means the goal of going, but there does come a point when you have to question where and what you should be focusing on with departure less than 30 days away, simply for the sake of sanity.

It’s about setting realistic goals for the long-term benefit of the horse and the future you want to set it up to achieve. For Kittie, that means walking away with a positive experience, getting a taste of one of the nicest facilities in the country, and coming home with a more experienced horse.

For dressage, we’re required to ride the Training Level 2 test, and then have an opportunity to show off our horse’s moves in a second demo ride. That ride can include any movements we feel they are exceptionally good at, and you’re scored on how correctly and willingly they execute those maneuvers and penalized for any they are clearly not ready for. Canter aside, Kittie’s got MOVES in dressage. Lateral and otherwise. 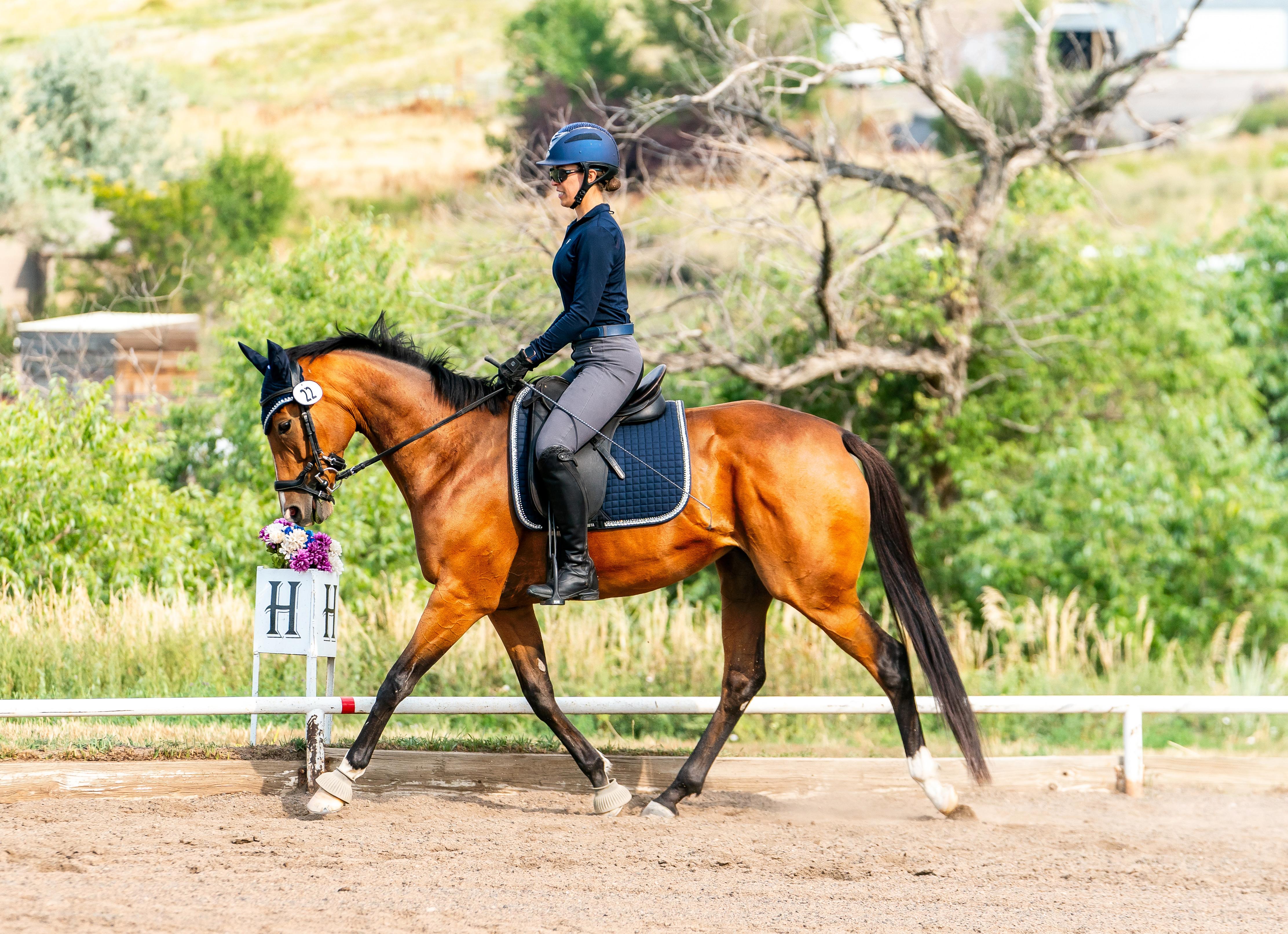 Kittie’s first professional photo… who am I kidding? I bought four! Photo by Susan Sheldon.

So, for now, the silent debate in my head will continue. Liberty further develops our bond, so there’s no harm in continuing the practice, but I will do my best to consider my own needs as well. If there comes a point where something has to give, it will be the Freestyle. Raising my own stress levels will only serve to raise Kittie’s and that’s counter to our goals.