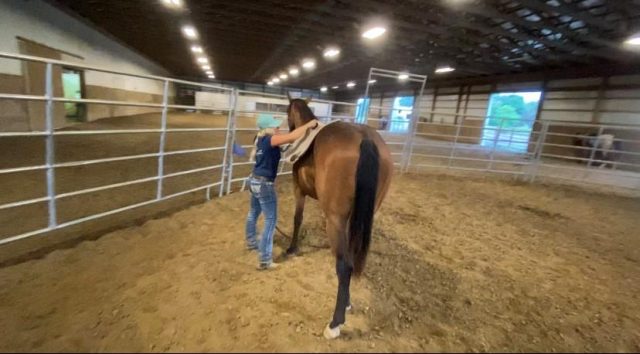 Yearlings can be difficult, especially big, spicy Hot Sauce. Sometimes I can be extremely hard on myself when it comes to her training so it was good to hear Jared say, “If she does go to bucking, it’s not the end of the world. Horse’s make mistakes. Just yield her hindquarters and mean it.”

In my last article I discussed how each of my horses was benefiting from training at Penley Horsemanship. Now I want to elaborate on how Hot Sauce is advancing at our weekly lessons.

Hot Sauce is my AQHA yearling. Up until the beginning of summer, she had not left the farm. I decided that needed to change and began hauling her with me to my lessons.

Normally, I will put Hot Sauce in one of the corrals in the arena so she can listen to the shooting to become more familiar with it. Exposure, exposure, exposure. I want her so accustomed to the gunfire that when she’s ready to be introduced to pattern work, the gunfire will be no big thing.

On one of my lesson days I arrived and it was thunder storming with no end in sight. We were unable to run patterns in the outdoor due to the lightning and the indoor arena had a round pen set up, so there wasn’t enough room to run a pattern inside either. 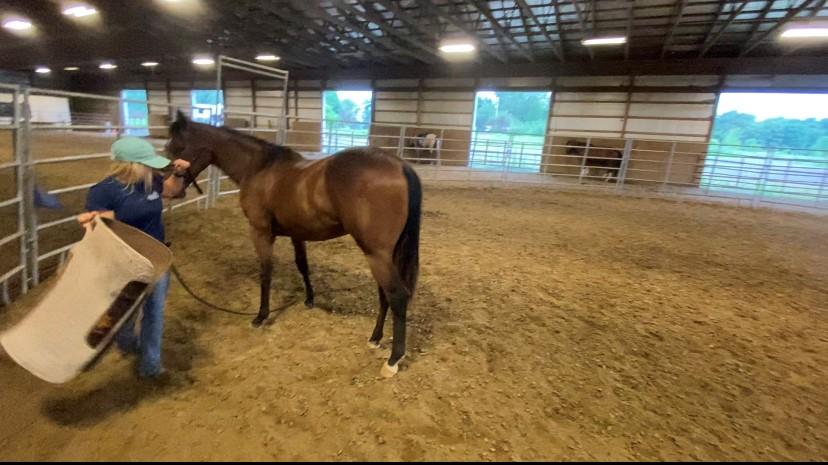 Instead of packing up and driving back home we decided to do a lesson with Hot Sauce. Going into the lesson, I honestly thought I was doing everything I possibly could to ensure I’d have a solid horse when it was time for breaking and riding. I was wrong. I wasn’t even doing a fraction of the exercises I could have been and there are many gaps in Hot Sauce’s ground work education.

When I say I learned a plethora of information in a little over an hour, I’m not exaggerating. I can not believe one person holds so much knowledge and I was really excited to learn as much as I could. I was sucking up the information like a sponge. I even videoed it so I could watch it over and over and over again — and I have.

We first started by Jared observing what I was doing. I found out that I was rushing her into different maneuvers without giving her time to process them one at a time. At a year old, whether it be yielding the hindquarters or switching directions, each maneuver needs to be separate from the other. They should not be blended.

One very important thing I learned from this lesson is the importance of always having control of your horse’s nose. No matter what you’re asking of your horse, you should always have control of their nose. If I have Hot Sauce’s nose, then her hip will be away from me, keeping me in a safer position. Prior to this lesson I thought the safest place for my horse was at the end of her lead line, as far away from me asI could get her. That is not true. It’s closer where I can have more control of her nose. 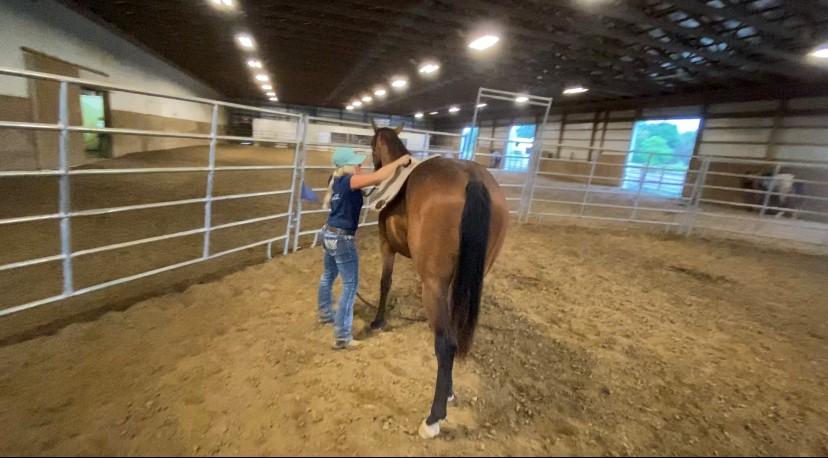 After touching on the basics, we began desensitizing Hot Sauce to a stick with a flag on it. When I think desensitize, I think, “Wave it around until the horse can stand still and not flinch at it.” That was not at all the case. I learned that you always want the horse’s feet moving. You never want them to get stuck in one place. If they continue to move you can still apply and take away the pressure of the stick, but they can process the stimulation while continuing to move. It’s amazing how I have utilized this since that lesson. After learning this, I have sprayed Hot Sauce with the hose and fly spray — both things she hated before — and within not even 10 minutes she was less reactive to both.

After working with the flag stick, we started working on saddling Hot Sauce for the first time. This is a LONG process with colts, which I did not realize and had I not done it with a trainer, I would have done it all wrong.

First was the saddle pad. We threw it on, took it off, threw it on, rubbed it all over her back, hind end and neck, took it off. Over and over again. She never really had a reaction to it. Honestly, I thought she’d go bolting.

Once we did it from both sides, we started doing the same thing with the saddle. We’d throw it up on her back, make noise with it and not be shy or quiet with it. Then we’d take everything off, saddle and pad. We did it on both sides multiple times. Surprisingly to me, she did not take off like the fiery yearling she can be. She went through the entire process like a seasoned, broke horse.

Next, Jared started cinching the girth. To start he just rubbed his hand on the area where the girth would go. She didn’t seem to mind that. Next he would get the cinch, pull it up and let it go. He did that several times then he actually cinched it up. One or two holes, release. A couple more holes, release. More holes until it was snug, release. Then he would make it snug, step her off, release, make it snug, let her travel a little longer, release. He did this until she was trotting circles and then again, release.

The goal, and this is important, was for Hot Sauce NOT to buck, for her to move her feet and stop her feet. Many people cinch up their young horses and push them into a canter and they buck a while. It is more beneficial to go through the process slowly and allow the horse to learn to move out without bucking.

Another really important point that I needed to hear was, “If she does go to bucking, it’s not the end of the world. Horse’s make mistakes. Just yield her hindquarters and mean it.” I want to make sure I’m doing everything right to make Hot Sauce as successful as possible and many times I’m extremely hard on myself when it doesn’t go as smoothly as I’d like. It’s good for me to see her make mistakes and understand how to correct them. It’s also beneficial for me to be cognizant of my mistakes and learn ways to improve myself to aid her better.

I know I said earlier that this lesson taught me a lalotge amount of information in a small period of time, but I feel like I can’t stress it enough. Hopefully in the near future, Penley Horsemanship will host a colt starting clinic so I can learn even more (hint, hint Penley Horsemanship). Continuing to learn will only make me and my horses better, and that’s what I aim to do.

You can’t do better unless you know better, and there’s still so much to know.