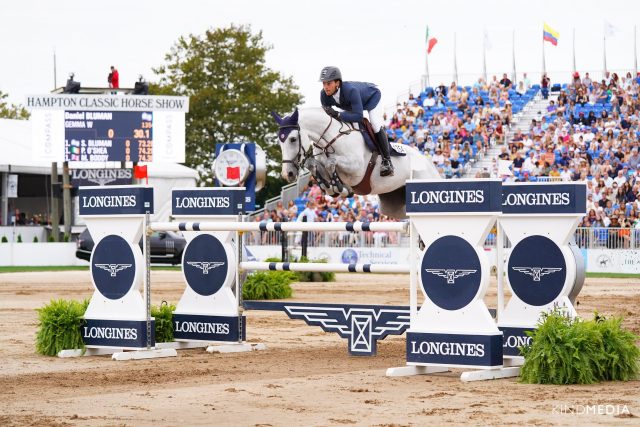 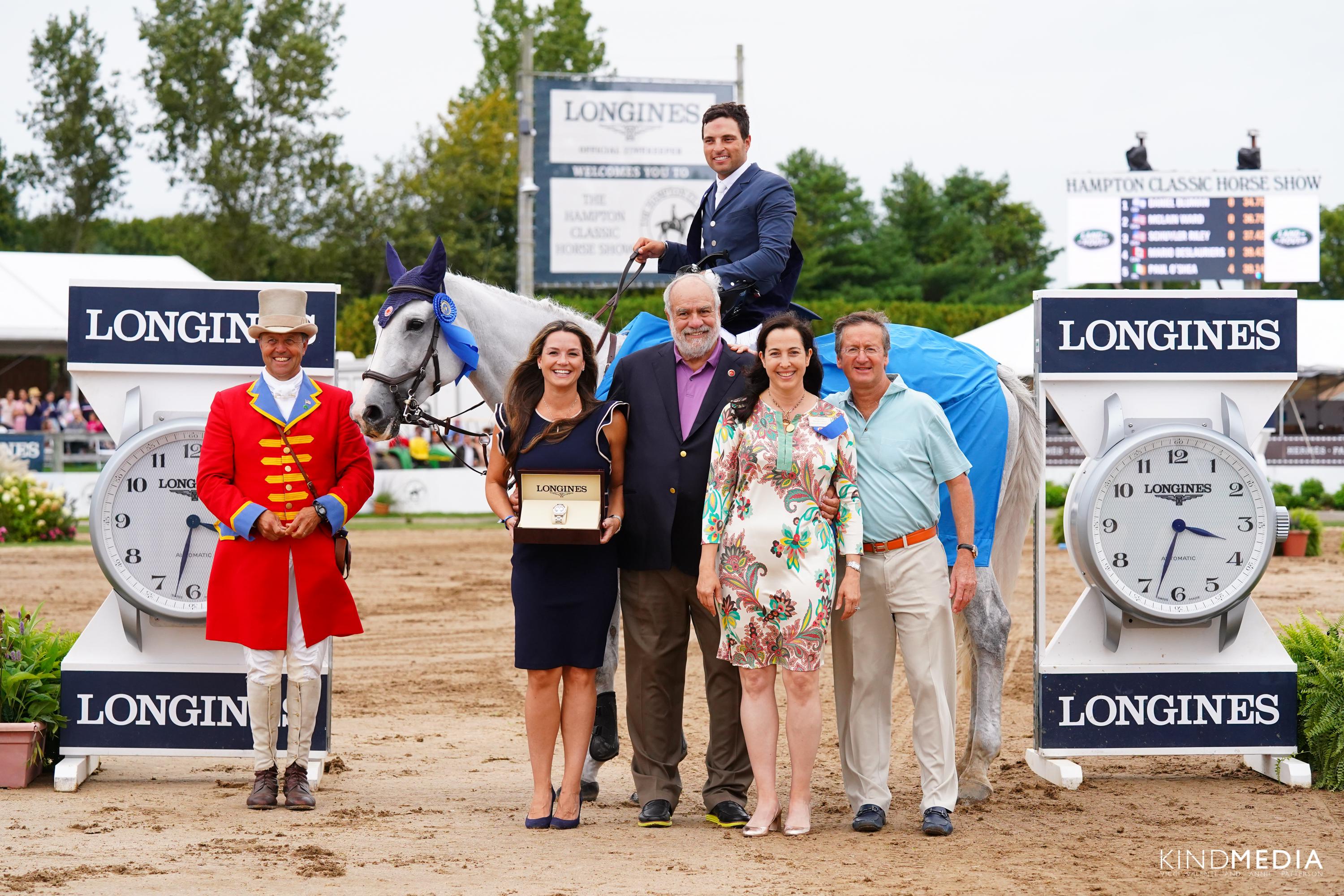 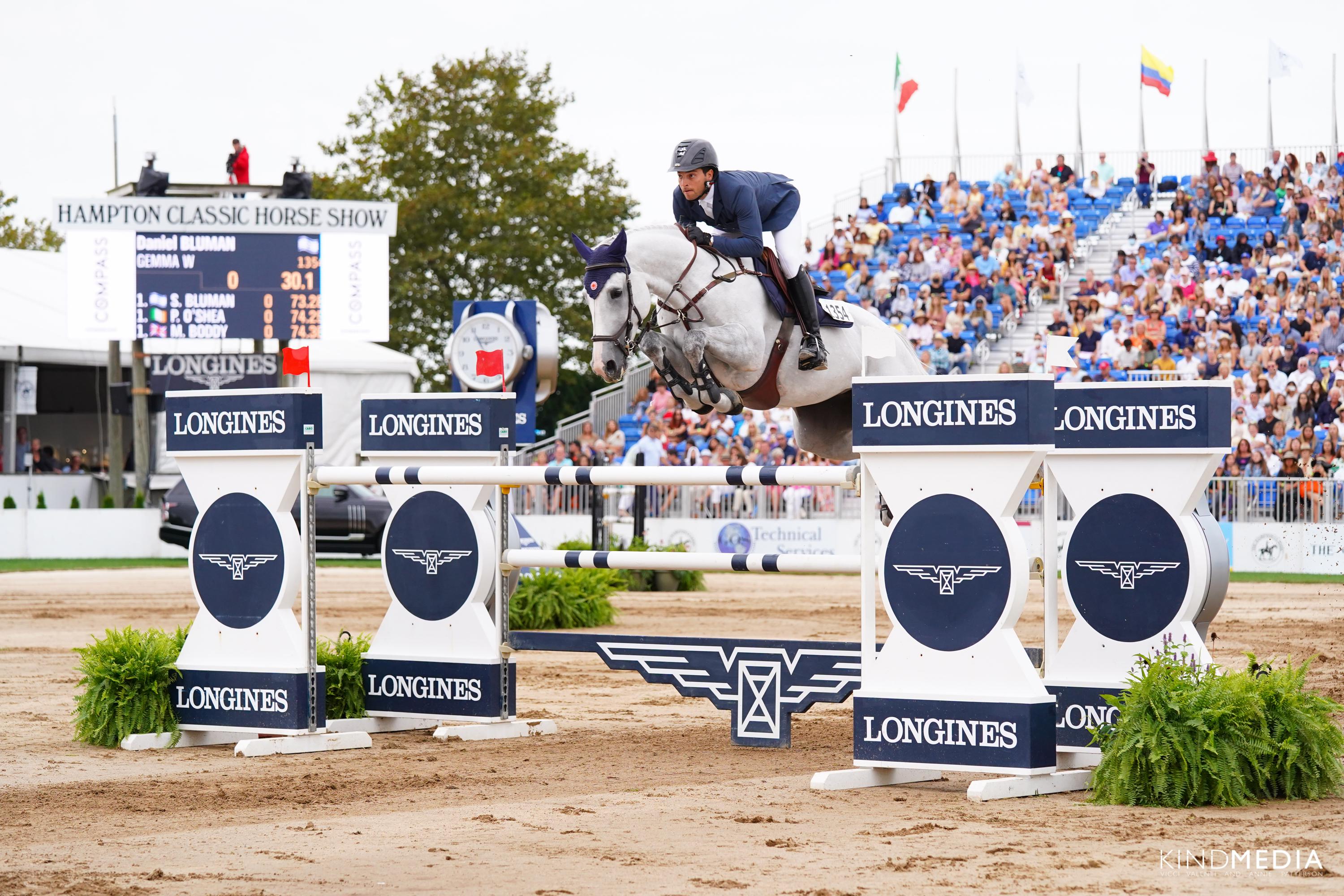 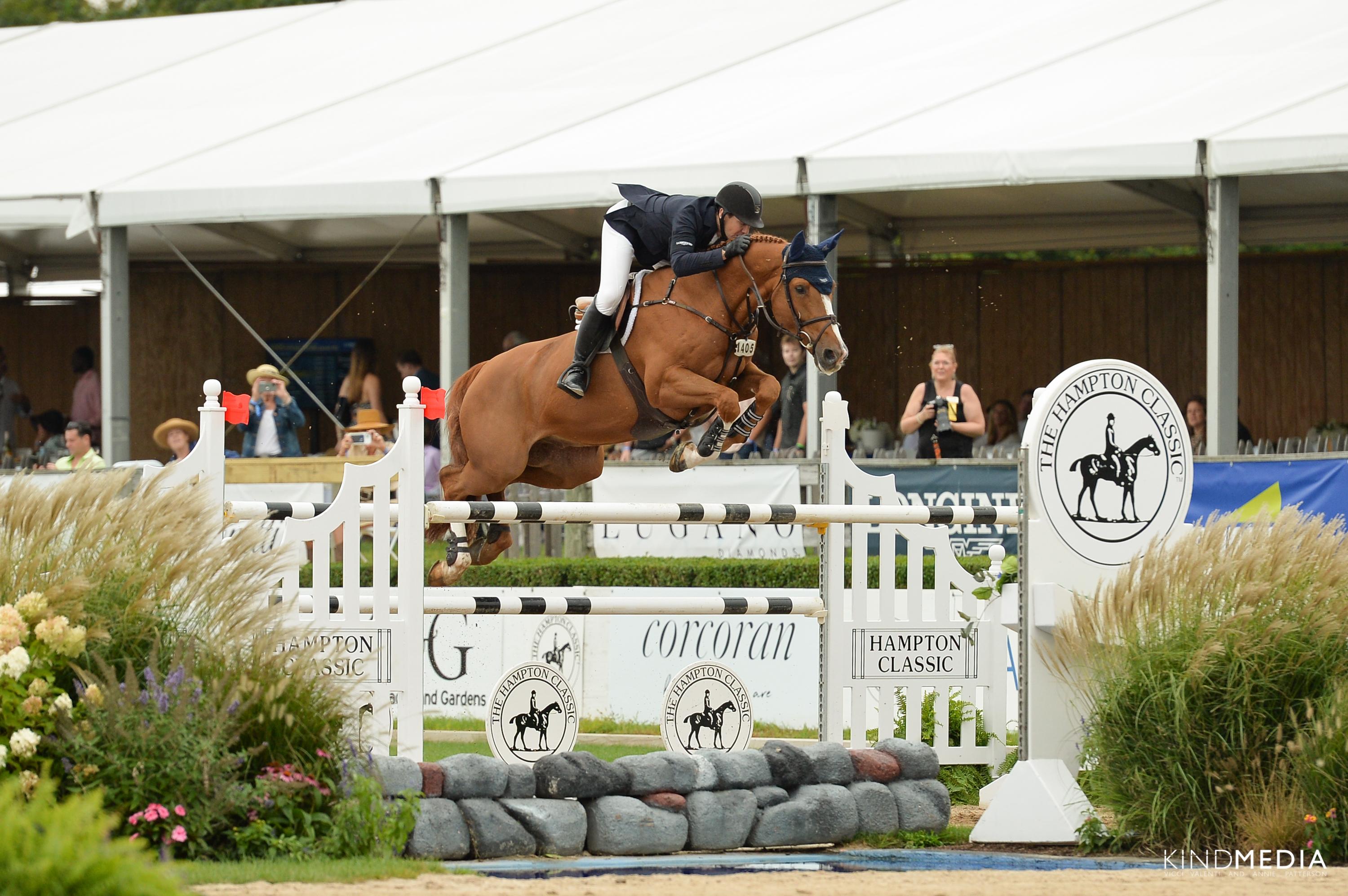 Ward stated, “He’s a super quality horse. He’s always been very careful and he’s a fighter. My team has that horse in spectacular form right now from preparing for the Olympics, where we achieved a dream result. It’s nice that he was able to return home and be fit and ready to go.”

Besides his second place finish in the 2021 Hampton Classic Grand Prix, Ward scored 538 points in Classic competitions to win the $30,000 LONGINES Rider Challenge. Bluman was second with 350 points. Ward was the first American to win this award. All previous seven Rider Challenge awards were won by Irish riders Shane Sweetnam and Richie Moloney. 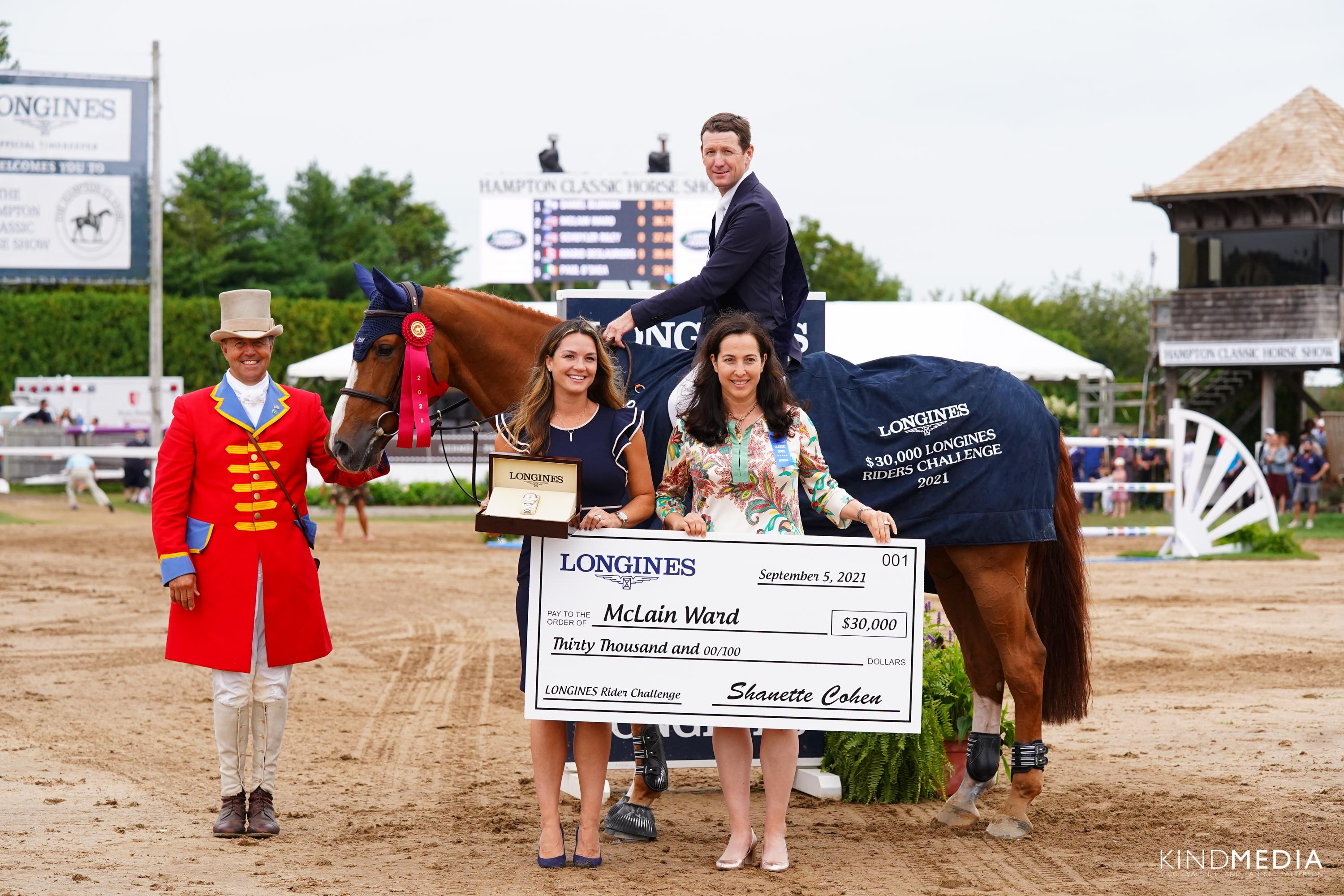 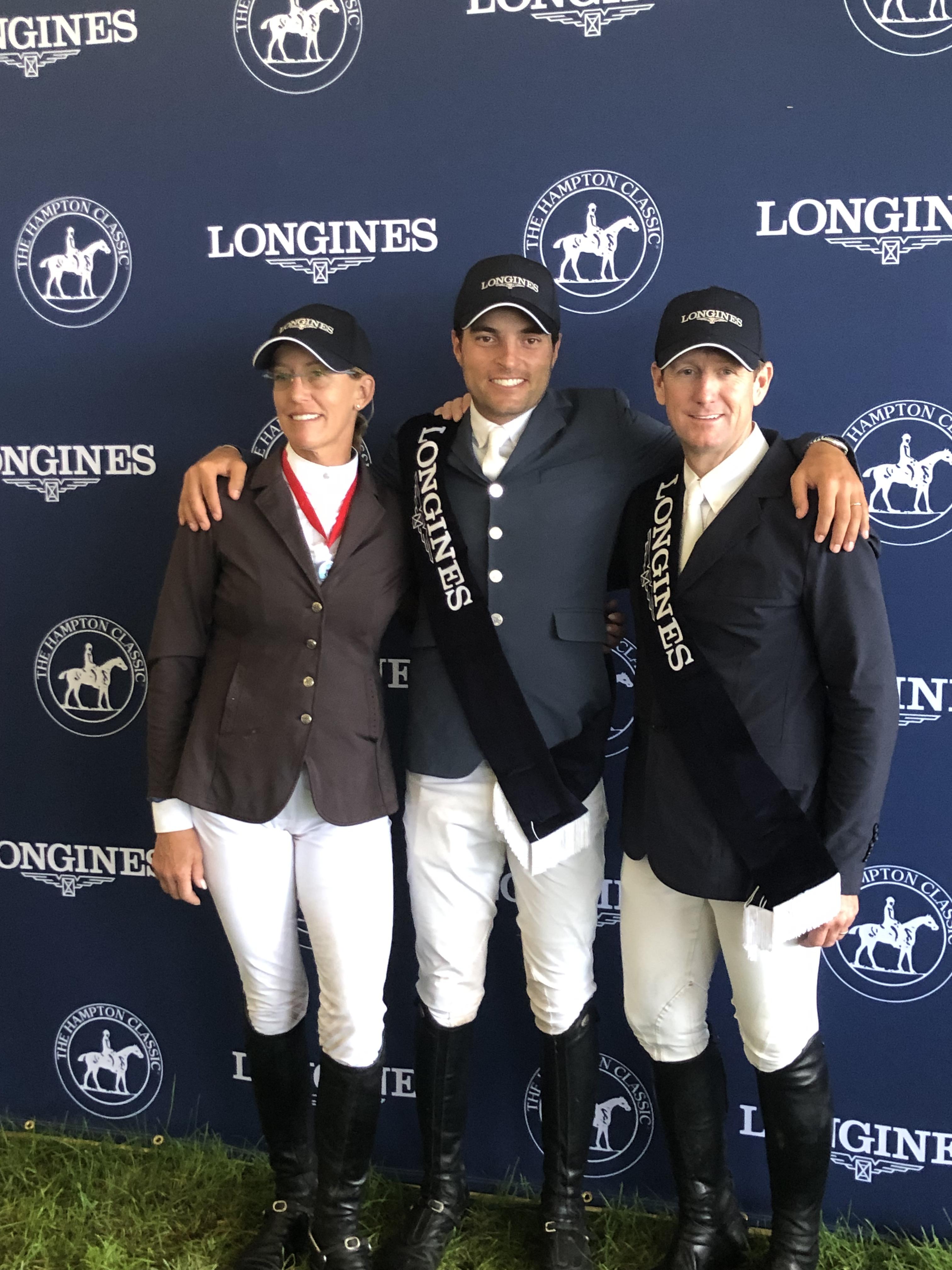 Winner at a press conference. From left to right: Riley, Bluman and Ward. Photo by GBeroza.

At the post-event press conference, Ward commented, “When I landed from the last jump, I knew I’d left the door open [for the two subsequent riders].” Bluman stated that he was just trying to go as fast as possible, and Gemma answered all that he asked of her. “Gemma has been with us since she was five years old. From the beginning, I knew she was very special and athletic. I believe she has a great mind and (emphasized) a great heart.” 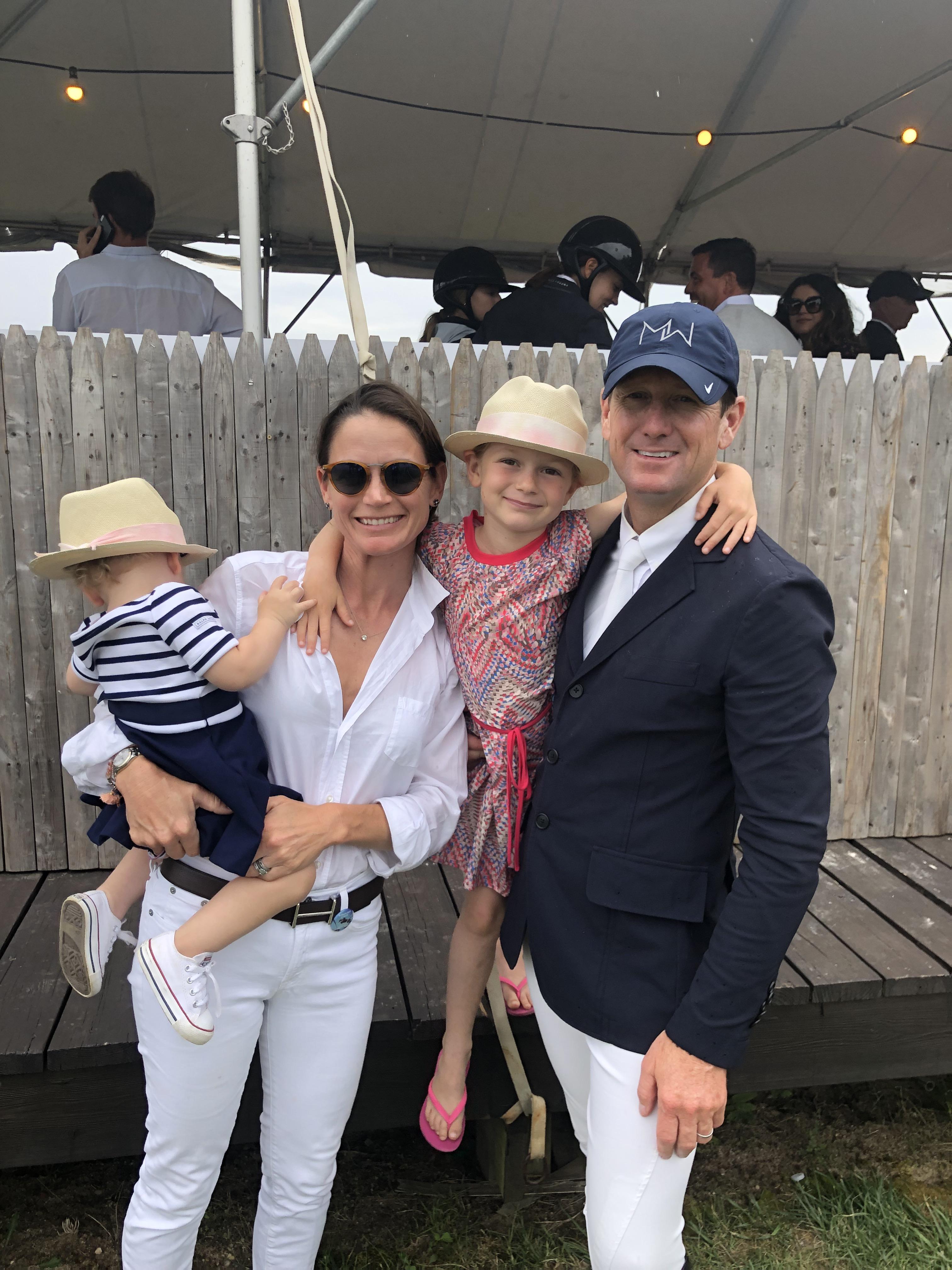 The Ward Family before the 2021 Hampton Classic Grand Prix competition. Photo by GBeroza.

Can’t get enough of the Hampton Classic? Dr. Beroza, aka the  HorseDoc®, has two more in-depth personal Hampton Classic interviews. You can view them on the Talking Horses YouTube Channel or here.

About Dr. Beroza aka HorseDoc®:
Dr. Gregory A. Beroza, DVM, DACVS, DABVP has been a practicing veterinarian for 41 years and HorseDoc® ‘Talking Horses’® media host, author and consultant since 2000. He is Founding Chief of Staff of the Long Island Equine Medical Center and President of the Long Island Equine Medical Foundation Inc. Dr. Beroza broadcasts several equine, medical, and health related productions on the web, on his Youtube Channel, and via contributions to WRHU 88.7FM radio shows which are showcased on www.ONEonONEStories.com. You can reach Dr. Beroza at  www.TalkingHorses.com, www.HorseDoc.com, [email protected], or [email protected]