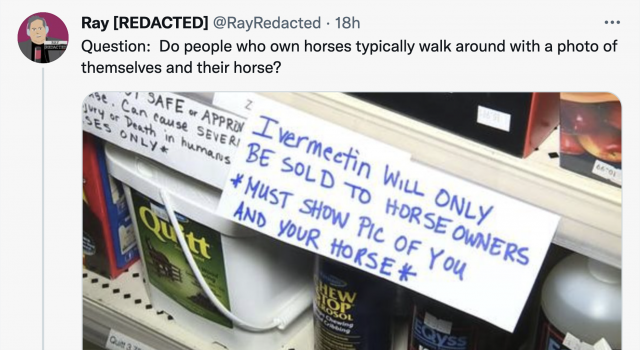 August 30, 2021DeAnn SloanDeAnn Long Sloan#FUNNY, #TWITTERComments Off on The Tweet That Broke the (Horse) Internet

Apparently we are (once again) at that stage of the pandemic when people flock to their local Tractor Supply or Agway in order to buy Ivermectin. The funny tweets abound, but this has broken the internet.

So, Ivermectin sales are going up and, in some cases, the dewormer is hard to find. If you assume, like most reasonable horse owners, that the uptick in purchases of the pesticide is because it’s fall and it’s time to address those nasty tapeworms and other intestinal parasites, you’d be wrong. No, people are rushing to their local  to — you guessed it! — treat (or maybe prevent? I am unclear on this) COVID-19. Because, you know, taking horse dewormers is always a good plan. 🙄

In an effort to prevent the lesser adept of the world from experiencing the symptoms of Ivermectin poisoning (which, according to the Cleveland Clinic, include diarrhea, itching, hives, balance problems, seizures, low blood pressure, coma, vomiting and even death), some stores have been requiring proof of horse ownership before someone can purchase the dewormer.

This is what leads us to the tweet heard ’round the horse world:

Question: Do people who own horses typically walk around with a photo of themselves and their horse? pic.twitter.com/QWjV1R2SZt

Twitter user @RayRedacted asked either innocently enough or completely tongue in cheek, “Do people who own horses typically walk around with a photo of themselves and their horse?”

And then literally every horse own everywhere responded with this (as they whipped out their phones to pull up the 2,367,458 photos they have of them with their horse(s):

Of course those on #HorseTwitter responded like champs. We’re totally here for it. Enjoy some of these highlights:

Ahahaha what a question. I wouldn’t even have to unlock my phone for this one! https://t.co/pEJu37tnn0 pic.twitter.com/H1CFkgCp4s

I carry horse proof if anyone needs a plug https://t.co/O5tHnGMD8v pic.twitter.com/lKwOLE7ZYL

Of course we walk around with photos of the herd! https://t.co/lL1Ae4SUNQ pic.twitter.com/MvYwosXypH

You’ve never met a horse girl, have you? https://t.co/lxEnlxffJR

Moonshine says to PLEASE save Ivermectin for horses!!! https://t.co/KSgKArBB8u pic.twitter.com/NQ2P7VwaO0

gotta be honest that’s like half the point of owning the damn thing https://t.co/XU8SGD2STp

Have… you met people with horses? https://t.co/A0etvnd1l9

My 11,000 pic photo album on this phone would suggest yes https://t.co/nsf28sbmqG

We’re certain the replies will just keep coming. Until then, give your horse a hug, take a selfie with it and try to avoid eating its dewormer.