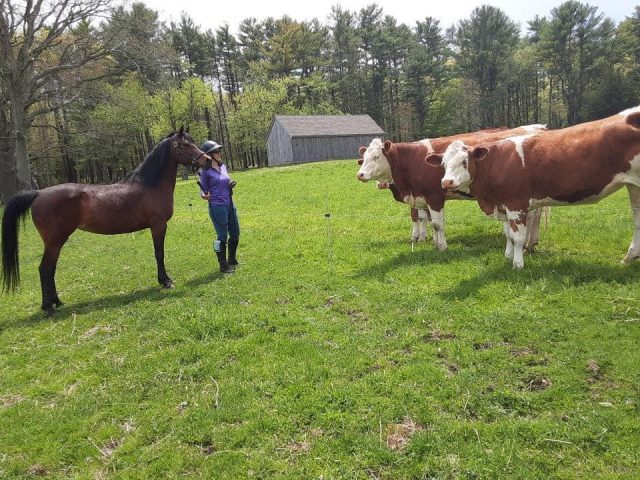 Riding should be fun! That’s why SmartPaker Jess offers these clever solutions for confident trail riding.

With 30 years of experience in the saddle, I’ve had the honor of riding many wonderful horses. From saintly lesson ponies who took care of me as I learned to ride to challenging and difficult horses with training issues. I’m not a particularly brave rider these days, as aging and health complications (I’m 37 going on 75) have taken their toll on my body. I’ve always had some nerves and anxiety about riding — particularly with showing and bringing my horses away from home to a new environment. 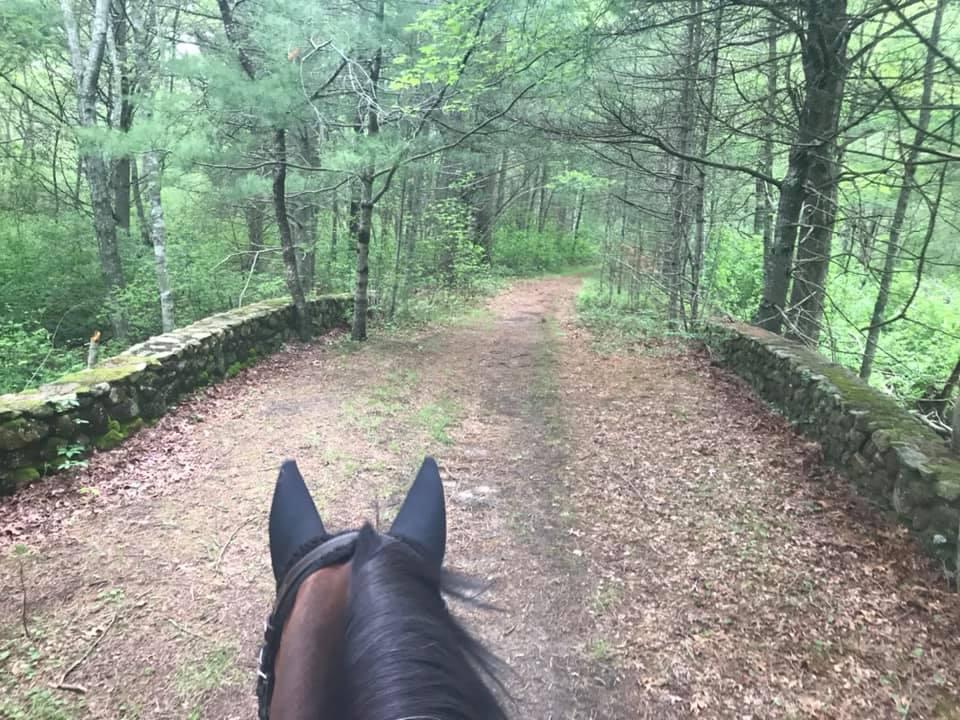 I grew up riding hunters and dressage, showing in local shows around my home state of Connecticut. I spent most of my riding career in a ring, with only an occasional short walk around the property and a few trail rides here and there during high school. My horse at that time was not particularly trail savvy, and I was so anxious out of the ring that we just fed off of each other and had a miserable time. In college, I had the opportunity to ride my barn owner’s horses who were used to trail rides and took great care of me. I started to really love riding out in the woods, but I still had the same horse who had some bad experiences with me and my anxiety on the trails so I never tried taking him. After college, I taught and managed a barn that had trail access and started going out a bit more regularly on brave horses. I was in the prime of my riding career, riding multiple horses 6-7 days a week and pretty confident in the saddle at that point. Trails became fun, and I enjoyed the time out of the ring to relax and recharge my mind and my horse’s mind.

Fast forward a couple of years and I had left my job as a barn manager/assistant trainer and started working in the office. I still had one horse but had to retire her. I hung up my boots for about 10 months, thinking that I might be done with riding. The itch was still there though, and I found a woman who had a horse that needed some miles under saddle. I started working with him and taking her other horse out on trails when I had the opportunity. I was having a blast and really enjoying riding again, rather than stressing over getting everyone ridden, making sure training was progressing at the right pace, and worrying about what the judges’ comments would be on my dressage tests. Sadly, my new ride ended up retiring and I was left looking for another horse to ride. I was given the opportunity to work with a young Arabian mare at the farm, who is now mine, and my current trail mount. 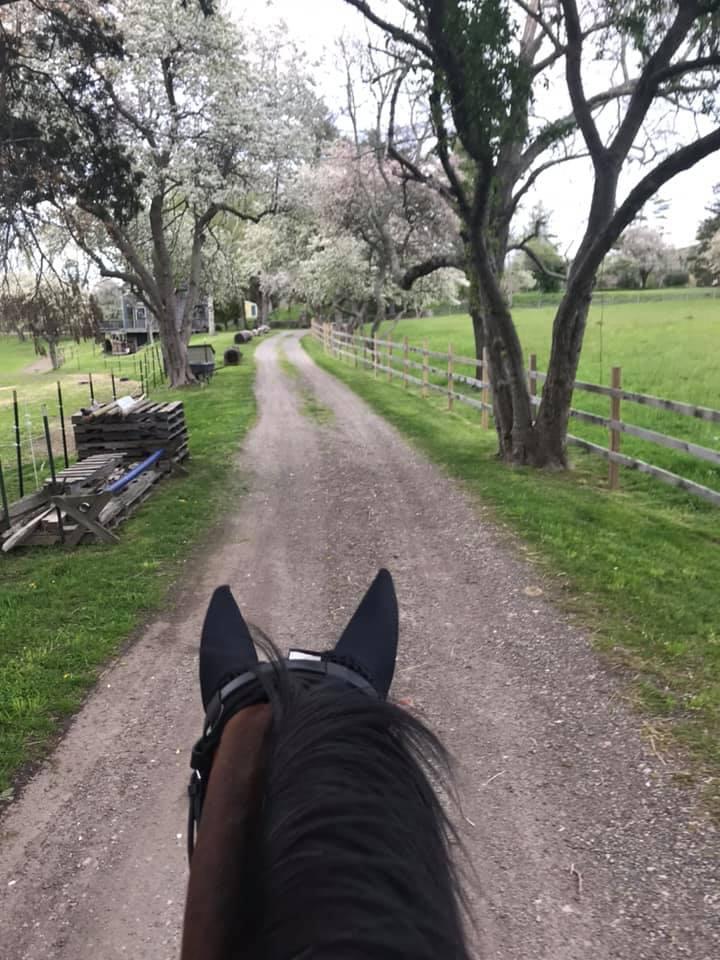 While I’ve done all of my mare’s training myself and she’s a wonderful trail mount, she can be a bit hot and spicy and some of my old riding anxieties pop up on occasion out on the trail. After a few reactive moments that neither of us handled particularly well, I realized I really needed to address some of my nerves and how they were making my mare more anxious. She’s so smart and she feeds off of my emotions and the emotions of who we are riding with. We had a few meltdowns over some run-ins with uncooperative dirt bikers out on the trail that had really shaken our little riding group, and I was having a hard time keeping my nerves about if we would run into dirt bikers at bay. That amped up my mare, and we were no longer enjoying our walks on the trail. She was stressed, I was stressed, our group was stressed, and it was just no fun for anyone.

After (finally) realizing that my nerves were the real issue, I went back to basics. I worked on the property with my mare and stayed where we were in a comfort zone until we were having nice, peaceful hacks around the barnyard. We worked on transitions, halts, lateral work, listening to each other, and getting back in tune. From there, I played YouTube videos of dirt bikes revving at the top volume on my phone while doing groundwork with my mare. This helped desensitize both of us, as just the sound of a dirt bike engine had gotten us on edge! When we were calm with dirt bike engines on the ground, I’d hop up and play them while riding. Once the sound didn’t bother me or my girl, we headed back out on the trail again.

One of my favorite ways to address my nerves about heading out on the trail is to find an easy, short loop that we can do over and over again until it’s boring. We did our favorite short loop that took us out in the woods for a half-hour and then called it a day when we could end on a good note. When that bored us to tears, we moved on to the next longer trail, and then off to explore the hundreds of miles of trails at the barn we were at.  We repeat this step when needed, such as when I recently moved my mare to a new barn. I also try to make sure that I go out with a friend who is calm and has a horse that generally won’t get worked up about if my mare spooks or gets a little hot. Having a friend who isn’t reacting to my mare’s silly antics helps to bring her back down to earth faster, and makes it easier to keep her in control compared to if her friend decided the invisible monster in the woods might also eat him! 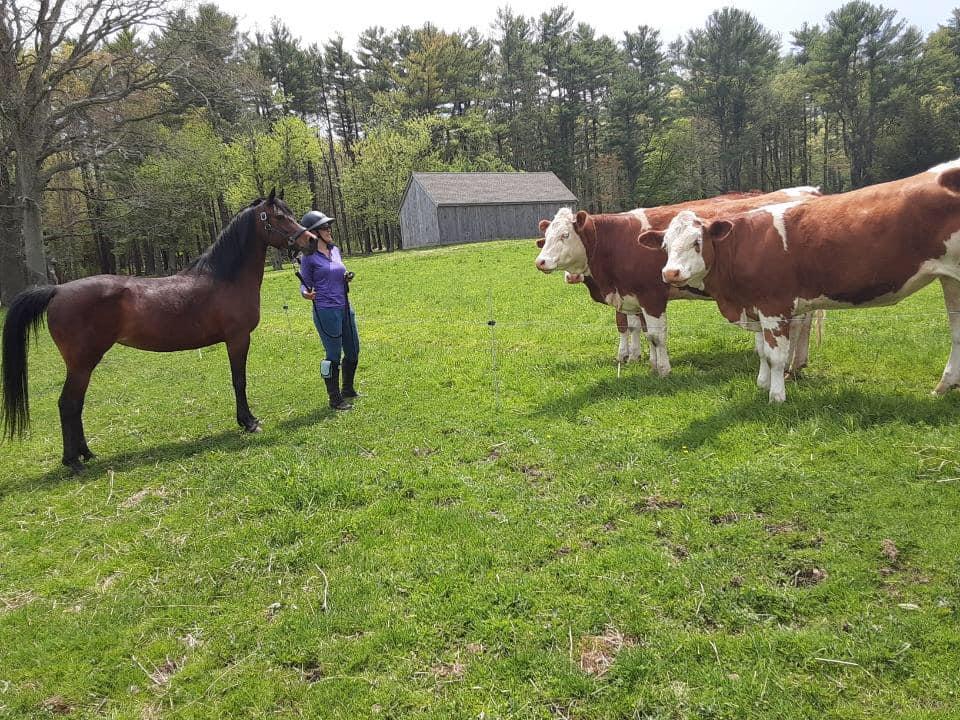 My mare and I are about eight years into our relationship together, and we know each other pretty well at this point. I have an idea of what might set her off at any time, and what I can ride her through versus what I should get off and hand walk her through. I don’t believe that getting off a scared horse is teaching them that if they act a certain way, you’ll reward them by getting off them. I do believe that some horses are easier to handle from the ground and some are easier to ride through their worries. My mare is not one that does well being ridden through a particularly scary experience. She is much more confident if I hop off and can walk her through or past something she’s pretty nervous about. She’s seen a lot over the thousands of miles of trails together, but there are times where even the most seasoned trail horse may get a little concerned. I’ve found that for her, getting off and calmly letting her look at something with me on the ground, and then walking her around or past it can really make a difference for her mentally, where riding her through it and trying to push her can result in a bigger issue. Once she and I are calm and happy again, I can get back on and continue our ride. I talk with her a lot when we do that, and I often sing quietly when I’m in the saddle riding through something a little scary so that I stay breathing and relaxed.

My last big tip for handling trail nerves is to just expose your horse to as many things at home as you can, keeping everything positive and calm. For example, my mare was pretty worried about a balloon we saw floating in the woods, so I bought some balloons and tied them to the fence near her feed tub.  I put her food down and let her snort at the balloon for a while until her desire for food overcame her fear of the balloon. That exposure at home helped the next time we saw one in the woods! We also now have to ride past cows, and my mare was absolutely terrified the first time we saw them. I have walked her over to see the cows several times, keeping the pressure off of her and letting her have the opportunity to look and smell them. The last time we went to see the cows, she started to graze with them! We still give them the hairy eyeball as we go past, but that’s a big difference from the squat and spin the first time we went by!

Since I know that noises in the woods can worry her (remember the dirt bike sounds?), I also use a silent ear bonnet or pom poms in my mare’s ears on days where it feels like it may be an extra spooky day or the wind might be blowing sounds around. I do everything I can to set my mare and myself up for success on every ride so that we are less likely to have nerves on the trail and more likely to have a calm, peaceful walk through the woods.